Learners are spoilt these days. I can say that because when I was one, the choice of bikes to legally ride was fairly limited. I was too old when New South Wales adopted the Learner Approved Motorcycle Scheme (LAMS) in 2002, but was envious of the choice of bikes that new riders could have.

Then seemingly overnight, the menu for learners around Australia had a style to satisfy every taste. There was everything from 650 motards to 400 enduros and mid-capacity scooters and road bikes. Where it did lack was in the choice of new, big-capacity machines built for learners, but that isn’t the case any longer.

This end of the learner market has a lot of machines to choose from, and for good reason. There are more than a few riders looking for a motorcycle today who have just got their licence, are capable riders and want to buy a new bike that they can use on their Ls and Ps and ride happily ever after.

The larger-capacity end of the market is the most hotly contested, with the range of machinery to choose from including both tailor-made machines for learners with optimised power and handling characteristics and restricted machinery based on full-power machines around the 650cc mark. The restricted machines typically are those that cause more of a fuss based on the reputation their full-powered versions give them. 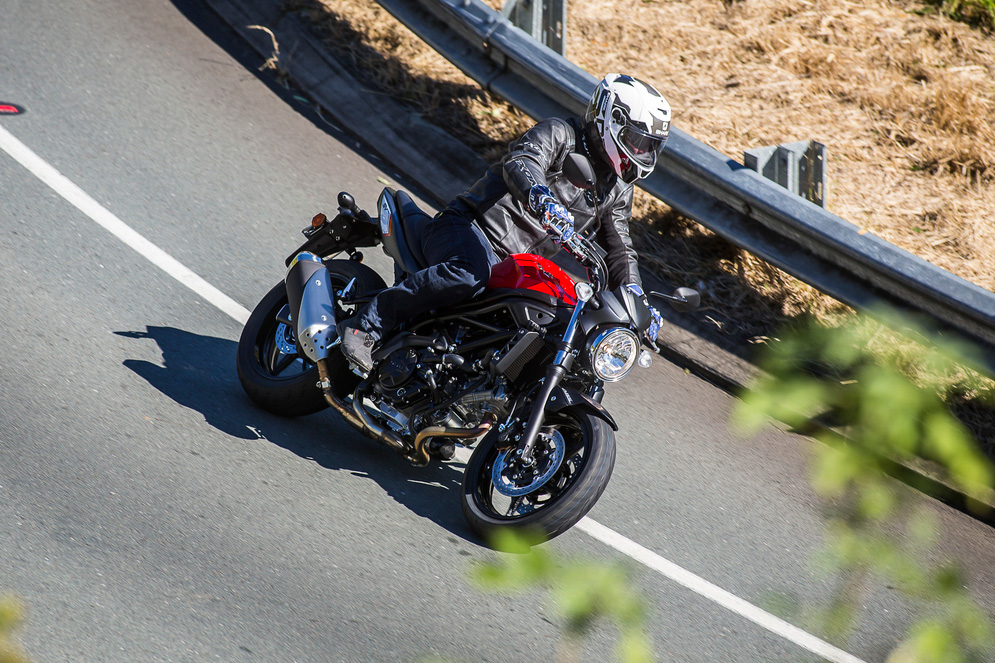 If there’s one machine that has been missed from this market segment of late, it would have to be the SV650. Thankfully it returns to the fray this year in place of the stylish and interestingly named Gladius. When Suzuki moved to the Gladius, it was a step in a gentler direction, a move away from the core of what made the SV650 so successful, but on the new model all that changes again. “The factory, in terms of the design concept, has gone full circle and the bike has gone back to its origins,” says Suzuki Australia’s Lewis Croft. “The mid-size learner market has grown — in Australia it has nearly doubled since 2013. Our market share has declined over the last few years as we decided to pull back on the SFV650, but with this new bike we hope to reclaim a lot of that market share as the new SV650 goes back to what made the original so good.”

So how has Suzuki done just that? First, with price, at $9990 ride away. You couldn’t buy the original machine and register it for that price, so it is better than the original already. Compared to the Gladius it replaces, it is $1500 cheaper, has ABS as standard, is lighter, has better handling, is better performing and better looking too — and not many people will argue. Most noticeable about the new SV650 is that the styling has gone back to the classic naked bike look with round headlight and minimal bodywork over a trellis frame carrying a 90-degree V-twin engine. Although it is small in its proportions — something short and novice riders will appreciate when manoeuvring the bike — it is still a striking-looking machine. 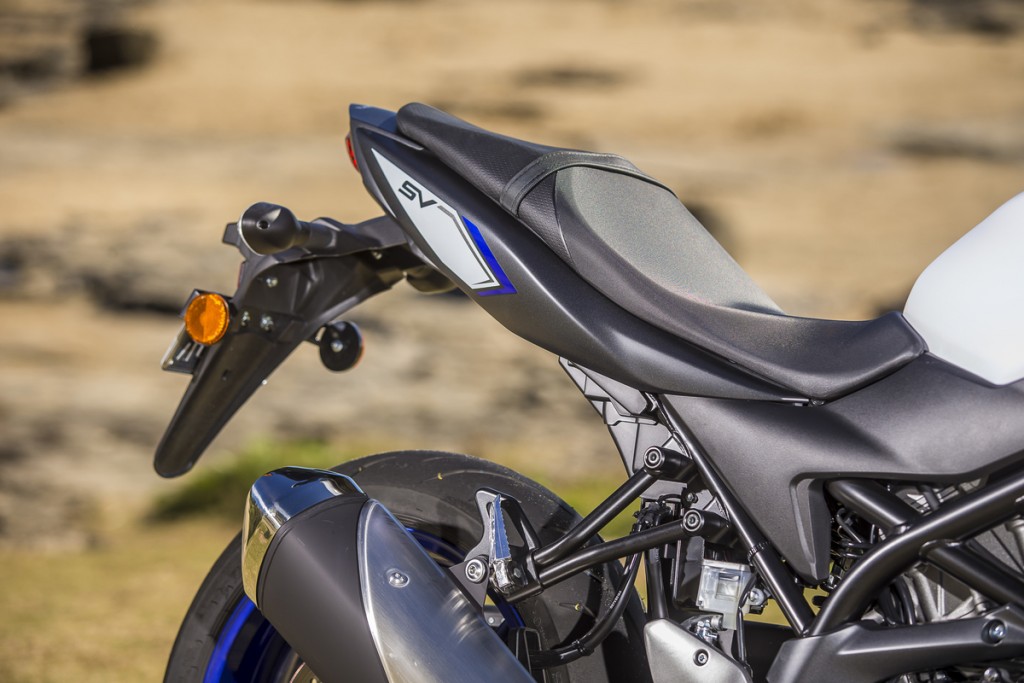 The heart of the SV is an evolution of the original powerplant that has featured in no less than 410,000 units. The first was the faired SV650S, followed by the naked bike a year later. In 2003 the boxier-styled SV featured the engine with fuel injection and carried it until it was updated in the Gladius. It also features in the V-Strom 650 in both learner-approved and full-power models. On that note, the SV650 is only coming to Australia in the learner-approved, low-power version — for now. If this engine wasn’t as reliable and durable as I say it is, surely you would have heard different elsewhere by now.

In the full-power-trim version we don’t get, the SV puts out 56kW of power. The torque benefit isn’t as impressive, with the full-power version putting out 64Nm at 8100rpm, whereas the Aussie-spec machine is all done with its 57Nm by 4000rpm. Torque is what’s important and Suzuki hasn’t lost much in complying with power restrictions for learners. The resulting engine character is the winner though. It delivers good drive at low rpm and at the other end of the scale, freeway speeds are easy to achieve and you’ll see 155km/h on the racetrack. Top speed isn’t a factor for this machine, though, and the lower end of the rpm scale is very well suited to the needs of a learner rider with strong, predictable, linear power delivery from a standstill.

Suzuki has gone a step further, cleaning up the bottom-end power by adopting a Low RPM Assist function. By monitoring the gear position, throttle position, rpm and clutch actuation, the ECU alters the ignition timing and throws in a few more rpm on take-off to aid the transition from a standing still/clutch in to clutch fully disengaged. This function isn’t a gimmick — you can’t dump the clutch and expect the bike to take off, but you can take off with no throttle at all and carefully ride the clutch out. For riders who remember learning to use a clutch or have ever taught someone to, this function is a great aid while learning a basic skill. Even experienced riders will clean up take-offs on the mid-sized twin to the kind of smoothness you get out of an in-line four.

Once on the move, the 645cc twin won’t get you into trouble with the throttle. Experienced riders will want more speed, but as a learner or developing rider you won’t be left wanting more from the V-twin on a tight twisty road, around town or out on the freeway at the speed limit. There’s a big, purposeful rev range and no need to frantically swap cogs in the six-speed gearbox that is straight out of the unrestricted SV, and as a result there are more than you need. If it only had a four-speed gearbox you’d be quite content with the performance in all conditions except the open road. Passing on single carriageways requires preparation and revs onboard to achieve safely, but it’ll get the job done well. So it should — Suzuki has been doing V-twins since the ‘90s and its application has always been done well in both the more road-focused V-Strom and SV formats. 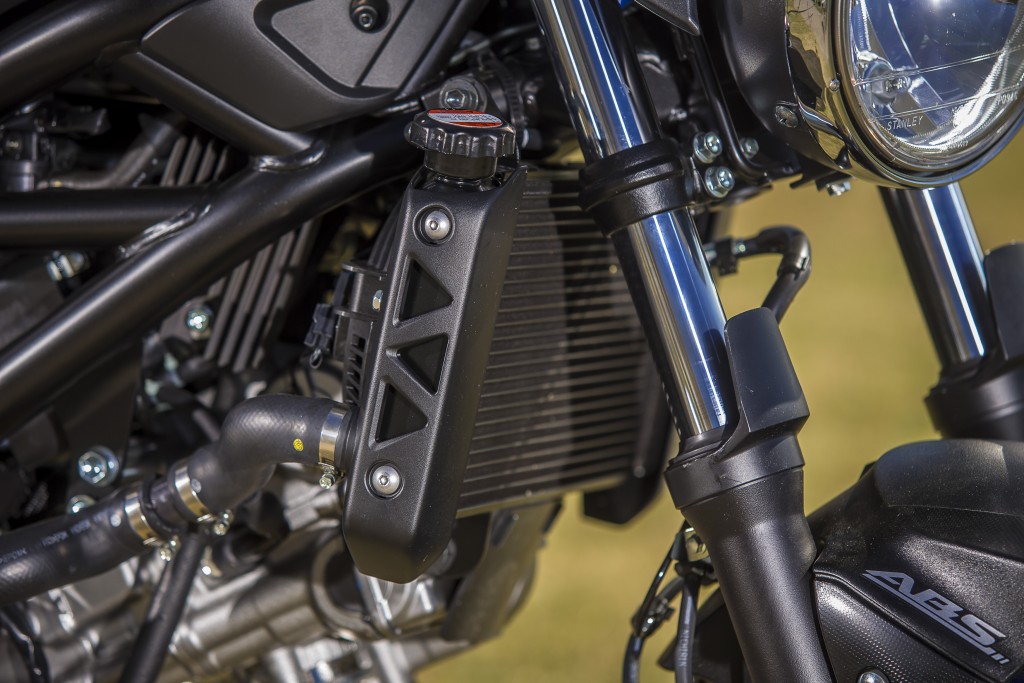 Along with an engine that isn’t stressed by the level of performance it has to deliver, another advantage of a full-power bike made learner-legal is that you get a chassis package that is more capable of dealing with what the engine can serve it. And when you are talking about another 20kW of power, that’s a lot more performance than the SV’s chassis is designed to cope with.

There’s a sportier feel to the SV in the handling dynamic than the Gladius. Steering is light, responsive, the suspension is supple, and when pushed hard in the corners there is little you can do to upset the chassis balance. In this regard, the SV chassis is the best-performing aspect of the new machine. Add to that sporty rubber, tyre sizes, superb twin disc brakes and ABS and you have an excellent-spec package — and I haven’t mentioned the price again.

The front-end is a non-adjustable fork while at the rear the shock has preload adjustment.  It is set up in standard trim for riders around the 75kg mark and even though I was carrying another 25kg, I felt no need for any adjustment out of the front or more preload in the rear. The actuation is very well controlled considering how comfortably it rides over bumps and doesn’t go to mush under heavy braking. From the GSX-S1000 comes the dash, the main difference being you can’t scroll between the different tacho designs. That’s of little importance to the SV owner and it still has all the extras like clock, trip meter, fuel consumption and range, but most importantly, the speed and gear notifications are easily read at a glance.

Looking at the styling, you can see Suzuki has done its homework — and perhaps history lesson — by going back to the essence of what the original, highly successful SV looked like. It should strike a chord with those who remember the first SV, but better still, by rolling in the original SV character and traits, this new machine will take it back to the head of the class.

As a restricted big bike it has a highly evolved chassis and engine built to deal with a lot more than it delivers. That bodes well in terms of performance, reliability and longevity — something the SV, and then the Gladius, have an impeccable reputation for.

As far as a learner rider’s needs go, the new SV650 has a low seat height, easily controllable power, ABS and excellent handling. Add to that the Low RPM Assist and the fact that it is less expensive than any other bike in its market segment, and you have the perfect machine to start your life on two wheels.

For a limited time, sportsbike customers can ride away on the championship-winning Suzuki GSX-R1000 ABS for a special promotional price of $19,990 Ride Away including a bonus Genuine Suzuki Bi-Directional Quickshifter. Totally redesigned from the […]