The performance of your suspension is critical to the ride experience you’ll get: handling, comfort and safety all depend on your shock absorbers and forks, but many riders don’t realise it.

Put simply, if you’ve never ridden a motorcycle with well-set-up quality suspension, you don’t know what you’re missing! Most riders start out on a cheap bike, with either new or (even worse) second-hand worn suspension. When they eventually get to ride a modern larger-capacity machine, they might find the suspension performance to be fantastic, but it’s generally still built to a price. Ride a bike with really good-quality suspension that has been set up for your weight and riding style and many riders never want to go back to a lesser machine.

The problem is that good suspension isn’t cheap. Only premium bikes have it and often even they fall short of the best available. That’s why the aftermarket suspension industry will always be with us, catering to riders willing to pay for the gain in comfort and handling it delivers. 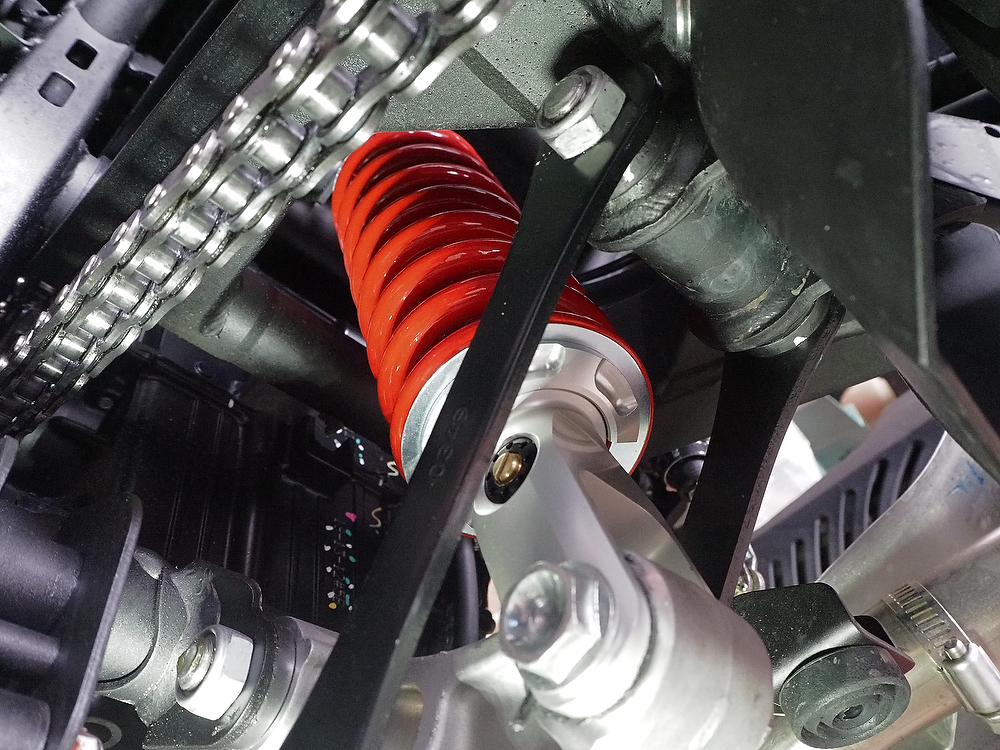 Riders can spend between $1000 and $4000 to upgrade suspension on an expensive, high-powered bike. The trouble is, not everybody has that kind of budget or rides a high-powered bike. Conventional thinking is that spending a couple of thousand dollars is overcapitalising on a cheap bike, although our esteemed editor reckons a Wilbers shock and fork springs transformed his $5000 Yamaha FJR1300 into a very comfortable, good-handling, heavyweight sports-tourer, making it safer to ride fast and less fatiguing to ride all day.

As it turns out there are some affordable suspension upgrades — such as replacing front fork oil with something better than the OEM fish oil supplied in budget bikes. Sometimes, quality second-hand shock/forks can be fitted. Changing springs often leads to improvement for unusually light or heavy riders.

The other option is replacing components with more affordable aftermarket parts. Asian manufacturers are now bringing cheaper product to market. A quick googlefaceweb search will bring up options, but the quality
and desire of manufacturers to stand behind their product is often unknown.

One manufacturer who does take quality seriously is YSS. It’s a Thai manufacturer and its products come with a two-year warranty and German TUV approval. Importantly, due to lower production cost, they’re cheaper than Euro products.

I have a Kawasaki Versys 300 as my dirt touring bike. It’s an honest performer with one of the better suspension packages in an $8000 bike, but there’s room for improvement. Suspensions-R-Us sold me a model-specific YSS shock with an RRP price of $499. It’s an entry-level emulsion shock with adjustable spring preload and rebound damping. Note: on emulsion shocks, adjusting the rebound also influences the compression resistance. Although it’s called rebound adjustment, its more accurate to consider it as a soft/hard adjustment. The quality looked good and the fit was excellent, slipping straight in to replace the OEM without any issue. YSS was off to a good start.

The sag (preload) setting was good and required no further adjustment. The rebound was quickly set after a run over my local bumpy road. It was backed off to the quickest (softest) setting, then gradually wound back in until only the occasional wallow was felt. Easy. Given it’s not a fully featured shock, I was hoping for an improvement but not expecting a miracle. Interestingly, brilliant performance would be a problem as the bike would be unbalanced. The front would feel comparatively terrible.

As it turned out, the YSS shock was perfect for the Versys. The ride did improve and the bike could now be better set up for load carrying, but the big gain was in rough corner stability. Tracking through potholes was noticeably better and the balance between front and back was good. Sharp bumps could still be felt, but it takes a premium shock with high-speed compression adjustment to mitigate that. It lifted the suspension to what ARR would consider par for a $15 to $18k bike.

YSS also offers a fork upgrade for $450 including spring preload adjustable caps, linear springs, and progressive, tuneable damping valves. Professional installation would be roughly the cost of a fork service. That’s usually around $200 if the forks are removed from the bike.

In the Versys’ case, the front isn’t too bad (especially after a fluid upgrade), and a fork kit wasn’t deemed necessary. However, on many bikes, the fork is the weak point, and fitting a kit may provide a bigger improvement than a shock.

If one was looking to take the Versys chassis to its full potential, a fork kit and fully featured shock would be the answer. However, that would cost over $2k and gets away from the original aim of “what can be done on a tight budget”.

YSS, it seems, is a good option to upgrade OEM shocks (or as a replacement for worn units) on sub $10k bikes without over-capitalising. For bigger, heavier bikes the starting price is around $599, which would be well worth a shot if you’ve got a high-mileage machine with worn suspension. It’s also worth remembering that second-hand shocks, in good condition, sell for around 30 per cent of RRP on ePay. Selling mine for $150 when it’s no longer required would bring the cost of the shock back to say… $350. That’s a pretty good bang for the buck in my book.

In conclusion, I’m happy with the YSS shock. For not a lot of money, it made a solid improvement to the bike’s stability and long-distance comfort.

PRICES: YSS fork springs from around $159. Rear shocks from $499. Phil bought his shock from Suspensions R Us.