In issue #157, we published a feature about Near varna, but we hadn’t read it at that stage. Here’s the review – below the picture is the original article.

Graham Field’s latest book, Near Varna, is a personal account of a motorcycle adventurer looking to change his life. It’s an interesting, engaging read, taken from his diaries across a number of years as he criss-crosses Europe a number of times while moving house: selling up in Essex, England and re-locating to Bulgaria, somewhere near a town called Varna.

So he called his house, and this book, Near Varna.

This is not a typical adventure riding book, more a personal memoir by someone with and interesting past who is doing something interesting. He ties it around the bikes, friends, family, jobs and lovers past and present with a healthy dose of weather, ageing, finances and language barriers. It’s subtitled “When you’ve found your Greener Grass – Pt 1. So if you’re paying attention, you’ll now know there will be a part two.

Field has done a great job of keeping the story flowing, something often hard to do with diary-based memoirs, because we all have periods where there’s not much going on which would interest readers. He keeps it light and humorous, although occasionally he’ll take you down a path to something deeper, usually an insight into the fickleness of people.

His honesty in his writing comes through, his disgust at the blogger writing fake products tests to fund her touring palpable. His descriptions of former partners and friends-with-benefits honest, possibly a bit brutal, although in many ways he’s hardest on himself.

I enjoyed Near Varna, finishing it quite quickly. I’m more than happy to read part two when it’s published. 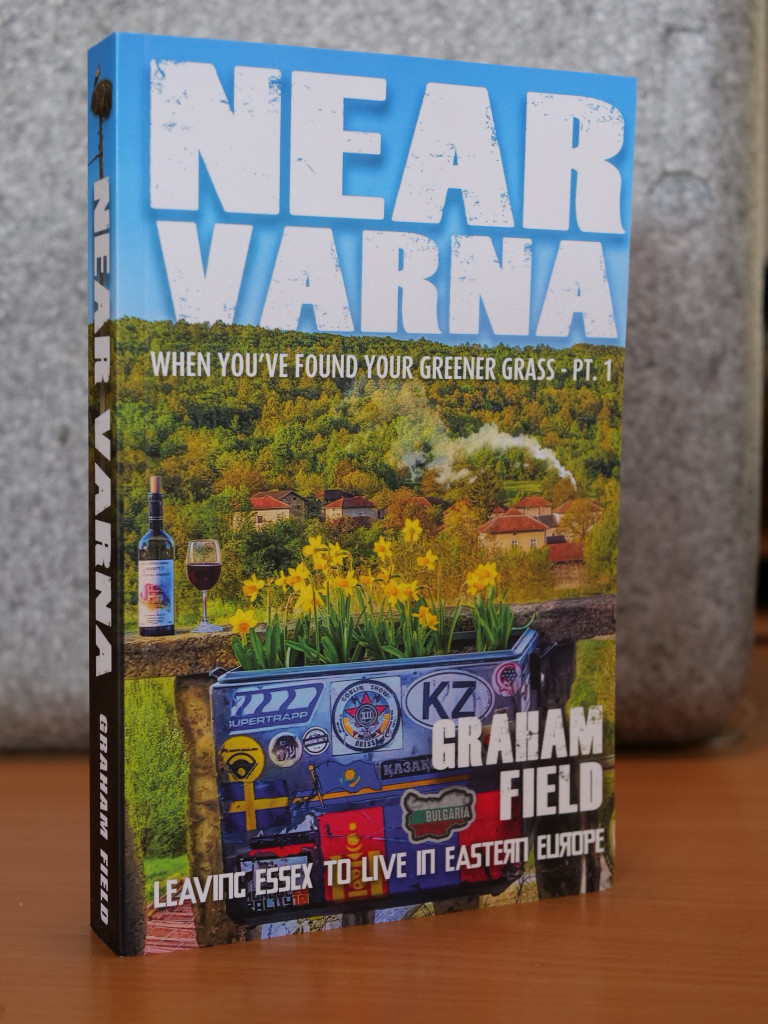 Graham Field is a bit of a British nutter. Obsessive, eccentric and a bit of a loner, Field became a motorcycle adventurer after winning £5000 on a TV quiz show, Deal or No Deal. He’d told the producers he would spent the money on a motorcycle trip which would “Make Charley and Ewan’s [Long Way Round]look like a trip to Tescos” (a Supermarket).
Once that line was announced on TV there was no going back. So he bought a Kawasaki KLR650 on eBay for £700 and headed off toward Mongolia.
‘In Search of Greener Grass’ was the book which resulted from that trip, which he backed up with ‘Eureka’ on the same bike, but down to Iran and Azerbaijan.
‘Different Natures’ was his third, three journeys over 12 years from the Alaskan Arctic Circle to Southern Mexico.
All those books are still available, but now his fourth is out.
‘Near Varna’ is the latest instalment in Field telling the story of his life – all his books are written in an honest, from-the-heart travelogue style.
It’s about riding, of course, but it’s also about relocating – he moved to Bulgaria. This is how Field describes the book:
“What we have here in Near Varna is the next instalment, another brutally honest and insightful diary in a lifetime of searching for contentment. A reckless gamble based on a gut feeling, giving up everything familiar and relocating. I found Bulgaria had an abundant lack of all the things I didn’t like. This is what happens when you find the courage to say ‘I don’t like it here anymore, I’m going to see what it’s like to live over there.’
“On Midsummer’s Day 2015 I embark on what I expected to be an unadventurous European tour with my KTM to present at a couple of Horizon Unlimited events, first to Northern Ireland and then ride across ten borders to Bulgaria. Almost immediately, and some would say inevitably, there were problems and the journey didn’t go according to plan. Facing imminent homelessness, I felt that the oyster my world had previously been was now resembling a mere shell of its former self. Decisions had to be made.
“This book is about the thrill of the first few steps in a new location, I ended up living in the European Union’s more easterly member, only 300 miles from the Asian continent. 25 years since the fall of communism it still felt in many ways like a place where east meets west. There was a lot to learn, not least the Cyrillic alphabet and Slavic language. I had moved to a world where I had become speechless and illiterate. This diary takes you through the haphazard transition of giving up on the land I was born into and discovering there is more to the transition than physical relocating. There were many ties from my previous existence that kept pulling me back. A lifetime of travel and something in the way I rode had bought me to a place near Varna, and I was ready to put down roots. The grass was greener and I had high hopes as my dreaded fiftieth birthday loomed on an inescapable horizon.
Graham Field’s books are available from grahamfield.co.uk and I bet he keeps a lot more of your money if you buy directly than if you get them from the internet monolith that started as a online bookshop. There’s also audiobooks, T-shirts, boxed sets and lots more.
Check out roadrider.com.au for a review of Near Varna – we hope to have read it by the time this issue hits the streets.