With 212hp pushing just 192kg, advanced electronics and aerodynamic winglets for control and penetration through the air, BMW’s new M 1000 RR is likely to be a sportsbike against which others will be judged. 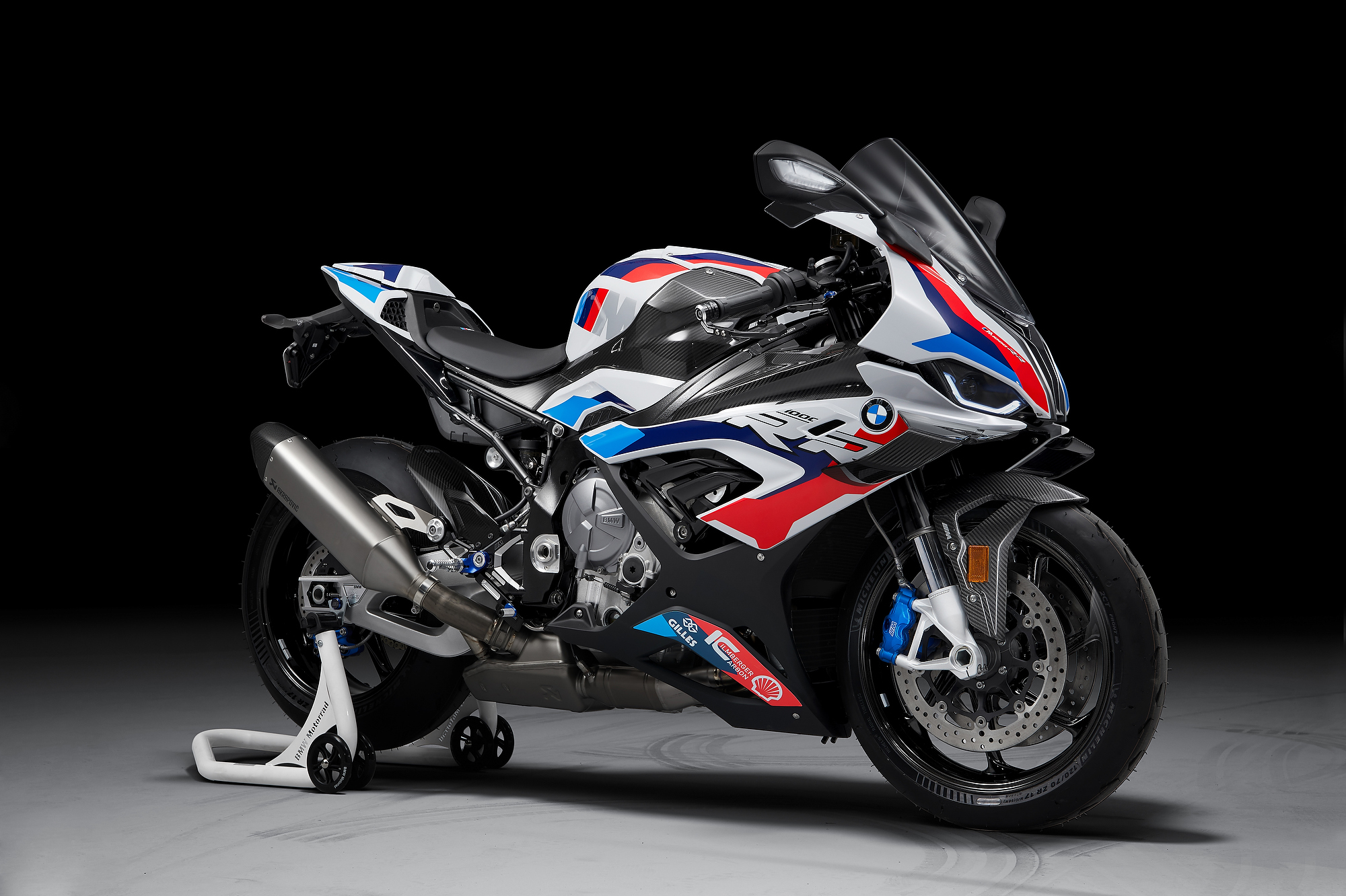 From its carbon wheels, BMW M-spec brakes, variable valve timing, titanium conrods, Mahle two-ring pistons and titanium exhaust, the M 1000 RR is special.
The motor develops more power than the S 1000 RR from 6000rpm to 15,100rpm, which will make it very fast on a racetrack.
Carbon aerodynamic winglets generate downforce to help keep the front wheel on the ground, allowing for even later braking.

The chassis is based on the S 1000 RR, but the suspension is quite different and the swingarm pivot is “optimised for use in motorsport applications”.

The chain has been lengthened by one link to increased the wheelbase for improved stability.
The TFT instruments are large and interface with the optional GPS data logger and lap trigger.
There will also be a competition package available for the bike.

Here’s the press release from BMW:

The all-new M 1000 RR – the first-ever BMW M Model from BMW Motorrad that was revealed today – will arrive in Australia in Q1, 2021.
The new model, or M RR for short, is a race homologation-special based on the all-conquering S 1000 RR but with a substantial power hike and numerous aspects directly adapted from BMW’s Superbike World Championship contender.
Its introduction as the first BMW M model is the headline development of a strategic partnership between BMW Motorrad and BMW M that has already seen launch of M equipment and M Performance parts for BMW motorcycles since late 2018.
Debut of the M RR also comes on the same day BMW M premiered its new BMW M3 and M4 high performance vehicles.
“Based on the current S 1000 RR, the product contents of the M 1000 RR were consistently aligned with the motorsport requirements from customer sport to WSBK,” said Rudi Schneider, BMW Motorrad head of S and K model series. “This will be clearly measured in lap times from 2021 on.”
Andreas Lundgren, General Manager of BMW Motorrad Australia, said release of the special new model would strike a chord with the local market.
“We are delighted to announce that next year we will bring in the M RR, the first-ever BMW M model that combines incredible race track developed performance and aggressive looks,” Mr Lundgren said.
“We are certain it will resonate with our fans and high-performance enthusiasts here in Australia.” 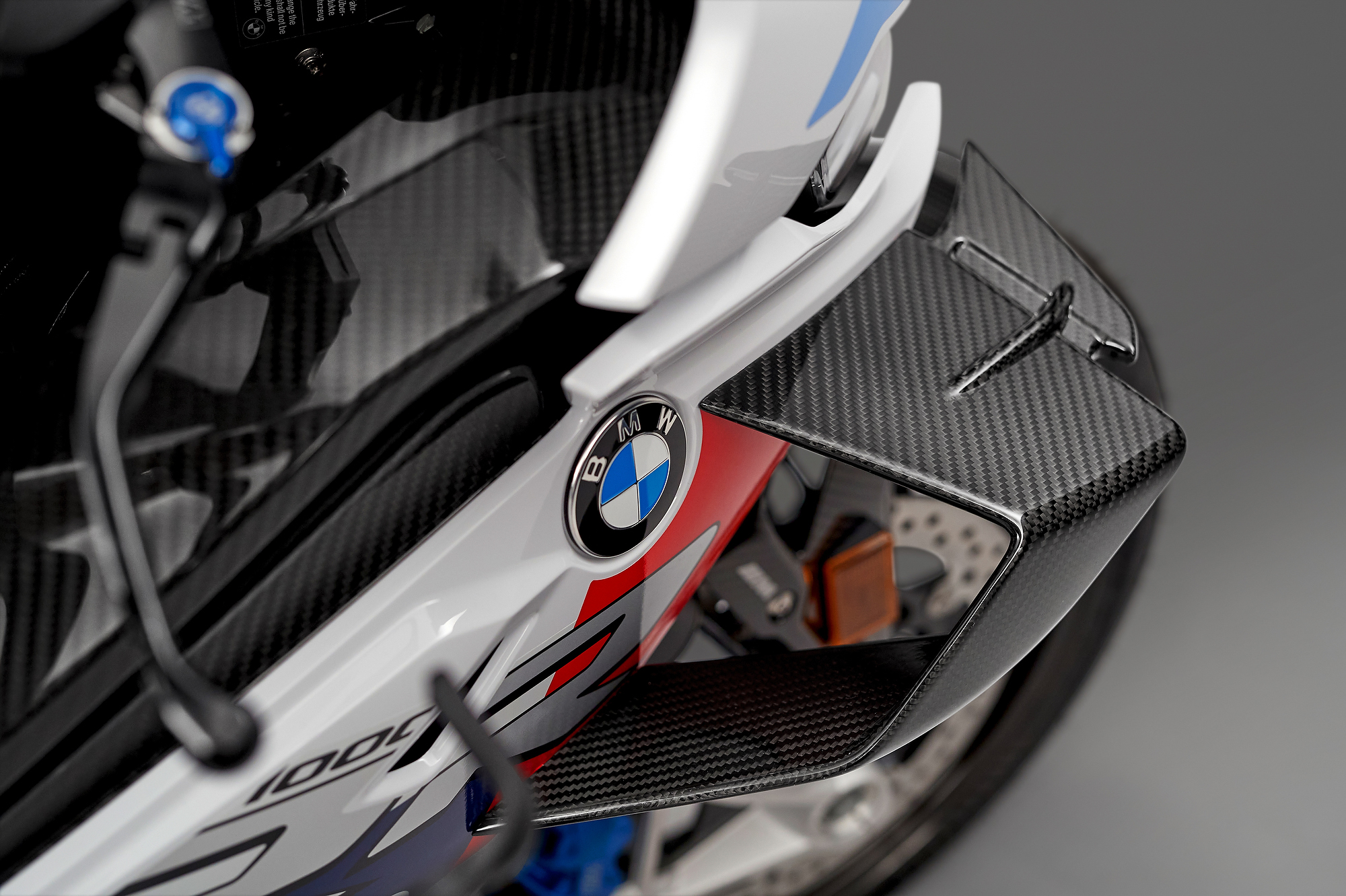 At the heart of the M 1000 RR is a highly tuned four-cylinder engine based on the S 1000 RR engine developed for racing.
It uses a water-cooled four-cylinder in-line layout with BMW ShiftCam technology for varying valve timing. Valve lift has also been modified comprehensively for track applications.
It achieves its peak output of 212hp (156kW) at 14,500rpm, while maximum torque of 113Nm is applied at 11,000rpm.
In addition to a maximum engine speed increase to 15,100rpm, the M RR engine has extensive technical optimisation such as new two-ring forged pistons from Mahle, adapted combustion chambers and compression increased to 13.5.
It also features longer and lighter titanium connecting rods from Pankl, slimmer and lighter rocker arms, fully machined intake ports with new duct geometry and enhancements for the camshafts and intake area.
The exhaust system is also made from titanium, which delivers a weight reduction of 3.5 kilograms compared with the unit fitted to the S 1000 RR.
The new M RR engine is more powerful than the RR powertrain from 6,000rpm to 15,100rpm – a range that is particularly relevant for race track riding dynamics – but without losing its qualities as a source of power for focused riding on country roads.

In addition to achieving maximum speed, establishing the best possible contact of the wheels with the road especially when accelerating was another key dynamic objective.
The M winglets on the trim front, which were developed during intensive testing on the race track and in BMW Group’s wind tunnel and which are made of clear-coat carbon, produce aerodynamic downforce and thus additional wheel loads according to the speed.
The additional downforce developed at speed is significant, with 13.4kg generated on the front axle and 2.9kg on the rear at 300km/h.
The additional wheel load on the front wheel counteracts wheelie inclination, traction control regulates less and more power is converted into acceleration.
The effect of the winglets is also noticeable in curves and when braking with the higher levels of downforce allowing for later braking and increased cornering stability.

Chassis tuned to perform at the highest level 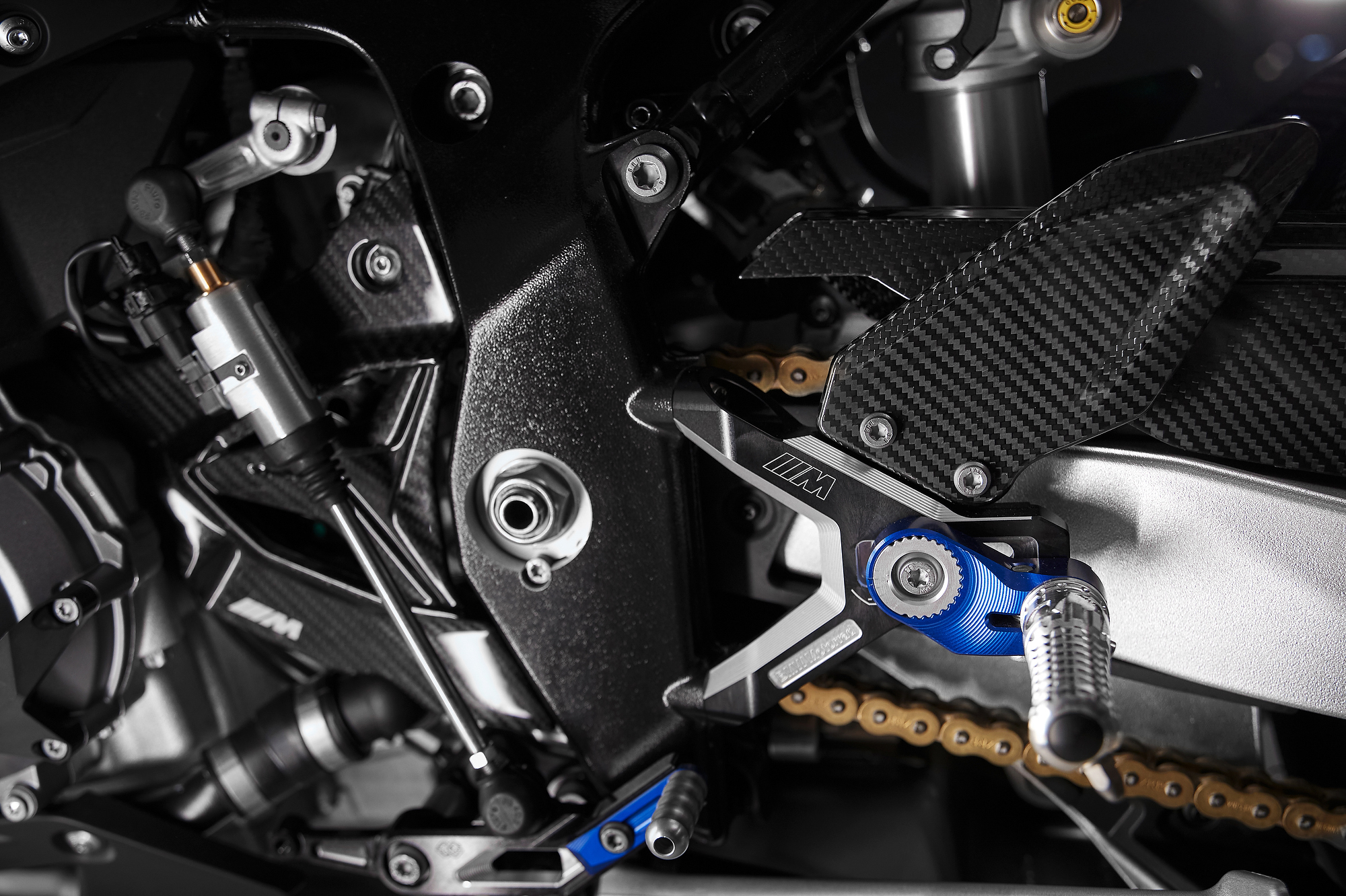 The chassis of the new M RR is based on the S 1000 RR with a lightweight bridge frame.
The suspension strut is bespoke to the M RR for unadulterated race performance and replaces the 87.5mm threaded rod unit of the S 1000 RR.
The strut is an eccentric strut type with an initial length of 78mm and an adjustment range of 6mm in seven 1mm increments from 75mm to 81mm.
The linkage ratio has also been increased from 1.63:1 of the S 1000 RR to 1.97:1 – a move inspired by experiences of the race track accessories market.
The spring rate is 100N/mm and a new spring steel has been adopted to reduce weight. In addition, the swing pivot point has been optimised for use in motorsport applications.
Adjustment range is from -2mm to +2mm in 1mm increments – a new feature developed for the M RR.
The chain and thus effective swinging arm length has been extended by one pair of links, resulting in a revised wheelbase that provides the M RR a solid grounding.
The M RR delivers highly adjustable performance characteristics for both race track and back roads while providing the rider with exceptional feel thanks to aspects such as brake and starting pitch compensation. 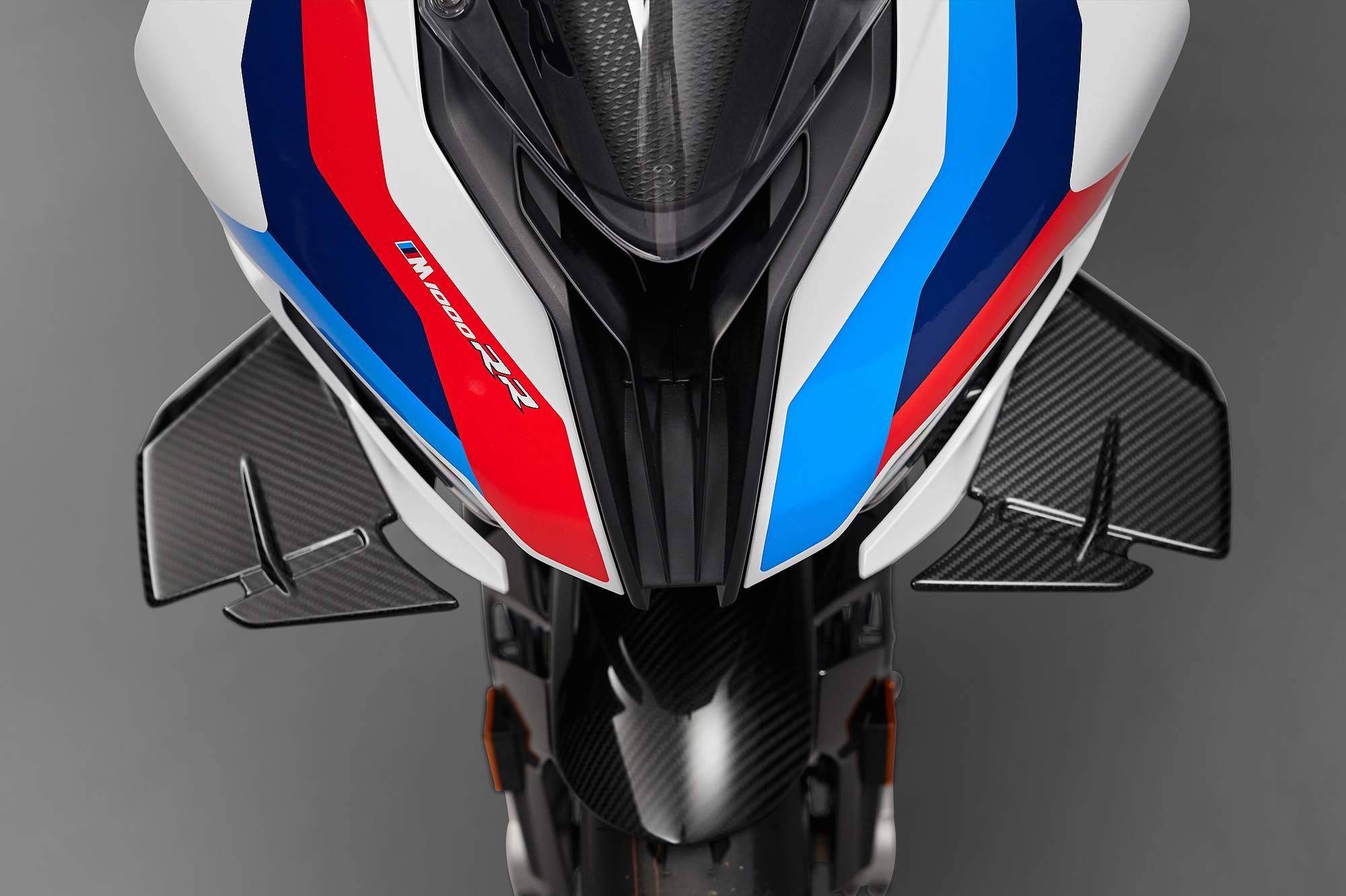 In addition, the top and bottom fork bridges are entirely milled, black anodised and are approximately 20 grams lighter than those used on the S 1000 RR.

Debut of BMW M brakes and carbon wheels as standard

The new M RR is the first BMW motorcycle to feature an M brake system.

The system was developed directly from brake designs on BMW Motorrad racing machines in the Superbike World Championship and provides maximum fading stability and controllability.

Externally, the M brake calipers have a blue anodised coating in combination with the M logo.
M carbon wheels, which are fitted as standard, provide additional stiffness while lowering unsprung weight to increase performance potential. This also changes front wheel load distribution from 53.8 per cent of the S 1000 RR to 52.1 per cent for the M RR.
High definition displays deliver clarity on the limit
The M RR’s instrument cluster features a high clarity 6.5-inch TFT display and OBD interface that can be used with an activation code for the M GPS data logger and M GPS laptrigger.
An activation code, which comes as standard, provides comprehensive data material for the use of the M GPS laptrigger and M GPS data logger (Original BMW Motorrad Accessories) via the OBD interface of the instrument cluster. 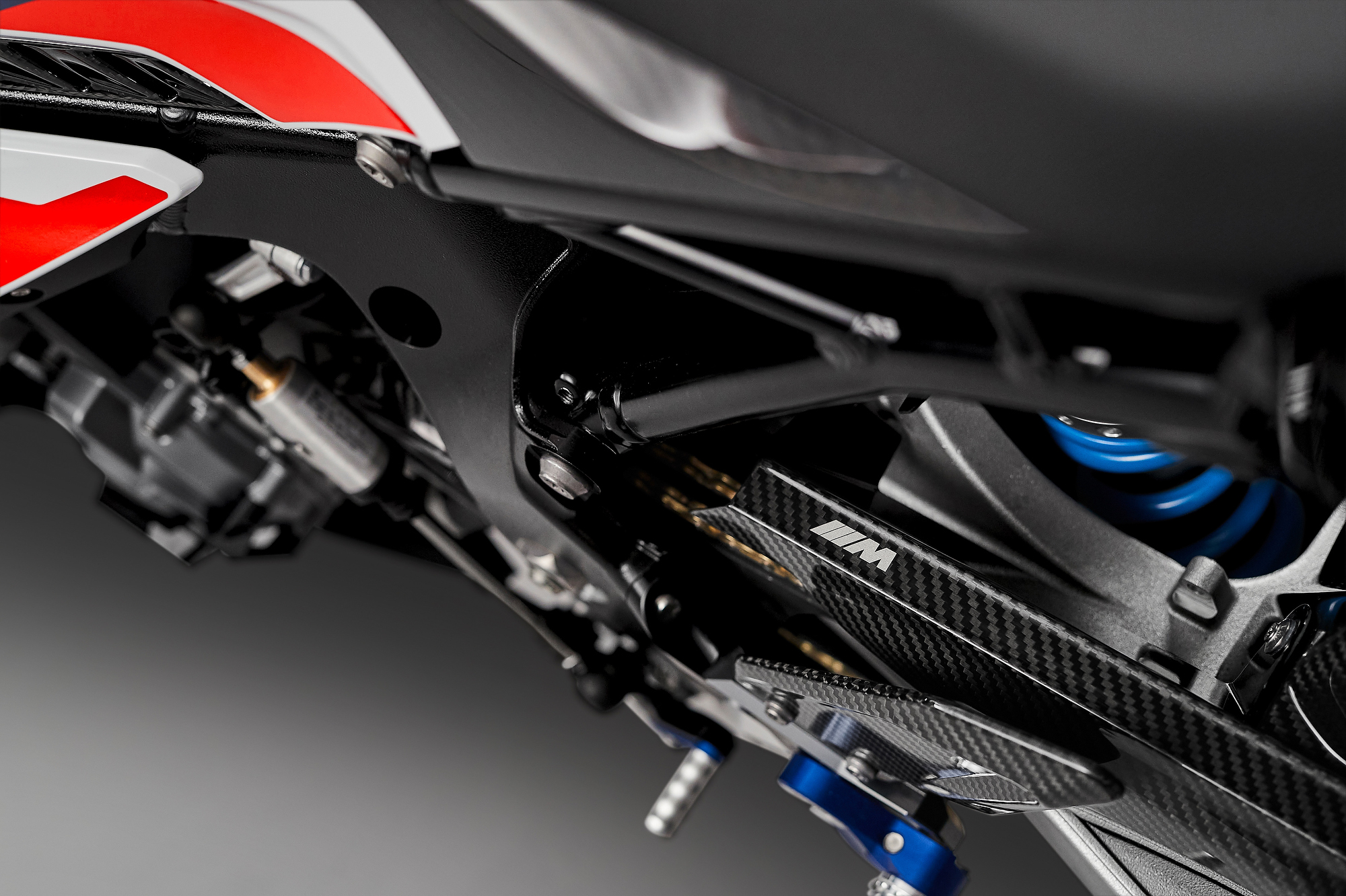 The new M RR emphasises its racing genes with the light white solid paint/M Sport colour scheme in the basic colours light blue, dark blue and red. Other aesthetic features of the M RR are the engine covers in granite grey and the fuel filler cap painted in black.
Competition package ups the stakes
The M competition package provides a combination of elements that seamlessly bring racing technology together with dynamic aesthetics.
In addition to the M GPS laptrigger software and the corresponding activation code, the M competition package also includes an M milled parts package, M carbon package as well as a silver 220g lighter swinging arm, the friction-optimised, maintenance-free and DLC-coated M Endurance chain and the passenger package including tail-hump cover.
Further specification detail and local pricing information for the first-ever M RR will be announced closer to the Australian launch in early 2021. 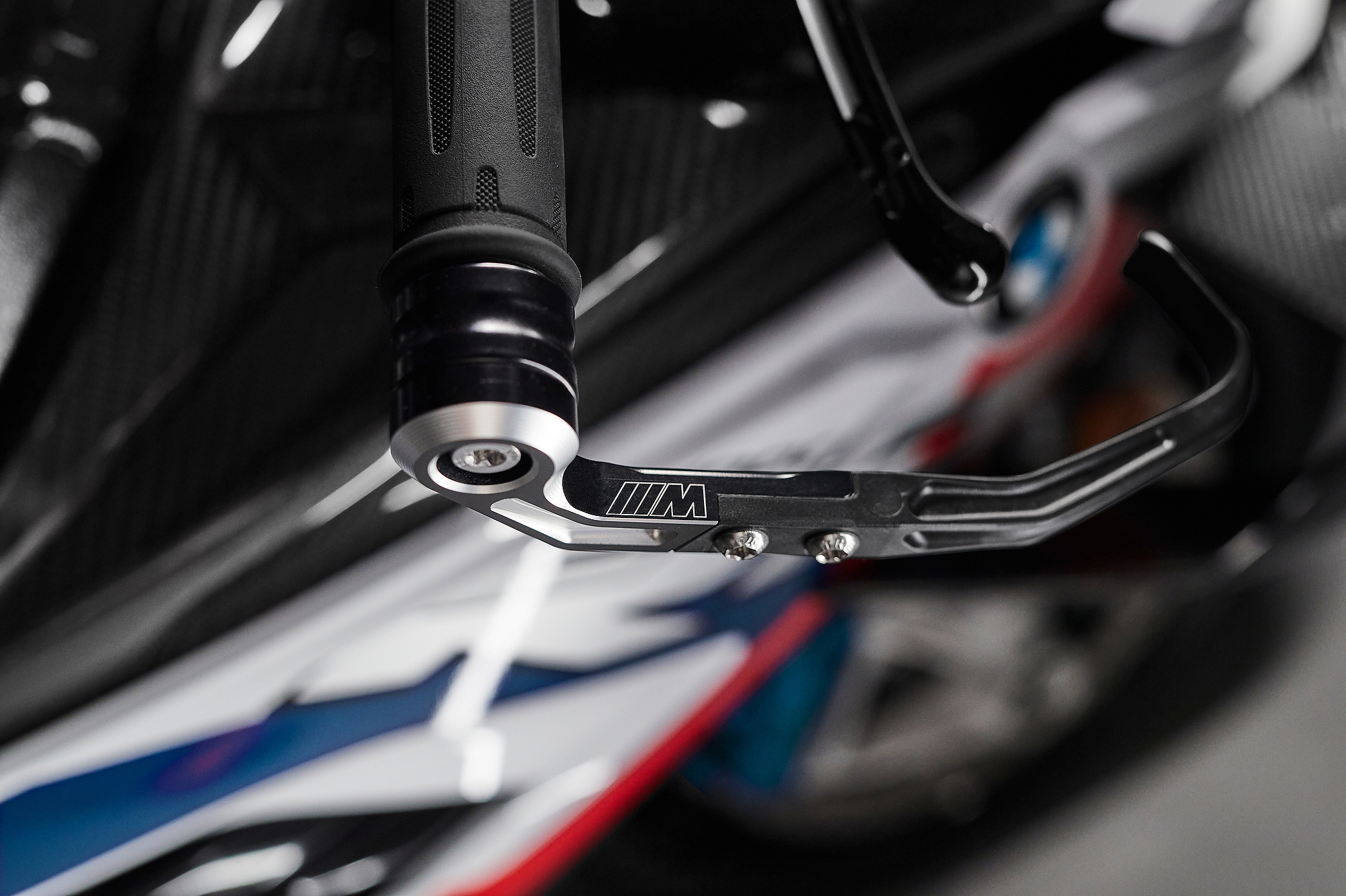 BMW has announced a pair of fairing and hard-case equipped cruiser/tourers for 2022 based around the Big Boxer-powered R 18. The R 18 Transcontinental and R 18 B are German bikes built for American touring. [...]