This beautiful bike, a customised Royal Enfield Classic 350, ‘Dark Genesis’ is a rolling billboard for its builder, Carlo Hallacq. Carlo’s been around the industry for years, and recently he launched Carlo Hallacq Design, a boutique motorcycle design studio, building this Royal Enfield to show how he can create stylish customs without spending a fortune of your money. It helps when his starting point is a brand new RE 350 Classic costing just $6490. 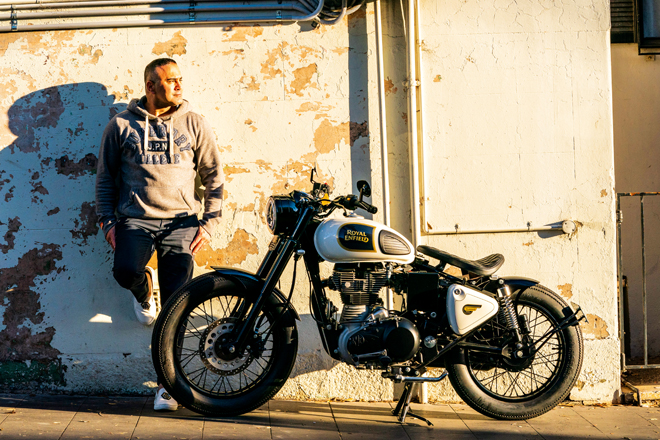 “I know that there is an urban market who are time-poor yet demanding of excellence in the final product. We can execute their vision through our own creative design studio and the technical expertise of our trade contractors. The end result is what I call emotive art,” says Carlo.

With its masculine stance, Carlo’s Enfield is a real head-turner. The bike sits in Carlo’s house, on display as a ridable piece of art. “Art comes in many forms and to me this is a form of art,” he says.

Hallacq’s background is in creativity, engineering and business. He was raised to believe in himself and through hard work and talent, excelled through school, then as an apprentice (he was twice BMW Apprentice of the Year) and later invented and patented a high-tech key system which would offer different levels of control and security to different users of the same vehicle, similar to what Ford now offers with its ‘MyKey’ system.

As a boxer he even took a shot at the Olympic Games, missing out to the eventual Australian representative Jamie Pittman. Hallacq went on to establish and sell rental car companies before studying law and moving into property development and private equity. 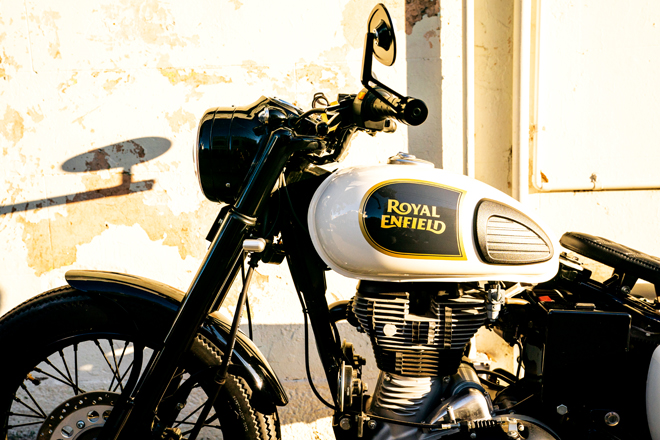 So, as a successful businessman, he doesn’t need to build bikes, but as he told Retrobike, “I love bikes and I’m passionate about bikes. This is my vision and I’m happy to share my vision and help people.

“I have now established Carlo Hallacq Design in appreciation and love for automotive and mechanical art. For me, at an elite level, mechanical creations are an art form not only in luxury goods such as watches but also in the automotive arena, witness the Pagani (sports car and carbon-fibre manufacturer).

“I also wanted to create a bike that is affordable, as I know what customs can cost and that is well out of the reach of the common enthusiast.” That said, Carlo didn’t hold back with this particular bike — it was comprehensively stripped and many components powder-coated before careful re-assembly.

Carlo chose the Classic because it’s almost plastic-free out of the box, is extremely affordable in its raw form and is really well-suited to customisation. “I’ve always respected Royal Enfield because of its history. I chose the 350 because it’s a throw-back to an earlier time. This could be the last hurrah for the mechanical gasoline era. 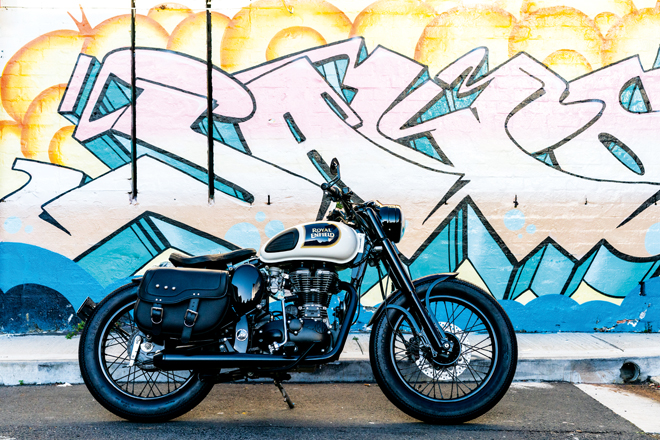 “You can appreciate the mechanical aspects of this vehicle, something essentially unchanged for 60 years. I want everyone to enjoy the last of the mechanical machines before the electronic era takes over.”

Hallacq is keen to work with riders to create their vision through. “The Classic is a ‘beta test’: I’m keen to see what sort of reaction we get to the bike.” He is open to working with riders of different brands.

The first task was to choose a style, and making it into a single-seat urban custom was a great idea — after all, the Classic 350 is Learner Approved, and learners can’t carry pillion passengers, so why not? The seat base was modified and new upholstery added for the old-style saddle look and feel.

To give the bike a bit of a lightweight look, both front and rear guards were shortened, while the blacked-out finish of the wheels, spokes, forks and guards give the bike street presence. The powder coating is high quality to retain its lustre for many years. The headlight surround, handlebars and bar-end mirrors are all also finished in black to keep the ‘Black Genesis’ theme happening. 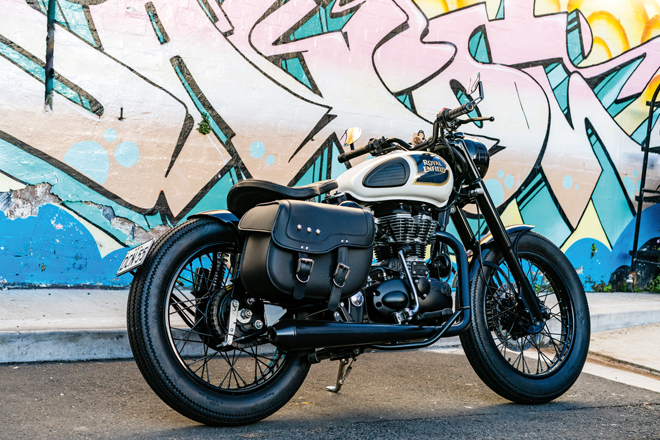 The paintwork is designed to be unique, with a classic style. It’s easy to believe how many people — riders and non-riders alike — might mistake the machine as a well-kept classic. To keep the bike legal but looking good Carlo has added small PBM indicators, which need to be looked for to be spotted.

The standard headlight has been switched out for a modern LED unit while at the rear the indicators do triple duty, functioning as tail and brake lights too. The LED lighting even extends to the number plate, which is mounted on a LED-equipped surround. In keeping with the classic style, Firestone tyres have been fitted.

The twin-spark single-cylinder engine has been left standard, but it performs better thanks to better breathing from the pod air filter and short hot-dog muffler, which also improves the acoustics, giving the bike an appealing note. The carburettor (remember them?) has altered jetting to suit the freer-breathing nature of the engine. The urban nature of the bike screamed out for the ability to carry the day’s essentials, so a single leather saddlebag is mounted, blacked-out like so much of the running gear.

One of the things we really like about Carlos’s Classic 350 is its approachable nature — it’s a great entry into the world of custom motorcycles. Of course, when you order your own you can get one just like this, or have Carlo build a machine which suits your style. “We expect to be attractive to the younger market, something that’s cool, but isn’t looked on as a learner bike.”

By Nigel Paterson. Photos Paterson & Suzuki Australian Road Rider attended the recent launch of the Suzuki Katana we’re impressed! Make sure you get issue 153, out in November, for the full, detailed test… It’s […]

Being a great rider … in theory!

The Far Island Fox Hunt: On theory versus implementation. Perhaps you are one of the many who have, or will, return to riding after a reasonable spell. It’s a time that may bring with it […]

Sportster range expanded by the addition of the Forty-Eight Special and Iron 1200 Set to hit showrooms in late April, the new H-Ds are the latest of 100 new models the Motor Company plans […]