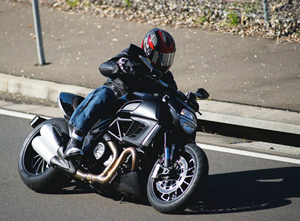 Finally, we have got our hands on the new Ducati Diavel for you.

There have been so many orders for the Diavel that Ducati Australia couldn’t even put on a demo unit for the public, let alone give one to the hungry press to review. But we got one and, boy, was it worth the wait!

We’ve named it the Urban Assault Vehicle as it will assault your mind, heart, eyes and ears — and bystanders will be put on notice by both the ear-pounding thump and the Diavel’s outlandish style.

The name Diavel (pronounced dee-AH-vel) comes from the local dialect word for “devil”. Apparently, when it was wheeled out in front of a group of Ducati engineers and technicians for the first time one of them blurted out in Bolognese dialect, “Ignurant comm’ al diavel!” — meaning, “Evil, like the Devil.” You can make up your own mind.

Sport Mode
Just crack the throttle in Sport Mode and it launches you forward with gusto. You get full power and full-on throttle response for maximum acceleration. For the full taste of all that power, the Sport mode also lowers the DTC (Ducati Traction Control) system intervention to level 1 for riders who prefer their performance a little closer to the traction limit.

Touring Mode
The Touring Mode is also programmed to produce full power but gives a smoother, more user-friendly power delivery. Rear-end traction is enhanced by increasing DTC system intervention to level 4 and is intended to give an enjoyable and relaxing ride. This mode is ideal for long-distance riding and ensures maximum comfort for both rider and passenger.

Urban Mode
As riding on city streets can require more attention to the surroundings than to throttle inputs, the Urban Riding Mode instantly changes the Diavel’s character to provide a manageable and confident ride. Power output is reduced and DTC is further enhanced to level 8 to provide a higher system intervention during the most chaotic of stop-start traffic. Truthfully, Urban Mode felt like a bit of a waste to me: why have such an aggressive-looking machine and not have the full whack of power?

It won’t surprise you that 95 per cent of the time I rode the Diavel in Sport Mode but after the initial fun factor wears off I think I and most riders would set it on Touring mode to get better fuel consumption — our result of 8.37L/100km doesn’t get you too far.
Music to the ear 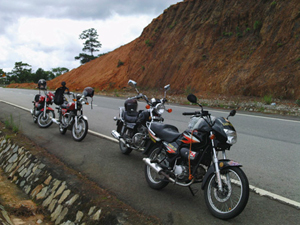 This leads me onto the ear-pounding, heart-thumping sound coming from the massive 58mm section exhaust headers that lead into the two-one-two system through power-enhancing equal lengths that give the Diavel such effective power delivery. I suspected Ducati Australia had taken some of the baffling out, because at idle it’s extremely loud and once you wind on the throttle you get even more L-twin roar.

But who knows? There is certainly no reason to put another pipe on the Diavel other than for show. To pass noise control limits, Ducati engineered an electronic flap that cuts noise at just the right revs.

Ride and instruments
A heavily sculpted seat locks you into position for your attack and the flat tapered bar looks cool and gives an aggressive riding position. I found the riding triangle to be comfortable to 140km/h or so and, if you really had to, touring would be OK.
While the Diavel is a serious muscle cruiser, it will tackle sport and touring riding with aplomb.

Supplying the information are two separate instrument panels. The lower one mounted on the tank is a thin film transistor panel that supplies information about which gear you are in, current fuel consumption, odometer and current riding style (Sport, Touring, Urban). While it’s ultra clear and easy to read, it requires you to dip your head, taking your eyes off the road. 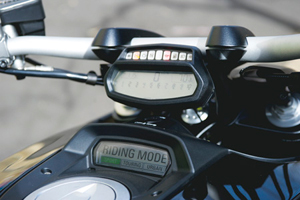 Smart key
Like the new Multistrada 1200, the Diavel has an electronic perimeter key that communicates with the motorcycle when you’re within two metres.

The motorcycle recognises the dedicated key code and automatically enables the bike’s systems. Pressing the key-on switch then activates all systems to “On” and the engine is ready to be started. The electronic key doubles as an external mechanical flip-key for the seat and fuel cap.

When parking the Diavel, an electronic lock can be actuated on the steering head simply by applying full steering lock and pressing the ignition-off button a second time. This does take a bit of getting used to but persist and you’ll like it.

Those wheels!
Attention-getters include that 240mm rear tyre and the custom-looking 14-spoke milled detailed wheels. The Ducati engineers were given free rein and obviously believed an aggressive bike like the Diavel needs a fat rear tyre, in this case a specially made Pirelli Rosso Corsa II complete with accents around the side of the tread.

Usually, bikes with such a wide rear tyre understeer like mad, but come the first corner I pushed on the bar and zip! — round it went quite competently. So the next few corners I pushed harder and harder and found the Diavel tips into corners well and rides bumps and holds its line nicely. I apologised to the Diavel for thinking otherwise and then it was off to play in some real twisties.

In a series of left-right 55–65km/h corners the Diavel didn’t complain no matter what speed I chose, but I did run out of ground clearance on one corner, shaving down the left peg and bending the gear lever, so be careful about those low pegs.
Brakes

Brembo braking components with ABS adorn the Diavel. During my first ride I thought the brakes lacked stopping power, but once they got some heat into them they changed dramatically.

There is plenty of power on offer and loads of feel from the front. I did find the rear lacked a touch of feel; maybe some different pads would fix this. The ABS is non-intrusive and a good safety item to have on such a powerful machine.

Gearbox ratios work well, giving punchy acceleration away from standstill, and the ratios are close enough to keep the Diavel in the fat power curve to keep the fun going. Clutch weight is medium.

One thing you notice immediate about the Diavel is its level of fit and finish over other Ducati models. The company has gone the extra mile with this one and it’s great to see. Panel gaps are tight and the finish on the paintwork is a deep lustre. I also really like the milled detail on the wheels and “Ducati”-inscribed clutch and front brake reservoir caps.

There are a few accessories on offer but, to be honest, about the only things I would do would be change the mufflers to a set of carbon units (for looks only) and I would look around for a milled or billet-type rear number-plate bracket; the standard one looks a bit weird.

If you are a (fast) attention-seeker, look no further — you’ve found your weapon of choice.
SW

Ducati Diavel Carbon
The 207kg Diavel Carbon is three kilos lighter than the standard Diavel and really displays the true nature of the Diavel concept: performance, style and Italian engineering at its best.

The Diavel Carbon comes in “Red Carbon” (gloss red over matt carbon) with red frame or “Black Carbon” (both gloss and matt-black carbon weave) with black frame. Both Diavel Carbon versions roll on black wheels, turned and milled to expose the natural aluminium below.

While carbon fibre is used for the tank panels, single-seat cover and front mudguard to reduce weight and apply the racing spirit that runs deep in the DNA of Ducati, a low-friction diamond-like carbon finish gives the Marzocchi fork sliders a spectacular black gloss as well as performance-enhancing action.

Helping the Diavel Carbon to accelerate faster, stop sooner and change direction with even more agility, Ducati saved 2.5kg of unsprung weight by switching to beautifully forged, lightweight Marchesini wheels. The wheels are machine-turned and milled for maximum weight reduction and stunning looks. Black disc carriers go through a similar milling process to save weight and the natural aluminium contrasts beautifully against the original black carrier. Now you have an even more difficult choice.