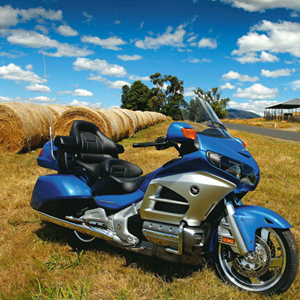 Let the ’Wing soar even higher

Sometimes it seems as if Honda’s GL1800 Goldwing has been around since Adam was a pup. Since its debut in 1975 as the GL1000, the Goldwing has been acknowledged as the pinnacle of two-up sealed road motorcycling, a machine with the power, refinement and reliability to tour even the most far-flung destinations in complete comfort. The name “Goldwing” has become synonymous with long-haul power and touring sophistication. While undergoing continuous refinement with the addition of things like stereo systems, warm-air ventilation and airbag technology, the Goldwing’s designers never lost sight of the fact that big-distance riders demand big-hearted performance.

Over the years, the bike has changed shape and evolved into a bit of a cult object among serious touring riders. The immediate past model Goldwing, however, had been in the market since 2001 and was long overdue for a freshen-up. Hence this 2012 launch of the “new” Goldwing.
The first thing you will notice are the changes to the sides of the fairing. Actually, the design of the fairing has given the 2012 Goldwing a more integrated style, front to rear, making it look sharper. A reshaped rear tail light further adds to the distinct new look.

The front of the fairing has been designed to better protect the rider and passenger. Computational Fluid Dynamics (CFD) analysis helped sculpt the fairing to effectively reduce buffeting around the lower legs, especially the passenger’s. 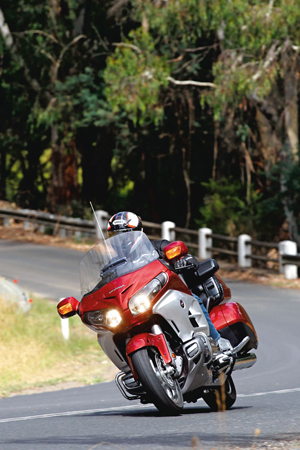 New air vents have been built into the rear bodywork to reduce negative pressure that forms at the back of a motorcycle, with reasonable enough claims that this improves stability. Improvements to the front and rear suspension have also improved the ride, complementing the new aerodynamics.

Having lived with one of the previous Goldwings for a number of months when we had one as a long-term loan bike, I can say that handling is much improved. No longer is there the harsh thud over imperfections in the roadway and it does feel stable at speed, so I will take Honda’s word that the new design works well. Another contribution to a smoother ride is the fitment of new low-friction bushes in the rear and low-friction dust seals on the front forks.

Low-speed stability is a touch better, and this is another thing I found a bit tricky when we had our long-termer. Honda put this down to a change in the front axle shaft. The Wing’s handling definitely feels better at low speed, primarily because the bike feels better balanced. Don’t be lulled into a false sense of security, however: this is a large motorcycle requiring some muscle to get it off centre.

Luggage capacity has been a plus for Wings of old, and the new Wing has increased this even further to more than 150 litres (up seven litres) with the redesign of the panniers.

Gone is the six-stack CD system that used to take up a lot of room in the trunk, in favour of a revamped surround-sound audio system with iPod connectivity. There are now six speakers with 80W SRS power to crank tunes out. You can now play MP3, WMA and AAC music files by connecting an iPod, iPhone or USB stick in the trunk. Unfortunately there is no pocket or retaining strap for your iPod, but once plugged in, all features can be controlled by the switchgear on the left bar. I don’t have one of the latest iPods, but thankfully Honda has retained the old-style earphone plug in the front left glovebox so I could experience hot tunes as we rode around. I guess they don’t call it the “Luxury” for nothing. 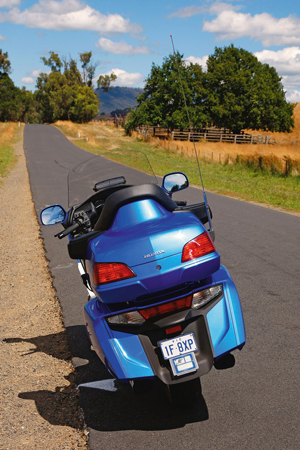 A major feature on the Wing is its built-in display unit. It has been given a brighter screen and the GPS is a “next generation” unit for more reliable reception. It has 3D maps, lane assistance, junction view and optional voice prompts. A bigger-capacity SD card mounted in the trunk allows for more routes to be stored. Another great benefit of having a removable SD card is that you can load the trips you take on your bike, take the card out and plug it into a friend’s Wing, and load that same route to their bike. Even if your friends don’t have a Wing, as long as they have a Garmin GPS that can accept an SD card, you can load it onto this as well. Now no one can get lost! Or, well, hopefully …

Comfort has been improved with a new shaped seat. It is now more of a wrap-around design for the passenger and while the shape is only slightly different for the rider, it provides more support for the back. The seat has also been given a new urethane seat cover material with a perforated design for a sporty look.

As with the previous Wing, the new one has the manually adjustable screen with 100mm of travel. To top off the comfort factor, the standard cruise control works seamlessly. For safety, the revolutionary airbag system is the same as before, just minus two “G force” sensors.

Honda’s combined braking system has been retained and works well on such a large machine. The engine is unchanged as well, being the 1832cc flat-six cylinder. It has massive amounts of torque for super-relaxed touring. I actually found myself riding around in fifth gear smoothly in 60km zones. If you have never ridden a Wing, be assured that it only needs five gears thanks to so much torque, but one great feature is the electric reverse gear. All you need to do is have the bike at a standstill in neutral, press the “RVS” button, and to move, press the starter button. The Wing only moves at a slow walking pace so it won’t get beyond your control.

During the presentation of the new Goldwing, a question was raised about the Wing’s reliability. The Honda national technical manager informed us that he has heard of no issues with the big beast and was surprised himself to find an owner with 350,000km on his Wing, with no wear internally when he pulled it down just for a look. 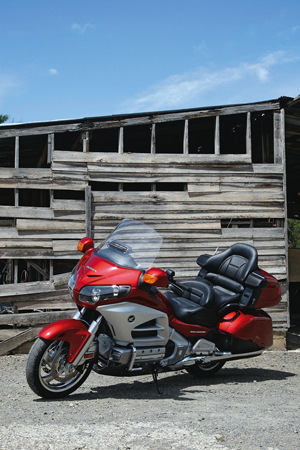 A number of accessories is available, the most notable being the fog light LED kit. Fog lights used to be standard on the Luxury version, but were not LEDs. Other items consist of a trunk spoiler, pannier and trunk carpet set, pannier and trunk bags, various chrome bits and pieces, tall windscreen, passenger armrests and many other accessories that can personalise your Wing as much as you like.

After a very relaxed ride around Victoria’s countryside, I can happily say that the 2012 Honda GL1800 Goldwing has a fresh feel and with a retail price some 8000 dollars less than the 2011 model, ($35,290 +orc), it makes more sense than ever to check one out for those big touring rides you have planned with as much luxury as you could handle. 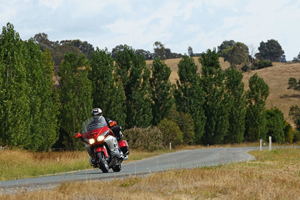