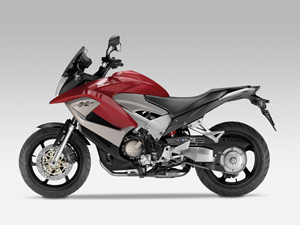 Honda’s VFR800 sports tourer has long been one of the marque’s most popular bikes, and with good reason. To leverage that fantastic V4 engine and all-round usability even more, Honda has released the VFR800X Crossrunner, billed as having the flexibility and exciting attitude of a naked performance machine with the upright riding position and rugged appearance of an adventure bike.

In truth it’s more of a road runner than a cross runner but, having attended the Australian launch and done some swift road riding, I took the Crossrunner home to see how it would perform on well-maintained dirt roads and to really find out if it has any adventure tourer in it.

The Crossrunner is based on the 2009 VFR800. The main differences you will notice, apart from the quirky styling, are the higher bars, different-shaped seat and side-exiting exhaust. Hidden under the seat is a revised rear subframe, thanks to the removal of the underseat exhausts; otherwise you basically have a VFR800.

First impressions of the new styling had me in two minds. The first one (after seeing pics on the internet) was, “Oh no, what has Honda done?” The second, after seeing it in the metal and spending some time with the bike, was, “You know what? This is a purposeful-looking bike. Great job.” So while it does have quirky looks, I suspect it will grow on you, too, quite quickly.

That’s even truer once you sling a leg over the Crossrunner. At my first “sit” on the bike, I was impressed with the way I felt comfortable straight away. The reshaped seat (a little flatter) is perfect, the bar height and width are likewise. You just need to stick your arms out at a bend that feels nice and — voilà! — there are the grips to hold onto. 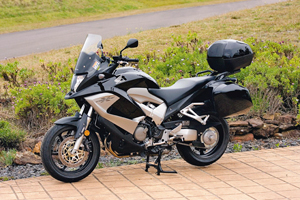 Seat-to-peg height is suited more to riders under 190cm as the pegs are set up and back, much like a sports bike (a bit weird considering the brief), but at my height of 195cm I was still quite comfy and had enough room to move around. The pillion seat has been widened and flattened out for a more comfortable experience and to make mounting and dismounting easier.

A new “floating” LCD instrument panel sits up nice and high and provides speedo, bar tacho, clock, twin trip meters, coolant temp and even ambient temp. Reading the speedometer is easy on the eyes. Seeing the bar tachometer running across the top of the panel is a little harder on the eyes, but after riding the Crossrunner for a couple of weeks I’ve learnt to live with it and find it effective.

Braking has been revised on the Crossrunner and it is now a simple combined ABS system, not dual combined like the VFR’s, but the combined part is not what you’re probably thinking. If you squeeze the front brake lever, only the front brakes will come on (as per normal); it’s only when you push down on the rear brake lever that the combined system activates — and it’s not noticeable at all.

How does it work? Apply the rear brake as normal; then, after a fraction of a second’s delay, it will activate one piston on the outside of the right front caliper. This provides an added bit of safety that’s great to have, especially since it does not change how the brakes feel. I was never a fan of combined brakes but I like the way the system has been set up on the Crossrunner.

The tried and pretty much bulletproof V4 VTEC engine is unchanged in power and torque from the VFR800, but there is a bigger flywheel to smooth out the bottom end and make it more tractable on dirt roads. It also has the knock-on effect of making the V-TEC smoother.

V-TEC, in case you haven’t been keeping up your diet of acronyms, is a system where two valves per cylinder operate until 6600rpm when the remaining two cut in, producing more power. On deceleration, the system switches back to two valves at 6100rpm. 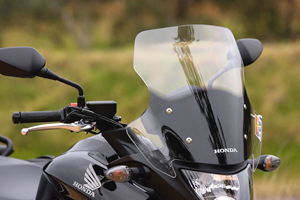 The throttle control feels really linear, as if it’s connected directly to the rear wheel, and I could pick up the throttle quite early coming out of corners.

Suspension travel has been increased over the VFR800 for light adventure conditions; there’s 61mm more on the front and 26mm on the rear. Ground clearance is also up, but only around 10mm. This has seen a small 11mm increase in seat height but there it’s no problem getting a good plant on the ground while stopped.

It would be great to fit some stickier sport touring tyres; boy, what a swift road bike this would be. The Pirelli Scorpion Trail tyres grip well but I would like just that bit more feel from the front tyre.

Fuel capacity has been reduced by half a litre from the VFR800 but you can still expect more than 300km from the now 21.5-litre capacity.
Honda has been quite cautious (but purposeful) with the range of accessories available for the Crossrunner. There are colour-matched 29-litre panniers and a 31-litre topbox. Not only are they spacious but the topbox also comes with mat and straps. The price is a bit of a hit to the pocket, though, at $2528.90. One issue with purchasing either the panniers or topbox is that you must fit the entire set of pannier and topbox mounts to run either of them.

Other accessories include inner bags for the panniers and topbox, 12v socket, centre stand, three-level heated grips (only 1mm bigger than the standard grips), tank and fuel cap protectors and wind deflectors that mount to the side of the front fairing.

To test the Crossrunner in the dirt I took the maintained road from St Albans to Bucketty (NSW). Normally, this road is fairly reasonable but on this occasion a grader was doing maintenance work. As usual, where the grader had dug up the dirt it was like riding through soft sand. To my surprise, the Crossrunner handled the conditions well. The extra suspension travel and ground clearance made things comfortable and allowed the suspension to work over corrugations, helped maintain traction and, most of all, kept the bike controllable.

Pirelli Scorpion Trail tyres are standard fitment and work well on the harder-packed sections. Through the soft, sandy-like sections, something a bit more off-roady would have helped but the wide upright bars kept the plot under control. 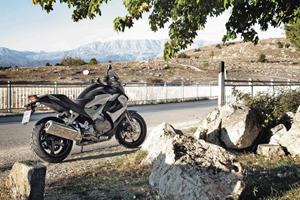 The added weight of the bigger flywheel helps with tractability; the V4 doesn’t spin up the rear wheels unless you really want it to. Comfort in the saddle is pretty good, too — the upright bars make steering through more difficult sections easy. When the occasion presents itself to stand up for extra vision, the bar position will suit just about everyone. I was quite surprised to find that if you want to take dirt roads to continue your adventure, the Crossrunner will handle them with ease.

There you have Honda’s new VFR800X Crossrunner. It will take you over many roads and it could well be the adventure machine you’d choose if the vast bulk of your riding is to be on the blacktop. At just $14,990, the price is right, the engine is right, the handling is right and ergonomics are right: it ticks all the right boxes. I would be quite likely to buy one if I had the money.
SW