There are still states where you need to learn on a 250cc bike. The outcome is a lively market for 250s, at least in the states where they are mandatory for learners.

Many of the bikes are good things, too, so it’s no surprise that some models sell quite well outside those states, too.

Kawasaki has just added a model that should sell very well indeed, just about everywhere. It’s the 2008 Ninja 250R. They tell me that hundreds of them are already pre-sold and Kawasaki is confident the bike will be the top-selling model for Kawasaki this year. At a recommended retail price of $6490 plus on-road costs, those kinds of sales would not surprise me at all. 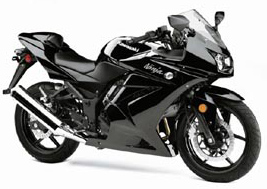 Mind you, Kawasaki might be stretching the bow a little far when they describe the bike as a “supersports” machine. It’s true that the new full fairing, based on the same design as the new Ninja ZX-10R (actual) supersport model, makes it look the goods. So does the single kicked up muffler, UNI-TRAK rear suspension and smart-looking petal disc brakes.

But underneath the new clothes (and even on top of them in a few places such as the instruments) it’s pretty clear that this is just the old Kawasaki 250 parallel twin. In Europe they get a fuel injected version, but we (like the Americans) have to make do with carburettors.

Don’t get the idea that the bike is dull, just because its mechanicals are, well, let’s say “well proven”. Both in the city and on twisty country roads, the lightweight, rider-friendly Ninja 250R with its competent running gear is a pleasure to ride. And you’ll learn a lot about gear changing, too. No problem there, by the way, both clutch and gearbox are solid and user-friendly.

There are other convenient features as well, such as a low seat, low-effort controls and a comfortable riding position.

The Ninja 250R’s successful blend of a rider-friendly engine and chassis with top-class Ninja styling goes to show that good things do come in small packages. At least there’s a bit of fun to be had for those of us who live in states where we don’t have access to LAMs (learner approved motorcycles). And that’s what really sums up the littlest Ninja: rev it hard, and it’s a lot of fun.

We’ll leave the last word to Kawasaki: “Best of all, like the Ninja ZX-10R and 6R supersport bikes, the Ninja 250R places control firmly in the hands of the rider, making it the most exciting bike in its category.”
ARR