Over 30 years ago Yamaha launched the YZF-R7, a limited-edition 750cc homologation special designed to win the Superbike World Championship with Noriyuki Haga at the handlebars.

He didn’t quite succeed and Superbikes moved to 1000cc four cylinder bikes, and the R7 is now considered one of those rare, special street-legal race bikes.

But the name has been re-born with the 2022 YZF-R7… and it’s a mid-capacity sportsbike. Apart from that, there are few similarities. And it’s replacing the R6 in Yamaha’s line-up, which already has the internet in an uproar, for how could Yamaha replace a 116hp four with a 72hp twin? 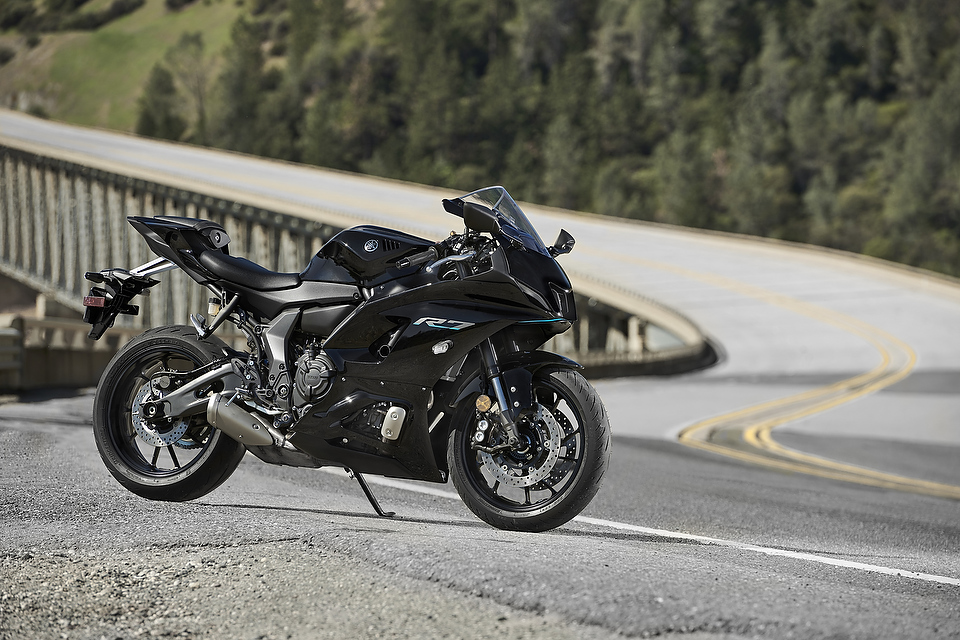 Here’s why: because Yamaha believes it will sell… and it actually fits into its current line-up much better than the R6 (which will continue as a track-only offering… which we’re guessing means you’ll have to order one, they won’t be stocked by dealers and could potentially lose their street-legal homologation, but that’s not clear yet).

Based around the MT-07 and using the same motor, Yamaha will offer both Learner Approved and High Output versions, just like the MT-07. Importantly, it’s a great step-up from the 300/400cc class bikes which are selling really well. 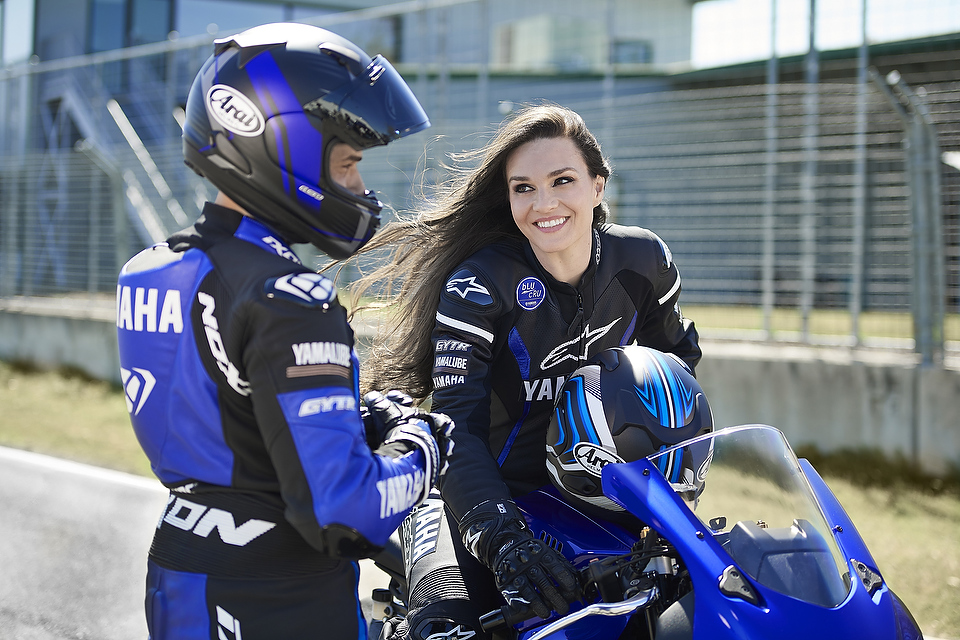 The engine appears to be unchanged from the MT-07. The LA version is 655cc and is tuned to fit under the 150kW/ton learner approval limit. The HO version is 689cc is obviously more powerful… Yamaha Australia isn’t publishing horsepower figures – the European model produces 72.4hp and Australian Road Rider can’t see any reason why ours would be different.

With its ultra-slim profile it’ll be faster than the MT-07, especially if the rider is able to get behind the screen. It will also accelerate harder, thanks to altered final gear ratios.

The chassis set-up has been ‘optimised’ for sporty riding, so expect sharper steering compared to the MT-07. 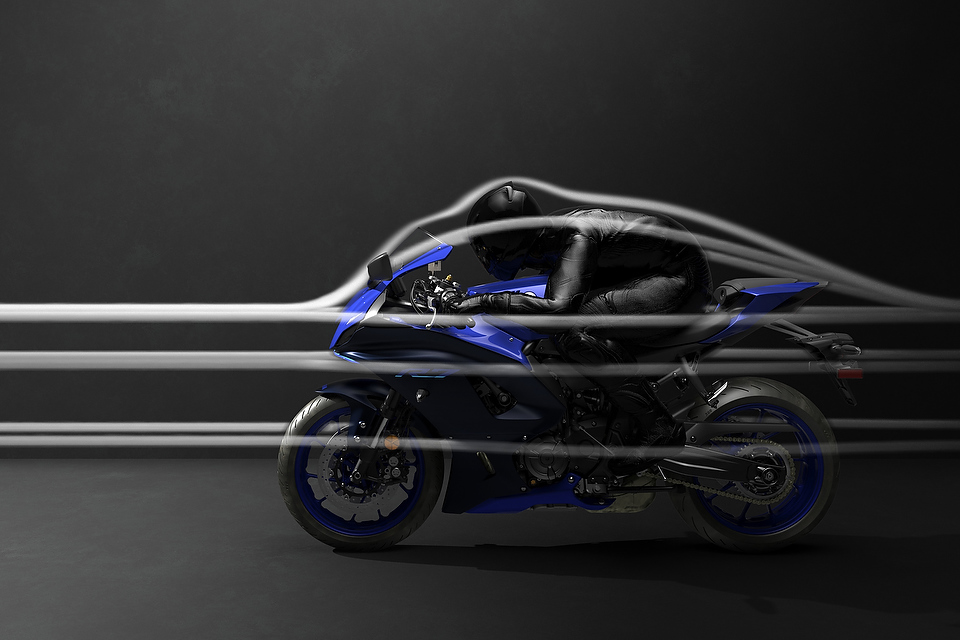 USD 41mm KYB forks are fully adjustable and a set-up for sports and track riding. The new rear shock is mounted in a linkage and features preload and rebound damping adjustability. It’s mounted horizontally to help keep the wheelbase short and mounts directly to the engine crankcase, which should reduce stresses on the chassis.

The riding position is sporty, but it’s interesting to note Yamaha went to some lengths in the press kit to emphasis the efforts it went to trying to make the bike comfortable – Yamaha describes the riding position as “comfort-focussed racing inspired”. The company understands many R7s will get taken to racetracks, but most miles will be racked up on the street. 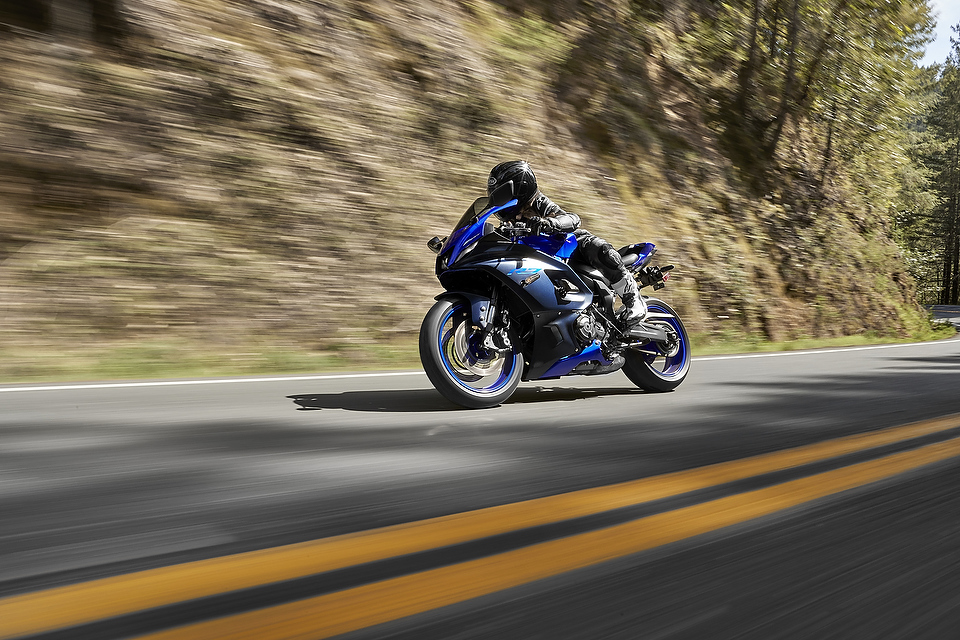 Back to the future

Here at Australian Road Rider we’ve been wondering when a manufacturer would launch an affordable sub-100hp midrange sportsbike for ages. Go back 30-odd years and the Yamaha FZR600 was considered a supersport weapon with its 91hp pushing 208kg.

At the time learners were restricted to 250cc machines and moving to a 600 was considered a smart move when you’d done your time.

Supersport bikes got lighter, faster and harder and harder for young riders to make the leap from small bore machines to something bigger.

These days LAMS bikes are up to 660cc but the leap from a restricted bike to a modern Supersport 600 like the R6 was huge in horsepower, intimidation and price.

The difference between a modern 600 Superport bike and its 1000cc big brothers is, in so many areas that matter, getting smaller and smaller: Supersport sales have been on the decline for 20 years because many riders couldn’t see the point and simply leapt to the open class machines.

The new R7 might just represent a bridge between the R3 and the R1 – I can see plenty of riders learning on the tiddler, honing their skills on an R7 and then moving on to the big-bore machine. 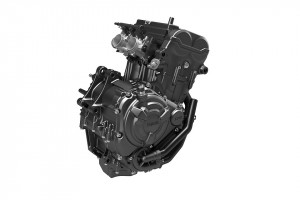 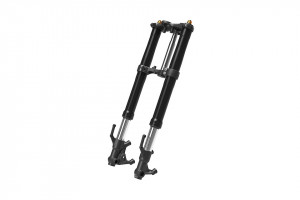 With and emphasis on offering the best bang-for-buck in the ‘hyper naked’ class, Yamaha’s 2021 is going to be both lighter and more powerful than the model it replaces. It’s also going to be technologically […]

In just its third iteration since being introduced in 1999, the new Suzuki Hayabusa has been brought up to date with new electronics, riding modes, quickshifter, combined braking, traction control, cruise control and more. The […]

Iconic Yamaha models are on display in a travelling roadshow touring Australia to mark the mighty factory’s 60th anniversary. A selection of classic road and dirt bikes are part of the celebration, as are some […]