I was a pre-teen and hooked on I.C.E. The rush of adrenaline, the smell, the feel. They were, and still are, addictive. I take a hit as often as I can.

In my humble opinion, there is only one way to really experience I.C.E. — not cooped up surrounded by metal and whizbang safety features, but out on two wheels, raw, involved and exposed. Unfortunately, it looks like the days of unfettered I.C.E. are numbered.

I.C.E. has many children. There’s the raw, balls out, suck and blow; the sedate double banger; the slower single thump; three and four burner — even six hitters…

Everyone still here on this spinning orb hasn’t lived a day without I.C.E. but its days might be numbered. I don’t know how I feel about that. Still confused?

The Internal Combustion Engine — I.C.E — has given us thrills, spills, joy, heartache and everything between. Remember the first rime you threw a leg over a saddle with a rumbling lump of metal purring or vibrating beneath you? Was it ring-a-ding, rumble or bark? The promise of unfettered power with just a twist of the wrist?

Over the years, like most of you, I’ve ridden a lot of different configurations of the mighty internal combustion engine. The blue haze of an on-song two-stroke, punching well above its capacity but oh so temperamental outside of the power band is fondly remembered (mostly). What about those upright loping single-cylinder things produced in large numbers by the British empire? They introduced generations to independent transport. Despatch riders dodging bullets powered them through mud, slush and sand that would challenge Toby Price. Big V-twins generated enough grunt to move a nation. Sidecars were hung off the side to carry the kids or tools of trade. They even held their own during the ravages of war. Out of the rubble of Europe, the little wasp (Vespa) among others got Italy mobile. All powered by the mighty I.C.E.

”Unfortunately, it looks like the days of unfettered I.C.E. are numbered.”

Two-wheeled workhorses evolved into things of beauty and speed. Brands such as Vincent, Triumph, Norton and BSA produced weapons eking every ounce they could out of their designs, while the iconic American brands persevered with their tried-and-true V-twin. Meanwhile, defeated nations Germany and Japan battled on with what designs they were allowed post-war. All had one thing in common: I.C.E.

The tough generation produced during the war years were hungry for the thrills and living in the moment. Many could be found roaring around on two wheels with internal combustion engines screaming in protest from haunts like the Ace Cafe, attempting to join the Ton Up Club. Economic prosperity helped develop the I.C.E. Exotica came to the fore from the likes of MV Augusta, riding high on the back of the great Agostini. Only those with fat wallets could buy them while the rest of us drooled. Those wily engineers from Japan were coming into their own with outrageous two-stroke race bikes with ear-splitting expansion chambers.

Baby boomers lapped it up. This was the swinging ’60s — free love, free thinkers and freedom were the catch cries of a generation. Motorcycles were synonymous with freedom. It didn’t matter if you were a poor student or a hard-nosed one percenter — a motorcycle was your ticket to freedom and maybe a bit of free love.

Then came the revolution few saw coming: Mr Honda and his huge 750cc four-cylinder behemoth for the masses. Others soon followed suit. UJMs — Universal Japanese Motorcycles — took over the world of I.C.E-powered two-wheeled transport. Now you didn’t need to be a grease monkey to fettle your bike to travel around Australia or around the world. Straddle the broad comfy seat, admire that great big I.C.E. under the tank, hit the starter and head off into the sunset. How lucky were we to live through the genesis of UJMs?

The dawn of the rising sun in the motorcycle world sounded the death knell for the stiff upper-lip Brits, who wallowed in self-pity. In reality, a lack of direction, foresight and innovation caused their self-destruction. The I.C.E. was now honed to near perfection, leaving the older designs gathering dust, unloved and unsold at the back of showrooms or tucked away forgotten in old barns. Internal combustion engines became so good in motorcycles they bordered on boring. Astute companies recognised that and green shoots of diversity started to hit showrooms. Motorcycles began to show flair in design, handling got better, and the old I.C.E. got more efficient, faster, more reliable, but remained essentially the same with a few exceptions. Remember the rotary?

Older names came back to the fold and produced modern versions of their well-recognised older models. Those of us old enough to remember had our nostalgia strings pulled into showrooms. Everything old was new again, with the venerable I.C.E. still banging away.

Right now, motorcycle sales are sky high and the choice of two-wheeled steeds has never been greater. Flash young designers vie for your dollar beside bright shiny new bikes that look like older rides. The cost of an entry-level bike is now not much more than the cost of getting a licence and buying your gear. But has the I.C.E. for motorcycles peaked?

There are dark clouds on the horizon for those of us addicted to motorcycles powered by an I.C.E. I’m not sure I’m ready for the brave new world that threatens the existence of I.C.E. Maybe that’s why my long-suffering wife is bemoaning the lack of room in the shed as I collect motorcycle orphans. I love the motorcycles that I grew up with. All of them have an I.C.E. and I’d be lost without at least one (or is that 10) in the shed. I can feel the winds of change picking up and I’m worried that the next generation, or maybe even mine, will see the end of the internal combustion engine.

Way back in 2003, while riding through Rajasthan, India, we paid a visit to the Maharaja’s car museum. Other than the cut-down Rolls Royce to carry the local cricket team, the vehicle that stood out to me was the solar-powered motorcycle they were testing to power people from village to village. It was an oddity back then. Fast forward to a few months ago when rangers in African nature reserves were being equipped with battery- and solar-powered motorcycles to do their life-threatening work tracking poachers. All indications are that the rangers find the little bikes great for their stealth. That grand old brand, Harley-Davidson, has produced an electric motorcycle. There’s even an E-bike race series following Moto GP and an E-bike race on the Isle of Man. 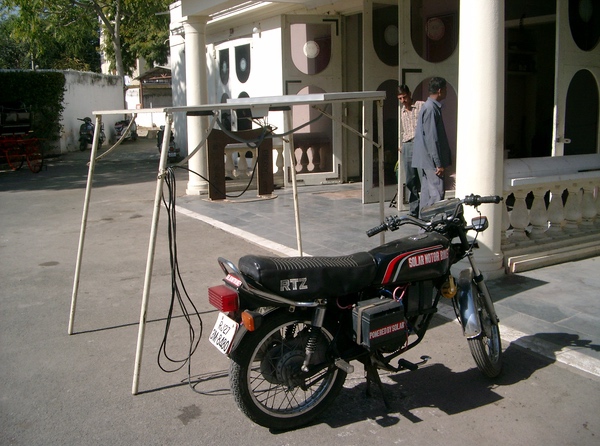 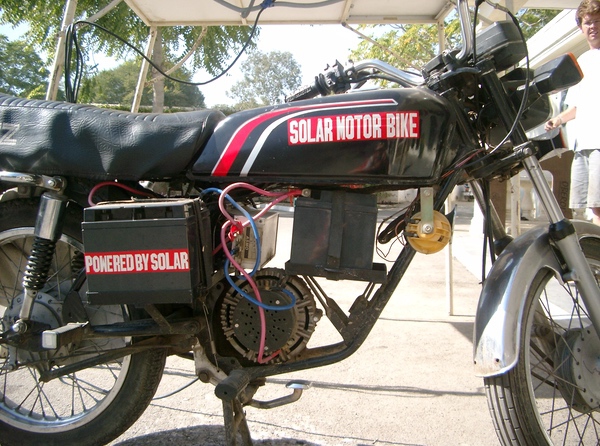 Piaggio has produced the Vespa Elettrica. New young producers such Australia’s own Savic are a long way down the track to producing an electric-powered motorcycle. There are others out there, plotting the demise of my beloved I.C.E.-powered motorcycles.

I can feel it in my old bones, the winds of change are fast approaching. I can sense the day when my old I.C.E.-powered beloved machines are vying for road space with flash young things whizzing past with a whir rather than a blast from a full-on noise megaphone.

I’m not sure I’m ready for that.