Ducati has a been announcing its new models for 2022 via internet announcements and videos rather than waiting for EICMA, the traditional big European motorcycle show this year.

Here’s the article we’ve put together for issue #164 of Australian Road Rider, with video links below each section.

Not long after this issue goes to press Ducati will release full details of the DesertX, a new off road/adventure machine designed to delight those looking for a capable, powerful open-class machine most at home fitted with knobbies.

Ducati teased the DesertX at the start of its 10-week program of bike releases via the internet, the company obviously having decided dumping everything out at once wasn’t getting the traction fortnightly releases would in these days of internet news.
So we were treated to new and updated bikes (including the Panigale V4, Multistrada V4 Pikes Peak and V2, new Scramblers, new Streetfighters) and the news Ducati would be the sole supplier for electric bikes for the FIM Enel MotoE World Cup (from 2023). 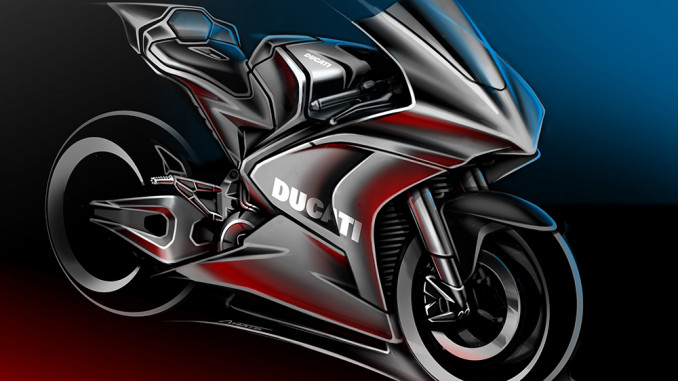 Ducati claims to have improved the Panigale in all areas for 2022: aerodynamics, ergonomics, engine, chassis and electronics.
The aims were to make the bike not only faster around a track, but also less tiring to ride, rewarding and exciting to ride for pro and amateur riders.
The now-Euro5 compliant motor produces 1.5hp more than the old bike, now 215.5hp at a screaming 14,500rpm.
It’s 123.6Nm of torque at 9,500rpm is impressive, but those of us without strong racing credentials might be more impressed that 80 per cent of the maximum torque is available at 6000rpm, so that means a very broad spread of power and fast lap times even if you aren’t brave or skilled enough to keep it close to the redline all the time.
Other changes include gearbox ratios more suited to the track for better drive off the turns and an even higher top speed. 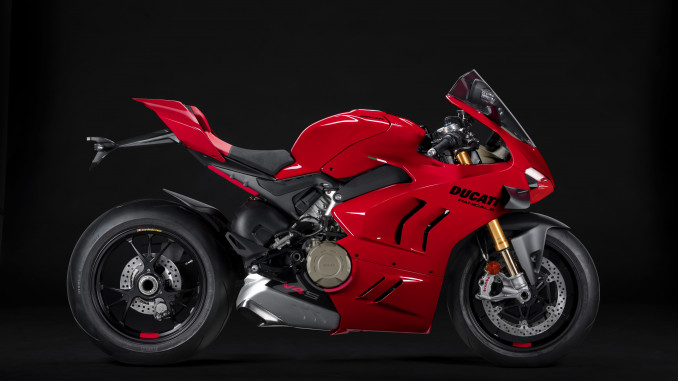 There are four power maps from Low to Full. Low is designed for street riding, limiting power to ‘just’ 150hp with a very manageable throttle response. Full is the most aggressive power map ever fitted to a Ducati, allowing the engine to “express its full potential with torque curves without electronic filters, except for first gear.”
The Panigale has Showa Big Piston Forks, a Sachs steering damper and rear shock. The S model has trick, updated Öhlins suspension and steering damper.
The electronics have also been updated.
The editor hopes to be invited a track launch of the Panigale, because his ageing body complains too much when he tries to ride sportsbikes on the street.

There’s new Streetfighter V2 and a V4 Sport Production models coming soon – the V2 in February, the V4 S in May.
Ducati describe the Streetfighter V2 as “the Panigale V2 stripped of the fairings, with high and wide handlebar, 178 kg dry weight, powered by 955 cc Superquadro delivering 153hp and controlled by a latest-generation electronic package. This is the reinterpretation of Ducati’s “Fight Formula” which, after the admired Streetfighter V4, is applied to the twin-cylinder Panigale and gives life to the streetfighter V2: the new gateway to the Borgo Panigale super-naked family.”
Sounds like a ripper to us, and priced from just $22,500. 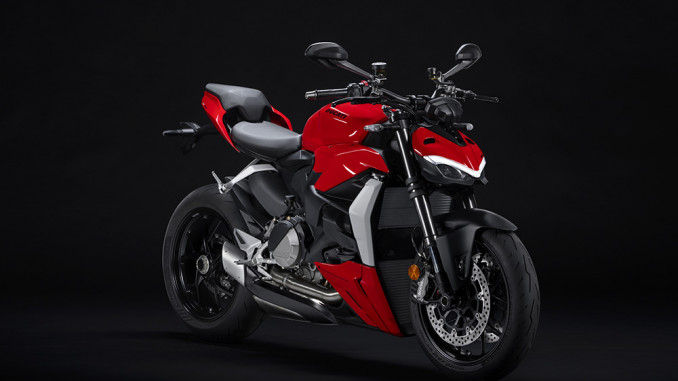 The Streetfighter V4 SP is more than double the price at $48,400… but it’s destined to being a collectors’ machine after its time as Ducati’s most brutal naked.
All Sport Production Streetfighter V4 machines will be individually numbered and “comes with a dedicated livery, premium equipment derived from the Superleggera V4, as well as with a restrained weight: 196 kg in running order (3 kg less compared to the Streetfighter V4 S).” 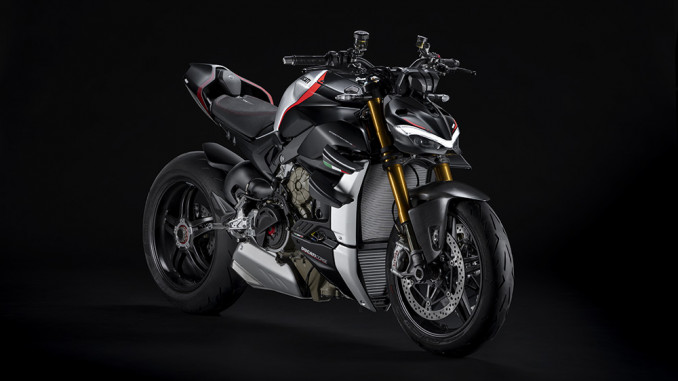 Five-spoke split carbon rims, exclusive Brembo Stylema R front calipers, Öhlins Smart EC 2.0 suspensions, 208hp, 123Nm of torque, dry clutch… the list goes on and on.
It’s an adrenalin junkie’s dream. The editor wishes he had the talent to ride one like it deserves.

The Pikes Peak Multistradas have always been rip-snorting road burners, stupidly quick on public roads because of their ability to cope with all sorts of poor road surfaces and conditions. The new V4 Pikes Peak is a 170hp machine with premium everything: electronics, suspension, 17-inch lightweight wheels, single-sided swingarm.
The editor would love to park one in his garage but for the $44,500 price tag. 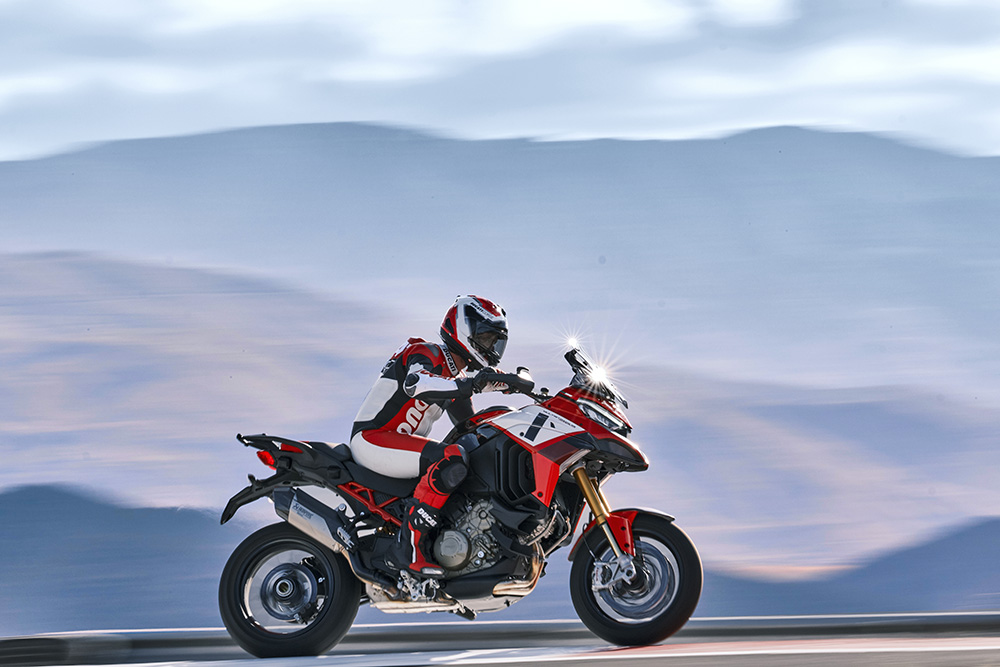 The Multistrada 950 has evolved into the Multistrada V2. The new bike is 5kg lighter and features revised ergonomics including a lower seat. A gem in the Ducati range and being promoted as an everyday bike, the V2 is also good value at $22,539 while the even better S model is $25,190. 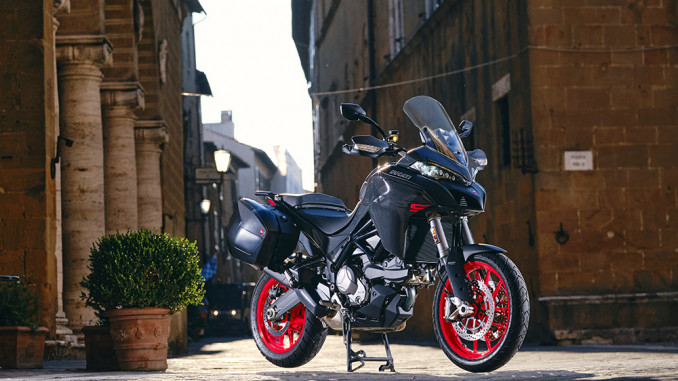 The editor has owned a Multistrada in the past and describes the old 950 as one of his favourite Ducatis ever.

“The Ducati Scrambler 1100 Tribute PRO has been created to pay homage to the history of the air-cooled twin-cylinder engine, fifty years after it was first introduced on a Ducati, which was in 1971.” 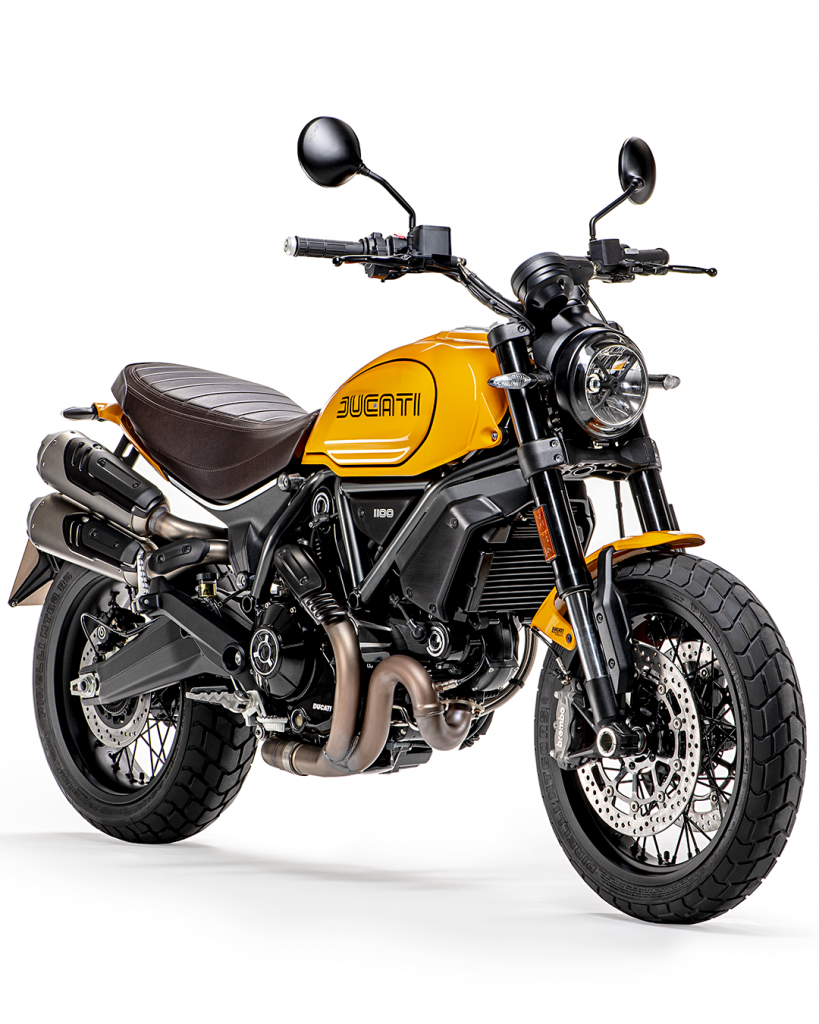 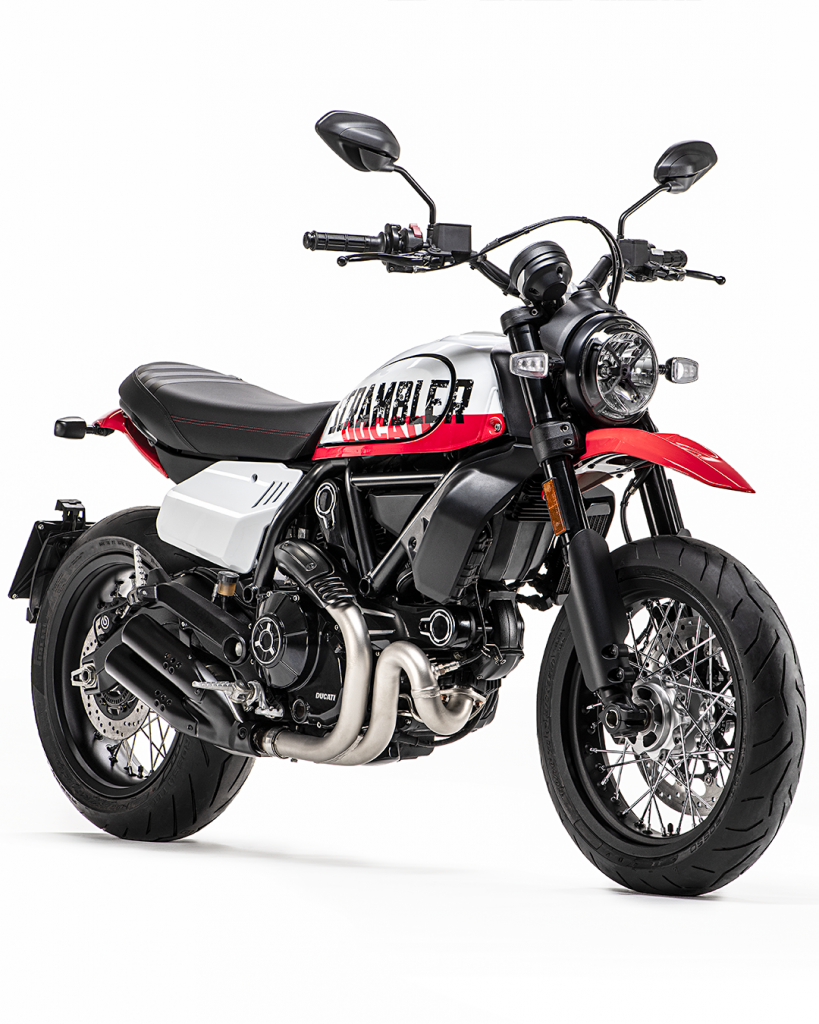 Of course Ducati goes back further than that and indeed the first Scramblers were single cylinder bikes, but Ducati was never going to go that retro.
The new 1100 features traditional colours, logo and even a brown seat… which kinda sound awful, but looks great when combined with the other styling aspects of the bike. At $21,300 it’s at the premium end of the Scrambler range.
The Urban Motard is equipped pretty-well as you’d expect, with 17-inch laced wheels, a big single disc brake, short seat and motard-style ’bars. For beating the traffic and getting around a short motard-style track it looks like heaps of fun. This 800cc Scrambler is priced at $18,900.
The editor would love a Scrambler for getting around town.

Indian is evolving its motorcycle range for 2022 with new technology, and accessories available. Bluetooth connectivity is being expanded and faster boot-up times should reduce frustration with getting systems up and running. It’s no surprise […]

Riders converge in Sydney’s inner-west for the 2017 Throttle Roll Street Party If you ever wanted to understand what the rising cafe-and-custom movement is all about, then your best bet is to immerse yourself in […]

Coming in September – in very limited numbers – is the new Ducati Hypermotard 950 RVE in street-art style “graffiti” graphics and upgrades to the standard bike’s electronics. The big change is the inclusion of an […]