At the final race of the 2012 MotoGP™ season at the Gran Premio Generali de la Comunitat Valenciana, recently crowned World Champion Jorge Lorenzo was joined by the retiring Casey Stoner, Valentino Rossi, Cal Crutchlow and Aleix Espargaró at the Thursday evening pre-race press conference.
Yamaha Factory Racing’s Lorenzo, who won the title at the last race in Australia is glad to have the pressure off his shoulders, and is looking forward to just thinking about a win: “My shoulders are lighter after winning the World Championship. Things are much easier with less pressure. I’d like to fight for the win, but there will be many competitors. Casey with the last race of his career, so for sure he’ll want to end it the best way possible, and Dani will want to make up for his bad feeling he had at Phillip Island.” And with regards to the new track surface in Valencia he said: “Without bumps it’s better to ride. You feel more comfortable and it’s more fun.”
For Repsol Honda Team’s Stoner this will be his last race before he heads to pastures new as he retires from the sport after the chequered flag on Sunday. Having made up his mind for some now, the Australian commented that his feelings have not changed: “There is to a certain degree [mixed feelings], but like I’ve said in the past this isn’t something I’ve just decided a month ago. I’ve known for a long time that this was going to be my last race. There aren’t too many emotions going on, we know what our decision means, so we’re going into this race like we are in the last races, to do our best at the moment, and see how we feel after the last race. Of course the feeling is a little bit different going into this race, not fighting for a championship, and we’re not looking to next season, so there are different feelings I suppose, to what I’m used to in the past. But in general we still feel pretty good for this race, and we won’t know until Monday how I feel.”
For Ducati Team’s Rossi this is also a milestone, as the Valencia race will be his last on a Ducati before his return to Yamaha: “Yes, it will be the last race with Ducati, and for sure we’re arriving at the end of this story between us, that unfortunately never gave good performance, or the level we expected. It will be difficult on Sunday because after you work for a long part of the year with the people, and you then have to stop and change teams. It will be very emotional. Even if the result was not fantastic, we had a good time together outside of the track, and we tried the maximum.” He also pledged to keep doing so for the last race, yet is also looking forward to his first test with Yamaha on Tuesday: “We will see and we will try to do the best for this last race with Ducati. It will be very interesting on Tuesday morning to understand which level I can have with the M1 and what the feeling is after two difficult seasons.”
Monster Yamaha Tech 3’s Crutchlow is one of the few riders along with Rossi that can still fight for championship position this weekend: “It’s nice to come to Valencia off a good result in Phillip Island. I look forward to it. It’s going to be a different kind of race for me, because me, Valentino and Álvaro [Bautista] are the only ones who are fighting for championship position any more. Fifth’s nothing to shout about particularly, but it’s better than finishing seventh, so hopefully we can have a good result on Sunday.”
Power Electronics Aspar’s Espargaró looks set to take top CRT honours this weekend, unless his teammate Randy de Puniet can overturn an 11 point deficit: “This year was great because we had a great battle with Randy. At the beginning of the year our goal was to finish top CRT, but we knew that with Randy, in his seventh year in MotoGP, and he’s a fast rider with a lot of experience – we knew that goal was not easy. In the beginning I struggled a little bit, I didn’t understand the Aprilia and Randy was much faster. But race-by-race we improved a lot and we won the last four races, so I’m really happy.”
Earlier in the day, MotoGP™ stars got up on stage at the Valencia Day of Champions to entertain the crowd and engage in the traditional auction to help raise money for the Riders for Health charity. The charity has a long standing connection with MotoGP™, and works to make sure all health workers in Africa have access to reliable transportation so they can reach the most isolated people with regular and predictable health care. 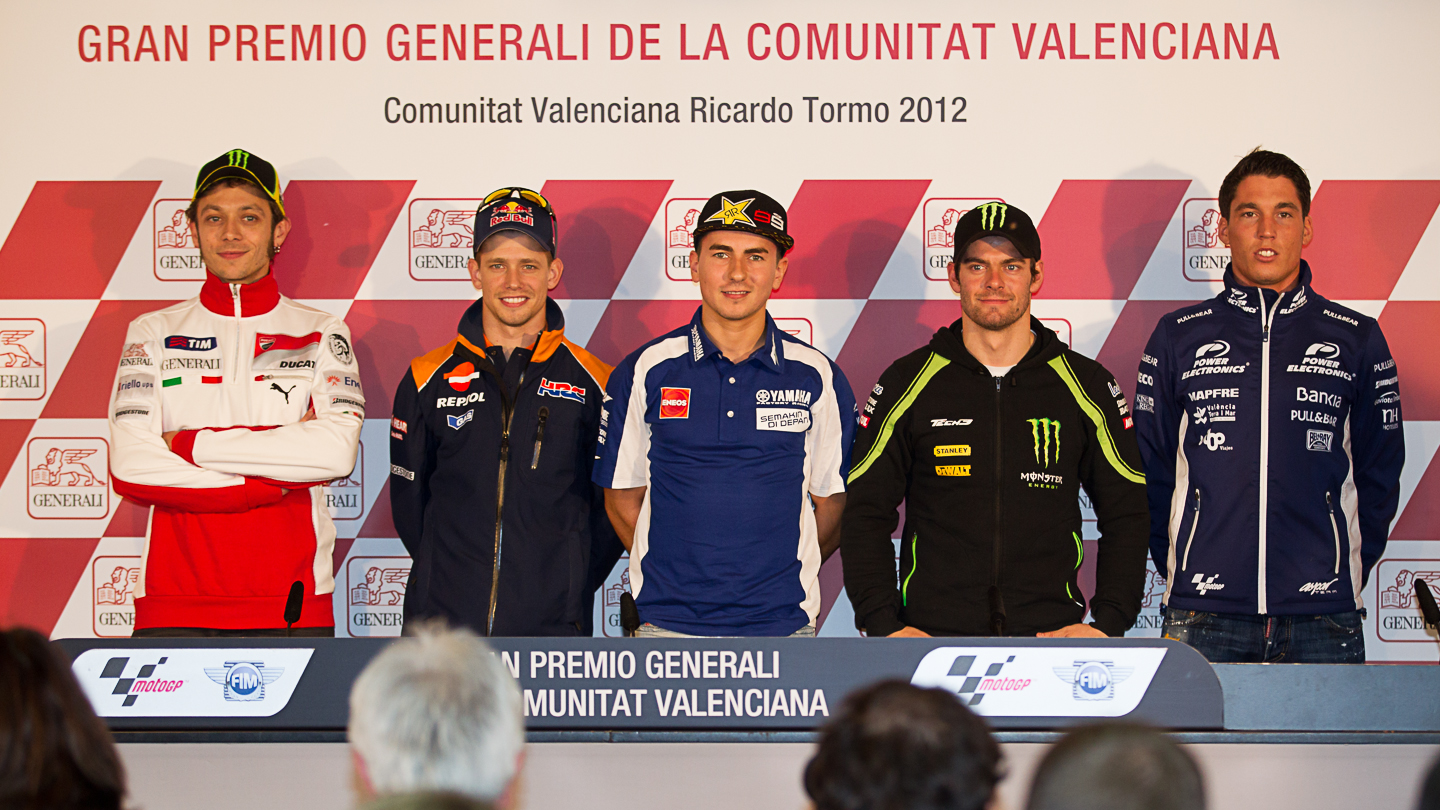