We’re good for business, we’re great customers and we want to give our custom to businesses that welcome us – hence the Road Rider Australian Motorcycle Tourism Awards.

We collate entries from across the country all year and send team members incognito to check out establishments recommended by the Road Rider Reader Community.  At the start of each year a winner is announced, and presented a write-up in the leading magazine for motorcycle travelers – Road Rider.

To nominate a venue just drop us line identifying the place and throw in a few words on why you like it as a motorcyclist.  Entries are now open via mail, email and FaceBook.

“Australian Motorcycle Tourism Awards Say Thank You to Our 2011 Winner 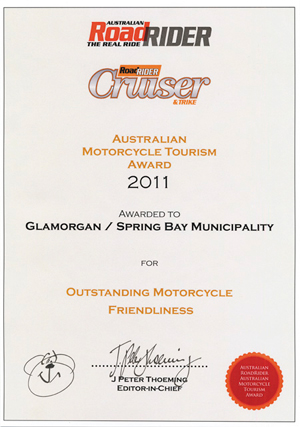 The AMC’s Shaun Lennard does the honours for us

It’s time to give something back to the many people out there who make motorcycle travel more enjoyable for us. We here at Australian Road Rider and Cruiser+Trike are doing our bit by creating the annual ARR/C+T Australian Motorcycle Tourism Award.
More details below, along with a way in which you can do your bit to get recognition for organisations or individuals who have helped you while you were out there on the road.

In this, its first year, the award goes to a place that has, in our opinion, done more for the travelling motorcyclist than anywhere else in Australia: Glamorgan Spring Bay Municipality on the east coast of Tasmania. Scooter-riding Mayor Bertrand Cadart arranged for Council to declare it Australia’s first (and, as far as I know, still only) motorcycle-friendly municipality, and its inhabitants have since gone out of their way to make visiting riders feel at home.

Bertrand Cadart, who lives in Bicheno, was presented with the inaugural Australian Road Rider and Cruiser+Trike magazine Australian Motorcycle Tourism Award at the recent opening of the Tasmanian Travel and Leisure Expo in Hobart.

I couldn’t make it due to a previous engagement in New Zealand (no, not the rugby) so the presentation was kindly made by Shaun Lennard, the chairman of the Tasmanian and Australian Motorcycle Councils.

Speaking at the presentation, Shaun said Tasmania had a long history as a destination for individual riders and clubs from throughout Australia and overseas. 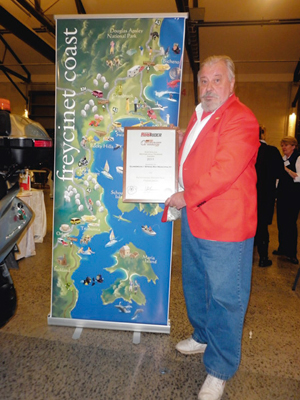 “The Australian Motorcycle Council welcomes this initiative — it’s great to share in some positive news. In a way, this is an award for all of Tasmania, because the entire state has a well-deserved reputation for welcoming motorcycle travellers, dating back to the 1970s or even earlier,” Shaun said.

“Motorcycle travel is a popular and growing recreation, which has the potential to bring money and jobs to many destinations, especially those in Tasmania. The number of Australians who own a motorcycle has increased by more than 50 per cent in the past five years, to around 700,000. The fact that Tasmania’s natural beauty and wonderful roads are being matched by the welcome of our people is a bonus that riders welcome heartily.

“The Freycinet Coast is more and more gaining a reputation as a ‘must visit’ destination for riders,” Shaun concluded.
As usual, Bertrand himself found not only honour but also humour in the ceremony.

“I would like to personally thank you and your readers for the great honour bestowed on us as the initial recipient of this award, which, without a shadow of doubt, will become a holy grail for (hopefully) most of the 530 odd Australian local councils.

“The Expo was partially sponsored by a local Hobart Radio Station called 7HO and they brought a mini portable studio from which they were broadcasting ‘live’. We were very lucky that the remittance of the ARR award was part of their live broadcast.

“However, something very funny happened that you might see fit to share with your readers. The photos will show that your framed award was relatively large and quite rigid.

“Now, the radio show was hosted by a team of two young people (one male and one female) sounding pretty cool and groovy; the young male was given the award to hold for photographic purposes. 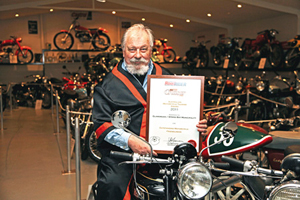 “As soon as we went live, the young female radio announcer, with great fanfare and enthusiasm, announced that her male partner was ‘red on the face with excitement because he was holding in his hand something quite large and very stiff and she could not really say on air what it was!!!!’

“At that point, I was just about to be interviewed live but I lost the plot and had to take a few steps back, totally incapable of responding seriously to this situation! Shaun Lennard had by then lost his composure as well and a crowd of around 25 people watching had also dissolved into laughter.

“The penny dropped, then and there, in the poor young lady’s brain. The poor girl’s face started to swiftly turn crimson as she realised in what jam she was on a ‘live’ program!!!!

“I have to say, she handled the situation exceptionally well. I can’t exactly remember how she did it as I was killing myself laughing, but we eventually managed to regain our seriousness and both Shaun and I could respond to her questions about what does it take to be ‘Motorcycle Friendly’ and read your statement on air.”

Well, I don’t imagine that we’ll get that sort of a launch in future years, but there will be future years — if you’re interested.

From now on, we’ll be relying on nominations from you for a shortlist of contenders. We will accept nominations until halfway through 2012 — that’s the end of June. You can suggest whomever you like; another municipality is probably the most likely recipient but we will happily accept nominations for a town, a bike shop, a pub, a motel chain or … well, in parts of Britain the local police go out of their way to help visiting motorcyclists, so it could even be a police force. 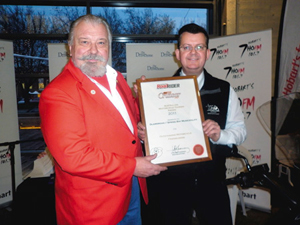 The only real proviso is that the nominee must have done something outstanding to promote motorcycle tourism or to help travelling riders — in Australia or New Zealand.

Get to it — don’t wait for the deadline: send your nomination right now to: