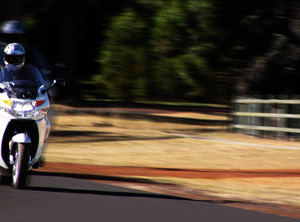 Whilst running the one national Ride to the Red Centre each year has been very successful in helping to raise awareness of depression around the counrty, Black Dog have been searching for a way of keeping the momentum sustained over a longer period. I am currently working on an exciting new National event which will be known as Black Dog Ride Month. At this stage a WA Ride is confirmed for April 29, 2012 and I’m hoping to have other States on board soon. The basic details of the event are:
•   The month of April will become Black Dog Ride Month all over Australia.
•   The basic concept is for a one day ride to take place  from a chosen country town in every State and Territory. The towns would be approximately 2 hours ride from their Capital city meaning some riders would make their way there on the Saturday and others would ride there early on the Sunday.
•   The Ride, of approximately 150-200 kms, would start with a breakfast and mental health expo, morning tea and lunch at the end town which would be about 2 hours from the City.
•   This concept is based on a very successful BDR I have run in WA for the last 2 years. This year we had 400 riders participate.
•   During the event we are hoping to set a World Record for the most “Black Dogs on Bikes” with States competing against each other for the title.