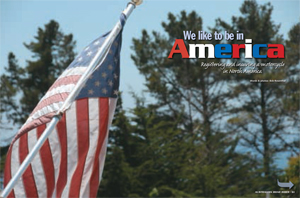 Registering and insuring a motorcycle in North America

Recently I ran into Bob Rosenthal, who was BIKE Australia’s chief road tester and all-round technical guru when I was editing it. We got talking and Bob told me he bought a bike in the USA. Immediately, a light went on over my head. For ages now, after many requests, I’ve been trying to work out how to best do that. And here was the man who’s done it — and who could tell us how you can do it! Take it away, Bob, and thank you on behalf of so many readers.
PT

In 2007 my wife and I decided to do a spot of touring in the USA and catch up with our friends living there. Dilemma one: to take my BoxerCup over, rent a bike or buy one there? Not liking the idea of long transport of my bike, and finding that rental costs can be around US$200 per day, the obvious answer is to buy one there.

So, dilemma two, which one? We have done two Edelweiss trips in Europe and both times the tour guides rode BMW R 1200 GS bikes. They both told me that this is their preferred bike out of all the bikes in the company stable. That was good enough for me. I took one for a ride here and was hooked.

Many weeks of internet searching later I finally found one in Reno-Sparks, Nevada. Price was excellent and the dealer, Sierra BMW of Sparks, seemed really helpful. I went ahead and purchased the bike by direct transfer of funds to Sierra BMW’s bank account, explaining to the dealer that we would not be in the States until some months later. He was happy to store it for us until pick up time. So, where to from this point?
Well, you can’t register a vehicle in Nevada without a local address. No problems there — we could use our friends’ address, as they live in Reno. Next hurdle. You cannot register a vehicle without a current insurance certificate. This is where the real problems began. 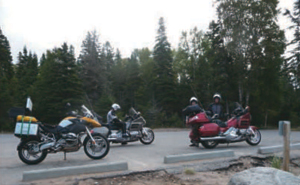 Not being a US citizen, I had no social security number. This requirement no longer applies, but at the time it meant a 50 per cent surcharge! We started looking anyway.

The company that I decided to go with was Progressive Direct Insurance, a national company and one of the biggest there. You can do almost everything on the net, so off I went. Now comes the fun. There is no such thing as “bomb insurance” in the US. No third party property, fire and theft. Just full, comprehensive insurance. Oh, they don’t care about engine numbers there either, just the VIN.

So, they want to know all the usual things like make, model, capacity, garaged address and your history. Then — and remember this is America, the land of options and opportunity — you need to select:
• Your liability cover.
• Your property damage liability.
• Uninsured motorist’s bodily injury.
• Uninsured motorist’s property damage.
• Medical expense benefits.
• Medical expense benefits other than collision.
• Collision.
• Transport expenses.

Each one of these items costs extra and the only one that isn’t compulsory is the medical expense benefits.

So, on their web site they guide you through each step but they don’t give you a clue how much insurance cover to take; they simply give you the options. I called them — thank goodness for VOiP. The guy on the other end of the phone was really good, but each time I asked him what to select and how much he replied, “We can’t advise you on that, sir. It’s not ethical.” 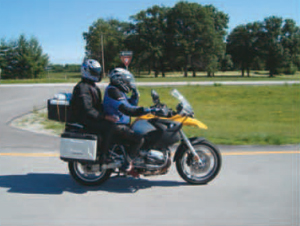 I should try to explain something here. The uninsured motorist bit is because there are 20 million illegal immigrants, mostly Mexicans, in the United States and most of them don’t have a licence or insurance. Who’s going to cover things when the worst happens? You are, if you’re smart.

One more thing: the medical cover is not compulsory but take it. Don’t rely on your travel insurance without reading the fine print. It quite often has some kind of disclaimer for riding motorcycles.

So there we were, all insured. Only registration to go. BY this time we were in the States. I was issued a temporary plate by Sierra BMW and used that to ride around to the DMV (Department of Motor Vehicles) office in Reno, expecting a lot of local government nonsense. Not so. With my insurance papers in hand, I was in and out in 20 minutes, minus $202.50. All done.

We did have a crash and a claim. Progressive lived up to their hype and made the whole thing as painless as they could — 10 out of 10.

Now, we gave the bike back to Sierra BMW at the end of our trip and they put it on consignment and sold it for us. Fantastic! I cancelled the insurance and Progressive gave me a refund for the unused time. 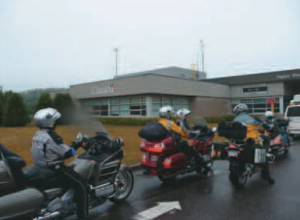 In 2009 we decided to do it all again. Went through the same internet hunt and bought another R 1200 GS, this time from BMW of Pittsburgh, Pennsylvania. Same model, almost the same cost, about $11,000 USD.

Off I went again to Progressive Insurance. This time, because of the different state I nominated, Virginia (we have friends living in Virginia), the cost dropped dramatically. The coverage was identical, but obviously Virginians don’t have such a bad claims history. Total cost this time was $349 USD. I didn’t bother to register the bike at this point as I planned to keep this one in Detroit, Michigan, with friends there. BMW of Pittsburgh put a temporary plate on the bike which lasted for 30 days.

We rode that bike all the way up to Yellowstone National Park and back to Detroit before I registered it properly. Then I got the next surprise. To insure the bike in Michigan, the collision component jumped from $145 to $279 and, because Michigan is a no-blame state, there’s an MCCA assessment recoupment loading of $104.58, which bumped me up to $592.58. As you can see, insurance costs vary dramatically in the US, depending on where you live. 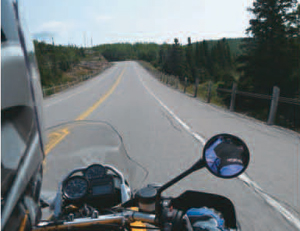 The US authorities demand you carry an insurance card, supplied in this case by Progressive, your licence and your bike’s title document at all times. The first thing a policeman will ask you for are those three documents and their sense of humour runs out very quickly if you can’t produce them.

Keep in mind, too, that you can be dealt with by State Police; State Troopers; the Sheriff; State or National Parks Rangers; and the Federal Police.

Also, in all National Parks the speed limit is 45mph. The one saving grace is that they tend to let you alone up to about eight or 10mph over the limit.

We still have our R 1200 GS in the US and try to go back every year and continue the journey.