We need to ask this question: 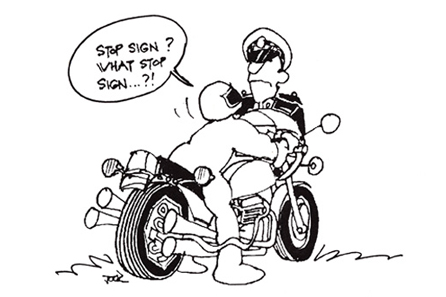 Is speeding the real problem?

Let’s get real about road safety

The ACT Attorney General, Simon Corbell, has announced that the first point-to-point speed cameras “have been given the green light”. Note the cleverly positive choice of phrase.

“Speeding in the ACT is still a serious problem, with 1826 traffic infringements and cautions issued in June and July, with a large number of these infringements ‘high speed’ traffic offences. Twenty-six people were caught driving at very high speeds, with the highest recorded speed of 171km/h in an 80km/h zone committed by a 28-year-old male.”

Hmm, just over double the speed limit. Not a good idea, of course. But there’s no indication that this bloke actually caused anything other than wild cheering by the traffic cops as they ran to their cars to begin pursuit. Nobody killed, but perhaps his soul was left behind. And if it only saves one soul …

Actually, I didn’t even know that you could “commit” speeds, but there you go — I’m not an Attorney General, am I.

Mr Corbell, on the other hand, is and when he says that “experience from other jurisdictions confirmed point-to-point systems were effective at reducing speeds and serious or fatal crashes where they were installed” as opposed to where they were not installed, then we should believe him. Or should we?

Mr Corbell, it seems to me that this would suggest training as a more rewarding response to “serious or fatal crashes” than a single-minded attack on speed. Is it possible that your thinking processes have been invaded by the NSW RTA’s invidious “Speed Kills” meme? Mr Corbell, are you thinking for yourself or are your knees jerking away there under the Attorney Generalitarian desk?

As far as I am concerned, this is the nub of the matter. I do think that the best way to reduce carnage on the roads is by getting cops out there in marked cars, not relying on less-visible mechanisms. Apart from that, though, I have nothing against point-to-point cameras in particular. What I hate is the simple-minded emphasis on speed as the all-encompassing culprit.

People, the roads could be safer if other factors, like driver incompetence and deadly road furniture (just a couple of examples), were given proper weight. But don’t worry, Canberrans. You may be speed maniacs and dangers to society, but your civil rights will remain secure!

“The system photographs only the back of vehicles and the images do not identify drivers or riders,” Mr Corbell said. “There are strong safeguards to protect personal information, and the legislation explicitly restricts access to and use of these images.”

Oh, come on, Corbell. Don’t think small! These people are dangers to society, aren’t they? You’re persecuting them because they ride or drive faster than some arbitrary figure on a sign, aren’t you? Why go all soft and politically correct now? Let’s see their picture, details of their crime and home address in the Canberra Times! That’s deterrence!

“Contrary to speculation in the media,” he went on, “these speed cameras will not be used to spy on the ACT community or to track the movements of individuals around the ACT.” Hmm. It is my understanding that Canberrans never believe anything until it is categorically denied by the government …

But enough cheap shots at the selfless members of the Australian Capital Territory’s small but (almost) perfectly formed parliament-style organisation.

Let us instead see what the Americans have to say on the subject of speeding and crashing. Here’s the review of the US Department of Transportation’s Federal Highway Administration research on traffic speed in 1998. Not all of this is immediately relevant, but I’ve left it in so I’m not accused of cherry picking, like the occasional Attorney General. The summary states:
•   That the evidence shows that the risk of having a crash is increased both for vehicles travelling slower than the average speed, and for those travelling above the average speed.
•   That the risk of being injured increases exponentially with speeds much faster than the median speed.
•   That the severity of a crash depends on the vehicle speed change at impact.
•   That there is limited evidence that suggests that lower speed limits result in lower speeds on a system wide basis.
•   That most crashes related to speed involve speed too fast for the conditions.
•   That more research is needed to determine the effectiveness of traffic calming.

Interesting? Yes. In Australia, it is a matter of faith (not necessarily of fact) that “lower speed limits result in lower speeds on a system-wide basis”, while the idea that “most crashes related to speed involve speed too fast for the conditions” doesn’t really get a run (so to speak) and, of course, traffic calming is the panacea that would be invoked to put chicanes on freeways if the authorities thought they could get away with it (and who’s to say they can’t?).

Keep in mind that accident reporting in the UK is handled by highly trained officers who do considerably more than just tick a few boxes on a form. If any figures are to be considered reliable, then these should be.

As an indication of the reliability of local figures, a source not unclose to certain elements of the New South Welsh police tells us that “the Crash Investigation Units around the place have some very well-trained people in whom you can have complete faith. However, their charter is serious crashes where Grievous Bodily Harm and serious negligence are ingredients.

“Most crashes are investigated by junior police who really have not had formal training in crash investigation. They mostly learn ‘on the job’ … Unless you get someone from the Highway Patrol to turn up and look at your crash (and that is a rare event), you will at best get an enthusiastic amateur …
“Look at the classic ‘lost control while negotiating a bend’. What about the pothole on the approach line; what about the oncoming driver who crossed the centre line and caused the crashed driver/rider to take evasive action and come to grief; what about the complete talent failure by the driver/rider? What about the position of the sun … and on it goes. Most of these options are not canvassed as the training (or lack thereof) does not cover the variables.”

What does this suggest? Well, it very clearly says, at least to me, that the RTA figures are deeply suspect and that at the very least, the idiotic message “Safe Speeding? There’s No Such Thing” should be replaced by something like “Drive/Ride to the Conditions” (or “to your abilities”).
But we can’t have that, can we? That puts the onus on the driver or rider! And he/she (you and I) can’t be trusted to think and make decisions for ourselves! The bureaucrats (“we’re from the government and we’re here to help you”) know better.

People*, please. Wake up. What does it take to make you say, like Peter Finch in the film Network: “I’m as mad as hell and I’m not going to take this anymore!”?

*Crazy people, please do not write to me to tell me that “if you’re not doing anything wrong you have nothing to fear”. This is a meaningless statement, as the figures above demonstrate. You are more than twice as likely to crash because you are not riding to the conditions (possibly “not doing anything wrong”) than you are if you’re just speeding (and breaking the law).
So crazy people, please, move to Sweden instead, where the demented Option Zero with its focus on stopping all crashes was spawned, and take up the heavy drinking that’s the national sport.

Eudaimoniacs
You want to be happy, don’t you? Philosophers have been known to define happiness as living a “good” life, or “flourishing”, rather than simply as an emotion. Happiness in this older sense is still used to translate the Greek eudaimonia.

A student of happiness, the psychologist Martin Seligman (nominative determinism at work: in German “selig” means “blessed” or “happy”) has described five crucial elements for wellbeing. Interestingly, they apply no matter whether you are chasing the emotion or the eudaimonia. His PERMA mnemonic (my, we are Greek today) is rather good, akshuly (sic).

Let’s all see how we go with it, as motorcyclists.

P — Positive emotion: experiencing joy and pleasure. Presumably, like me, you enjoy riding your bike (without spending more time looking at the speedo than the road and surroundings, worrying about hidden cameras and feeling demonised by drivers).
E — Engagement: being consciously involved in activities. Are you — are we — engaged enough in the fight for our recreation? Have we taken a stand? Have we made our feelings clear to someone in power?
R — Relationships: having enjoyable interactions. Do we engage in a positive way with our fellow riders and the rest of the world? Do we commit small acts of anonymous kindness for drivers as well, like letting them into traffic streams? Or do we sneer at fellow riders if they ride the “wrong” brand of motorcycle?
M — Meaning: a purposeful narrative about our lives. Are we talking to ourselves and others about the pleasures of riding, or are we constantly complaining?
A — Accomplishment: achieving goals and following core values. One of our readers, Peter Hawker, recently got Sydney City to fix some slippery road crossings. What have you and I done along those lines, or by way of maintaining our freedom to ride?
Interesting? Yes. Could we be happier if we kept PERMA in mind? You bet we could.