From coal to Adelaide 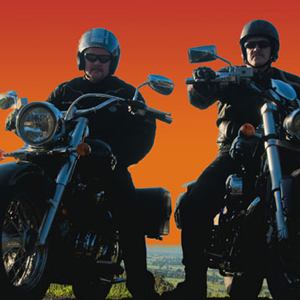 Alcohol — the root of all evil! Well not always, as I imagine many a motorcycle road trip has been discussed, planned and argued about over a few glasses of either grape or grain. But not many trips would encounter chicken hearts…

The much-anticipated Steven Walter Foundation Snowy Ride that mate Mike Pullar and I planned had to be postponed due to work commitments. Over a few light ales, we decided that a trip to Adelaide was a good substitute.

From our homes in the Latrobe Valley we would run down the freeway to the Great Ocean Road, onwards to South Australia and return inland through the Wimmera and Ballarat. Five days. Job done!

So on a sunny Thursday morning, two Suzuki Boulevards, with two excited riders, set off on our first major motorbike adventure together. The trip through the city to Geelong was fairly uneventful apart from having our faces sand-blasted by the debris spraying from a construction truck, and then dodging a slightly larger variety of debris as a truck’s tyre exploded in front of us. After a quick human refuel in the services outside of Geelong, we pressed on along the new bypass and reached Lorne, via a stop at Torquay for Mike to buy a special space t-shirt. Lunch in Lorne was at the Indian Café, a coffee shop themed with old Indian and Harley bike parts and memorabilia. A great location but seasonal staff and a very limited lunch menu led to a short stay. 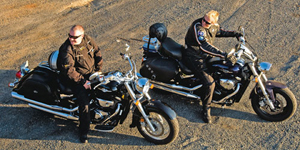 Pressing onwards through Apollo Bay, we hit the sweeping bends and sometime steep descents of the Otway National Park. Although we enjoyed the seaside scenic beauty, it was good to get away from the coastal road and concentrate on enjoying the riding without being stuck behind caravans and campervans!

Stopping in a café in Lavers Hill for more overpriced refreshment, we noticed the stupid names of some of the local shops (Pombo Mart Antiques?). After the obligatory stop at the Twelve Apostles and fallen down London Bridge, we reached Warrnambool by early evening, unfortunately not in time to enjoy the excitement of Cheese World. A quick ride around the town centre in search of available accommodation (though not in biblical Mary and Joseph desperation!) and we found beds at the Warrnambool International. Impressed?

A quick shower (after a visit to the local Coles, yep, I forgot my toiletry bag), and a couple of welcome stubbies and we were ready to hit the town. Unfortunately, nobody told us that Warrnambool town centre is closed on a Thursday night in the middle of January. Trawling the streets looking for as much fun as two weary, married, 30-somethings were allowed to have, we were sadly disappointed and ended up listening to a jazz combo while watching the sport on the big screen over their shoulders like everyone else. 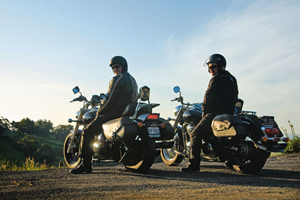 A local told us to head for Cape Bridgewater for a “great scenic beach” which wasn’t too far off our route. It would probably be a very nice place but became windswept as the weather changed and the dark clouds rolled in. We headed back the same way we had come and turned off onto the more interesting-looking road that skirted the southern side of the Lower Glenelg National Park. We were rewarded with some lovely sweeping bends and little or no traffic, until the weather took a turn for the worse as we headed for Mount Gambier.

Arriving in Mount Gambier slightly damp, we chose to make a touristy stop at the startling Blue Lake, which is not signposted, and we got lost finding this natural phenomenon.

A chocolate bar, an energy drink and a couple of snaps on the mobile phone and we were off again. The detour to Cape Bridgewater had put us a bit behind our very loose schedule, but we had decided again to take the scenic route so turned off the main road at Millicent and headed along the coastal road to Robe. At this point we were pelted by some of the biggest (and hardest) bugs that inhabit this island continent.

With the wind whipping across the Great Australian Bight and an unexciting road, we could (and maybe should) have stayed on the highway, but it’s all part of the adventure (apparently!). 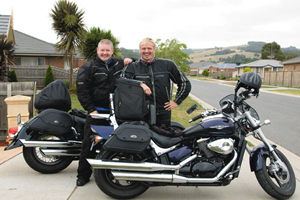 The Robe Bakery provided pastry-wrapped sustenance before we embarked on what was to prove the most challenging part of the trip.
For 10 hours we endured swamps and salt pans, strong cool winds, greying skies and fading light, all creating a less-than-exhilarating ride into Adelaide. We took a short leg stretch stop at Policeman’s Point, where our motel biscuit cache from the previous night’s accommodation was a welcome pick-me-up. Another unexpected highlight was the Big Lobster at Kingston SE.

Towns came and went as we ploughed on to Adelaide and the thought of a cool beer with our South Australian hosts Simon and Monica kept us going through the driving crosswinds — which the South Australian roads authority was keen to warn us about with numerous signs and the odd windsock.

Thoughts such as “we must be nearly there” and “how much further?” rattled around in my helmet for the last leg of the journey, until we descended into Adelaide. The cold beer at our rendezvous with Simon and Monica, The Arkaba, was delicious and went down in a couple of gulps, along with a very nice pizza.

After waking up the next morning at Simon and Monica’s home, we learned that buying chicken hearts was to be the first job of the day. So down to the local friendly butcher we went for some avian pulmonary organs. What the?

Then we drove out to see how German people live in real life. Well, not quite, but a trip to Hahndorf for a stein and a sausage was followed by more alcohol at a couple of local wineries before heading back.

Well, the chicken hearts went down and stayed down and were actually quite palatable, tasting strangely of, erm, chicken. This authentic spicy South American chilli-type dish was cooked by Monica, and was washed down with the day’s vineyard purchases.

The next morning, with a slightly heavy head but fortunately no second sighting of the chicken hearts, we said our goodbyes to Adelaide and set off for the quicker but probably more tedious trip back to Gippsland via the Western Highway.

A human and mechanical fuel and lubrication stop at Tailem Bend was the first break on what was a super day for riding. A small pit stop on the side of the highway to fix a bit of loose plastic near the ignition switch was the first and only very minor mechanical hiccup on the trip.

The boredom of the Western Highway was broken up by a stop at Kaniva, a small town just across the South Australia-Victoria border. Mike’s excitement grew with every kilometre we travelled nearer to the unassuming place because he had spent a few years growing up there and wanted to see his old house and school. The house was still there but the school had been demolished. Must be a sign of getting old when somewhere you spent time growing up is fit only for demolition; maybe it’s a metaphor for life. Well, enough philosophising and back onto the trip. The servo assistant nearly fell over when Mike bought a Kaniva fridge magnet — probably the only one sold in years!

The next leg of the journey was fairly short but probably the most uninspiring, with mile upon mile of boring highway passing under our tyres as we headed for Horsham to find a bed and some beer.

We decided to become real travellers in Horsham and looked for some very cheap and hopefully cheerful accommodation. The White Hart Hotel fitted the bill. For $30 each we got our own single room with a bed, sink, cold-and-colder running water and about three coat hangers in a wooden wardrobe. I think we may have had an upgrade because we were right next door to the communal shower room. While the room lacked panache, the proprietors did look after our bikes, which were locked in the bottle shop storeroom and ready for us to ride away on the next day at 7:30am. Colonel Sanders did his best to feed us and once again we hit the town, determined to drown Mike’s demolished-school sorrows. The Exchange Hotel looked a little livelier than the other places in town; having said that, there were only about six people in there.

After a few pots we were challenged to a friendly game of pool by a couple of young guys. During the pool games we had an unofficial contest to see who could put the cheesiest ‘80s pop on the video jukebox. As the sounds of Kajagoogoo, Bon Jovi and Ray Parker JR (“Who ya gonna call?”) faded into the darkness, we realised we had had an unexpected “good night out” and the White Hart looked much better after a few drinks!

As the sun came up over the horizon, the roller-shutter door shot upwards and the two saddle-hardened riders roared out of the warehouse in a cloud of exhaust fumes while an invigorating orchestral piece played in the background. The masters of their metallic steeds glanced at each other and with an acknowledging nod donned their sunglasses and opened the throttle to a new day of adventure.

Well that’s how the next day started in my head anyway! In reality we had decided in the planning of the trip to take a detour off the highway and follow one of the recommended rides through the Grampians, to Halls Gap. I was pretty impressed with my first glimpse of the Grampians as they loomed out of the flat land of central Victoria. The twists and turns of C222 made a timely change to the monotony of highway riding.

Halls Gap was a great way to finish because the rest of the way was highway and thinking about getting home. My first big road trip and around 2000km completed brought it home to me that motorcycling is a contradiction. It is peaceful but noisy; a lonely pastime that is great to share with others; the endless kilometres are relaxing but tiring; at times it’s exhilarating, sometimes it’s tedious, but above all it is fun. I think I’ve caught the bug!

Motorcycling is a contradiction. It is peaceful but noisy; a lonely pastime that is great to share with others; the endless kilometres are relaxing but tiring; at times it’s exhilarating, sometimes it’s tedious, but above all it is fun.