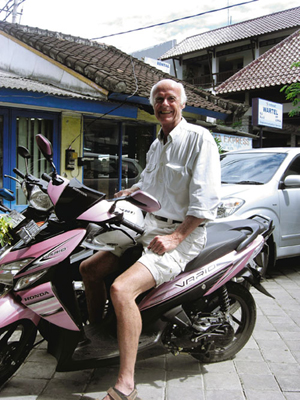 Many of us dream of riding the many islands of Indonesia. Steve Campbell did it

One minute I was up then, in the blink of an eye, I was down. I felt the shattered surface of the road bite into my right knee and I heard the scraping of my Honda Vario as it slid before me in a shower of stones and dust. There wasn’t even the ghost of a chance to get a foot down. Before setting out on this four-week odyssey east of Bali I’d made a vow: “I will not drop this bike.” But, not yet a fortnight into the trip, the claret was oozing from my knee. So much for good intentions! My mind kicked into overdrive. “The bike. The bike!” Images of splintered pink plastic, broken glass and bent forks danced before my eyes.

The Honda was lying on its side, barely a metre away, engine running. I up-righted the bike and silenced the engine in one swift movement. A quick inspection told me my luck was in. No cracked fairing, no broken lights, switches or handles. Merely a few scratches on the right-side mirror, right side of fairing and some scuff marks on the exhaust. I’d only been doing 25km/h when I came off so the likelihood of major damage was low. But even so, it could have been a lot worse.

Now for my wounds. I splashed water on my grazed knee and used a handkerchief to clean myself up. I’d lost a bit of blood and skin and had a sprained left wrist, but other than that I was fine. Just as well, as I was a long way from any serious medical help if I’d needed it. The provincial capital, Dompu, which I’d left that morning, was six hours away, 100km back down the disintegrated ribbon of macadam I’d just travelled.

As roads go it was one to remember. Witness to many monsoons, it was riddled with decay. Islands of surviving asphalt lay marooned in a dusty grey sea of sand, grit and broken foundation. Negotiating this minefield was a perilous affair requiring total concentration, deft manoeuvring and judicious use of the brakes. Fortunately the road passed through savannah country so the absence of overhanging trees meant there were no shadows within which the countless, cavernous potholes could secrete themselves.

I took stock of my situation. I knew why I’d come off. Impatience had got the better of me. Six hours of crawling that tortured track had taken its toll on my patience and my posterior. I just wanted to get to the end of the ride, get off the bike and rest, so in my eagerness I’d been travelling too fast. I remember heading right, to a higher section of the battered bitumen, to avoid a pothole. I aimed to hit the shoulder at an acute angle to lessen the impact on the suspension. But part of the shoulder must have broken away and the rest is history.

I still had maybe two hours to go to reach the village of Pancasila at the base of my goal: Mt Tambora. Its massive presence dominates the peninsula that juts north-west from the coast, about halfway along Sumbawa’s sinuous spine. I’d been keeping an eye out for the mountain all day but it lay hidden beneath a thick quilt of leaden rain cloud. To the west the land undulated away until it kissed the edge of an azure sky.

Occasionally the road crept closer to the sea and I caught glimpses of calm waters lapping distant shores — the sort beachcombers long to roam.
Mt Tambora literally blew its top in 1815 — an event estimated to have been 10 times more powerful than the Krakatoa explosion of 1883. Its height decreased from 4200m to 2800m as 36 cubic kilometres of earth and rock were catapulted into the upper atmosphere. Some 91,000 people died and the western half of Sumbawa was de-populated. The resultant dust cloud girdled the globe. In Europe, 1816 became known as the “year without summer”. In London the Thames froze over and in some parts of Europe famine stalked the land. It was my intention to climb this peak and stare down into the abyss created by the greatest explosion in modern history. 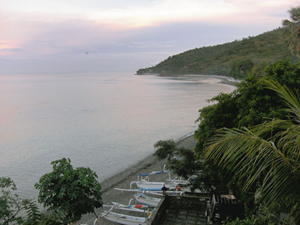 I practically had the road to myself after passing the tee-intersection that connects the Dompu-Pancasila road to that which heads west to Sumbawa Besar, the main town in western Sumbawa. I saw the occasional rider heading the other way and once in a while I’d be passed by a local speed demon — either more used to the treacherous conditions or, perhaps, more foolhardy than I. There were no cars. Now and then a pickup would appear in the distance. Depending on conditions, it would either be weaving and bouncing from side-to-side or catapulting down the road at the rate of knots, raising a great plume of grey dust in its wake.

Around midday, while I was still taking a breather after the spill, the Dompu-Pancasila bus came into view. Like a great top-heavy galleon it lumbered and lurched its way along, a dozen intrepid souls clinging steadfastly to the roof-rack cargo. I stepped off the road as the bus swept past, its dust cloud billowing from its churning wheels only to hang in the still, tropic air like a jet plane’s vapour trail.

As the bus and its passengers disappeared into the distance, the sound of its engine the faintest hum beyond the curve of the road, I found myself alone again — just me, the bike and the road ahead. I’d been travelling less than two weeks but a lot had happened since I’d begun the trip, at 7am on a Monday morning, by nosing out into the traffic on Jalan Padma in Legian, Bali, and heading east to catch the ferry to Lombok — a little wary but, nevertheless, eager to immerse myself in whatever might come my way in the weeks ahead. 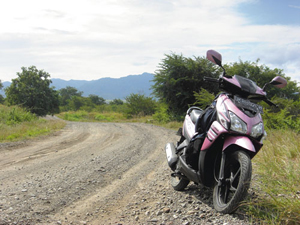 We’ll have more of Steve’s adventures in following issues of ARR. Stay tuned!

Who is Steve Campbell?
“I enjoy getting off the beaten track and don’t mind a challenge,” writes Steve, who lives in Victoria these days. “When I was a bit younger, in 1973, I rode a Honda CB450 from Singapore up to Thailand, then back down to Penang for the ferry to Madras, eventually ending up in London nine months later. But that’s another story!” 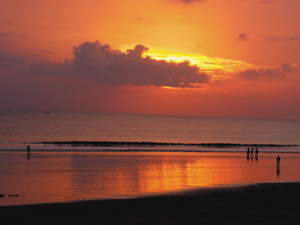