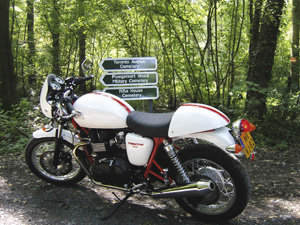 Belgium is great country. It’s about half the size of Tassie and is the land of beer (800 brews at last count), chocolate, Tintin, pampered pooches and political parties that literally speak different languages.
It’s also holy ground for Australians.
In 1914, after the Germans stormed uninvited across the border, Australians were outraged at the treatment of the neutral Belgians and went to war. From 1915 until the war’s end, 12,500 Australians lost their lives in Flanders. It’s a sacred site for us. It is also a beautiful part of the country with some great rides for those wanting to show their respect to the fallen.
So, how best to visit Flanders? The British suffered huge losses in Flanders Fields as well, so what better way to see the region than aboard a Triumph Thruxton?

My steed
The Thruxton model was named after the British racing circuit where Triumph ruled the roost way back then. It’s had a few upgrades since I last rode one. Although it looks particularly gorgeous in black, mine had a white tank and mini cowling, pin-striping through to the tail and a red frame. It still has the near-naked rear, the upswept pipes and the classic look of the 60s.
Triumph designed mock carbies that conceal electronic fuel injection. The classic stylised high-mounted speedo and tacho also have discreetly placed fuel warning light, indicators, high-beam and oil-pressure lights plus a welcome electronic trip meter and clock.
But the biggest thrill was the sound on start-up. The megaphone style pipes deliver a throaty gurgle that promises a great ride ahead.
And the bike does not disappoint.

Beware the Belgians
Belgium is famous for many things but cautious, careful drivers sensitive to the needs of other road users are not among them. As late as the 60s, no test was required to get a driver’s licence. If you bought a car, you needed a driver’s licence and so you just got one!
The general rule is avoid trams (funny that), give way to pedestrians, give way to the right and, when in doubt, accelerate! You also need sunscreen and wet-weather gear as Belgium can have all four seasons in one day.
Riders preferring to return to tell the story need to have their wits about them getting out of Brussels. If you have a choice, Sunday is the best day to do it because Belgians sleep in. The roads are deserted early in the day and the thousands of semis hauling freight across Europe are off the road. But the driving is not all horrific. Once you weave your way through the Brussels streets and onto the freeway to Flanders, it is truly relaxing.
While I didn’t want to admit it to the Bear, last time I rode a Thruxton, in 2007, my wrists began complaining after an hour on the road. To my relief, on this model low-rise bars replaced the clip-ons. While still crouching forward a little, there was no strain on my ageing wrists. The bike is manoeuvrable and reasonably light and a dream in traffic. The classic-style rear-vision mirrors fixed to the end of the handlebars give an excellent unobstructed view, both around town and out on the open road.
Once on the freeway, the Thruxton is perfectly comfortable sitting on the 120km/h Belgian speed limit. It has the same powerplant as the Bonnie but has “hot” camshaft profiles and effortlessly responds to requests for more speed.

The Killing Fields
There are three places that I love and visit regularly. The first is Polygon Wood. There are two cemeteries here: a “battlefield cemetery” in which soldiers were buried where they fell and a much larger consolidation cemetery established at war’s end. Bodies were brought in from the surrounding battlefields to this site. There are 2400 men buried here but only 400 have a named grave. It is the site of the memorial to the Fifth Division which sits above the Buttes.
It was a killing field then, but today it is a beautiful, peaceful place in the middle of a lightly wooded forest. Dawn service here on Anzac Day is a special event.
From here, it’s just a couple of kilometres to the Zonnebeke Chateau Park where I parked the bike on the grass, had a light lunch and visited the museum. Here the horrors of the Ypres Salient campaign are all too obvious and you get some understanding of what our diggers endured. 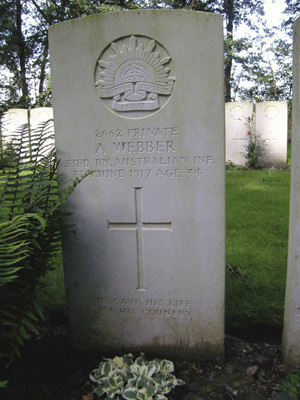 Passchendaele and Ypres
It’s then another short ride to Tyne Cot, Passchendaele. This is the largest Commonwealth War Graves Cemetery. Of the 12,000 buried here, there are 1368 Australians including two VC winners, 29-year-old Sergeant L. McGee and Captain Clarence Jeffries, who received the highest medal for valour posthumously.
The remaining German pillboxes allow you to understand why the bloody, senseless sacrifice was so great. The rear wall of the cemetery has 35,000 names on it. They’re the names of the British Forces — thousands of Kiwis too, who died in 1918 but whose bodies were not found.
From here, it’s a scenic and reflective ride to Ypres. This town was completely destroyed in WWI and Churchill wanted it left in ruins after the war, but thankfully he didn’t get his way on this one.
As you ride into Ypres, a towering structure emerges from the distance and envelops the road. This is the Menen Gate. Our men marched down the Menen Road through the old Menen Gate to the Front. Marking the entry into the old medieval city, in those days the gate was flanked by two magnificent statues of lions either side of the road. The grateful Belgians gave the lions to Australia after the war and today they welcome you into the Australian War Memorial in Canberra.
There are 55,000 names etched into the walls of the Menen Gate including 6167 Aussies whose bodies were never found. It’s moving stuff just wandering around the wall but, at 8 o’clock every night, the Last Post Association conducts a service to commemorate those whose names are on the wall. Yes, every night a contingent comes out and plays the Last Post, wreaths are laid and usually there are plenty of Australians present. The Belgians and French take scrupulous, respectful care of the battlefield cemeteries. Even today, the people are grateful.
The other imposing structure in Ypres is the Cloth Hall. It took 60 years to rebuild, but it’s a wonderful tribute to the resilience of these extraordinary people. Visit the Flanders Museum inside. There’s also a little museum and cemetery just along the old medieval wall. This Ramparts museum requires you to walk through the pub to have a look — typical Belgian ingenuity!
Heading out of Ypres, a further 30 minutes into the French-speaking region near Messines, are three cemeteries well worth a visit: Prowse Point, the Mud Cemetery and the Toronto Lane Cemetery, which is very special. It’s the only Belgian war cemetery dedicated just to Australian war dead. The 60 diggers buried here were killed over a three-day period in June 1917. Again, the site is in the middle of a beautiful forest. The winding, undulating roads through this region are a welcome contrast to the historic carnage.
Weaving back from Flanders towards Brussels there was plenty to think about. Good point, that. The bike makes you feel relaxed and able to concentrate on the road, the day behind and the Belgian beers ahead. The Thruxton is a stress-free ride, a real head turner, beautiful in its simplicity, and evokes memories of a simpler time in motorcycling.
BN

Polygon Wood was a killing field then, but today it is a beautiful, peaceful place in the middle of a lightly wooded forest.

Dawn service here on ANZAC Day is a special event.

The Ramparts museum requires you to walk through the pub to have a look — typical Belgian ingenuity! 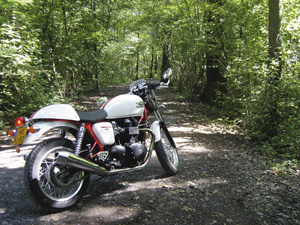 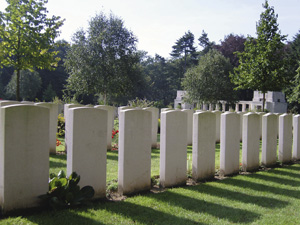