The generosity of the motorcycling community never ceases to amaze me. That was my first thought when a phone call with a familiar voice ended with, “I’m not using my house on Kangaroo Island — you’re welcome to it for a week or two.” Ms J and I had a one-week window and jumped at the chance.

When our host suggested that our trip from Penneshaw to his place would take 80 minutes, my logic circuits had conniptions. Islands are a crescent of white sand and a couple of palm trees! KI (as the locals call it) is nearly 4500kmsq in area, with 1600km of roads. It’s Australia’s third largest island — it’s big! 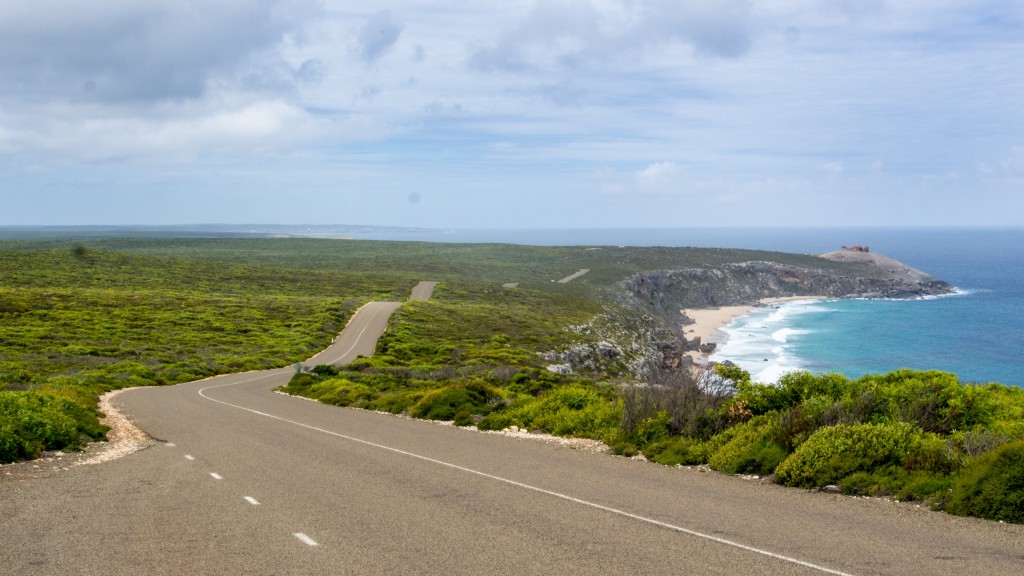 The best plan, it seemed, was to book a midday ferry on a Saturday, load the Guzzi in the van after work on Friday and drive into the night as far past the SA border as we could. After dealing with the dramas of missing the booked crossing, we finally drove off the ferry late in the afternoon. At around $400 return for two and the vehicle, the 45-minute crossing is not cheap. It can be rough at times as it crosses from Cape Jervis to Penneshaw.

An hour-and-a-half later we were bashing along a badly corrugated but wide, red dirt road looking for the address we’d been given. The island has two distinct zones: the small east end and the scrubby, remote west. Nature then splits it conveniently into the placid, rolling green north and the untamed south.

Essentially the only sealed roads on KI are a few coastal access roads and a loop road that arcs its way around the western part of the island then joins back at the ferry on the north-east tip. The rest of the roads are well-groomed (in the main) gravel. Surfaces are either red dirt, ironstone pea gravel, or topped with vivid white, smooth limestone. The Guz was well-mannered on all the surfaces and any modern Adventure Tourer or road bike would make a great mount to explore the amazing KI. 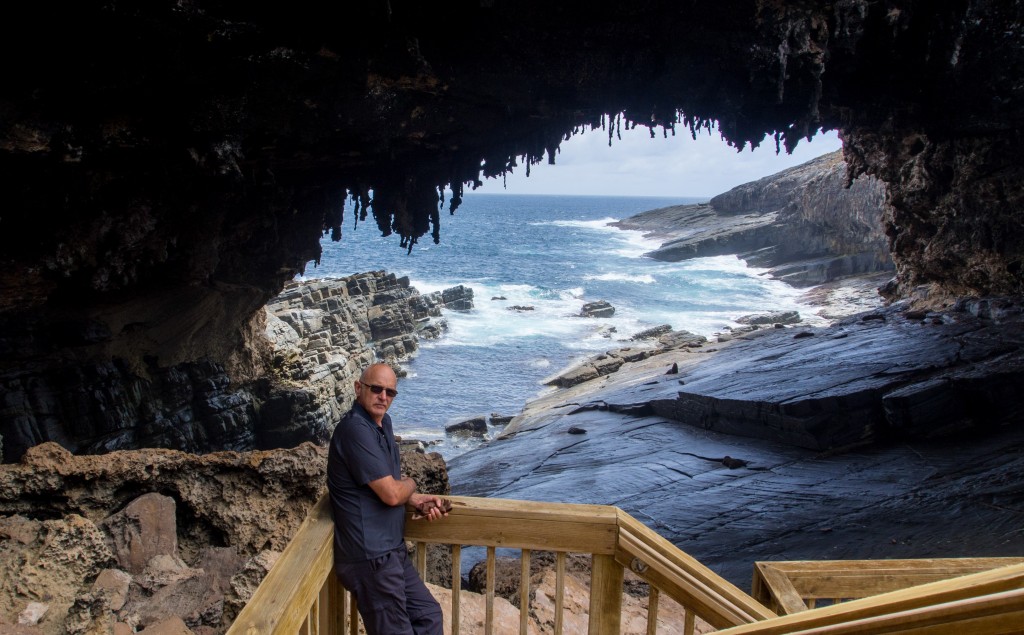 Way back when, as the land bridge with the Fleurieu Peninsula eroded, the first inhabitants left KI alone. It stayed this way for thousands of years. White fellas finally came across it around the time Napoleon and Nelson were slugging it out in Europe. Ironically, Matthew Flinders was exploring and charting the north side while a French dude named Baudin was doing the same on the south coast. They bumped into one another as they rounded the east end. Although officially at war, they compared notes and had the equivalent of a few beers. The south coast still carries many French names.

The south coast has been pounded by the fury of the Southern Ocean for millennia, making it a staggeringly beautiful place on a sunny day. Wind-carved rocks, seal colonies and stories of tough-as-steel lighthouse crews attract visitors from all over the globe. Most seem content to be herded on and off busses looking for unspoilt views at which to point their (freshly bought duty-free) cameras. Access to the national parks that cover a large portion of the island are a bit pricey, but an all-park pass can be had for around $70.

In contrast, the north side is in the lee of nature’s ferocity. Easily managed dirt roads lead over spectacular rolling hills to pristine bays and white-sand beaches, some of which can be ridden straight onto. Don’t forget ya togs! 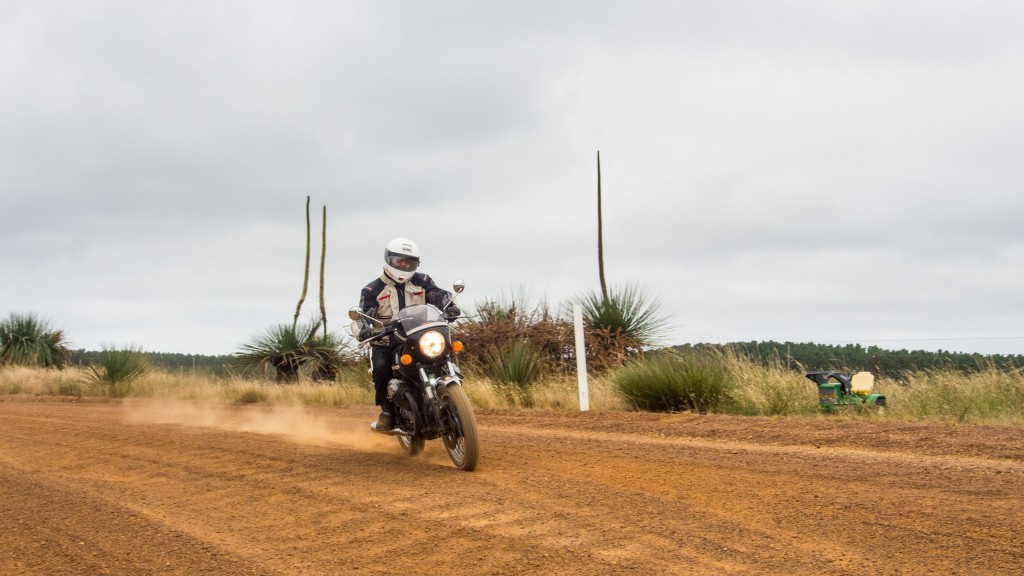 A white, smooth and fast North Coast Road took us east on a day ride towards the main town of Kingscote for a meal and resupply. While we were taking a few tourist pics at the port, we nearly stepped back onto a seal sunning itself on a nearby rock.

We fell in love with Western River Cove and took a chance on riding there late in the arvo for a dip. Now it’s not called Kangaroo Island because of its shape. It’s teeming with the buggers! After one of the best briny dips ever, we headed back to the farm. Yep, not just a house, a whole bloody farm, complete with a dam full of yabbies, an ATV and huge pile of firewood. Dawdling along at 30 clicks on the old Italian two-wheeled tractor, wrapped in the most gorgeous dusk with a large mob of roos as escort, the reason we were here dawned. Motorcycling in the slow lane! We rarely cracked 80 on the T3’s VaugeLiar (Veglia) speedo. No knees down, not blasting to the next coffee, but stopping frequently, taking time to enjoy the sights, sounds and smells of one of the most pristine environments in the world. 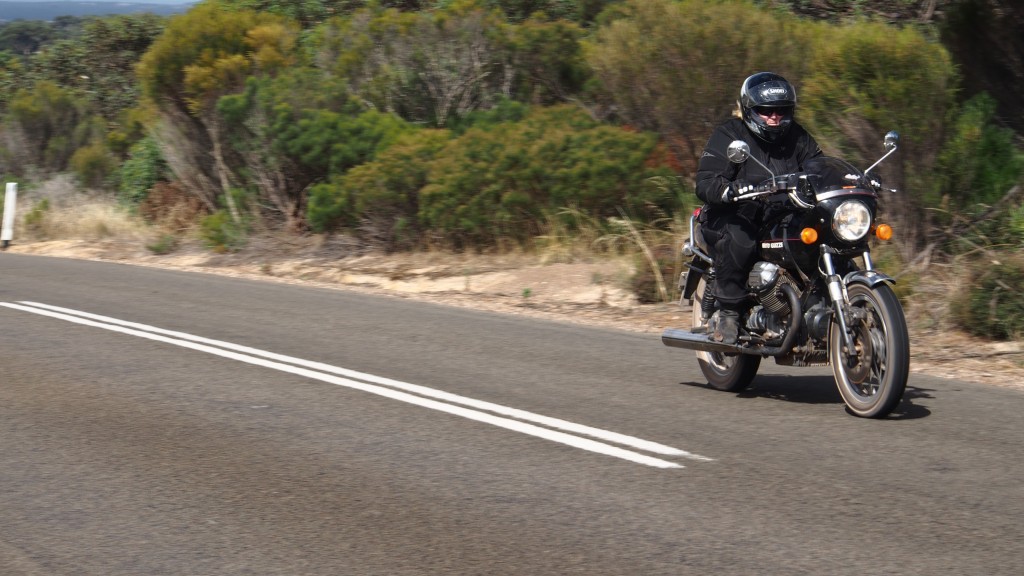 Accommodation ranges from fabulous camping spots, basic pub rooms to $3.5k-a-night resort suites on all parts of the island. Fuel is expensive and not readily available, but basic planning ahead will help avoid running out. Wine and food is one of KI’s big drawcards — fresh seafood, cheeses and lamb to tempt any foodie.

Probably the worst road on the island shakes bones all the way out to the very north-western corner, Cape Borda lighthouse. To follow the self-guided history tour is to get a serious grounding experience in how to cope when the dishwasher fails! Back in the days when the remote lighthouse was inhabited, every single household requirement had to be hauled up a massive cliff, then along a muddy track to the lighthouse. Possibly the prettiest camping spot I’ve ever seen is located at the top of Harvey’s Return, the place where they dragged up the supplies before hauling them a further 5km back to the lighthouse. 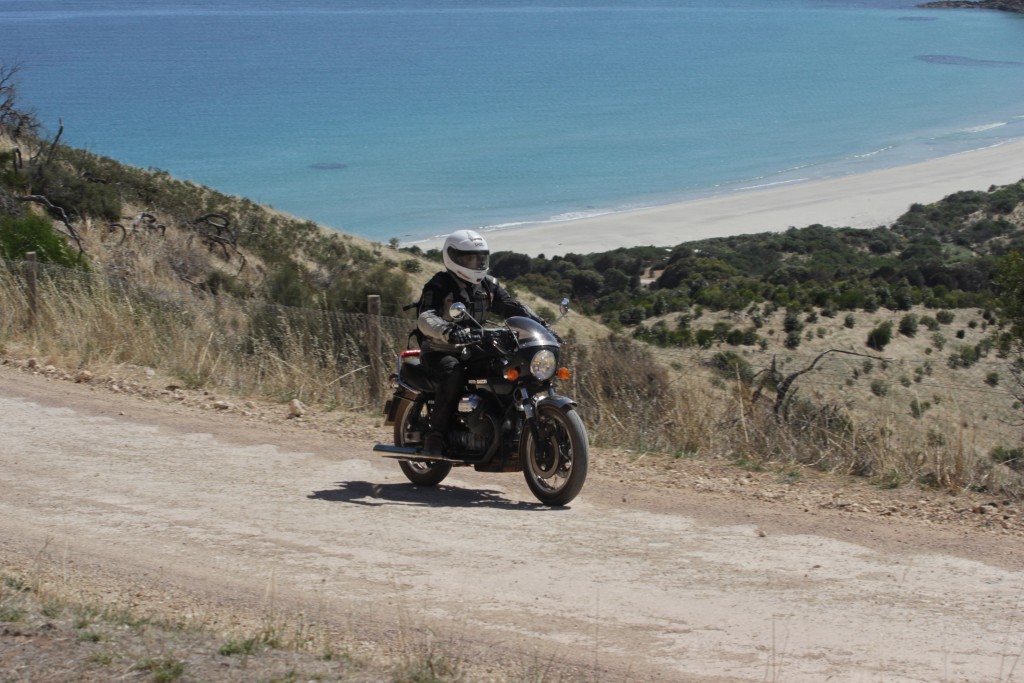 If, on a trip to KI, you’re looking for the sort of riding experience that Tassie provides, you’ll be disappointed. Rather, squirrel away 10 days and head there with a view to having a slow and plodding ride. Relaxed cruising around a rugged, stunningly beautiful place that has been cut off from the mainland for millennia will reward you richly with a refreshing break to remember.

Make any bike into a tourer.

You can add what you need to many bikes to go touring. Check out the editor’s quick video about making the Kawasaki Versys 650 better for travelling.

Two wheels in the Lucky Country

Just a day’s ride from Melbourne, Robin Bowra was in very remote country and about to discover a solitude that he’ll never forget. “It was the first night out on the road from Melbourne, and […]

Two-up touring tips: a lesson for your pillion

Riding two-up is a partnership that can have devastating consequences if you don’t work together, and if your pillion feels unsafe they’re not going to work with you as part of the team. My wife […]