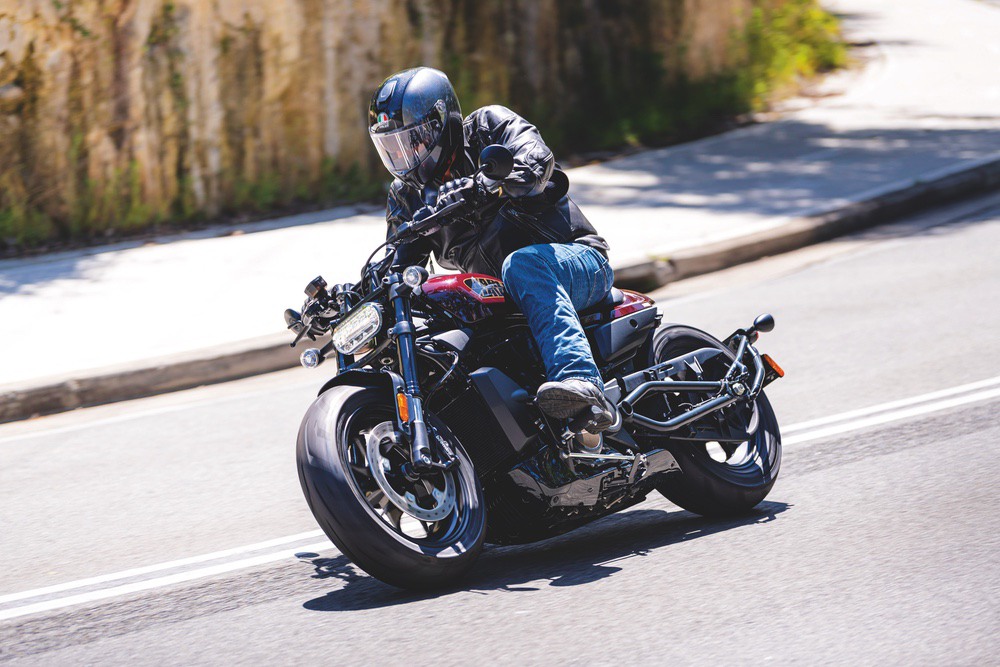 It’s not about the performance.

The first thing you should know about the Sportster S — it is not a sportsbike. The second thing — it’s a stonking load of fun to ride. It’s a 121-horsepower performance cruiser, with style, a low seat and an aggressive attitude the critically important features — at least as far as Harley-Davidson is concerned.

Forget practicality, forget comfort, forget sporting prowess or carrying a friend around, the Sportster S is about enjoying the ride and forgetting your problems.

That Harley’s engineers have managed to make a motorcycle from a design concept with stupid fat tyres, pathetic rear suspension travel and that hellishly convenient low seat that actually works as well as it does is a credit to them. 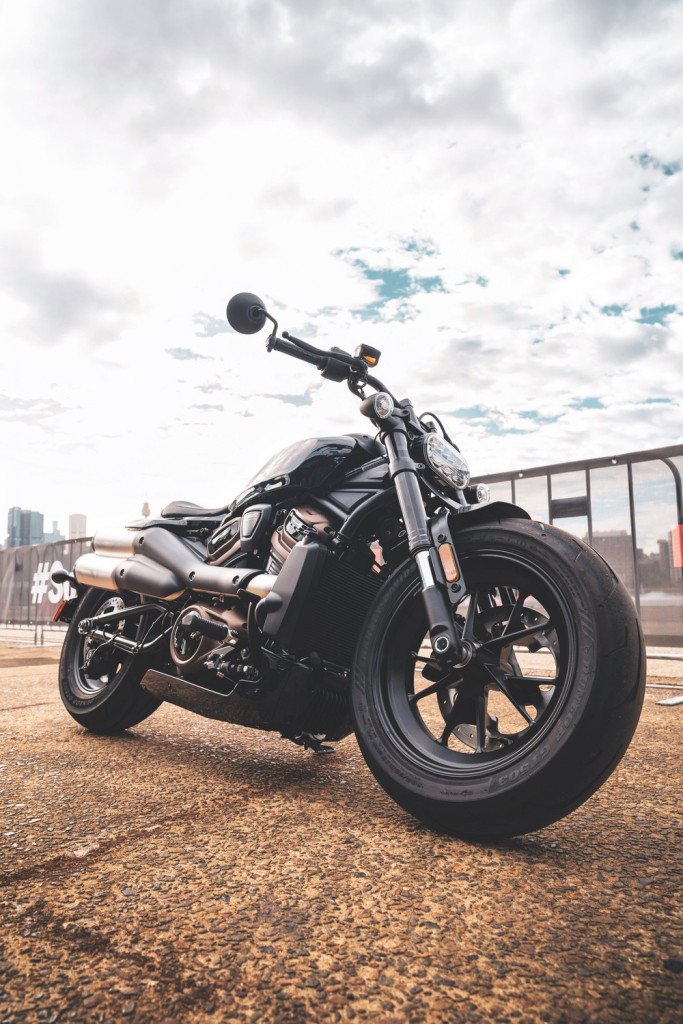 Harley’s designers came up with a concept that the company’s engineers managed to bring to life, with surprisingly little change between the drawings and the iron. It’s a thoroughly modern machine with styling cues to the past. The seat and high pipes scream XR750, the flat-track racer which dominated American racing for decades. The fat tyres remind one of the Sportster 48, a more recent machine, which in turn had stolen the idea from the classic bobbers of the past. The tank’s square shape is very much Sportster through the years, and the colours, graphics and “look” are quintessential Harley-Davidson, picked up and thrown into the 21st century.

The riding position features forward controls and forward-set handlebars, so your legs are stretched out comfortably ahead of you as you reach forward to the ’bars. I quite liked the riding position; it makes a compact bike feel a bit roomier than might otherwise be the case. 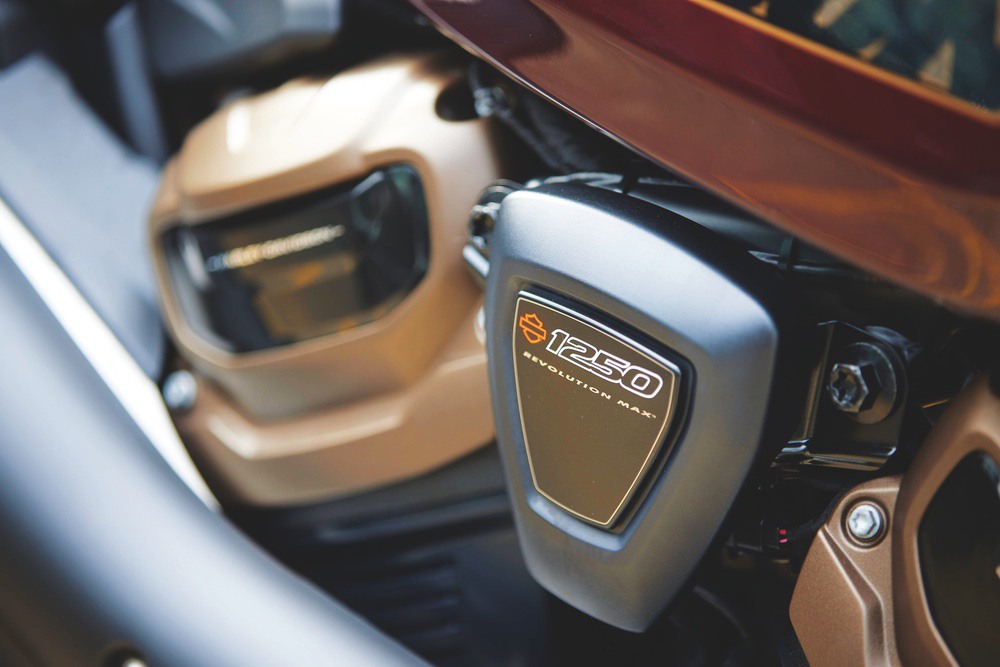 Take the Pan America’s 1250cc 60-degree V-twin, retune it to produce its maximum torque 1000rpm lower in the rev range, bolt it into a machine much lighter than the adventure machine and let her rip. And rip she does. Of course, it’s not the most powerful machine out there today — not even close — but it will see off any other stock Harley easily.

The engine is the focus of the bike, hung in the chassis as a pride-of-place V-twin, continuing Harley-Davidson’s tradition of building V-Twin motorcycles. Except it’s not really hung in the chassis, it is the chassis: the steering head bolts to the front, the seat and swingarm to the rear.

Although based on the Pan America’s engine, there have been a host of changes made to build the Revolution Max 1250T fitted to the Sportster S. The cylinder heads have smaller ports and valves and there’s a different combustion chamber shape, all aimed at increasing the velocity of flow to increase torque at lower rpm. There’s up to 10 per cent more torque between 3000 and 6000rpm, so you don’t have to wind up the Sportster hard to get serious motivation.

Other changes include the piston shape, design of the velocity stacks, camshaft profiles and Variable Valve Timing phasing.

“…THE SPORTSTER S IS ABOUT ENJOYING THE RIDE AND FORGETTING YOUR PROBLEMS.”

It’s high tech inside the motor — the four valves per cylinder are controlled via double overhead cams with variable valve timing, which improves bottom-end grunt while still offering excellent top-end power, and the wheelies I was able to pull showed there’s plenty of potential there.

It’s a smooth motor, too, thanks to twin counterbalancers. Harley likes to say it’s the right balance between feel and smooth but I dunno: I’m wondering if they went too far and sucked a little too much of that vibrating soul from the Sportster — and I like smooth motorcycles. Then again, I’m sure owners would get used to it.

Behind the motor is an assist and slipper clutch, six-speed gearbox which does not feature a quickshifter and belt final drive. I found gearchanges to be slick

and easy, although the lack of quickshifter in 2022 is pretty surprising.

Overall the engine is great. It’s got a good feel, it’s modern and smooth. There’s more than enough power and torque for the bike and if you find yourself left behind on road rides, it’s not the engine holding you back. 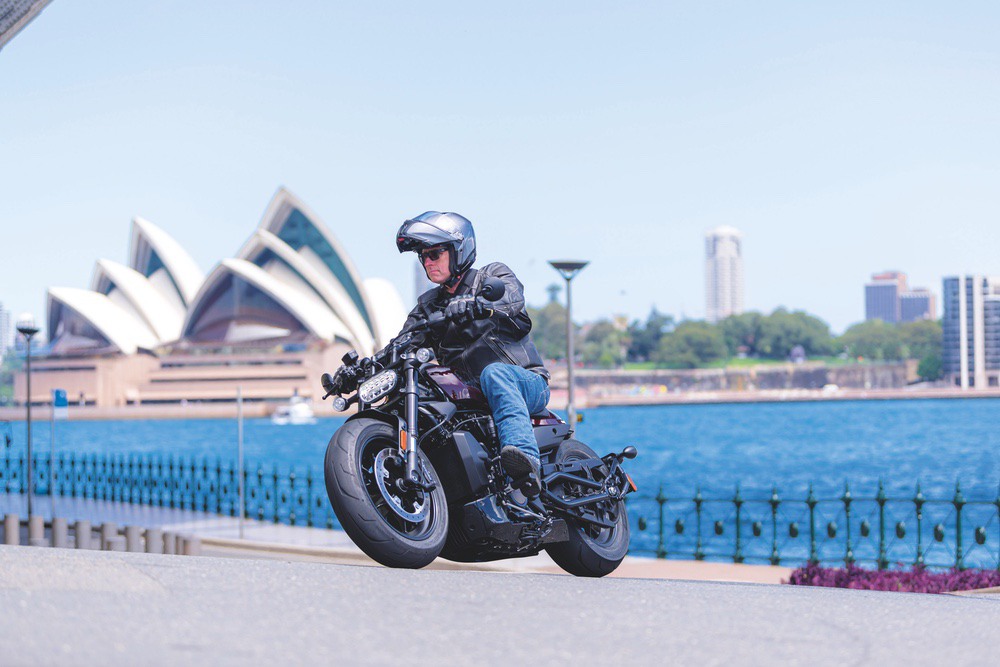 The style dictates the capability. In the pursuit of building a bike with super-fat tyres, an ultra-low seat, aggressive styling and historical features, engineering compromises have been made.

Those fat tyres — 17-inch front and 16-inch rear — aren’t going to work in the twisties like a set of low-profile sticky bags. So Harley asked Dunlop to design some tyres for the bike with a more rounded profile than you’d expect, and it’s worked; the bike rolls into corners far better than I’d expect and much better than the old Sportster 48.

The seat, with a racing number panel built in, is another nod to the past. Padding is a bit thin and even on a shorter ride I was reminded just how good the seat on the Pan America is. Unlike Harley’s adventure bike though, this seat is low — at 750mm it’s as low as motorcycle seats usually get, especially on a litre-plus machine.

So the padding’s thin to keep the seat height low, and so is the suspension travel. The rear wheel rises and falls just two inches on its suspension travel, and I just had a few readers turn the page when they read that. Hopefully not too many though, because not only is it a problem which can be fixed, the design, style and that fat rear tyre combine to make the problem far less of an issue than I expected prior to throwing a leg over the machine.

For a start, Harley’s fitted the Sportster S with a good-quality Showa shock, complete with a remote preload adjuster. So it’s easy to crank up the preload to suit your weight and the ride you’re doing. Second, aftermarket shocks will be available for the Sportster S and should be an affordable way to get some more travel, hopefully without compromising the geometry of the machine. The forks are also from Showa, 43mm inverted cartridge units.

In standard trim, riding the bike around Sydney, I was surprised how well the suspension worked, with only sharp-edged bumps really making their presence felt. Of course, being a week day in suburbia it’s not like we were exploring the outer limits of the bike’s performance, but within the design brief — in many ways this is a city bike — it performed better than I expected.

I’d like to try the optional mid controls because I think it could improve the already good handling and allow you to put some weight through the footpegs, which is great for sports riding and can take some strain off the lower back, especially going over bumps. Harley claims 34 degrees of lean angle is available on both sides, which is pretty good for a performance cruiser.

It’s also a bike which, in standard trim, has a solo seat. There’s a dual seat available as an option, but if you’re planning on carrying a pillion regularly, something with more suspension travel from the get-go might be a good idea. For those out there who want a litre-class performance bike with a super-low seat, you definitely want to throw your leg over one of these.

Braking is taken care of by a big single Brembo front disc and a smaller but still decent single rear disc. Harley seems to be the last of the big manufacturers to fit just a single disc to the front of its big motorcycles, and I wish they’d give up and just go to twin discs.

That front stopper worked absolutely fine on the road ride, providing all the stopping power I needed, with good feel. The rear brake is good too and it got a lot of use during the U-turns required for the photo shoot. But when we did some high-speed runs on the Sydney Cruise Terminal wharf for the cameras, I found the front brake somewhat overwhelmed — the bike just seemed to take longer to pull up than I would have expected from a modern machine. 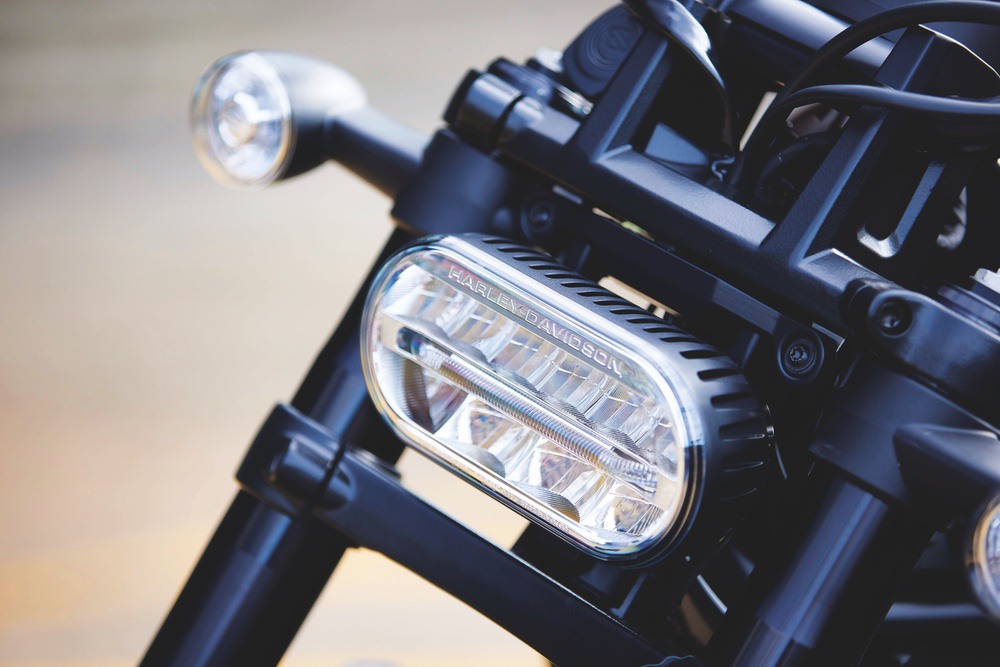 Harley-Davidson has fitted a beautiful circular TFT instrument panel to the Sportster S. Generally it provides all the standard info, but it can also interact with your phone and headset, with Bluetooth controls on the right switchblock. It can also do mapping via Harley’s excellent navigation app. The system is quite similar to that on the Pan America, which I used during my tour to Lightning Ridge featured in the last issue.

The electronic rider aids becoming quite common on high-end machines are found on the Sportster S.

There are three riding modes and two custom modes owners can set up the way they like them. Tyre pressure monitoring is also standard, as is cruise control. 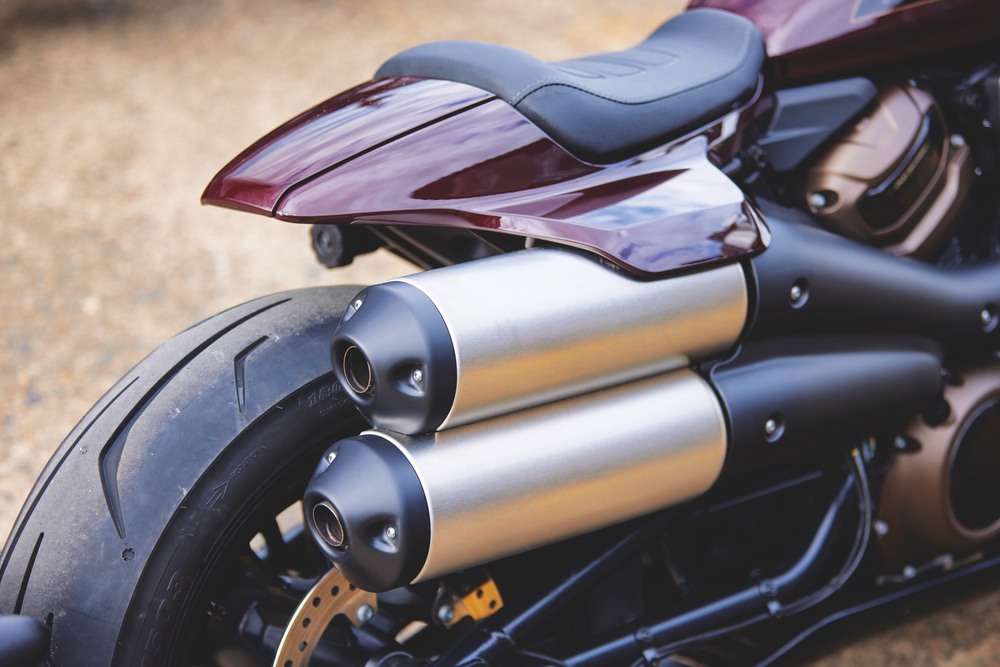 This is a fun bike to ride and it will make getting around the city enjoyable. With the fuel tank running to just 11.8 litres, touring might feel a little like riding between servos.

Harley-Davidson chose to launch the bike in one of the world’s big cities, and I think that’s because the Sportster S will appeal to those who want something cool to get around town on. It’s more than fast enough to go at whatever speed you like within city limits, and many will appreciate the low seat height at traffic lights more than they need longer travel suspension.

The Sportster S is big on style and performance, put together in a package that is relatively light (especially compared to other Harleys), quick and easy to throw around. It’ll outperform all the other bobber-style machines out there and has a classic yet modern retro design feel. If you love the design, need a low seat, aren’t fussed by the small tank and want something to get the adrenaline pumping, the Sportster S is definitely worth a ride. 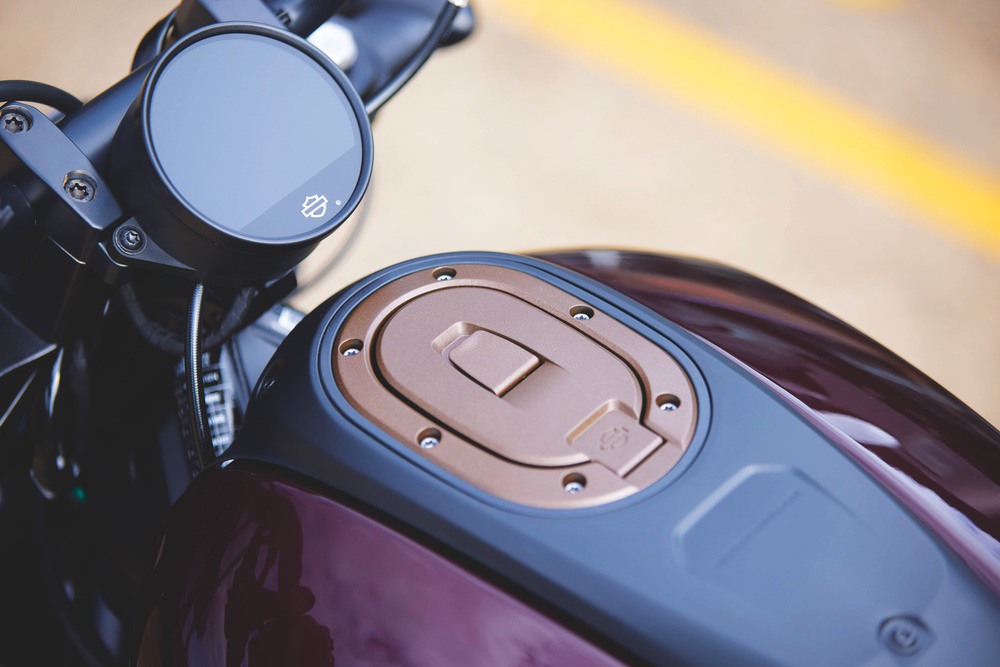 Chassis:     steel and alloy bolt-on to engine which is used as a stressed member. Tublular steel swingarm.

Harley-Heaven comes to Earth at Tempe

Even the man upstairs (who rides a Harley I am told) smiled down and granted superb weather. Located opposite the massive IKEA store on Princes Hwy and just a few clicks from the old location […]

Harley-Davidson has officially launched the Pan American 1250, its first adventure bike. Powered by the new Revolution Max 1250 engine, a 60-degree liquid-cooled V-twin which produces 150 horsepower, the Pan American looks to be competitive […]

The all-new electric Harley-Davidson® LiveWire™ made its European debut at a press conference held at the EICMA show in Milan. During the presentation, Vice President of Product Planning and Portfolio Marc McAllister revealed eagerly-awaited specification and […]