Triumph has thrown its globally strongest bike into the weeds and started again. Has it been too brave, or is this the best Street Triple ever?

They say there is no replacement for displacement. Indeed, that maxim has been widely applied by bike and car manufacturers from the Land of the Brave, with varying success.

While Triumph has never been shy of knocking out a big cubed bike – look no further than the behemoth Rocket III – its middleweight range of 675cc engines has held sway as a global sales winner, particularly in Street Triple guise. So, why has it been upped to 765cc for three of the new four model range of Street Triples? After all, they certainly weren’t broke. Why fix them?

Aha. Glad you asked. That’s been well motivated by Triumph’s coup of being announced as the engine supplier for Moto2 machinery for the 2019 GP season. That’s a huge get for Triumph, and it makes all sorts of sense to have a version of that engine powering its middleweights. Tooling, showroom synergies, parts… Oddly, there is no plan at this stage to bung the donk into the brand’s sportier Daytona range, but there you have it. Check the accompanying story for how the Moto2 deal came about.

So, to the guts of it. The new bikes exploit the new capacity via a heady electronics suite that includes ABS, traction control, and a ride-by-wire throttle with different throttle maps, the lot handled by varied rider modes. model receives a different combination of the aids on offer.

Yes, for the 2017 incarnation, Triumph has delivered us with four models, with both price and rider needs in mind. Let’s look at each, with a particular emphasis on the primo range offering, in the RS. 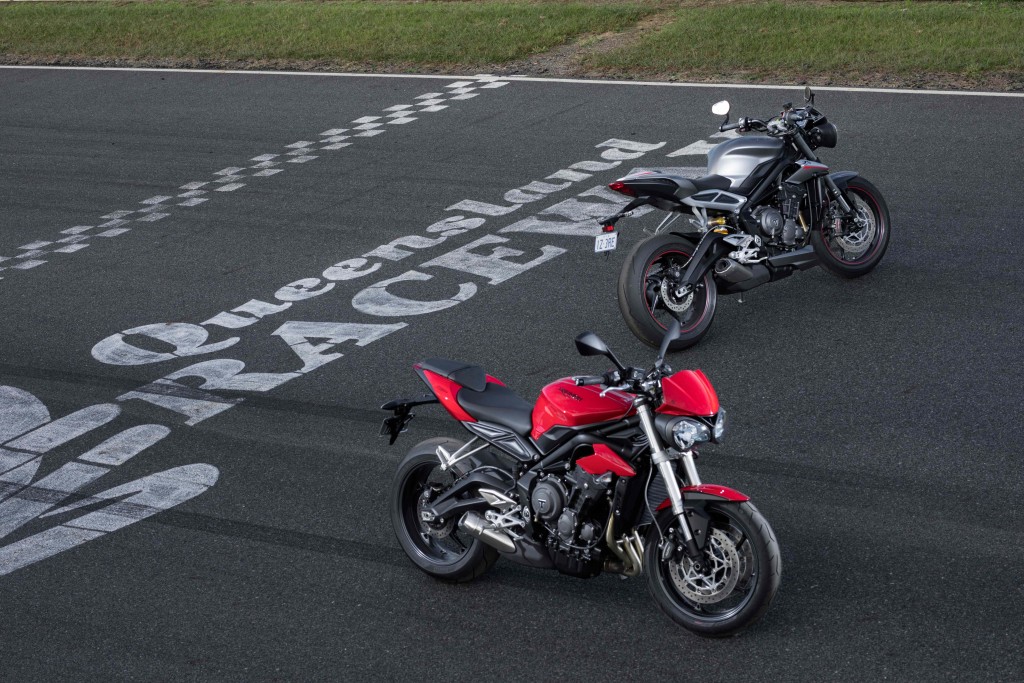 While the S wanders in a little stark, largely bypassing the Hinckley ‘wonderbits’ bin, it makes a good deal of sense on price. This one will set you back $13,800, and that’s a fair savings wad for a new lid, leathers and assorted rubber marital aids against the top of the pops RS job.

You get more basic suspension, non-radial calipers, pretty rudimentary LCD clocks, and only a couple of engine/TC modes with Rain and Road modes the only two maps available.

Where it does poke its tongue out at its posher family members is on the road, and ain’t that where it counts? It’s not as good, granted as those up the snobby-scale, but it goes bloody close. The seat height on the S is lower than on the RS, thanks to shorter travel suspension, which suited me fine at 178cm and offered a sure-footed feel. You get good quality rubber in Diablo Rosso Corsas. And, if you are not up it for the rent at every opportunity, I reckon the S deserves a hard look. Power is more than adequate and indeed identical to the RS at 121.2hp (90.4kW) at 11,700rpm and 77Nm at 10,800rpm

The science of the LAMS

This one is designed for the newcomer who still wants to buy into the Street Triple party, but has to serve his restriction, and it’s priced and specced to match. Capacity is 660cc and it carries specifications and geometry that mirror the S, with the obviously lower performance numbers of 54.4hp (40.6kW) at 9300rpm and 54.6Nm at 5200rpm from the smaller powerplant.

The bike makes its peak torque at a much lower with 77Nm registering at 9400rpm, a full 1400 revs lower than the S and RS models at the cost of some top-end with 116.4hp (86.8kW) at 12,000rpm making its way to the rear rubber. ‘Minimal’ doesn’t quite cover it. ‘Bugger-all difference’ in screaming power probably says it best.

There’s a big upside in those numbers if you care to take a close look. You see, all this manifests in the bike being a nicer thing on the road, allowing slingshot exits and much less gearbox stirring than demanded by the other models when pushing on. In fact, for the person looking to take in the scenery, this one is the pick for mine. It is still blisteringly quick, but a wholly more friendly thing 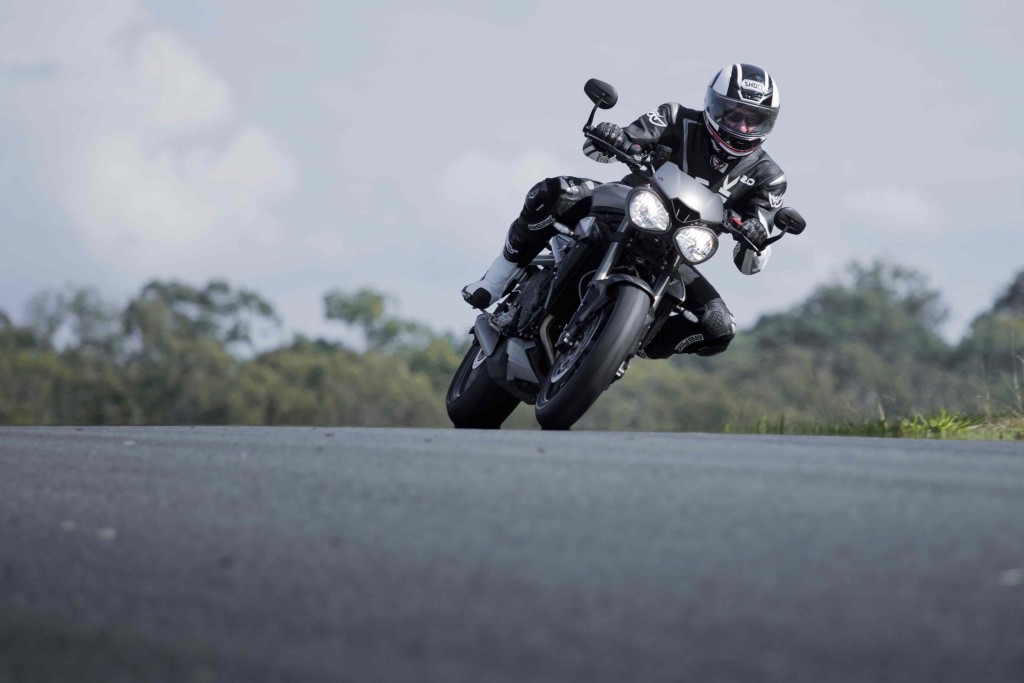 Now to the one we’ve all been waiting for. The top of the tree RS. And cop these apples. The RS gets has goodies than a Kim Kardashian shopping list.

In fact, the RS gets the whizbang five rider modes: Rain, Road, Sport, Track, and Rider. The modes control throttle response and levels of intervention from ABS and traction control.

When the bike is placed in Rain and Road modes, there is a ceiling in power in the first two gears to get a handle on rear-wheel slip before traction control is even called for. When it comes in, it does so very smartly in Rain mode, to completely limit rear-wheel slip or front-wheel lift. Road mode allows a limited amount of those to keep the fun factor in play. Response at the right grip is a tad more forgiving in Rain mode. Of course, Rain and Road modes are the only two modes available on the S model.

Bung it into Sport mode and the neddies free up in those first and second gears. Throttle control is all yours with ABS and traction control kicking in when you bugger it up. You are not left guessing in Sport mode with power hitting pretty damn full-on. I like that, but you will need to switch up your concentration. It’s a bit of a weapon. In stop start stuff all that will be a little snatchy, but with decent ‘go’ there is always a bit of a compromise. I might be old, but it’s a compromise I’m still willing to make.

The R and the RS get the all-singing, all-dancing TFT dash. You get to control the electronics package via a joystick control on the left handlebar and a display on the dash. The TFT dash is very easy to read and a big leap from the squinting we do with sunglasses on, peering at an LED screen. I loved it and reckon it will be demanded on just about everything soon enough. Big ups there. I’m no techo-nerd, but I found it pretty easy after a bit of practice to change the display to one I liked best. 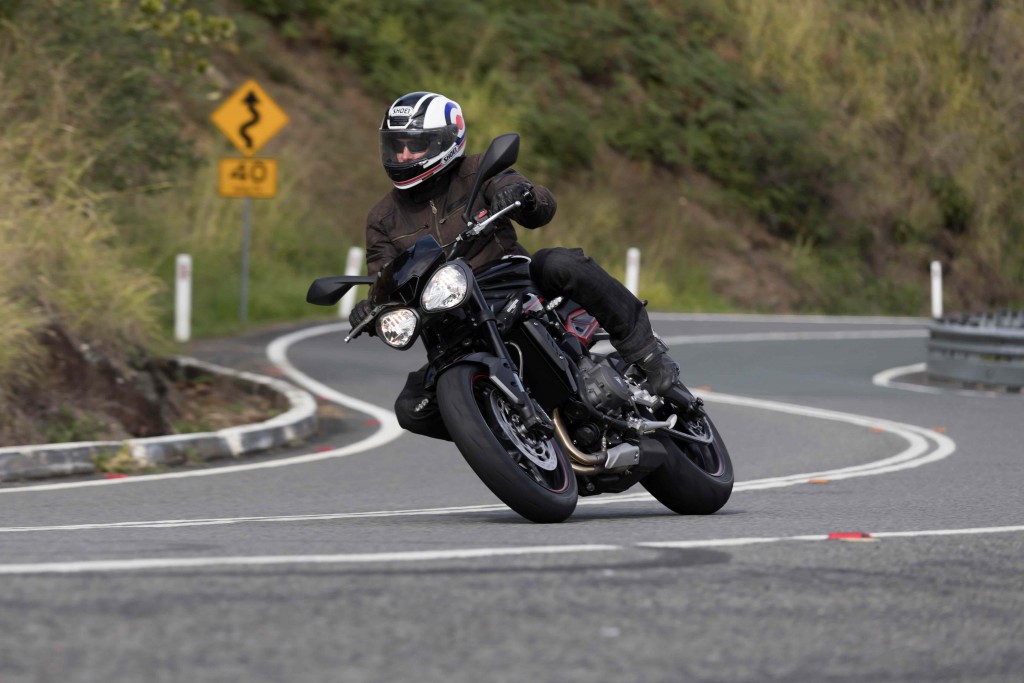 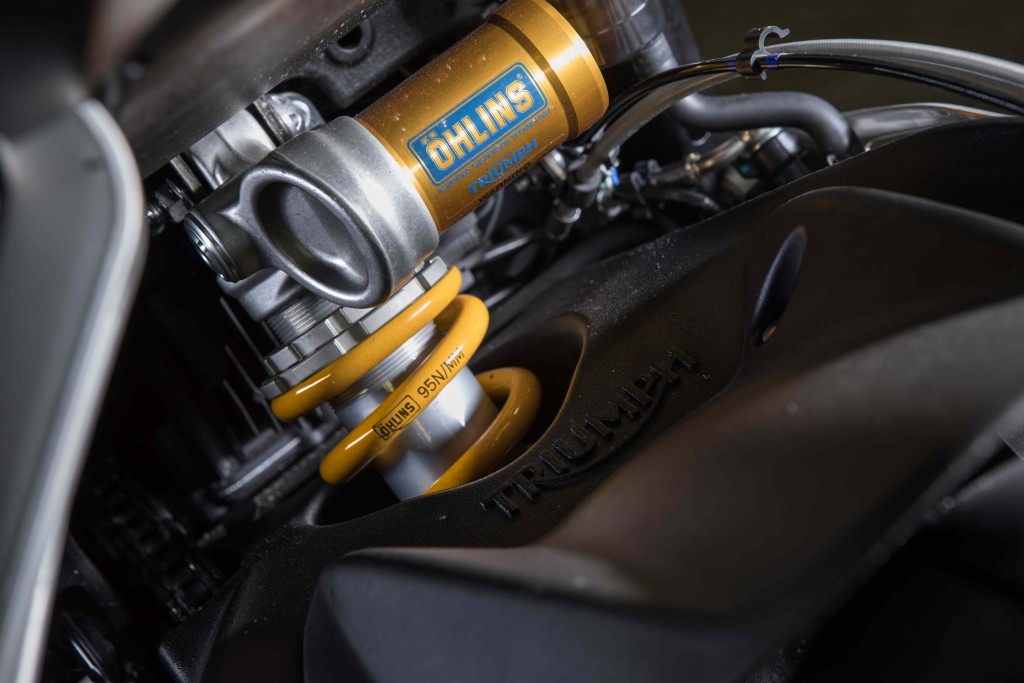 The RS is clearly a better performing bike than the rest. It’s bloody handsome, in a very masculine way. You get a colour-matched belly pan and pillion cover, as well as bar-end mirrors. It’s for the fair dinkum rider. Simple as that.

The RS is uprated all over the shop: brakes, suspension, electronics, style, and tyres are all tip-top on the RS.

If you opt for the RS I’m pretty certain you are gonna go all gooey on the strength of the fully adjustable Showa Big-Piston fork and Öhlins STX40 shock. All completely adjustable of course. Enough said there.

The RS has Brembo Monoblock calipers up front, which are controlled by a Brembo MCS span- and ratio-adjustable lever. This allows the rider to adjust both the throw of the lever and feel by altering the brake lever pivot to 19, 20 or 21mm. Grouse. And those flippin’ stoppers work. As they should. After all, this is the top-spec bike and you are parting with $17,550 for a middleweight. They are not giving it away at that rate.

The slipper-assist clutch is on both the R and RS, and the RS gets a quickshifter that lets you get your GP. It also gets a set of Pirelli Diablo Supercorsa SP tires, an upgrade over the stock Diablo Rosso Corsas. They won’t last very long, but the grip here was astonishing at Lakeside Raceway when we were let loose. Mind-bending grip.

So… This is an accomplished range. If there isn’t a bike there to suit you, you are not really interested in this segment. Pushed for a decision? In short, the R is my pick. I reckon it is a better road option if you are going to stay in that environment, and you can save a few bucks into the bargain.

The way it makes its power suits the road and it is pretty accomplished at everything else. If you can live with the old-spec instruments of the S, keep in mind that it makes the same power as the RS.

If you do the odd track day, get turned on by the Yellow and Gold of an Ohlins suspension set-up and wanna pull the significant others, I’d be saving up for the RS. There’s a lot of good stuff there.

Triumph Motorcycles will be the exclusive engine supplier to the FIM Moto2 World Championship, beginning in 2019.

Triumph has signed a three-year contract with Dorna – the commercial rights holder of MotoGP™ – to supply a dedicated race-tuned 765cc Triumph triple engine based on the powerplant from the all-new 2017 Triumph Street Triple.

The new engine is a significant development of the race-winning Daytona 675R powerplant that has powered Supersport wins at the Isle of Man TT, Daytona 200 and British Supersport Championships in 2014 and 2015.

Based on the highest specification 765cc powerplant from the Street Triple RS, it has been developed for Moto2 with the following modifications:

The race specification Triumph 765cc Moto2™ engine has been developed further to allow the engine to breathe more freely and rev harder than the production bike, increasing overall performance. Other changes have been made specifically to adapt the engine for race use.

Triumph is building a new Trident, and it’s going to be LAMS approved for new riders in Australia.   The new naked roadster is being shown off firstly as a design prototype with images of […]

Production Editor Spencer Leech gives his initial thoughts on CFMoto’s new 400NK CFMoto, as a motorcycle brand, has a hell of a lot to prove. Before it can seriously compete with its international rivals, it […]