In a hurry to get over the horizon? MV has created one very sporty tourer to help get you there

I was sitting at the red light, staring intently at the gear-position indicator in the top-left of the busy dash, as my left foot played hide-and-seek with neutral. Frustratingly, and as was too often the case when the bike was hot, the gearbox was winning and it wasn’t until a polite toot from the car behind that I realised the lights had changed. It peeves me greatly when people don’t pay attention at traffic lights and the irony was not lost on me! 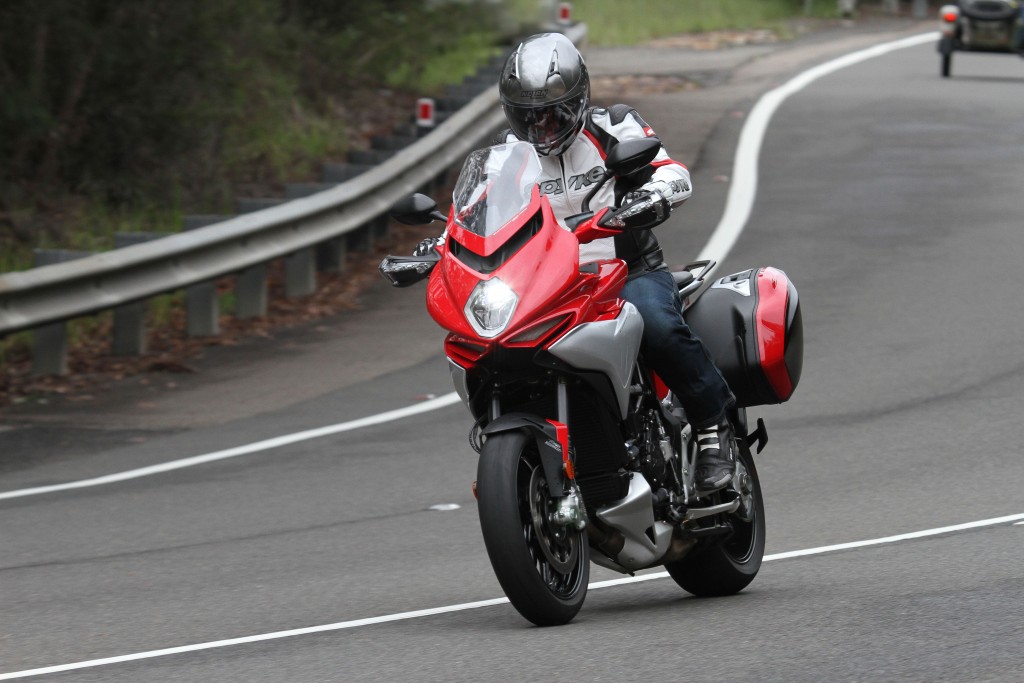 Embarrassed, I dumped the clutch and gave the bike a big handful. In response it shot across the junction, the engine making a noise like tearing metal, and proceeded to skip the front wheel off the tarmac all the way along the following straight as I banged through the ‘box, making full use of the quick-shifter. Blimey, that’s a bit frisky, I thought as I slowed down, especially for something wearing touring bodywork and hard luggage. But then this is a bike built around essentially the same motor that’s in the Brutale and the Dragster, so perhaps I should have been less surprised. Even though this iteration has been detuned to 110hp (82kW) and 80Nm for a less revvy, more torquey experience befitting a touring motorcycle, the 800cc three-cylinder MV engines have always punched above their weight and this one is no different, exhibiting an invigorating step in power at around 6000rpm, like its stablemates. 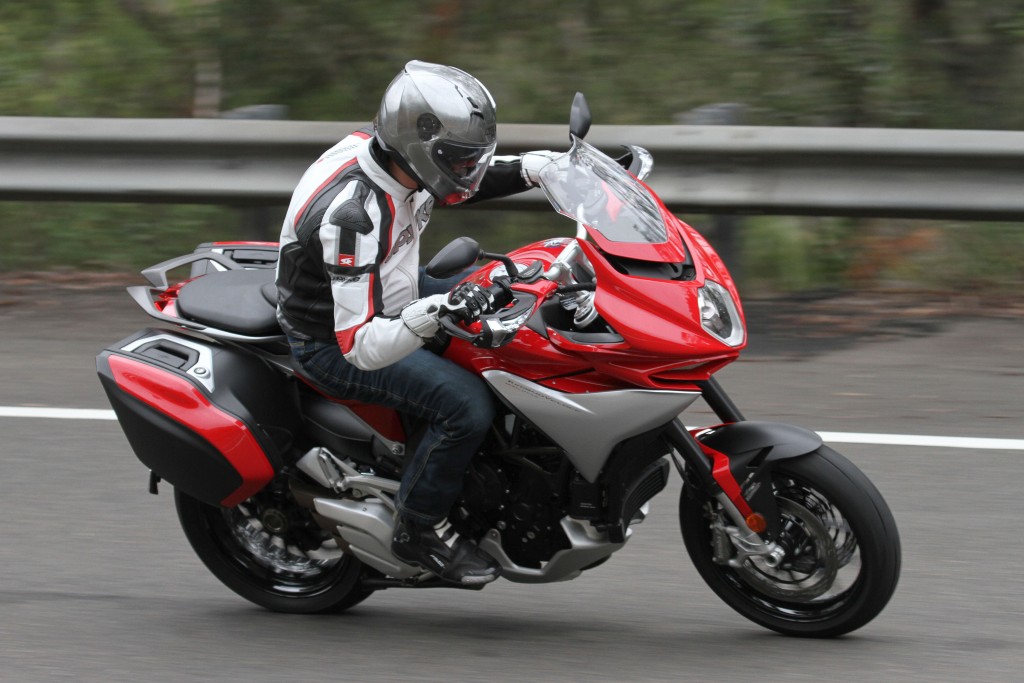 The Sports Tourer segment originally came into being when manufacturers were looking for a way to flog their stock of outdated big-bore sportsbikes and as such were often a step behind in terms of handling and performance, not to mention technology. MV’s first dip into this market is definitely not such a machine and if you like your sports-tourers soft and doughy, then look away now because this bike is taut and whatever the opposite of doughy is. In common with all of the MV range, the Turismo Veloce is stiff, noisy and difficult to resist riding in anything other than a frantic manner. The finger of blame for its frenetic pace can, in part, be pointed at the inclusion of that quick-shifter, which, if you choose, works on the down-change as well as the up, demanding that you screech up to every junction in a flurry of auto-blipping fury and squealing brakes. At town speeds this is perhaps not quite as accomplished a system as some we’ve ridden, but once beyond the snarl of traffic, the ability to ignore the clutch completely makes this bike an absolute hoot to ride. 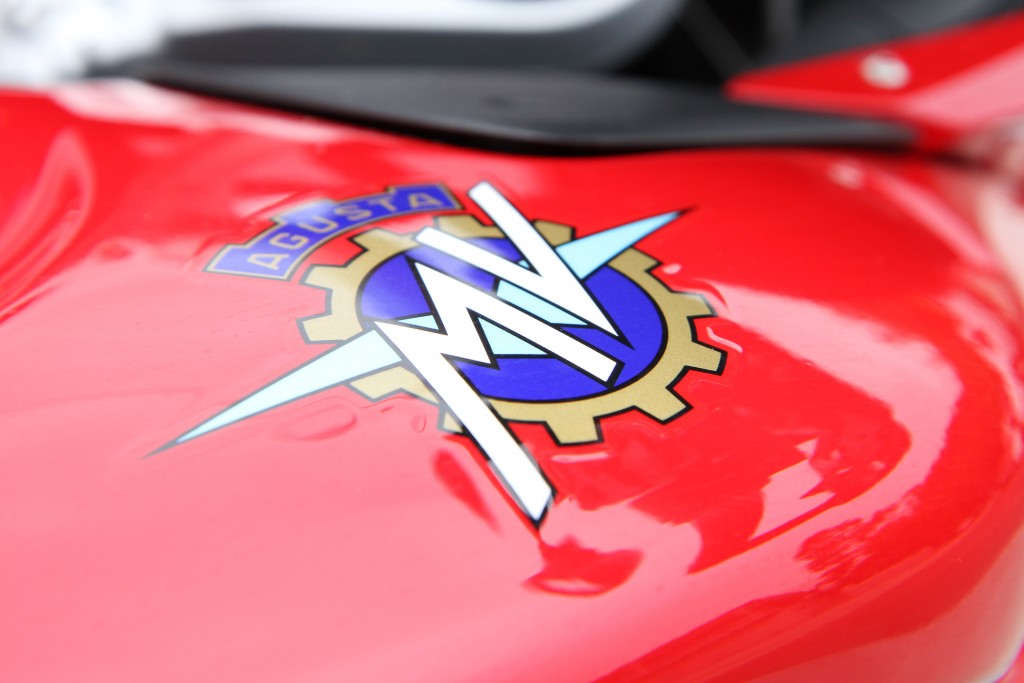 However, there are two distinct sides to this bike’s personality and, if you’re all hooned-out and facing a long motorway stint with a pillion and some baggage (are they not same thing?), you’ll be equally well served by what the Turismo Veloce can offer. This is where the massive amount of technology packed into the bike comes into play. For a start, the electronic suspension can be adjusted for preload from the dash by telling the bike how many people are aboard and how much luggage. Then you can decide if you want the damping to be soft, medium or hard from within the comprehensive settings menu. Then you can call up the Touring engine map which limits the power to 90hp and gives softer throttle sensitivity. All of which change the feeling of the bike and make it easy to cover the miles in a more relaxed manner. But hang on to your hats because it gets a lot more involved than that. 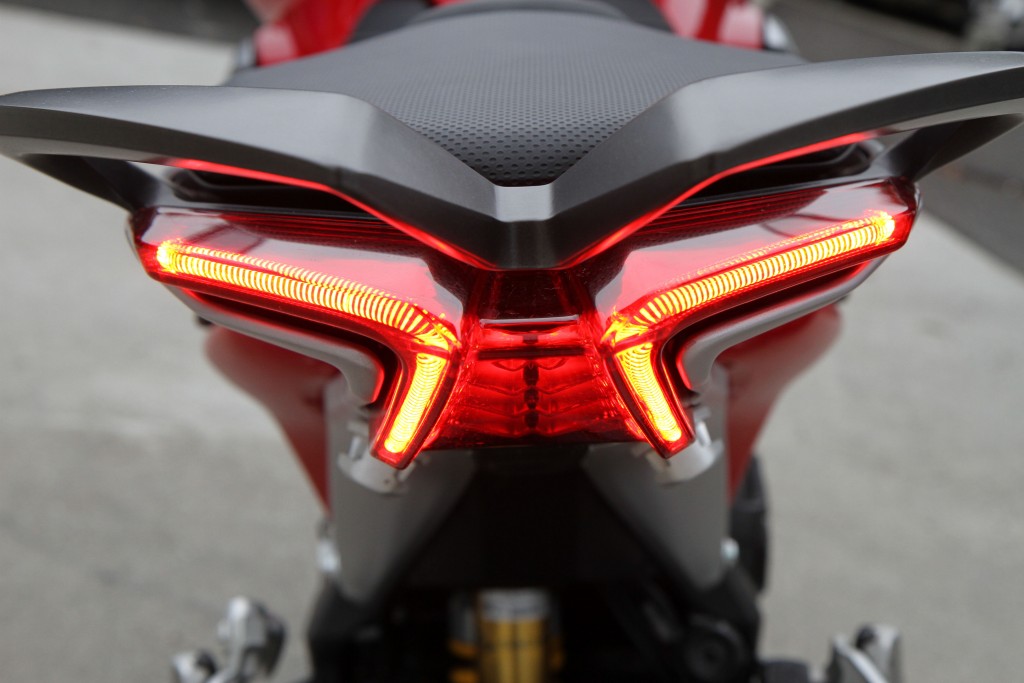 How about increasing or decreasing the engine braking, or setting a speed limiter, or dialling up more traction control, or changing the rev-limiter characteristics from soft to hard. There are many ways to make this bike suit your own requirements and that’s before we even get to the part where you can set it, and the suspension, up from your phone (see the sidebar below). Fortunately, navigating through it is way more intuitive than you might imagine — pretty much all controlled from a single button on the left switch-block. 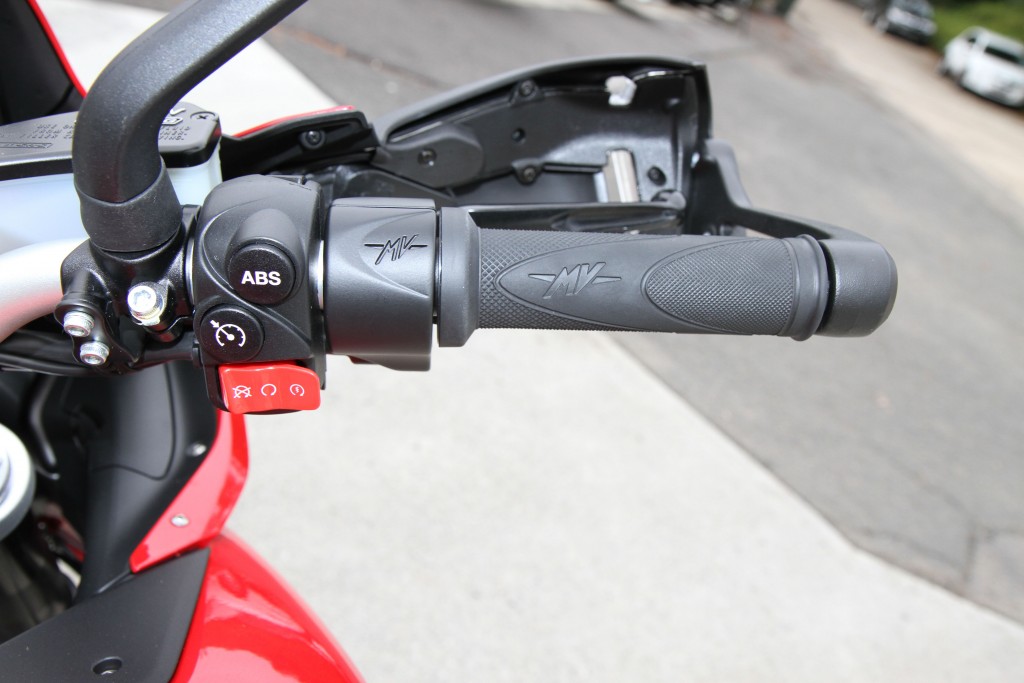 The one area that’s a bit of a let-down is the difficult-to-operate cruise-control. No self-respecting touring bike these days can be without cruise and the benefits to your license, levels of comfort and fatigue are huge. However, for it to be of any use, the system has to be simple and convenient to use. The MV’s is neither. For one thing it only functions in sixth gear, which means it’s pretty much useless anywhere except the freeway, but the real issue is how much scrolling about on the dash you need to do to access the controls and to then adjust the speed once set. It’s a complicated fiddle involving both thumbs and requires simply too much time scrutinising the dash and not looking at the road. It’s badly thought-out and renders the system too frustrating to bother. 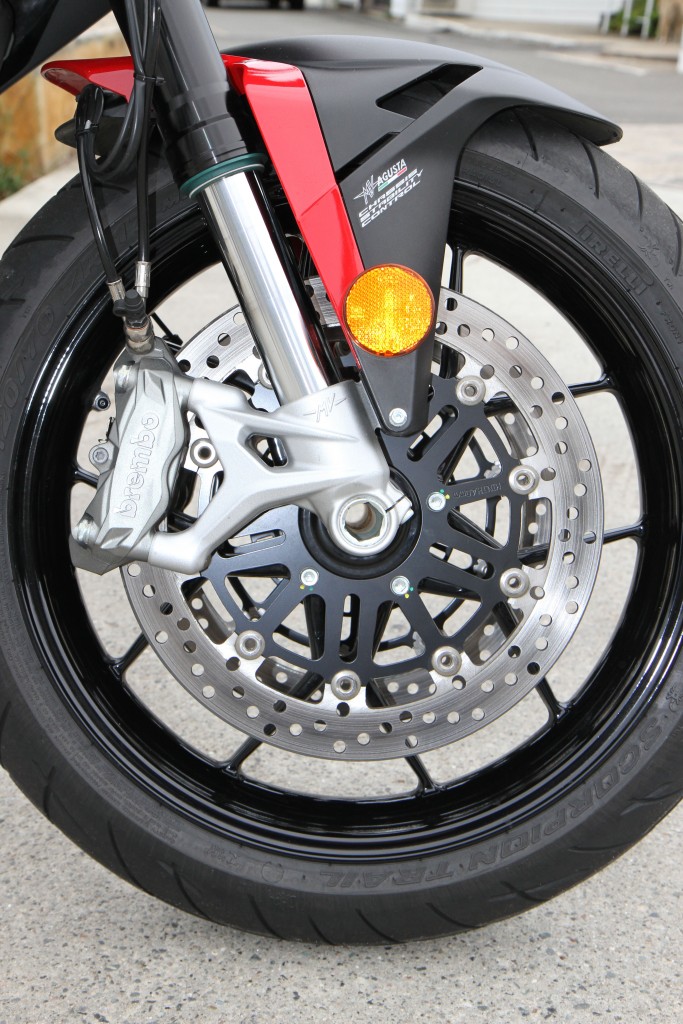 That annoyance aside, the Lusso is an easy bike to ride over distance and will cover well over 300km from its 20-litre tank with the 6.3L/100km fuel economy we averaged. The generous 850mm seat height and upright stance gives the rider good vision ahead and its un-intimidating 191kg dry weight makes it easy to move about either on or off the bike. Not surprisingly, for this is a lovingly crafted Italian motorcycle don’t forget, the optional, colour-coded hard-luggage looks about as integrated into the overall design as any pannier has a right to, and the bike bristles with nice touches, great build quality and excellent components. Not only that, it’s utterly beautiful to look at. The front fairing alone is a convoluted concoction of splitters, air-intakes and ducts, housing a diamond-shaped headlight, the perimeter featuring a bright LED daytime-running light.

The protection offered by the hard, aerodynamic hand-guards means the fairing itself can be less bulky, and they help further clean up the front by having integrated indicators (in conjunction with the heated grips expect no issues with cold hands either). The sculpted angles of the tank flow seamlessly out of the fairing, swooping back to meet what must be the most stunning rear sub-frames in existence. It’s not often we get excited by such things, but just look at it! It’s a brilliant and modern take on how the back of a motorcycle can look — and not only is it unique in its styling, it also cleverly houses the minimalist mounting bracketry for the luggage. 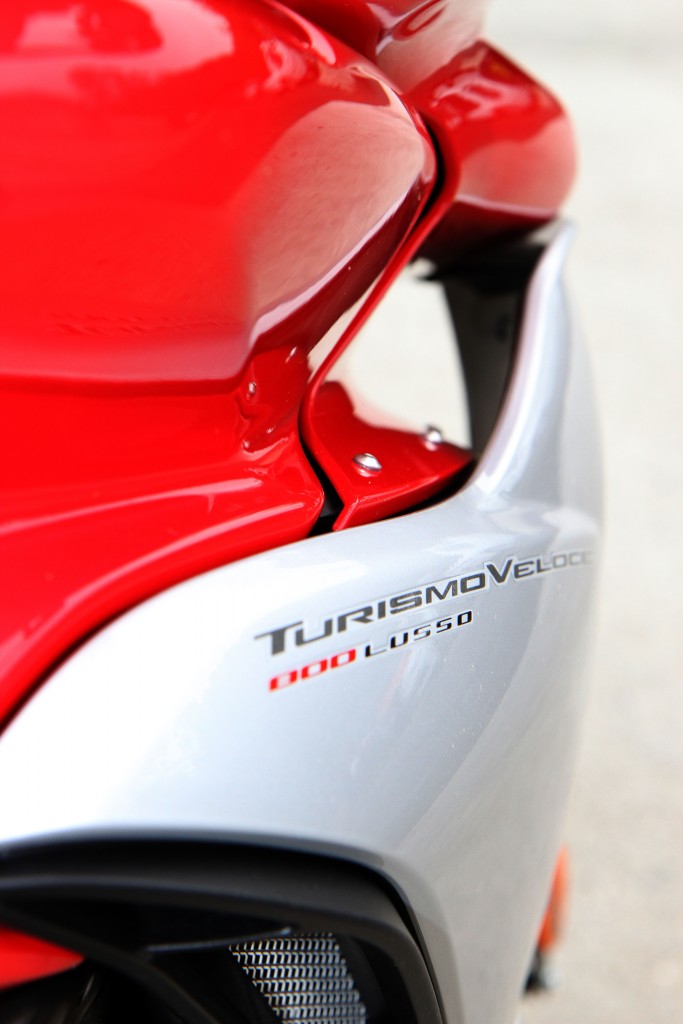 The four slotted lugs on which the side-cases hang are unobtrusive, and attaching or removing the 30-litre bags is the work of seconds, meaning it’s a no-brainer to take them off for commuting duties. Watch out getting dirt between the mating surfaces, though, as the fit is precise and lining up the holes for the security dzus fasteners (which keep the cases attached to the bike) can be difficult.

When your route takes you away from the freeways or when you’re just out for a morning blast, the Lusso shakes off its more sedate nature with a few button presses and turns back into a full-blooded weapon. The handling is awesome for a start, and tipping it into corners feels natural and sure-footed. Feedback through the front USD Marzocchis is superb and the leverage from the wide-ish ‘bars is spot-on. Ergonomically I prefer this to either the Brutale or the Dragster and you feel very much in this bike rather than curled up around the headstock like you do on the other two. The combination of Nissin master-cylinder and Brembo calipers makes for superb braking performance, with masses of power, great initial bite and bags of feel — one of the nicest set-ups I’ve experienced in a while. Also, the 17in, dual-compound 120-front and 190-rear, Pirelli ScorpionTrail tyres are as soft as chewing-gum on the edges and offer incredible grip wet or dry. Along with their shallow profile, this makes flipping from full-lean to full-lean very confidence-inspiring (they also offer a modicum of off-road ability if your conscience allows you to get something this beautiful peppered with stones). Add that to the lean-angle-sensitive traction control and you can really pin this thing out of turns. Certainly in the lower gears at least, this often results in a bit of cool opposite-lock action as the motor comes on strong and the front wheel goes light. 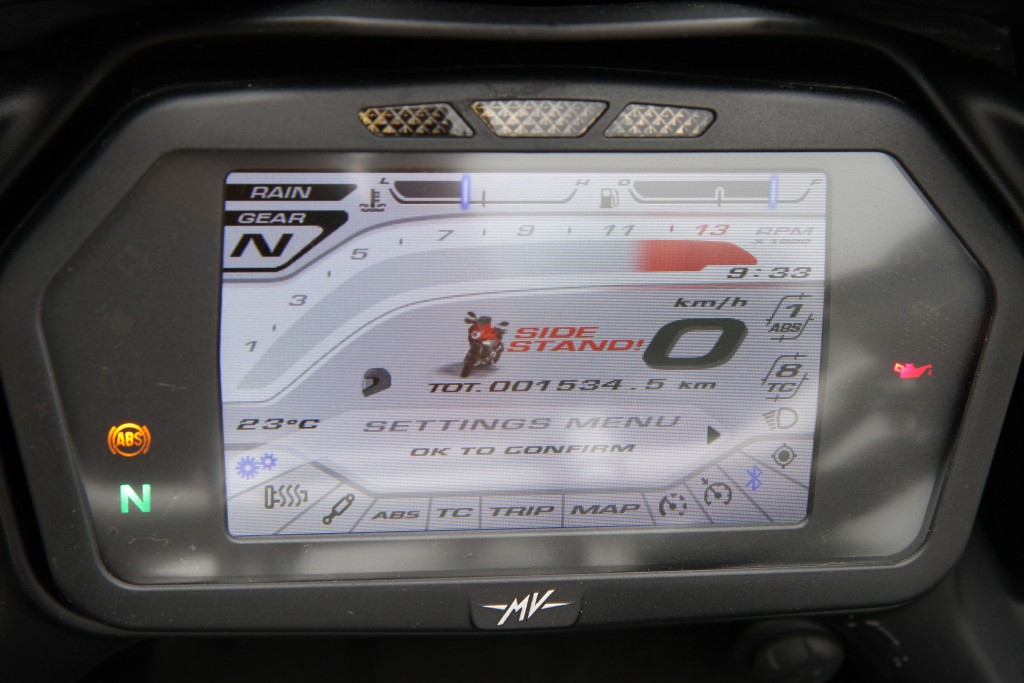 The suspension is hugely adjustable, particularly when you get into the guts of the MV Agusta app, but to be honest, apart from some slightly suspect compression damping from the Sachs rear shock towards the end of its stroke, once I’d set the suspension to Hard in the menu, I didn’t feel the need to change anything else when making the most of the Lusso’s sporting personality.

One thing I would have liked to change is the overly complicated dash. It does have some super clever features, mind you, such as the ability to invert its colours at night for less glare, but these days there ought to be at least the option to customise the display to your own liking. Give me a big speedo, a big tacho, time-of-day and a trip and I’ll be happy. Other info only needs to show itself when accessed. This isn’t difficult to achieve nowadays and some manufacturers are already on it. 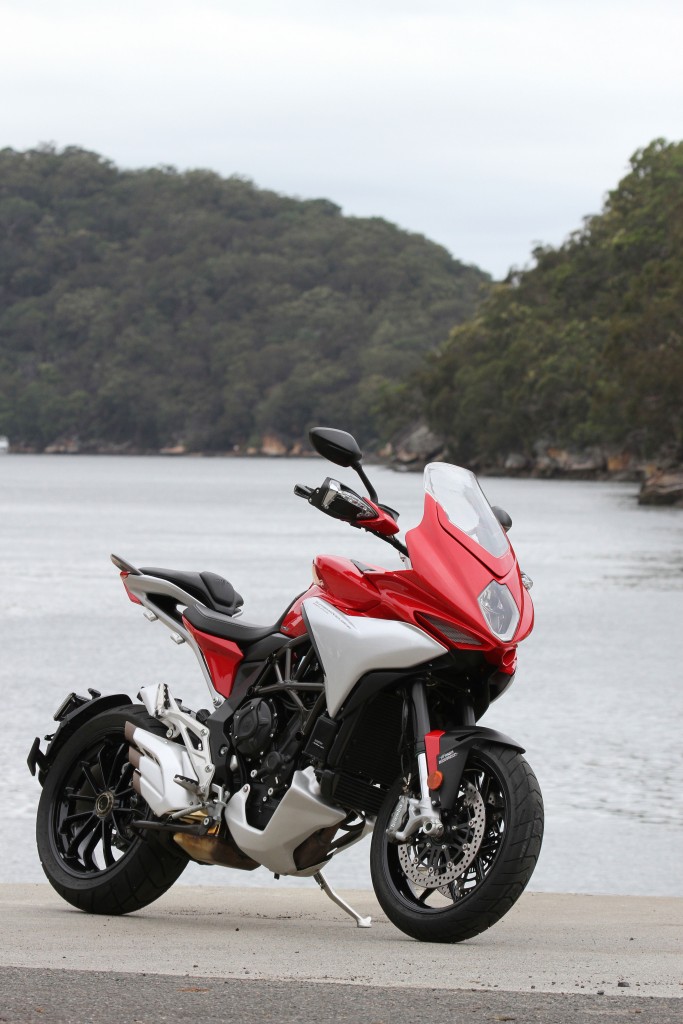 Gripes aside, for a bike trying to achieve the two opposite functions of being a proper tourer and an excellent sportsbike, the Lusso is very satisfying to ride. It’s not compromised at all when the going gets fast-and-furious and yet can be a docile mile-muncher when the time comes. There are certainly cheaper bikes out there in this category, but none of them comes close to this level of specification, technology and exclusivity and certainly none is as stunning to look at.

We can’t wait for a longer (and dryer!) test on one of these and the chance to really explore the immense set-up options, but so far it gets a pretty big tick from us.

It takes MV Agusta Paramatta dealer principal, David Song, a bit more than just a new bike to get him excited. But he was clearly as proud as a new dad with the sparkling pre-release […]

MV Agusta tears the covers off its updated Brutale 800 RR To further refine the flagship Brutale, and to comply with Euro4 emission regulations, MV Agusta has overhauled the 800 RR for 2017. The new naked MV […]