We talk to the King of the Kustomisers

Buy one of Arlen’s machines and you become part of the clan. The customers who buy bikes either in person from the 70,000-square-foot headquarters of Arlen Ness Enterprises in Dublin, California, or from another shop, or over the internet, or by phone often seem to feel that they have joined a fraternity rather than just upgrading their transport.

Many of Arlen’s customers even become part of the Hamsters, his distinctly tongue-in-cheek “patch” club.

You can see the man himself, sitting in his glass-walled office or working alongside his staff on some new bike, as an enigma. But you can also see him as the plainest of plain men, absolutely straightforward both in speech and dealings. 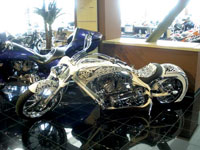 The mind that created the breathtaking elegance of Smooth-Ness, the rococo sparseness (yes, the two can go together) of Ness-Tique and the over-the-top outrageousness of Two Bad is housed in the body of a dapper, slim guy with a spare white beard and a shock of white hair who would not stand out in any group of middle-aged bikers.

Except he would, of course, because it wouldn’t be long before someone recognised him.

Arlen is probably not as well known among the general public as some of the Hulk Hogan look-a-likes that fill the ranks of the TV bike customisers. (Oddly enough, he did once design a bike, the Hulkster, for the real Hulk Hogan…) But he’s very well known indeed among the cognoscenti. He’s also known for being approachable and friendly at the many rallies and trade events he attends. He’s … well, he’s beginning to sound a little bit too good to be true.

The guys at Victory Motorcycles Australia had arranged an appointment for me to meet Arlen, which is not always an easy thing to do. His time is well and truly filled — although whether he has a spare moment or not, when a bunch of French Ness-heads arrives on a bike tour (as they did when I was there) and naturally wants to be photographed with The Man, he makes time.

He’s also very well aware of the power of the press, as I discovered later. He credits a lot of his early success to the magazines that featured his creations on their covers, and he made a point of meeting their needs.

But on this day he was late.

Not that that’s a problem in the airy, glassed-in building in Dublin. There are plenty of interesting bikes to look at on the sales floor, and on the mezzanine there’s a museum of some 50 of Arlen and son Cory’s most spectacular creations. If you’ve followed the Ness story by way of those magazine pictures, as most of us have, you will be absolutely blown away by the original bikes, which are just lined up as if waiting for their riders outside a bar.

I later found the Peter Max bike, one of my favourites, sitting somewhat forlornly out at the back of the warehouse.

When Arlen finally arrived he was most apologetic and sadly told me the reason: a close friend had just had a stroke. That’s a good enough reason for lateness any day… We spent a few minutes bemoaning the onset of age not just in our friends but also in ourselves and found ourselves chatting like old buddies.

The business is quite varied and includes creating and building new designs, building replicas of existing designs for customers, consulting for Victory and designing and making accessories. There are now Arlen Ness accessories for Harley-Davidsons, Victorys and other metric cruisers including all four Japanese brands. Then there’s the clothing range as well, and the straightforward retail operations of the store. Cory runs the day-to-day operations now, leaving Arlen to deal with what he calls the “PR” side of the business, something he clearly enjoys. He’s good with people.

Arlen can sound a bit too good to be true, sure. He’s been married (to the same woman, as he says with a note of satisfaction — or is it wonder? — in his voice) for 50 years this year. He is the patriarch of a close family that now includes not only his son Cory but also grandson Zach as custom bike designers. He’s successful not only artistically but also in business, yet I couldn’t find anyone who would even hint that the success is anything other than well earned. He operates in a staggeringly competitive world, yet he never had a bad word to say about anyone. He doesn’t boast; in fact, he’s quietly self-deprecating.

He is what he is: a man who hides the steel that must be there in his character very effectively though probably not deliberately, and clearly enjoys his life. Mind you, the introduction to what amounts to his 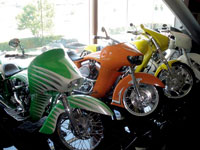 autobiography (see below) was written by the notorious Sonny Barger of the Hells Angels. He’s a friend of Arlen’s, it seems.

Anyway, while it might be easy to judge Arlen by his success, by the business and the Lamborghini Diablo and all the other trappings, I suspect that he would consider his family and the wider family of his customers to be more important. Not that he doesn’t think about the industry he embodies.

“For a lot of years, I was on top of the pile,” he says. “Now that there are so many builders doing great work we all share the limelight, but there is plenty to go around. I hope we can stay in it and keep building our brand, which is really the Ness name. Maybe the family will stay in it if they’re interested. We’ll see who wants to. I’d be proud if all four grandchildren wanted to work here and eventually run it. Then it can just keep going.”
“It” is a lot bigger now than it was before Arlen established his relationship with Victory Motorcycles, at the turn of the century. Arlen and Cory have both signed on as design consultants with Victory and the company markets Signature models created by both of them. But their influence goes much further.

I had always thought that Victory had approached Arlen. After all, it makes such a lot of sense; here’s a new brand with, therefore, very little street cred and here’s a guy who can provide them with that very thing, because he has credibility to burn.

In fact, though, Arlen told me that he had made the first move. He saw the bikes at a trade show and was immediately impressed, but he could also see that there was room for a lot of improvement with the styling.

Now the arrangement cuts both ways. Victory’s engineers help Ness with technology and technical solutions while Arlen and Cory provide the styling (and the credibility) cues for Victory.

If you’d like to find out a little more about Arlen Ness and his background and bikes, let me recommend Arlen Ness — The King of Choppers by Arlen himself and Michael Lichter, Motorbooks ISBN 0-7603-2219-8. It’s pretty much the full story and I didn’t feel like rewriting it or stealing too much from it (quite unusual, yes, I know).

As for me, I’m pleased to have met Arlen Ness. He’s not just outstandingly talented, he’s a truly nice guy in a business where that character trait is not quite as common as it might be. And if you’re ever surprised in some town by a bunch of guys on brightly coloured choppers with Hamster patches on their backs, don’t run. Go find the one with the little white beard and the square sunglasses and see for yourself what Arlen Ness is like.