Go your own way

Your gleaming new ride is parked out front, its engine ticking gently as it cools. You’ve just completed your first major ride and you’re delighted with it — salting away all those bucks has paid off big time. Now you’re part of the tribe, you have a long list of places you want to head for and some good mates who’ll cheerfully be part of the fun. And your new bike is perfect.

Maybe you thought it looked a little, well, anonymous; bland, maybe. Perhaps you thought it could do with some tougher wheels, a little extra chrome, some skull-shaped indicators or a little artwork on that muted bodywork. Call it a personality transfusion.

Welcome to the vast and growing world of customizing.

Tweaking a bike to suit its rider’s personality better has been going on as long as there have been motorcycles. Some go the tough way, reworking engines or chassis in the pursuit of extra performance; others look for longer-range seats and luggage; still more transform their ride into mobile artworks.

The good news is that not much of the stuff we’ll be looking at requires specialist skills or tools. Adding accessories, such as a sissy bar, can require the use of a screwdriver or spanner, but usually that’s about as far as it gets. Even fitting those shotgun pipes won’t take much more than an afternoon and some basic hand tools.

The Australian accessory market is well-stocked with a broad range of gear from home and abroad. Typically, local manufacturers tend to look at the practical rather than the purely cosmetic and that in itself says much about the Aussie “style” of customizing. Rob Roughton of Australian Motorcycle Components (AMC) echoes the point. Among his more popular lines are gel-padded accessory seats, tool rolls and saddlebags.

We’ll expand on this theme of fitting practical accessories in later stories. In the meantime, you’ll find Rob’s range of stuff at www.hogheaven.com.au and www.justcruisers.com.au.

Looking, looking, looking…
If your taste runs to aesthetic extremes, it’s probably best to look at what the US and Japanese markets are doing, where the custom bike and custom car communities swap ideas with greater relish than here. 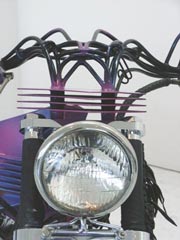 Consider this: a few years ago the thriving American GoldWing community began to fit circles of tiny LEDs to their disc rotors. These lit up whenever the rider squeezed the brake lever and became known as the “ring of fire”. Thought outrageous at the time, these are almost passé now. Instead, more enterprising riders in the US and Japan are fitting LED accent kits that give their bikes a full-blown Christmas-tree-glow. Go here http://www.customdynamics.com/stingerz_led_accent_lights.htm and you’ll see what we mean.

Historically, customizing has been driven by the Americans. Designers such as Arlen Ness, Paul Yaffe (Mr Billet) and Indian Larry (the bobber king) have set the standard for leading-edge custom motorcycles and have done their bit to generate a flourishing components market for those who can’t afford or don’t want the complete — and often costly — bike. Being Americans, their market understandably favours US hardware, which typically means Harley-Davidson. But things are changing. Go to the Arlen Ness website (www.arlenness.com) and you’ll find a warm welcome regardless of what you ride. And the stuff of Ness legend, such as his chrome-plated handlebar grips and foot pegs, are offered for bikes from all four Japanese makers as well as Milwaukee’s finest.

Others aren’t quite so wide-ranging. At West Coast Choppers (www.westcoastchoppers.com), Jesse James tends to keep the message pure, so while you’re drooling over his range of aggressive-looking wheels, air-filter covers and aluminium battery boxes, remember they’re for Harleys.

It’s cold up there, and cool
After a sluggish start, the Europeans are now coming up with some of the most breathtaking custom motorcycles it’s possible to imagine and it’s the Scandinavians and Germans who are leading the way. While you’re on your virtual tour of the customizing world, look in on www.thunderbike.de. These guys, in Hamminkeln, northern Germany, also like their H-Ds but offer a range of parts for Yamaha and Suzuki, too and, being European, don’t mind tinkering with sports bikes, either. While you’re there, check out a bike called “Open Mind”, which won the 2008 European Championship of Custom Bike Building and is about as outrageous as custom bikes come in the first decade of the 21st century — it’s the stuff of inspiration … or nightmares.

Highway Hawk is a Dutch outfit that offers a full range of custom goodies for bikes from just about everywhere and for all parts of the bike — from chromed nuts and bolts to cables, seats, running boards, exhausts, coffee mugs, even leather-tassel brake/clutch lever covers and rat ornaments. Have a look around the company’s website because there’s plenty of interest. And, best of all, Highway Hawk has an Australian distributor in the guise of Metric Cruiser Customs (MCC) (www.metriccruisercustoms.com), based in Brisbane. MCC represents a number of local international suppliers, including Küryakyn Products, whose popularity is thundering along. And why not? This enterprising US outfit offers a vast range of products for Metric cruisers and Harley-Davidsons — would you believe flame treatment and hog’s head gearshift linkages?

That bling thing
If bling’s your thing, take a virtual saunter around the shelves of www.chromeworld.com.au and you’ll find a wealth of glamour to add to your bike, regardless of its provenance.

If you’re a Harley-Davidson rider, don’t forget to check the range of goodies Harley itself has to offer through its Screamin’ Eagle brand.

Of course, some products and services are best discussed face to face or at least over the phone. Paintwork, for

example. Want a few flames licking along the side of your fuel tank or a likeness of someone special? Check out these guys: www.twistfactor.com. This New South Wales outfit offers a full range of painting services and is no stranger to motorcycle work.

John Allman who’s in Smithfield, NSW, is also a good hand with the spray gun. He’s come to the party on Australian Road Rider projects in the past and when we do more on the subject of custom painting we’re certain to talk to John. In the meantime, if you want his expertise, you’ll find him on (02) 9725 5600.

There’s nothing quite like feeling the heft, checking the finish and chatting to knowledgeable folk about embarking on the experience of customizing your bike. You might want to check out the range offered by general accessory supply shops such as Motorcycle Accessory Supermarket (www.mcas.com.au).

You’re in good company. Here’s Rob Roughton of AMC again: “Where the market in sports bike accessories seems to be declining, we’re not seeing much of a downturn in cruisers. People are still coming in for their saddlebags, running boards and mirrors. Perhaps that’s because cruisers attract a range of different riders.”

So there you have it. Diversity is strength and cruisers are certainly not a one-size-fits-all proposition. Whatever you want, though, it’s out there; and wherever the journey takes you, it starts at the same point: in your imagination.
BG