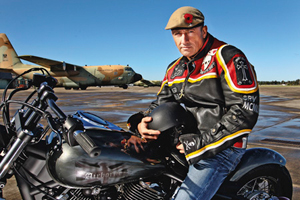 After surviving a horrific free fall, the only thing that kept broken and battered paratrooper Franc Herring going was his custom bike dream

“I could feel the razor-sharp night air whip past me as I spiralled out of control toward the ground, plummeting through the threatening darkness. I dropped like a rock. Treacherous weather over England had created a frightening ‘air steal’ that generated a vacuum and sucked the air from our chutes. My canopy collapsed and rendered me helpless in the face of pending disaster. Wind gusts lashed round me and I could hear the bullet-like sounds of other soldiers whipping through the air in the blinding darkness around me.”

It was a routine secret drop in the night skies over the UK countryside in 1994. Franc Herring was a UK Special Forces soldier operating with SAS colleagues, French Foreign Legion troops and US Special Forces Delta soldiers. All of them were caught in a massive air-drop bungle that saw countless soldiers injured and several lose their lives. 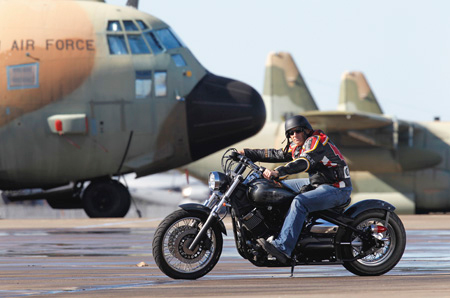 Swirling winds buffeted the soldiers as they prepared to jump from their Hercules C-130s. Franc’s canopy collapsed the minute he jumped. It was as if he had jumped with no chute at all. Falling and unable to help himself, he smacked into another Special Forces soldier, sending him plummeting like a dart towards the ground.

Franc’s own body hurtled downwards and after an eternity drove him into the ground like a garden stake. The impact had such momentum it forced his knees sharply upward, striking his face and shattering his jaw, eye sockets, nose and teeth. Worse, the near-death fall splintered Franc’s spine.
By all accounts Franc shouldn’t have survived the shattering fall, but after 14 hours of surgery at the world-renowned John Radcliffe Hospital in the UK he was in the recovery ward. His jaw was wired shut, he’d had facial reconstruction and would need to learn to talk from scratch and, worst of all, the prognosis was that he might never walk again.

Franc was drawn into a new world. He endured 11 months of pain and hour upon tedious hour of rehab and recovery. There was little break from the monotony, only a TV set showing Home and Away and his own thoughts, dreams and desires.

His thoughts: to one day live in the lucky country just like he’d been watching on Home and Away. His dream: to walk again. And his desire: to own and ride a motorcycle. In those dark hours his bike “Dakota” was created, designed and (in spirit) built.

After a military discharge, meaning Franc lost his career, he was a lost soul.

“I needed to learn to cope with a life and a body that had been shattered and find a way to rebuild,” he said. “I chased my dream to live in Australia. I needed the warmth for my body, too — the titanium pins in my back ache in the cold weather.

“Australia led me to the Destino Custom Garage. I needed to build my bike as badly as I needed to walk again. I knew exactly what I wanted in my head, but it’s actually a scary thing trying to explain that to someone else.

“Jimmy B extracted every morsel of my thoughts down onto paper for the design of the bike’s final build. Nik really helped me delve into the reasons why I was making Dakota and this helped her design the paint scheme and overall look of her.

“Apart from fulfilling my dream to ride, Dakota is really a tribute bike to the fellow soldiers who died and to those that live and breathe this way of life. 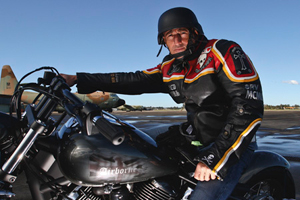 “She asked me to give her one word to describe the feel I wanted. For me, it’s ‘haunting’.

“On the day of the unveiling I was beyond excited. I must admit I was really nervous, too. I trusted these guys but you just never know what you’re gonna get.

“I had all my mates gathered at the Coogee pub for the delivery. I heard this mean-sounding bike come up the road with Jimmy on it. Mate! The bike was beyond my wildest dreams. She was everything and more. I gave these guys my dream and they brought me a work of art. Dakota is a dark charcoal colour, like a midnight sky on a parachute drop. She has a worn British flag in an eerie ghost form on her tank. It’s ripped and torn and looks like its flapping in the wind as I ride her. On top of the tank I look down on a scene of paratroopers dropping from a C-130. It looks like I’m waiting to jump next.

“The rear of the guard has the paratroopers’ skull and mantra on it. It’s quite a scary image, which I like. There is this amazing eeriness about the bike. There’s this fog in certain spots over the charcoal, so it looks like the paratroopers are jumping through cloud and the skull looks like it’s rising out of battle fog.

“The one word I would use to describe my bike is exactly the one I wanted: ‘haunting’.

“Every day I have pain. The difference now is that I have my bike to jump on and help me forget about my past and the pain. Moving to Australia in ’97 was the beginning for me. By the time I became a citizen last year and then celebrated with my new bike, the freedom I had been searching for was complete. Dakota was the motivator to get me out of bed and walk again. I learnt an incredible amount about myself and the human spirit during those months and years of recovery.

“I spend some of my spare time these days giving back wherever I can to the Vietnam Vets and The SAS Association. I’ll be attending the Scots College Military School shortly as guest motivational speaker to share my story. Of course, I’ll be taking Dakota — she’s really the star.”

Where to next?
Franc Herring is a member of the Sydney Vietnam Veterans’ Motorcycle Club and The SAS Association. Next year, Franc and Dakota have been invited to attend the US annual Rolling Thunder Ride from Seattle to Washington — a massive gathering of, reputedly, more than 400,000 bikes rolling over the Memorial Bridge. A sight and sound not to be missed.

Dakota is a dark charcoal colour, like a midnight sky on a parachute drop … On top of the tank I look down on a scene of paratroopers dropping from a C-130. It looks like I’m waiting to jump next.

The rear of the guard has the paratroopers’ skull and mantra on it. It’s quite a scary image, which I like. There is this amazing eeriness about the bike. There’s this fog in certain spots over the charcoal so it looks like the paratroopers are jumping through cloud and the skull looks like it is rising out of battle fog.

The one word I would give to describe my bike: ‘haunting’.

Want to know more?
Contact Destino Custom Garage to find out about their house customs that sell for around $19,900 or for a quote on your own special vision.