Busy, busy at the launch of Can-Am’s latest

Well, this is the end of my complaining about press junkets overseas. For years I’ve been sniping at The Bear and other writers for goofing off on bike launches in various beauty spots all over the globe while I did the hard yakka back here bringing in the advertising. Now I know that it’s actually hard work!

For various reasons I got the guernsey to attend the launch of Can-Am’s new RT and RS Spyders in Washington DC. Beautiful place, spectacular hotel, immaculately run launch. Thank you, Can-Am. Apart from the 24-hour flights each way, it was a tough assignment. The company had something for us to do every second of the day. I’m lucky I got some sleep. How journalists manage to write their stories among all this is a complete mystery to me.

But you don’t care about that. You want to know about the new Spyders.

Right from the beginning, the Spyder Roadster’s unique design set it apart from anything else on the market, and continues to do so. It was designed for the rider who wanted something different and has changed the way we look at travel. The release of these new models for the year ahead will take this to an even higher level. The RS sports models continue in the range, but there is also a touring range from the base model RT through to the flagship, the RTS Roadster Tourer.

Where does this all come from? Can-Am’s background is as diverse as you can get in the powersports world and it certainly has the ability to think outside the square. It has been giving people something totally different for years, both on the water and on the road.

This spirit of innovation led Can-Am to build the Spyder, a three-wheeled cross between a sports car and a motorcycle. The Spyder has already carved out its own niche in the market and is now expected to take touring to a new level with the RT. 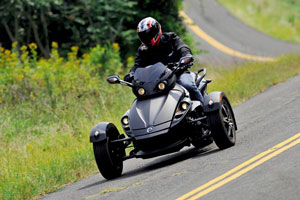 In general terms, this model is similar to the earlier sports version. Can-Am has increased the wheelbase width by three inches, giving more stability and control and making it easier to ride, but has left the length alone. Both from a distance and up close, the RT is stunning in design and finish. It incorporates a full fairing complete with a well-laid-out and easy-to-read dash with analogue instruments, electric windscreen and large mirrors.

Other options include cruise control, electric parking brake, a stereo system that can be operated by rider and/or passenger, heated rider grips and rails for the passenger.

Seating on the RT is plush and comfortable enough to make any touring rider envious. The seat is only 750mm high. The passenger gets a soft wraparound back rest that looks as if it would be comfortable for hours, along with running boards for their feet.

Storage space on the RT is a major feature with a large front boot area of 58L, panniers at 26L each, a top box holding 43L and even a 2L glove box. That’s a total capacity of 155L.

ABS is standard on all models, but the RT has one extra-special feature: should you decided to add the trailer Can-Am has also just released, once the lighting plug is connected the ABS recognises that the trailer is attached and adjusts itself accordingly to suit the extra weight. How smart is that? Very.

The RT is still powered by a Rotax 990cc vee-twin, D.O.H.C, four-valve, EFI engine that delivers 71kW at 7500rpm compared to the sports model’s 79kW. Even though they have the same engine, the RT has increased torque at a lower rpm and now offers 104Nm at 5500rpm. This was done by increasing the compression ratio to 12.2:1. The RT needed more torque to compensate for the extra weight of the vehicle, now 663kg gross vehicle weight.

The electrical system is fly-by-wire, making all the electronics simple and easy. Once on the road, it doesn’t take long before you start feeling right at home on the Spyder and not just on the RT but on all of the new models. Acceleration, braking and handling have been very well sorted by the on-board control systems. Between them, the VSS (Vehicle Stability System), TCS (Traction Control System), SCS (Stability Control System), DPS (Dynamic Power Steering) and ABS make the whole package not just a dream to ride but also a safe one.

Whether on dry or wet roads, the handling is superb, with most of the thinking already done for you. Avoiding things, such as potholes that suddenly come into view on the road, can be done easily by steering around them either on or off the power.
The Spyder will happily cruise on 110km/h all day long and should you need to overtake, the Rotax engine will deliver plenty of power to do so on your command.

The RT comes with a five-speed, SE5 manual or five-speed, semi-automatic gearbox. Shifting up is done manually on both, although shifting down with the semi-auto through the box can be done manually by thumb or automatically by the management system, giving the throttle a blip each time it shifts down to a lower gear.

The technology is great, and very useful, but the most outstanding thing about all the Spyders is that they are such a hoot to ride.
Colours for the RT in the Australian market have not yet been finalised, but black is a certainty as is Quantum Blue. A wide range of accessories will also be available for all the new models, including the trailer.

The trailer has a huge 600L capacity and looks just great. It has two lids for convenience, one front-opening and one at the rear, letting you access your gear from either direction at any time. The trailer is well set up with independent suspension but has no brakes. It uses the same tail lights as the Spyder and looks the part from any angle. At this stage we are not quite certain about the tow bar. On the US models I rode, the tow bar is connected directly to the swinging arm. In Australia, the mount has to be to the frame, but I’m sure BRP Australia, the distributors of the Spyder, will figure out a way to deal with this small problem.

The RT would capture any rider’s imagination. It was built as a true touring machine, incorporating all the bells and whistles a rider and passenger could ever ask for. I’m sure that this model will make its mark on the touring community throughout the world.

Most of the above comments apply to the RS and RSS sports models as well, although these are built for the rider who wants to be a little more adventurous; someone who wants the wind in their face and the exhilaration of a sports machine but with the added safety factor of the three wheels and electronics. These models have slightly lower seats at 737mm and are lighter with a gross vehicle weight of 540kg — that’s 123kg less than the RT. They’re also sportier, with 79kW at 8500rpm and 104.3Nm of torque at 6250rpm, making them lots of fun to ride with heaps of acceleration. When sitting on the RS you tend to have a little more bodyweight over the front end than you do on the RT, which doesn’t change the handling much but gives you a sportier feel.

Touring on the sports models is not a problem, with panniers and racks plus higher windscreens now available. Should you wish to change the RS, there is a phantom black panel kit available, turning your Spyder into something a little more aggressive-looking. There is also a Hindle exhaust pipe available, which sounds terrific.

Prices for the RS and RSS, as well as the trailer, had not been confirmed as we went to press.

Lots more information is available at www.brp.com.au or you can contact your nearest Can-Am dealer.