NSW’s Central West reveals its best roads to a bunch of old blokes on a brace of the latest Triumph road bikes. If they can do it, so can you.

A midsummer ride in NSW’s Central West was always going to be risky weather-wise, but the Sky Gods cut us some slack.

The plan was hatched with the ‘Grey Ghosts’ months ago to ride out via the Putty Road and the Hunter to Mudgee astride a ‘Triumphant Quartet’ comprising a pair of sensational Triples, the new Bonnie Bobber and tenacious Tiger Explorer 1200.

Of course, a ride anywhere should begin with the Putty Road, so after a fortifying ‘Big Breakfast’ at McGraths Hill, the four follicly challenged riders headed north on Sydney’s arguably greatest riding road to Denman in the lower Hunter for lunch.

Unsurprisingly, the two Triples (a Street 765 R and Speed 1050 R) set the pace with Paul in his usual lead position and the rest trying to keep up. The ever-present threat of double demerits meant his throttle hand was carefully restrained as we wound our way through the Garland and Howes Valleys northward. The magnificent river gorges never fail to thrill and with the energetic buzz of the smaller Triple singing its chorus in concert with the throaty baritone of the big Speed, the quartet’s melodious progress was easy to follow.

Instead of the common approach to the Mudgee region via Lithgow, the verdant dales of Bylong and Breakfast Creek made a superb alternate route into Rylstone that revealed excellent roads overhung by the massive Wollemi cliffs in the distance. An alternate (untested) route direct to Mudgee would be via Wollar and Munghorn Gap.

With accommodation pressure on beds in Mudgee township over the holiday period, it was much simpler to find digs in one the several satellite villages that complement the region and add colour and variety to your ride.

We settled into rustic surrounds at the Coomber Guest House at Carwell, on the outskirts of Rylstone. Preferring the basic Shearers’ Quarters over the Homestead, it was a perfect choice for a bunch of travelling blokes and even the +1s got in the swing of it.  In winter, a roaring fire would illuminate the outdoor, undercover seating area

Well away from the traffic and the few street lights, our only disturbances were cackling cockatoos, bleating sheep and an ominous amber moon that threw eerie shadows through the spectral branches of a dead gum tree at the end of the paddock.

Our supporting 4WD came in handy for the trip into Rylstone’s Globe Hotel for dinner. Note: Thursday night is Schnitty night!

Rylstone is blessed with a tight-knit, proactive community that hosts artisan and produce markets every month and a 20-point, self-guided historical walk you can take at your leisure. Or not.

After a hurried tidy-up and necessary ablutions, the entourage set off for Mudgee along the old rail route via the tiny siding at Lue where the old pub and abandoned railway station create a mini ghost town. The Gwabegar railway line was opened in 1882, closed in 1992, reopened in 2000 and then closed again. Apparently, a section for tourist trains will be (re)reopened this year for special heritage trains. Hope so.

It’s impossible to wrap up Mudgee’s numerous attractions in just a couple of paragraphs, so I would implore you to go see this impressive rural township of 10,000 people for yourself. The go-ahead tourism team have lots of helpful information and you can get mid-week accommodation deals via their website.

If you only have time for one winery visit, make sure you swing by Robert Stein’s off the Ulan Road, northeast of the township. Here you can see the family’s collection of 16 historic motorcycles ranging from a 1927 Douglas, through a ‘66 Triumph Thunderbird and ‘76 BMW R60. You can even buy your favourite wine like Norton Shiraz or Triumph Cab Sav. True.

If you decide to stay in Mudgee, it’s always a fun night at Roth’s Wine Bar in central Market Street and if you’re tempted to try one of their ‘10/80’, ‘Lucijet’ or ‘Diesel’ cocktails, make sure you get a cab. You’ll need to.

After carb and coffee loading at the Mudgee Bakery, we set a northerly course to Gulgong which the Grey Ghosts remember only too well from the $10 notes in their first pay packets. Six dollar lunches at the Prince of Wales Hotel are a bargain, but go the fish and chips. Burgers were not so flash.

Be on your best behaviour along the main Castlereagh Highway as we had to pass a most forlorn-looking Harley rider who’d fallen victim to PC Plod’s carefully laid trap. Henry Lawson Drive to the east is the less conspicuous route.

Next, it was time to investigate the 140km Mudgee – Hill End – Sofala – Ilford section which is now fully sealed after the last hotmix was laid between Hill End and Sofala in 2015. And what a ride it is!

The Triples simply ate up the fresh tarmac, making easy work of the tight, well-cambered corners and short straight sections. This old rider with a dodgy coccyx, sat comfortably all day in the Street’s saddle while that same comfort was not enjoyed in the Bobber. Despite a gorgeous torquey 1200cc twin, the bicycle-style seat was not one for me to sit in all day. With its 9.1L fuel tank, lack of cornering clearance and limited rear suspension movement, the Bobber is a cool town bike but not much fun on the bumpy sections at speed for chaps like Dave and I who could shed a few kilos.

The Tiger (Dora the Explorer) is one heck of a bike. Big and burly, it suited taller Stu and his pillion belle, Mam, which the two rode imperiously for two solid days like a champ. The big brutal 1200cc triple delivered torque and acceleration at the drop of a hat and the adjustable windshield, although small, was certainly welcome. While the Tiger 800 was not tested, critics have reported it is a well-balanced, tractable machine for regular (sub-180cm) sized blokes.

At day’s end, we lobbed at the 135-year-old Royal Hotel Capertee on the Castlereagh Highway. The old pub has undergone several renovations since I first visited about ten years ago. The rooms are dinkum pub-style with shared facilities and now has an enlarged dining area away from the front bar. A long-time favourite with touring bike groups, there’s even a shed to lock up your bike at night.

We wrapped up our little adventure with a stop at the Hillbilly Cider shed at Bilpin where you can partake in a chilled, non-alcoholic ‘rider cider’ before pushing on to the finish at Richmond. 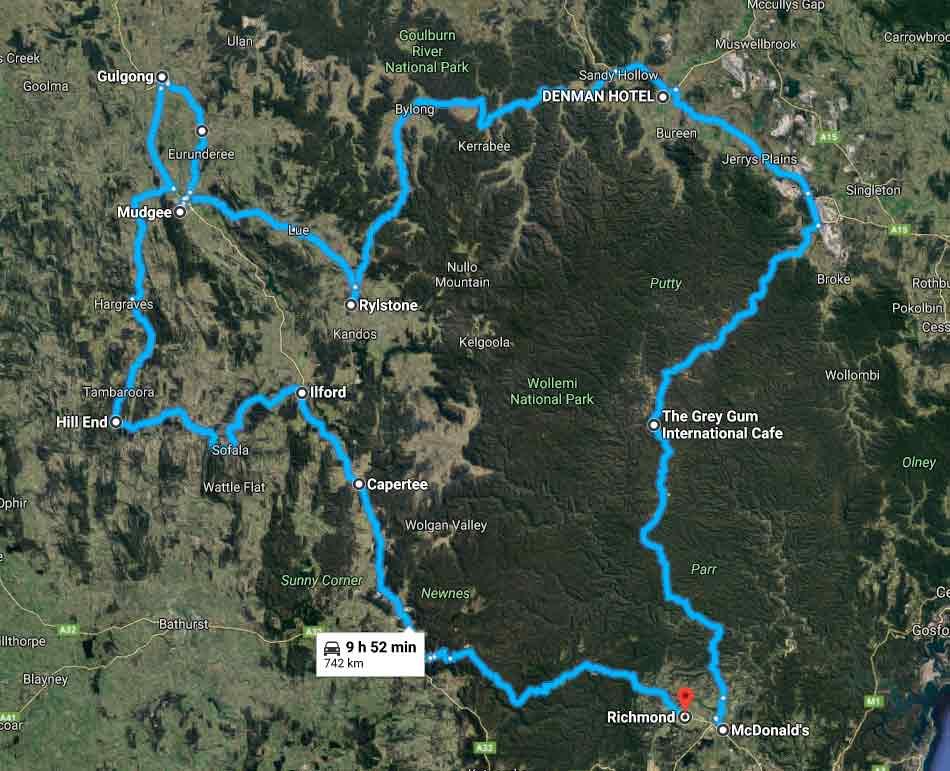 Here’s how to do it on your odo…

Rides We Love: Getting High in New England

Words: Roderick Eime Photos: Roderick Eime, Hema Maps/Matt Williams “So, who’s been in my room?” asked Paul, “all my stuff has been moved around!” As Paul paced the hallway of the Walcha Royal Cafe, […]