Here’s a bit of everything for you

Usually, I get left alone to decide what I’ll write about and when. Every now and then the Bear will nudge me in one direction or other but he’ll still leave me a lot of leeway. That’s not surprising; he pays so badly he can’t really do anything else. One reason I hope I don’t lose my job at the bank is simply because I couldn’t live on my writing income.

So it was a surprise when he rang recently and asked me straight out to do a story on the Yarra Valley.

“Because you wouldn’t have thought of doing it yourself,” he said. “And that’s because you’re too close to it.”

He was right, too. The Yarra Valley is the elephant in the room of motorcycling around Melbourne. But there is a problem.

“I could write a book about the place,” I said. “There’s so much, like all the events, and the wineries…”

“Executive summary,” he said. “Short, sweet and not too many quotes from the websites. You go, girl.”

He knows I can’t hit him over the phone but I can quote from the web.

“The Yarra Valley is a world-class, world renowned wine region, reminiscent of Bordeaux or Burgundy in the South of France, or the Tuscany region of Northern Italy,” says the valley’s pre-eminent website. Borgundiscony, in other words. 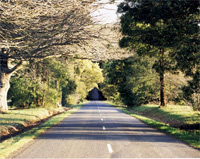 “It is a place of unspoilt pristine beauty, where the water and the air are clean and crisp, the views spectacular and the friendly ambience invites you to just rest for a while, kick back and savour the very best regional or international cuisine on offer… or a glass of world class wine. Whatever your indulgence you’re sure to find it in the Yarra Valley.”

Now let’s be fair here. I’m a proud local, but even I know that you’re not likely to read in a handout about Tuscany that it’s the Italian equivalent of the Yarra Valley (it’s always interesting to reverse these comparisons) but there is some truth in that blurb. The wineries, especially, are truly good value and a lot of them now have excellent food. But I’ve ridden (a scooter) around Tuscany and I have to say that the Yarra Valley lacks one of the greatest attractions of that amazing place: the enormous tight network of dirt roads that connect everywhere with everywhere else. These are wonderful, even on a scooter (they’d be brilliant on a small dual-purpose bike, I think) and unfortunately the Yarra Valley is too small to ever develop an interesting version of that kind of network, on dirt or tar.

To make up for it a bit, the valley does have quite a few roads feeding into it (or leading out of it, depending on your preference) and almost all of them are tarred and in pretty good condition. It remains to be seen if the State government will get around to maintaining them. The Black and Reefton Spurs, the Toolangi road down to Healesville, the dead-end road up Mt Donna Buang and the road from Cockatoo to Woori Yallock are only some of them.
But I suppose for the edification of our interstate readers I’d better outline what and where the Yarra Valley actually is. Oh, look, here’s a description on this website right here.

“If you’re looking for a region within easy driving distance of Melbourne that offers a sensational array of sophisticated pleasures and dazzling scenery then look no further than the Yarra Valley.

“The Yarra Valley extends over quite a large area. Naturally, it roughly follows the winding route of the Yarra River. It is very easy to find your way around and there are many interesting routes that you could take. Whilst it may seem daunting, in reality places of interest are not far from one another and you could easily travel everywhere in one day if you wanted to.”

Very true indeed. The valley is a mere 50 kilometres to the east of Melbourne’s CBD, a comfortable hour’s ride. It’s quickest to take the Eastern Freeway from the city and then join the Maroondah Highway. That takes you right into the middle of the valley; if you want to check out the southern reaches, all the way out to the Upper Yarra Reservoir, turn off the Maroondah onto the Warburton Highway. 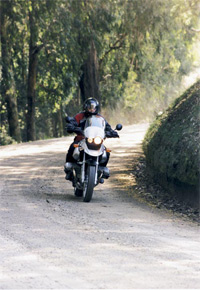 Now in Europe there would be roads following the river, for scenic purposes, but here you don’t get any of that until you’re past Millgrove on your way up to Warburton. See more on this below. Pity, but instead you do get some good roads through the hills like the C506 from Healesville to Launching Place.
I guess the trick in the valley is to take that turnoff. No matter where it is, just get off the main roads and take “the road less travelled”; it will quite likely be a good run and the beginning of some other good runs. Nominating really special bike roads is easy, of course. Some of Australia’s best-known motorcycle roads lead into or out of the valley, as I mentioned above, so just go for it – you will not go wrong.

Now, the problem is that the place has become seriously expensive. I mean, you wouldn’t expect to go to Bordeaux, Burgundy or Tuscany and expect to survive on the contents of your coin purse, would you?

For the Love of My Life (well, okay, my husband) and me this has become a bit of a challenge to which we both have risen. We have a backpack with picnic stuff in it, including a couple of plastic champagne flutes and cool storage for a couple of bottles. We fill that with a bottle of bubbly and one of mineral water and add it to all the stuff that we normally reckon we can’t justify buying – including some really good Scottish smoked salmon – from our local deli. You see, even this is cheaper than eating out – so we’re saving money! Hubby wears the picnic backpack, I carry a courier bag with the rest of the food and we find ourselves a place to eat.

Last time it was a wooden table by the Yarra just short of Warburton and I don’t think the gods on Olympus ate better than us. Nor do they eat to the sound of The Ride of the Valkyries. There’s something to be said for BMW’s onboard sound system. Although waving a chicken leg around while pretending to be a helicopter gunship coming in on a Vietnamese beach is probably a bit over the top. Sorry I did that. Especially if that family in the Kia Carnival that nearly stopped was Vietnamese, as they looked to be.

So, err, do you reckon that covers it, executive-summary-wise? There’s a lot more to tell, but it’s just information; you can get that from websites or brochures. I hope what I’ve supplied here is inspiration! But go easy on the sound system.
LMc