Yamaha has rolled a moody hoodlum quietly into the marketplace. Snag takes it to the track to see if the middleweight sporty can still thrill…

For those of us seasoned enough to romantically remember the downright dirty rush that fast two-stroke motorcycles brought about, well, don’t give it all away just yet. Yes, in this era of rules, order and policed behaviour, Yammie has delivered us a top-end screamer that doesn’t give you a whole lot – until you demand it. Then, the delivery of mind-altering euphoria hits like your first deep kiss. Yeah, you remember that feeling. Don’t ya?

The reason for all this fuss is the way the bike makes its power. Peak horsies come out to play at ???rpm, and that’s where the bike wants to be. In fact, up the3r in revs is where you are gonna want to be to make the best of the power on tap (and to suck in that mad induction roar). For my money, that’s what a sports bike should do. It needs to come on all rushy and loud. Begone all that linear, quiet build of power that besets many sporties in this day and age. This one reminds me of Castrol R, Wayne Rainey and that neck-snapping adrenalin fix of days of yore. And, for that reason alone, I took very kindly to the new R6. It’s a proper madman. And I love them like that. If you’re fair dinkum, so should you. 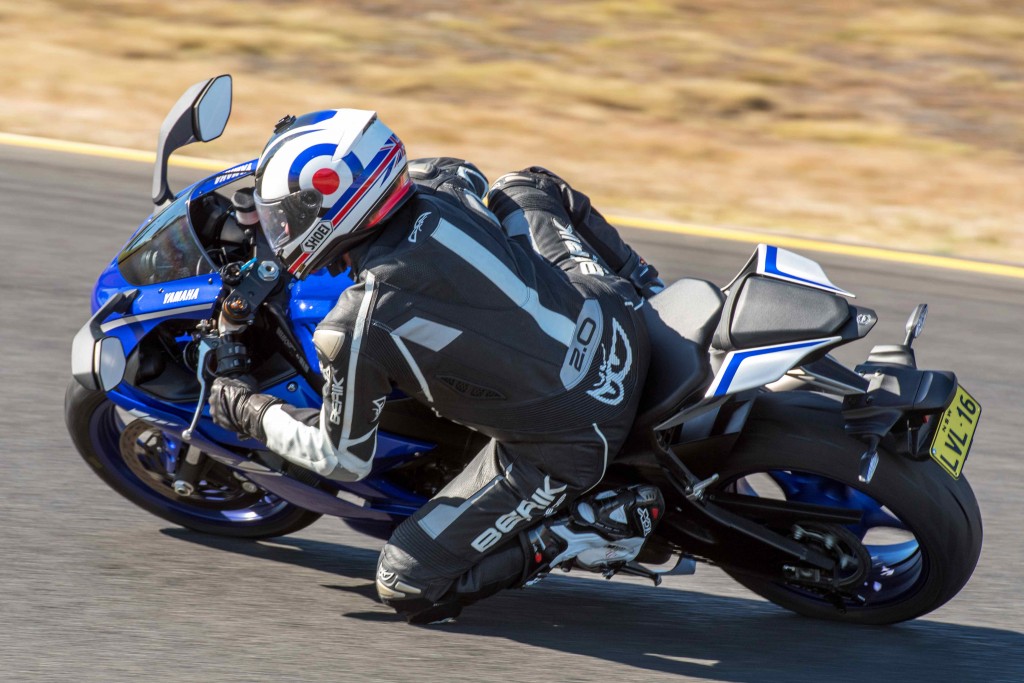 Okay, let’s dial back the hyperbole a notch, lest I bust a foofer valve. All that is nice and romantic. But just what the hell is this thing? So glad you asked.

First up is the look of the bike. All important, especially in this sector, Yamaha reckons it has enhanced the aerodynamic package o by creating a low drag front fairing, giving a significant improvement of 8 per cent in aerodynamic efficiency. A neat touch sees the the bike’s new LED blinkers incorporated into the mirrors to reduce turbulence and drag.

The big news for the incoming model is to be found in an advanced Traction Control System (TCS) – adjusted by a switch on the handlebars, there’s six levels of selectable intervention, as well as an OFF function. Yamaha goes to pains to point out that its system “designed to ensure that there is no unnatural feeling when it intervenes”, and the system also compensates for rear tyre wear to give consistent performance. Dunno about the tyre wear element, I guess time will tell, but the traction control setup is near-faultless. After banging away at Eastern Creek for the best part of a day, I can confidently say that I have never been around there faster on anything. Period. 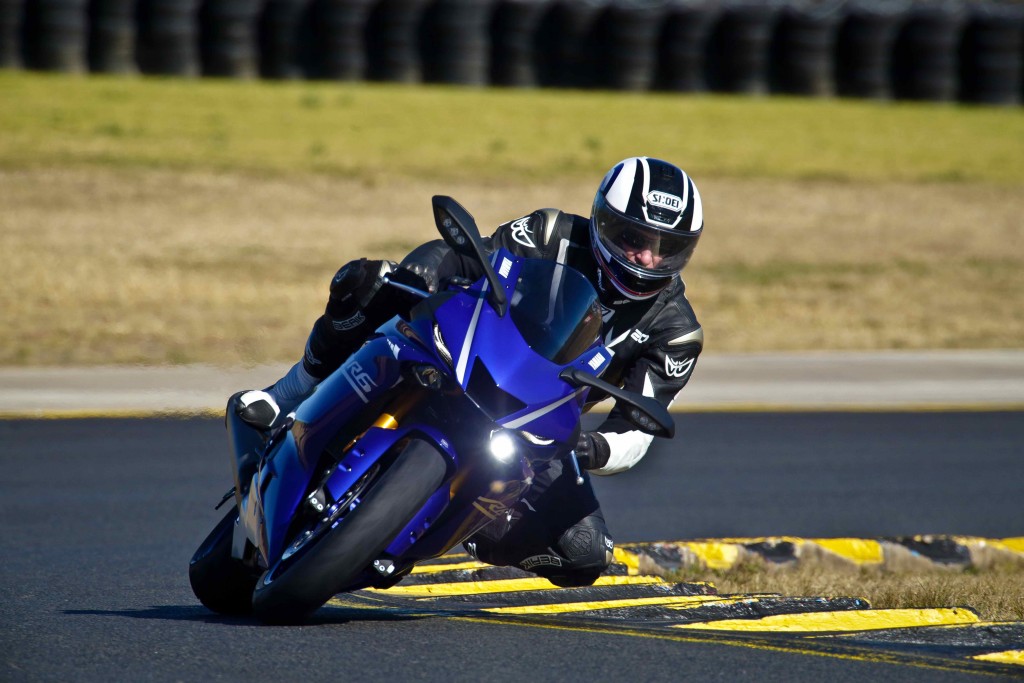 The bike also boasts a new Quick Shift System (QSS) that provides the obvious benefit of faster gear changing. The setup is similar to the one used on the YZF-R1, and instantly cancels drive when an upshift is detected – enabling full throttle clutchless upshifts through the close ratio, six-speed transmission. Yeeehaaa.

The new bike gets big, fat, 43mm KYB upside down forks direct from the YZF-R1, offering more frontal stiffness. Of course there’s a full range of adjustability while at the stern there’s a new adjustable KYB rear shock. So, the bike can be nicely dialled in, as a sports offfering of this ilk shoud.

Completing the ‘sports-brief’, Yamaha was determined to make the new bike easier on which to climb about. The R6 is fitted with a newly designed seat and rear subframe that allows the rider to shift their body weight quickly and easily. Made of magnesium, the subframe is 20mm narrower at the front, allowing the rider – that’s you by the way – to tuck in to the tank and to get your melon outta the wind.

And, the redesign works. I’m no Andre the Giant at 178cm and 82kg, and bigger buggers might find the whole shebang a little cramped, but the ergos fit me like a glove. I reckon 200km stints on the road will see you looking for a coffee and a stretch though – this thing is no sports tourer. But, it doesn’t tell any fibs there. This is all about getting around quickly. Oh yes indeedy. Quickly.

Another significant change for 2017 is the fuel tank. Manufactured from aluminium, the tank features deep knee recesses to let you grip the bike, and the subsequent improved riding position adds to that freedom of cockpit movement.

Now, all this sporting performance has to be earnt. As I mentioned, you gotta demand it. You have to ride this bike hard to get anything like the best from it. Pussy about and it’ll feel like just about any other middleweight sports offering. A little light in the midrange, a little cramped. But, get aboard, set the thing up, twist the wrist like you mean it, pick your line, fling it smack-bang on its guts and it all starts to make a whole bunch of sense. You’ll be part of the bike, simly because it makes you ride with more competence. Because of that hit of brilliance, that super sharp precision. That’s called ‘engagement’. And who the hell doesn’t want that from a sports bike?

Don’t tell me we have a real sports motorcycle here?

Triumph has thrown its globally strongest bike into the weeds and started again. Has it been too brave, or is this the best Street Triple ever? They say there is no replacement for displacement. Indeed, […]

More and more, do I find myself attracted to plainer bike gear. In fact, I’ve been known to spray paint my favourite lids flat black to hide the busy graphics. I don’t want flames drawn […]