The V7 range is the precocious youth of the Moto Guzzi fleet, with the minimalist Stone incarnation offering a new pared-back and matte black persona along with engine and styling mods in this third generation. Beyond Stone, the V7III exists in Special, Racer and a limited run ‘Anniversario’.

The groundbreaking V7 first hit the streets of Italy in 1967 and set a new course for the stalwart marque that was formed by two former WWI fighter pilots way back in 1921 as “Società Anonima Moto Guzzi”. It was the first time the motorcycling world had seen the longitudinally-mounted 90° V-twin engine that would become the very symbol of Moto Guzzi itself.

Now, half a century later and under the giant Piaggio Group (which includes Aprilia and Vespa among others), V7 has hit new heights with tech and performance upgrades.

Outwardly, Stone’s economical and purist design maintains its familiar bare-bones look, appealing to younger riders of both sexes. Yet beneath what little there is on show, lies a wealth of technology for the tech-savvy rider to wallow in. 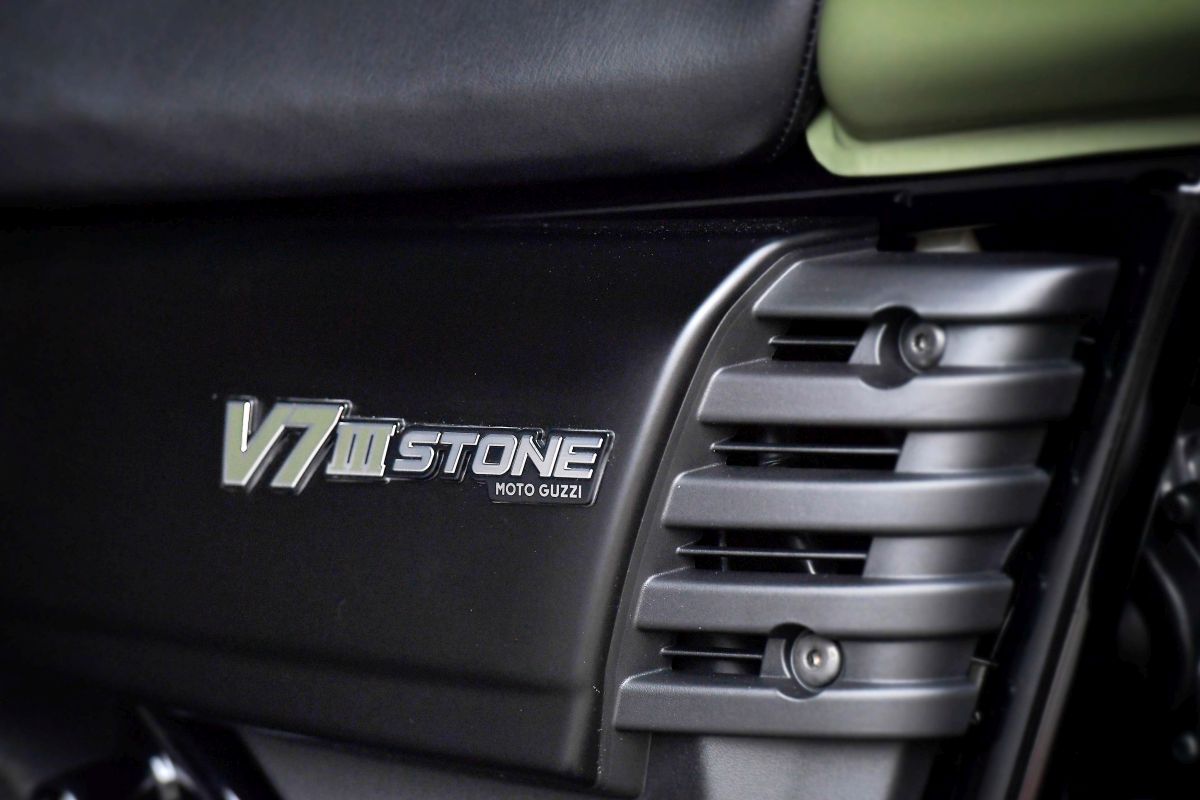 In a nod to the demographic that relies on a smartphone for their very existence, the V7 has an app for that. The Guzzi Multimedia Platform (GMP) creates a wireless connection between your vehicle and your handheld device, “transforming it into a sophisticated multifunction onboard computer, always on the Net.”

If this connectivity and computational ability appeals, you can have your iPhone or Android display speedometer, rpm indicator, engine power and torque, instant and average fuel consumption, average speed, battery voltage, longitudinal acceleration and extended trip computer. Given that the Stone only has a single dial and no tachometer, this could come in handy.

You can enthrall yourself with the “ECO RIDE” function, which helps you achieve optimal fuel consumption by adopting an eco-compatible riding behaviour. Constant monitoring permits an evaluation of your results and these are displayed during the trip. Or you could just ride.

A more mundane enhancement is the welcome injection of horsepower. Not a greedy lashing, but a useful 10 per cent thanks to a suite of new engine components, most notably new cylinder heads using the ‘hemi-head’ design of the type used in the larger V9 (850cc). The redesigned powerplant also features a new ventilation system, pistons, cylinders, oil sump, crankshaft and exhaust tuned for “easier revving and stronger engine braking”. Even so, the emblematic V-twin still retains lightweight pushrods and rockers with two-valve induction and the signature exhaust note that unambiguously signals your arrival – or departure!

If you get a bit carried away, Brembo calipers and discs provide more than adequate braking to the standard fitment Pirelli Sport Demon tyres on gorgeous spoked wheels. Stone is the only V7 to offer these solid cast rims.

In deference to riders of regular stature and perhaps women, the seat height has been lowered 20mm to 770mm. This and a reassuringly neutral balance delivers a comfortable ride that is both welcoming and forgiving, if somewhat uninspiring to seasoned speedsters. ABS and adjustable traction control as standard further raise confidence for less experienced riders. The whopping 21 litre fuel tank pretty much ensures you won’t get stuck in traffic for long.

Given that most V7s will see out there days battling urban traffic snarls and holidaying on beachside boulevards while their owners sip lattes, the styling and colour options follow suit. You might feel like you’re shopping for nail polish with shades like Nero Ruvido (matte black), Azzurro Elettrico (blue), Verde Camouflage (green) and Giallo Energico (yellow).

All jibes aside, this newest Moto Guzzi V7 III Stone pays respectful homage to its half-century heritage while delivering the retro-loving rider a satisfying and relaxing experience in inimitable Italian style.

Bet you didn’t know this about Moto Guzzi

Moto Guzzi has just launched the latest versions of the California 1400 in Australia, and what an impressive sight they are. There are two very distinctive models available, the Eldorado and the Audace. At first […]

Moto Guzzi’s traditional longitudinal V-twin engine has been re-born with liquid cooling and named the V100 Mandello. Two bikes have been shown off as Australian Road Rider went to press, so scan the QR code […]