There was a 20-knot cross wind, my elbows were mashed against my knees and therefore sticking out into the breeze, and I couldn’t get my head down behind the screen properly. Despite this, the speedo needle was pointing to 310km/h on the Suzuki Hayabusa.

It was 1999, I was at the Australian launch of the then-new Suzuki Hayabusa GSX1300R, and going that fast is something I hadn’t done before and haven’t done since (well, maybe for a nanosecond at the end of the main straight at Phillip Island). 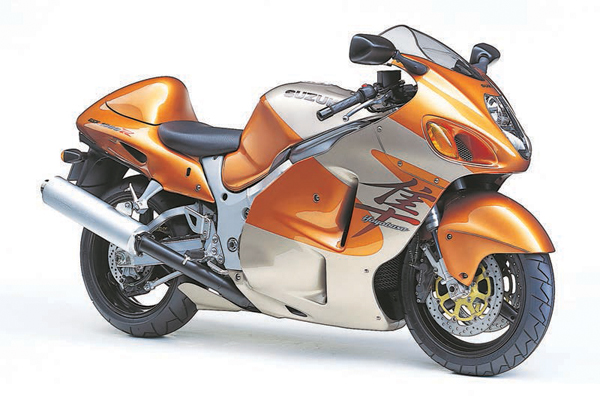 We had 3km of Avalon Airport runway that day, but the conditions weren’t ideal, that’s for sure; the crosswind meant leaning into the breeze just to go in a straight line. A combination of my physique sticking out into the wind and a lack of bravery to try harder meant my actual top speed — as measured on a radar gun hired for the day — was 282km/h. Other riders went faster, but I’m only a little bit bitter; 282 is, well, fast enough. From memory, the jockey-sized Mark (Bracksy) Bracks did almost 300km/h.

The 1999/2000 Suzuki Hayabusa has now gone down in history as the fastest production bike ever, because by 2001 everything was limited to 299. The top speed wars were over and Suzuki had won. Twenty years later, you can still buy a new Suzuki Hayabusa, although maybe not for much longer; sales have been stopped in Europe due to the current model not meeting Euro4 compliance rules, but the bike is still available here and in the USA, although a replacement model — which we expect will still be called a Hayabusa — is rumoured to be in the works as a 2021 model to be announced late next year.

Before Suzuki stole the name, a Hayabusa was a Japanese bird of prey that hunts blackbirds and can reach speeds approaching 300km/h (in a dive). At the time of the Hayabusa’s launch, the world’s fastest motorcycle was the Honda CBR1100XX Super Blackbird, a bike Suzuki was desperate to beat… and it did. 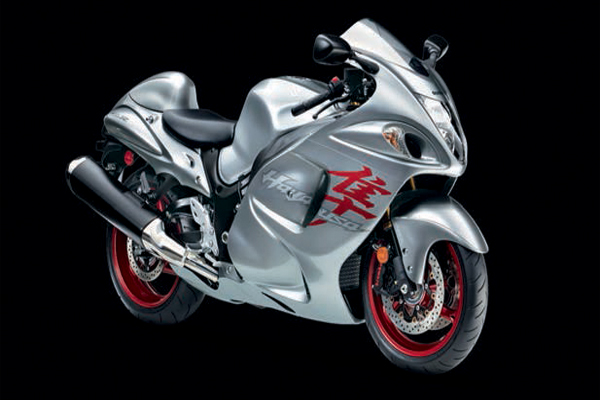 As speeds rise, motorcycles need more and more horsepower to achieve ever smaller gains in top speed — that’s physics. Suzuki started with the standard formula — heaps of power from the 1299cc motor — but went to town on the aerodynamics, releasing the bike with the most bulbous fairing and even more bulbous rear-seat cowl we’ve ever seen on a standard motorcycle, while fitting the air intake ducts in the bike’s nose, creating a ram-air effect.

Drawing equal levels of desire and derision, the Hayabusa’s style was polarising, to say the least — but it worked, so for those seeking the fastest motorcycle out there, it was beautiful, and it sold very, very well.

Within a few years the Blackbird was gone, Kawasaki’s new ZX-14R was living in the Hayabusa’s shadow, BMW had a shot with the K1300S but missed the performance mark, and motorcycling settled down to the understanding that the top speed wars were over.

Although all the headlines pointed to the incredible top speed, the Suzuki Hayabusa is a very capable sports-touring motorcycle. The riding position is remarkably comfortable, passenger accommodation not as crazy as it sounds, and you could even fit various aftermarket luggage set-ups for longer-haul rides. 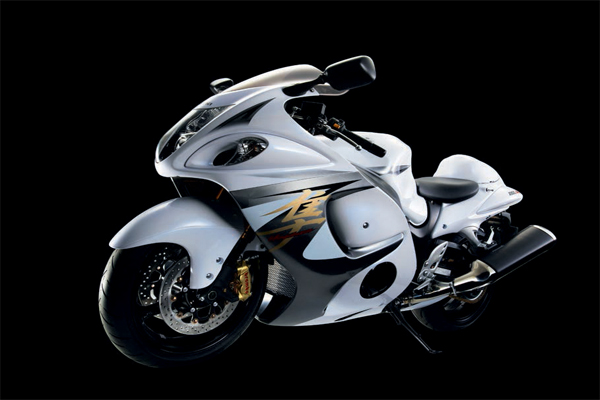 Apart from colours, a few tweaks and the speed limiter, the Suzuki Hayabusa was essentially unchanged from 1999-2007. For the 2008 model, Suzuki upped the capacity and added titanium valves to produce more power, fitted a slipper clutch and a new steering damper, added three riding modes to the electronics, shoved in revised suspension and a stiffer swingarm, added radial brakes with new callipers… all to make the bike go, stop and handle better, while being a bit more civilised. The designers also went to town on the bodywork, making  it even more radical. In 2013, Suzuki switched to Brembo brakes and added ABS.

The worst thing about the Hayabusa is its appetite for rear tyres. Luckily, tyre technology has improved in the last 20 years and prices have been very stable, so it doesn’t cost as much to keep one shod as it used to. That said, putting 175-odd horsepower through any rubber is going to cause stress, but tyre life will be very much driven by how you ride a Suzuki Hayabusa. Give it the berries and you’ll pay in rubber, chains, sprockets and speeding tickets.

With that much horsepower in a bike never designed for the racetrack, general riding is very low-stress for the Hayabusa. Some early models suffered from cracking in the steel sub-frame, especially those forced into service as touring bikes with luggage. Some cam chain tensioners in the early models failed and there was a recall for faulty fuel pumps on the 1999 models.

Later models — from the minor revisions early this century to the later updated versions — are all bulletproof if left standard. Nothing attracts a backyard tuner like a Hayabusa though, so be very careful if you’re looking at a bike with a modified motor.

The weaker points in the early models were the brakes and suspension, details addressed in updates to later models.

Twenty years ago a new Hayabusa was $17,490 plus on-road costs. As I write this, a 2019 model will cost $18,990 ride away, which is pretty close… except your 2019 dollars are worth a whole lot less than your 1999 dollars. What that also means is you can buy a secondhand model which is a good bike at a very affordable price — we’re talking five grand here folks, for one of the most powerful, fastest motorcycles ever made.

The iconic 1999 model is already starting to appreciate in value, with a few lunatics out there asking silly money for a good one. If you’re a collector you’re probably interested in such things, but you’re probably also only reading this article to spot any errors I might make…

I can’t really recommend a 20-year-old bike for general riding, but you can easily find 10-year-old Hayabusas from $6000, although they would have quite a few kilometres on the odometer and might have some accident damage or other sins of ageing.

If you can put together 10 grand you’ll get a good one, with under 50,000km on the clock. If it’s been parked in a garage it’ll probably be fine, ready for many more years of service. If you can afford a little more, the 2013 model, with Brembo brakes and ABS, is a great bike. Expect to pay around $12,000 for a 2013 and around $1000 more for each year a bike is younger than that (but, like everything, condition and mileage are critical).

I went looking for a Hayabusa some years back, but found a good Blackbird first and bought that. I don’t regret the decision — the Blackbird was a great bike — but in some ways I wish I’d bought a Hayabusa. Like the Katana before it, the Hayabusa defines a category, even if it wasn’t the first.

Suzuki is offering discounts of up to $1800 on Hayabusa, GSX-R and Boulevard motorbikes until the end of May. All the Boulevard cruisers, from the learner-legal S40 single through to the mean M109R V-twin have had […]

Suzuki has announced its Mega March sale in which you can choose between interest-free finance or a discounted ride-away price on its motorcycles. The month-long sale covers a range of road, dirt and ATV machines. […]

Suzuki Hayabusa, through the years

There was a 20-knot cross wind, my elbows were mashed against my knees and therefore sticking out into the breeze, and I couldn’t get my head down behind the screen properly. Despite this, the speedo [...]