They are round, black and stop your rims being scratched by the asphalt, right? And it’s a known fact that motorcycle tyre manufacturers are ripping off bike riders because car tyres easily last three, four or 10 times longer than bike tyres, yet bike tyres cost more. And bike shops rip us off because they won’t patch a tyre with a damaged sidewall, making us buy a new tyre instead.

All of the above are urban myths, probably generated by cranky people who don’t really understand what a motorcycle tyre does, how it does it and why you can’t safely repair the sidewall of a tyre.

A motorcycle tyre is designed to be leaned over, up to 66 degrees if your name is Marc Marquez and you’re on your way to winning another MotoGP. While Marquez is a freak of nature — relatively few riders can scrape their knees, let-alone their elbows — the lean angles achieved by riders at their first racetrack ride day can be incredible compared to a few decades ago, with most of the credit going to the tyres.

Of course, MotoGP is about as extreme as it gets for a motorcycle tyre; I don’t think anyone wants to use 14 tyres in a weekend (the current MotoGP allocation under the rules). Even so, relatively cheap, long-lasting motorcycle tyres should be considered performance rubber, because if they lose traction when leaned over, well, repairs cost a lot more than good tyres.

And for the cynics who believe it’s the manufacturers ripping us off, I say have a look at the price of low-profile sticky rubber for sports cars — mileage and performance is suddenly a lot closer to a motorcycle tyre than you may have thought. Given the relatively small contact patch of a motorcycle tyre and the fact that we only have two of them, it’s worth having good-quality rubber between you and the bitumen.

It’s all about traction, which is the mechanical adhesion between the motorcycle tyre and the road surface. Roads, as you know, have a coarse surface which the tyre locks into to provide traction. So your tyre is a bit like a sponge, deforming on contact with the road and locking into its irregular surface, working best when it is up to temperature, when it’s fresh and when it’s at the right pressure.

WHAT’S IN A MOTORCYCLE TYRE?

There are three basic motorcycle tyre construction types — crossply, radial and bias belted — and each manufacturer has various techniques to create something unique, for marketing reasons at the very least: hybrid belts, 0-degree belts, reactive footprints, dual compounds and a whole lot more. While all of these are important, they are secondary to getting tyres that are suitable for your bike and the way you ride.

Generally though, you’ll only find one or two tyres recommended for your bike by each manufacturer, and which one to choose comes down to usage — mileage v. sports performance, the latest generation v. an older design.

HOW TO CHOOSE TYRES

The first thing is to know what sizes you need, and unless your bike still has the rubber on it from when it was new, I’d look up the sizes in your owner’s manual. Unless you really know what you’re doing and why you’re doing it, don’t fit different-sized tyres; changing tyre sizes will make the bike handle differently (at best) or possibly even unsafe.

Many years ago I went with a slightly wider tyre on the back of a sportsbike on the recommendation of the tyre fitter — terrible mistake. The bike would no longer tip into turns sweetly like it did before.

Many riders will have myriad options available, from super-sticky sports tyres to sports-touring and touring, all available from a bunch of manufacturers. Now it’s time to consider how, where and what you ride. If your bike has panniers, you don’t need super-sticky track rubber. If your footpegs are worn out from scraping, maybe you do.

If you ride on dirt roads, there is now a range of tyres that might be better than what you’ve used in the past. Manufacturers are now quoting recommendations for road/dirt usage, like 90/10 or 70/30. 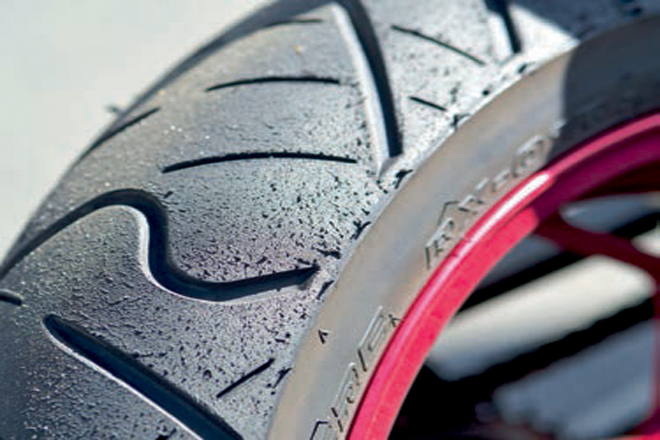 If you would like help choosing the right tyre get in touch with White Racing Products they are more than happy to help!

We’d all like tyres that would stick like shit to a blanket, last forever and cost peanuts, but that’s not the world we live in. Generally speaking, touring tyres last longer than cruiser tyres, sports touring than sports tyres, which can be cactus after a day at the racetrack.

Finding the balance between longevity, handling and traction is the goal and to help you, manufacturers use multiple compounds, different constructions, designs and tread patterns, all in the hope you’ll not only buy their tyres, but replace them with the same brand after you’ve worn them out.

But for all their efforts, how long a tyre lasts is so much in the hands of the rider it’s not funny. First, and most importantly, keep your tyres at the right pressure. Start with the recommended pressure from your owner’s manual (and check it only when the tyre is cold), adjust it to suit your load (passenger etc) and only play with it if you’re not happy with the way the bike is handling.

Second, be gentle with the throttle and brakes. I’ve heard many stories of riders getting double the mileage of their mates despite being on the same make and model of machine and riding the same roads. Riding faster and harder is very hard on rubber.

Conversely, I’ve seen old tyres with cracking sidewalls on cruisers that are ridden very gently by their owners, and those tyres are unlikely to ever really wear out — but they won’t work properly in the rain or an emergency stop either, because that flexibility on the compound which grips the bitumen is gone, destroyed by years of being heated up and cooled down repeatedly, and by age itself.

I wouldn’t fit a tyre more than five years old and wouldn’t be keen to ride anything with a 10-year-old tyre on it.

Ninety per cent of tyre problems occur in the last 10 per cent of tyre life. OK, that may be an urban myth, but from my experience it’s pretty close, both from personal experience and having worked in a bike shop where I got to fit and repair lots and lots of tyres.

The fact is, you almost never see a road bike flat in the first 50 per cent of tyre life, and there’s a huge percentage which occur when a rear tyre is almost down to the wear indicators — the bumps in the main grooves. If the tyre is worn down enough to hit the bumps, you’re overdue to replace the rubber.

Punctures aren’t the disaster they once were. Tyres don’t “blow out” like they used to, although I’m not a fan of tube-type tyres on road bikes because they usually go down really quickly if they pick up a nail or screw. Tubeless tyres will usually embed whatever causes the puncture, resulting in a slow leak. If that happens, ride slowly to a bike shop and hopefully they can patch the puncture from the inside, which is a much more permanent repair than using a repair kit on the side of the road which, by its nature, must be an external repair (and generally should be repaired by a professional ASAP).

Don’t attempt to repair any damage outside of the tread area — you’re risking a blowout and instant deflation, which might just kill you. 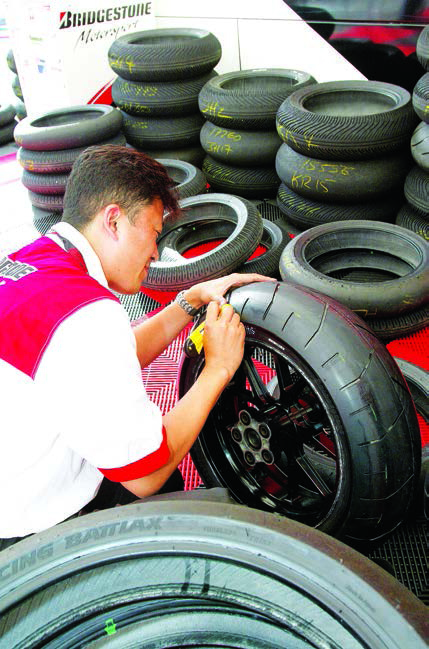 HOW MUCH SHOULD YOU SPEND?

If you’ve got a $10 head, wear a $10 helmet. That was an advertising slogan for Bell Helmets, and it helped sell a lot of helmets. It’s a bit the same with tyres; one accident is likely to cost you a lot more than a pair of tyres, but forever shelling out for new rubber becomes tiresome pretty quickly.

When I worked in a bike shop 25 years ago it wasn’t unusual for sportsbike riders to spend $500 on a pair of tyres that would last 3000km. These days the price hasn’t changed much, but you’ll probably get more miles out of the rubber with a higher-performance bike, so the tyres have improved and the prices, in real terms, have come down.

Here at ARR we believe the smart thing is to buy the tyre you need. The vast majority of us don’t need the stickiest rubber available, especially if you’re not riding a Supersport bike. Have a good think about the riding you do, check out the websites of the major tyre manufacturers and look after the tyres you buy — and they will look after you.

TALK TO ME SENA SRL Bluetooth Communications System Designed jointly by Sena and Shoei, the SRL is a communication system tailored specifically to the Shoei Neotec Ⅱ helmet. The SRL is claimed to be virtually […]

Some bikes are built for the open road. This one was built for the city. This beautiful bike, a customised Royal Enfield Classic 350, ‘Dark Genesis’ is a rolling billboard for its builder, Carlo Hallacq. […]

Want something unusual, perfect for city riding which is fun and different? Maybe the Husqvana Svartpilen 701, which is now available in Australia. Here’s the press release from Husqvarna:   Husqvarna Motorcycles Australia’s Real Street […]