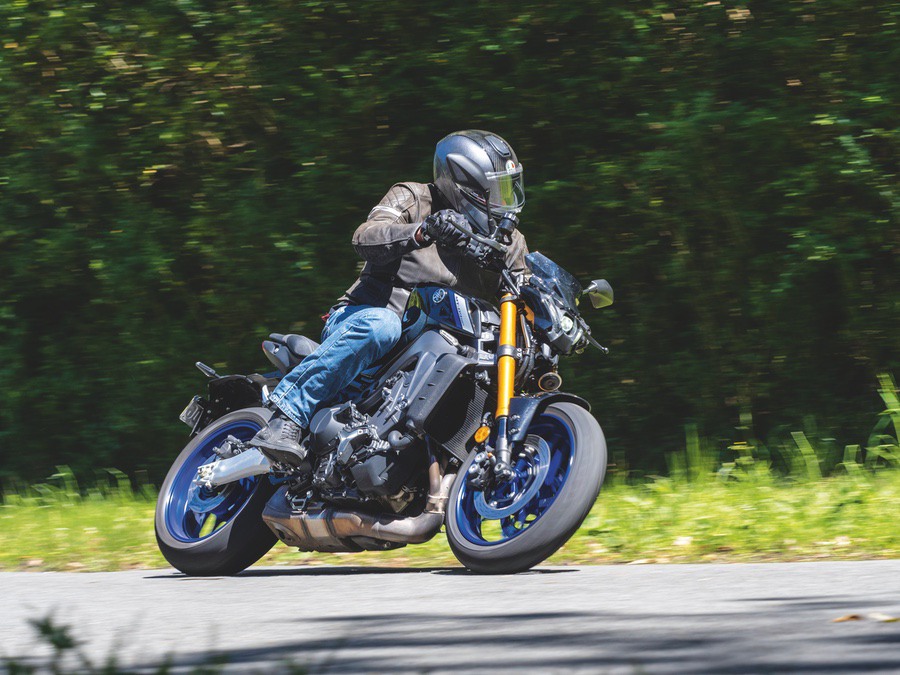 The sweet spot is where everything doesn’t just work, it comes together in a way that feels right. In motorcycles, that’s the Yamaha MT-09SP.

Can you buy cheaper or lighter or faster? Sure. Can you get all of that in one package? That’s what I mean when I say sweet spot; this is a motorcycle which goes hard, isn’t heavy, looks good and doesn’t cost too much. What other bike gives you 119 horsepower, 93Nm of torque in a naked package weighing in at just 190kg, has trick suspension and costs just $17,299?

Yeah, I couldn’t think of much, either. 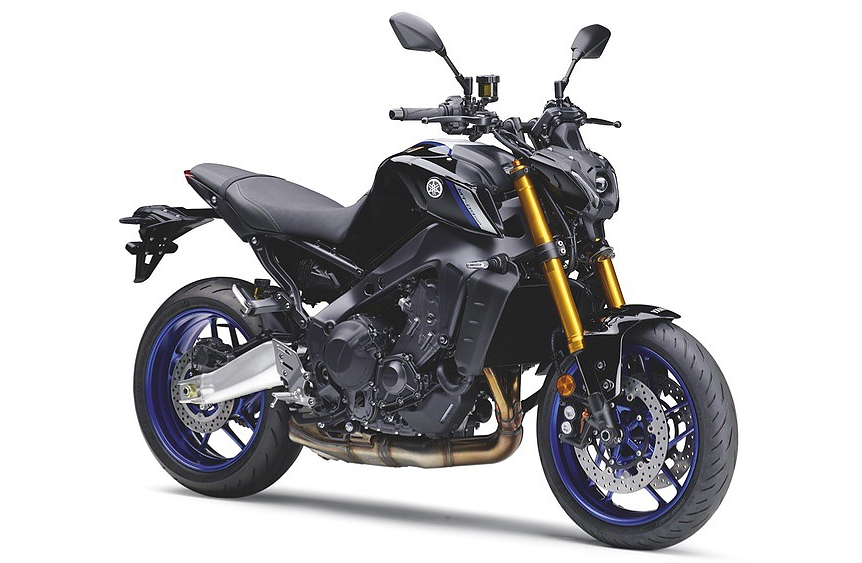 Yamaha isn’t resting on the laurels of the MT range’s success. Despite excellent sales since the introduction of the MT bikes, regular updates across the range of models have made them some of the most successful nakeds this century. Over 250,000 MT models have been sold.

Aimed squarely at people who might otherwise consider a European sporty machine, the MT-09SP needs to offer style, technology, great handling and, of course, decent performance. So Yamaha added a few more horses and six per cent more torque by increasing the capacity by 42cc to 889, installing a YCC-T ride-by-wire throttle and making it more efficient too (for Euro5 compliance, if nothing else). The result is seamless power delivery from the CP3 inline triple across the rev range and excellent grunt, in particular from around 5500rpm.

The Euro5 engine is all new, featuring forged pistons, fracture split conrods, offset cylinders, shorter 1st and 2nd gears and more. The engine is lighter, by 1.7kg, and sounds great too if you like a triple-cylinder howl. Yamaha claims to have tuned the exhaust headers, which has also helped shed 1.4kg.

The intake howl at high revs is very cool. Crouching over the tank at high revs and high speed, the SP feels very much alive, allowing the rider to get into a zone for high-performance fun. Sure, it’s not as sporting as an R1 or as brutal as an MT-10, but it’s sweeter than the sportsbike and much less of a handful than its bigger, four-cylinder brother.

The styling is M1 — as in YZF-M1, the homologation special Superbike. Black only with flashes of colour to give it a dark, stealthy, powerful style. Yamaha describes it as “Spilt Paint design with seamless water transfer graphic”. The swingarm is brushed and clear-coated.

Other differences between the SP and the stocker include a dual material seat with high-grip surface and various blacked-out components like the levers, handlebar and rear sprocket.

The SP will set you back $17,299, $2050 more than the standard bike, and you don’t get a choice of colours, either: the stocker is available in Storm Fluro (Grey), Icon Blue and Tech Black. 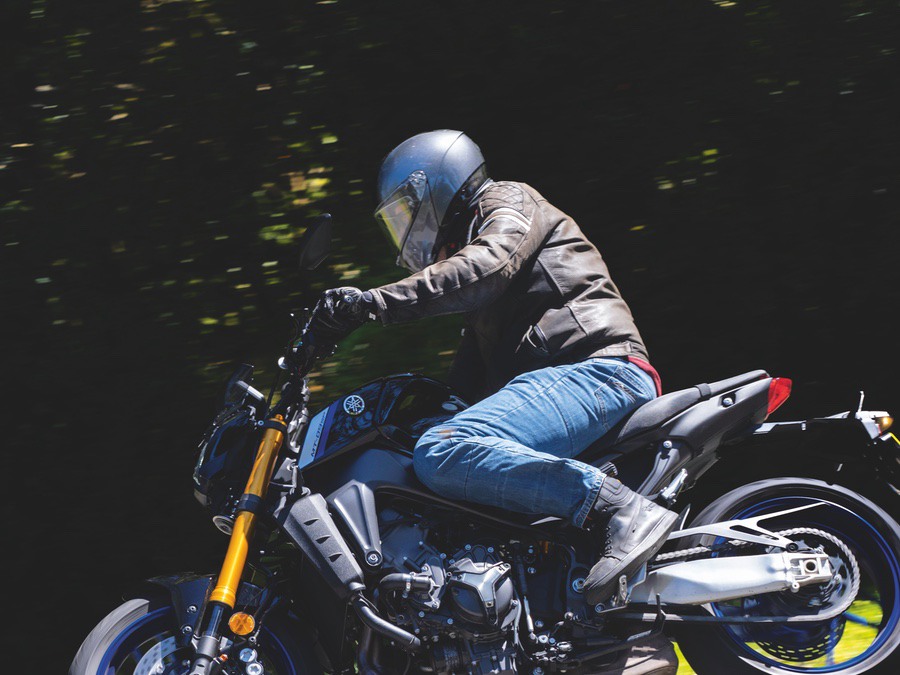 An 825mm seat height isn’t exactly low, so Yamaha’s gone to some effort to keep the seat narrow at the front to make it easier to reach the ground for those short of leg.

Once rolling, the footpeg-seat handlebar relationship is very good for street riding. The ’bars are a little higher than the old model and are slightly adjustable. The lean into the wind means there’s little or no weight on your wrists and the (again, slightly adjustable) footpegs offer a good balance between comfort and cornering clearance. The seat itself isn’t luxurious, but it’s fine for at least the first few hours of any day.

The pillion accommodation has been improved thanks to a wider back seat, but it’s still there for shorter rides. 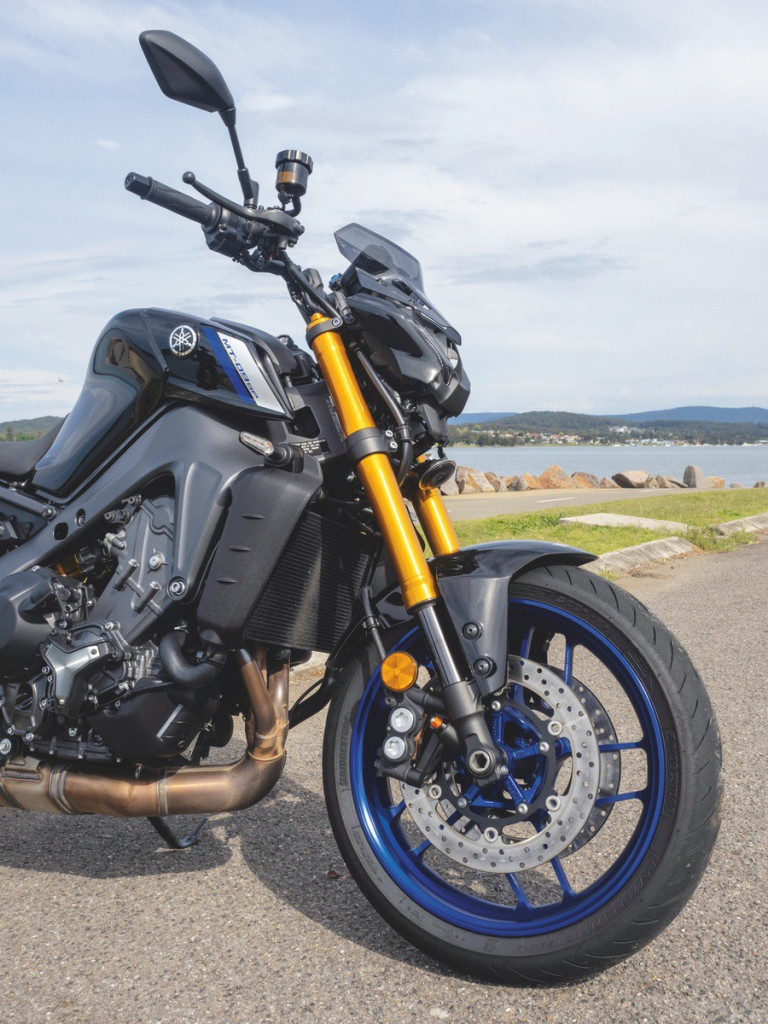 The chassis now features die-cast controlled fill — a way to get the wall thickness more consistent and down to as low as 1.7mm. A redesign has lowered the headstock by 30mm, requiring the engine to be rotated back five degrees. A lower headstock has helped make it easier to load the front tyre for better front-end feel.

The SP features upgraded suspension over the standard model. It’s KYB at the front, adjustable for both high- and low-speed compression damping, rebound damping and preload. The stanchions have a super-hard Diamond-Like Coating (DLC) for reduced stiction.

The shock is an Öhlins remote reservoir unit with remote preload adjuster. Of course, both compression and rebound damping is adjustable. While the suspension isn’t track-spec like what you’d find on an M1 or even an R1, it’s fantastic for a bike at this price point. You’ve got the potential to dial in the suspension to suit your weight, where you ride and how fast.

Handling is delightful. Where the MT-10 feels brutal, the MT-09SP is svelte. It tips into turns smoothly and quickly, it powers out hard without rushing you. Braking deep into corners feels controlled and effortless. Some of this comes from a new swingarm, slightly lighter yet stiffer; some comes from the lighter subframe, but a lot of the improvement must go to the new Spinforged wheels. Shaving 700g off the pair, the MT-09SP’s wheels are now the lightest aluminium wheels produced by Yamaha. The company claims no reduction in strength despite the thickness being down from 3.5mm to just 2mm. They are shod with Bridgestone S22 tyres, which felt great on the road and track. 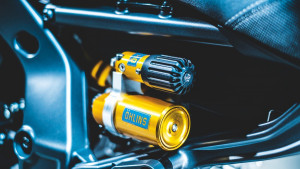 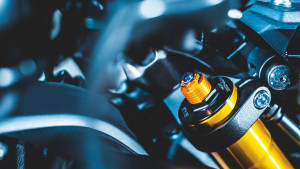 Lighter wheels mean faster turning — less effort is required to get the bike leaned over into corners, which is the main reason race teams spend thousands of dollars for magnesium wheels (but you don’t want them on the street — too easy to damage). Of course, your wheels are unsprung weight too — the lighter the better, provided you don’t compromise strength.

Nissin provides the master cylinders combined with the familiar Yamaha four-piston calipers we’ve been seeing for many years. I didn’t have a problem with the brakes — not the most powerful or trickest on the market, but they worked just fine for me.

As a city bike and weekend blaster, having a 14-litre tank is probably OK. As I get older and grumpier I hate having to seek out fuel stations, so I’d have loved to have seen something bigger, but (as my wife says), “It’s not all about you.” 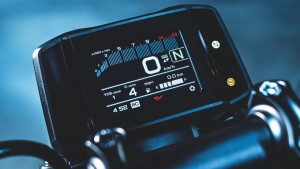 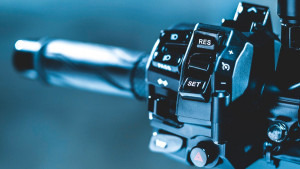 What separates the stock bike from the SP is the suspension and cruise control. It’s the only way to get cruise on an MT-09 and I consider it a free bonus when you look at the upgraded suspension.

There’s one new feature I never got warm and fuzzy about on the new model — the tiny LED headlight. I’m sure it’s better than the old headlight (I didn’t get to ride the old one at night), but I’m still getting my head around the style. I did, however, come to love the quickshifter. It’s up and down and engaging the clutch lever disconnects the quickshifter — so if you ride around town conventionally, like I do, it’s like riding a conventional motorcycle — but bang it through the gears off the lights and the quickshifter takes over, providing quick, smooth changes. On the track I used the downshifting too, trusting the slipper clutch to manage the back wheel as I slowed for turns. It’s great fun and makes gumby journalists feel like superbike racers.

We now have a TFT digital display on the MT09, but it’s pretty small and doesn’t have any interactivity with your phone. There’s not even a standard USB power outlet…

There’s a new IMU to control the traction control, slide control, ABS and wheelie control. You can shut all that off (except the ABS) or just temper their intrusiveness with two pre-set modes — and there’s a custom mode you can set up the way you like, too.

Switching to a new Ride By Wire system for the 2021 models has allowed Yamaha to create updated riding modes. I never liked the sportiest of the old modes and even on a track I’d use the less-aggressive mode 2. Not anymore; Mode 1 is still aggressive, but if you have good throttle control skills, it’ll reward you with excellent response. I still used Mode 2 on the road though — its softer power delivery makes for a smoother street ride. Mode 3 is even softer while Mode 4 is effectively a rain mode with reduced power output. 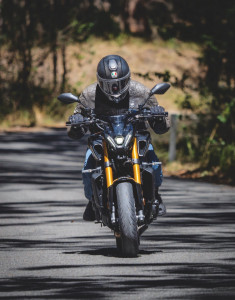 The standard MT-09 has been improved for 2021, especially in its suspension; the improvements make it a better bike than the earlier models. So much so that if you’re not the sort of rider to spend time setting up suspension, if you have never had cruise control and don’t think you’d bother using it, you probably don’t need the SP.

“You’ve got the potential to dial in the suspension to suit your weight, where you ride and how fast.”

If you like charging around curvy roads, if you would like to be able to give your right wrist a break or even take your machine to a racetrack occasionally, the SP is really good value. It’s also excellent for those wanting to learn about suspension — you can feel the differences when you make changes and get the seat-of-the-pants knowledge that comes with making changes and feeling what works.

Yamaha lists over 50 accessories for the MT-09SP, with some of them fitted to the test bike, such as engine case protection. From screens, heated grips and protective alloy parts to USB ports, a top box and soft panniers, there’s a lot you can equip the MT-09 with to make it even more versatile. 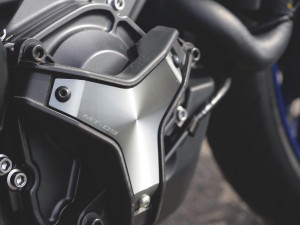 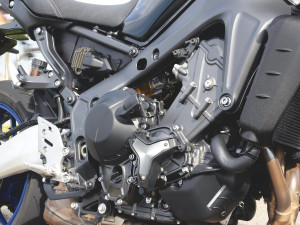 Yamaha’s press kit includes lots of night time images of the MT-09SP being ridden around quiet streets of a big city, and for that sort of thing it’s an excellent choice. Of course, it offers so much more than that as it’s capable anywhere from a race track to a traffic jam.

My second bike is an old Yamaha FZ6N — a 100hp four-cylinder naked. It’s my city bike, my summer bike, it’s my loaner if someone needs to borrow a bike and a bit of a testbed for bits and pieces we write about in ARR. I’d love to replace it with an MT-09SP.

If you own a big touring bike or even a cutting-edge sportsbike, adding an MT-09SP to the garage would give you a capable around-town machine that is easy to ride and super versatile. If you only have one bike, the MT-09SP might not be perfect in the depths of winter and it might not carry everything you’d like to go touring, but it is fantastic for day rides, commuting, sports riding… and doing excellent wheelies! 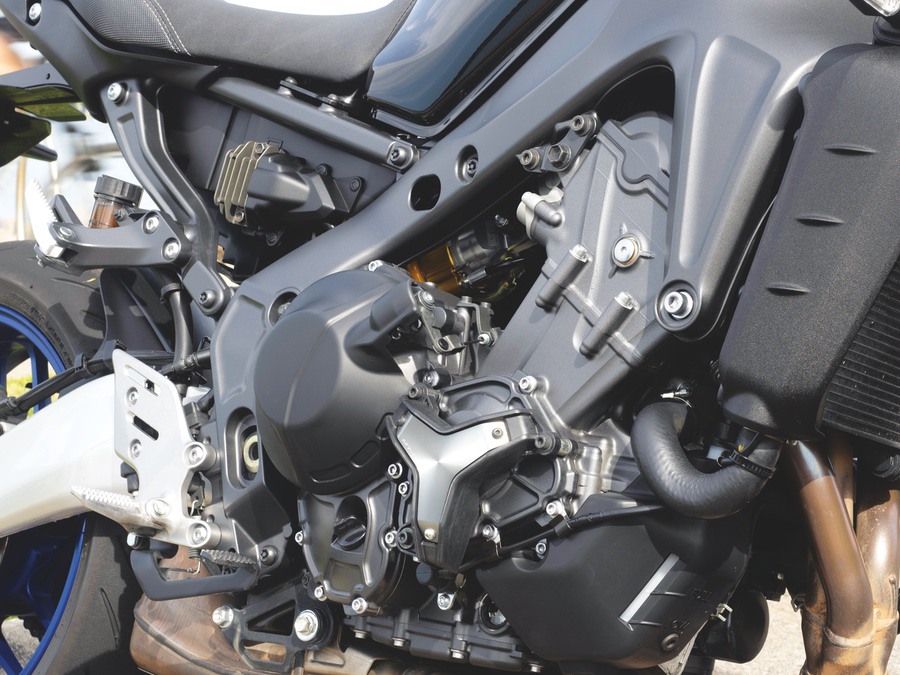 Type: 6-speed, quickshifter up & down

You could save some cash and get four cylinders, but you won’t get the same level of suspension performance.

Another four cylinder bike, the new Suzuki offers more power but in a bulkier package.

The freshly minted new model Monster is a fun package built around a popular V-twin engine, but it doesn’t offer the outright performance of the Yamaha.

Choose from the R or RS variants, both are quick, capable and fun – sportier than the Yamaha, with a smaller engine which revs hard. Doesn’t offer the torque of the MT-09SP.

Could this be the most versatile, best-value hypernaked available today? Rip out a few wheelies. Drop a rolling burnout or two. Set some lap times. Commute to work. It won’t do everything, but the new […]

May 4, 2017 a Road Rider contributor Bike Comments Off

We were recently privileged to be invited on the official Australian launch of the new Yamaha Tracer 700 and sent our resident Pommie road tester Nigel along for the ride. Good job too as he’s […]