When I was a kid I had a yellow-with-black-speed-blocks RD250E, which is how all Yamahas should be painted, by law. Back then a two-stroke 250 would do over 100mph, which is 160km/h in new money and at the ripe old age of 17, it felt like riding a rocket ship. I loved that bike very much, some might say too much, and clearly remember the first time I cogged it down into the meat of the power-band, catching my girlfriend’s feet under my armpits as the bike went into full warp-drive. I was hooked. Not only that but the thing actually went round corners in pretty reasonable fashion too, despite the crap tyres, and I seem to recall riding it as fast as it could go, all the time, everywhere, clouds of blue smoke in my wake.

I practically lived on that bike and it was so much fun I thought I’d never get rid of it and hadn’t the least desire for anything bigger. But, as sometimes happens, a too-good-to-be-true offer came my way in the shape of a Kawasaki GPz550 fitted with super-sexy three-spoke Dymags, which was about as exotic as a Fabergé egg for a petrol tank. 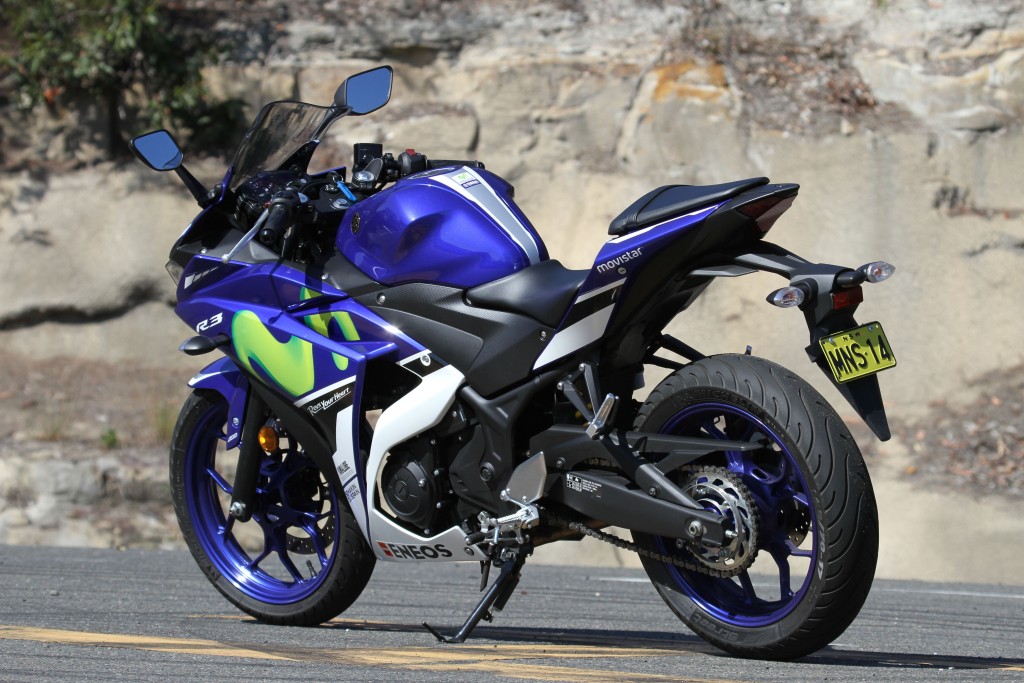 As an adult (sort of), could another Yamaha of similar capacity and performance be as satisfying to ride as that RD was, especially considering the constraints of our hyper-policed roads, or is the drug of horsepower simply too hard to resist?

Well, talk about the sublime to the ridiculous. Having recently spent a couple of weeks on Yamaha’s top-of-the-range Sports Tourer, the FJR1300, jumping on an R3 was a bit like riding a flick knife. With its skinny dimensions and half the weight, I nearly threw it in the bushes at the first roundabout and had to quickly recalibrate the steering effort required. Another area in need of recalibrating was my expectation of the engine’s performance, given that an R3 is 1000cc shy of an FJR. First impressions were that it was pretty gutless, but once I started to ride the thing like it wanted — that is with plenty of revs onboard — I was pleasantly surprised by the engine’s ability, even if it doesn’t possess a girlfriend-losing power-band.

Peak power of 42hp at just short of 11,000rpm and peak torque of 29.6Nm at 9000rpm pretty much clues you up on how to ride this thing, and the motor’s free-revving nature helps you get to the meat of those figures in good time. In fact, it gathers speed in a deceptive manner and I was often surprised to find myself the wrong side of the posted limit when glancing down (closed road, professional rider, always wear safety equipment, no animals were harmed in the making of this sentence). 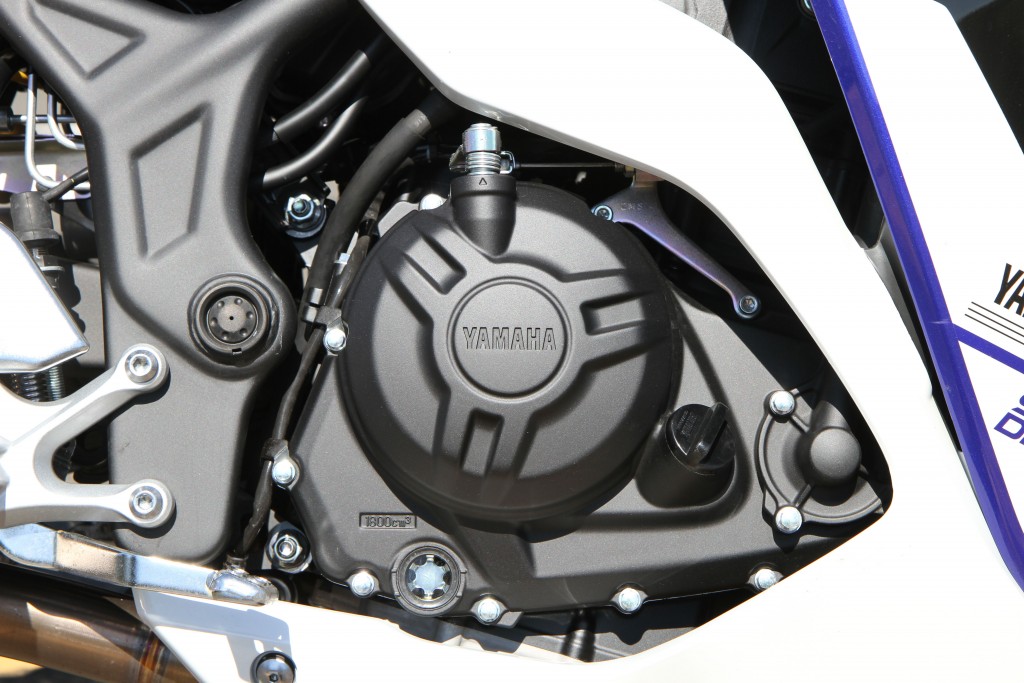 If I was a novice I’d be well happy ripping about on this thing, especially with the limited-edition MotoGP livery (an extra $100 over the standard model at $6399 RRP inc GST) and shorty Akrapovic stainless exhaust system ($849), which at least makes it sound like it’s doing a million miles an hour even if it isn’t. With a long enough straight and a favourable breeze, the R3 will actually top-out at a bit over 160k/h, same as my RD, but bear in mind this is about what an R1 will do in first, so you can readily see the gulf in performance between the two ends of the R spectrum.

However, actual top speed is not really what this bike is about, but we’ll come to that. For the record, the power-to-weight hierarchy of the YZF family sees the mighty R1 having 1hp/kg (which has become something of a standard in this class), the R6, 0.6hp/kg and the R3, 0.3hp/kg. It’s almost as if that’s how they came up with the names, right?

Yamaha has done a great job of styling the LAMS-approved, 321cc, parallel-twin YZF-R3 SP (to give it its full name) to make it appear to be part of its sportsbike family, what with its head-down-bum-up stance, angular fairing and tail-unit, twin headlights, radical tank design, gold calipers and light-weight cast wheels. The bike is clearly aimed at the younger L-plater who’s looking for a cool and credible first bike. However, don’t assume you have to be skinny, a kid or a contortionist to ride one of these pocket-rockets. Ergonomically this is pretty much a full-size bike and at nearly six-foot and 80kg I had no problem fitting on the thing and had plenty of room to move about too. The reach to the clip-ons is slightly short but, as they’re mounted above the top-yoke rather than under it, the riding position is a good mix of racy and comfortable. The all-metal, serrated foot pegs also look the part and although slightly rear-set, they aren’t tucked up under your armpits and, combined with a seat height of 780mm, add up to a bike suitable for grown-ups.

Carrying its 169kg (wet) low-down helps make the bike feel even lighter than it is and wheeling it around in the garage is a doddle. It does feel very slim between your legs, mainly because of the tiny stature of the 14L fuel tank, but of course the parallel-twin configuration also helps keep the whole plot compact and narrow. Consequently, it’s absolutely brilliant at lane splitting. You can almost always find your way to the front of the traffic-light GP, no matter how convoluted the route to get there, and because your hands are the widest part of the bike it makes judging gaps on the way to pole-position accurate and easy. Seriously, you almost never need to slow down when the traffic stops, even in the ridiculously narrow and congested streets of Sydney, and thus can be very easily tempted into performing acts of extreme urban naughtiness as a result. It almost became a point of pride to never put a foot down when negotiating stationary traffic and reminded me of my days as a bike courier in London. 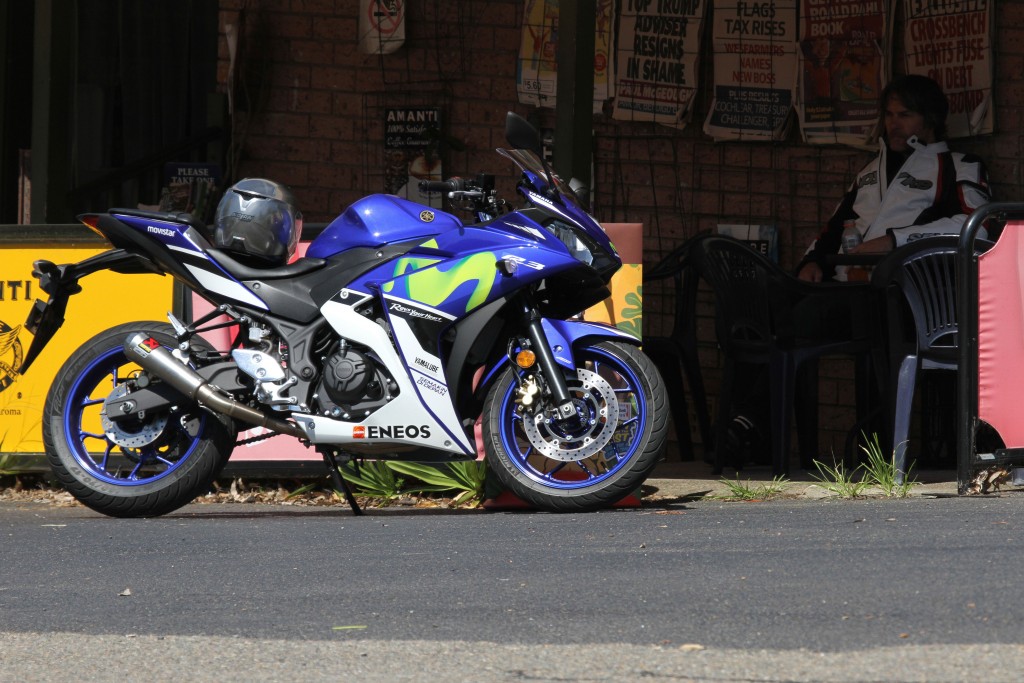 Out of town the R3 is just as entertaining, at least when you point it at some corners. The fact that it can’t go at warp speed means getting caught out by arriving into a bend too hot is less likely, although not impossible of course, but even if you do, the quite narrow 110/70 and 140/70 tyre combination and shortish 1380mm wheelbase means you can flick the thing onto its side in a blink. Changing direction is super easy on the R3 and the Michelin Pilot Street rubber has more than enough grip to handle the lean angle and acceleration forces when you bang the throttle open at the apex. In fact the baby Yam handles pretty well and there’s plenty of feedback from both ends despite the fact, and maybe because, the chassis isn’t the stiffest thing out there, with nerry a box-section frame rail in sight. Although the un-adjustable suspension is pretty basic, the right-way-up 41mm fork is the chunkiest in its class and for the most part neither end has its work cut out controlling the bike’s mass. 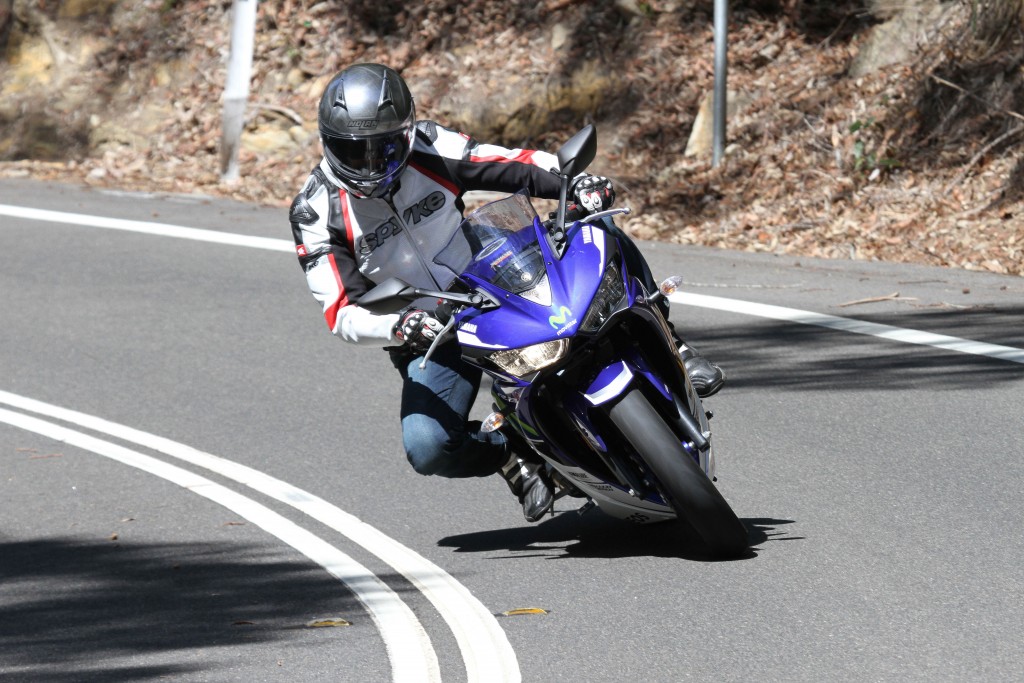 The damping rates are well chosen for most duties, but the rear can get choppy and slightly harsh when cornering hard. The one place the R3 really misses out, compared to its bigger siblings, is in the braking department. I get that the likely customer won’t be that experienced, but when I say you have to give the lever a good pull, I do mean a good pull and, as ABS is standard, they could safely have much more initial bite. However, overall this bike is just good old-fashioned fun and can be ridden really aggressively without permanent worried glances in the mirrors, which is a good thing really as, just like any proper sportsbike, you can only see your elbows anyway.

So where does that leave us in relation to the original question? Can a 300cc bike really be a satisfying alternative to a full-blown litre-bike? Well I guess it depends on your priorities and your experience as much as anything. If you’re on the way up the cc ladder, I’d suggest the R3 can be a very rewarding bike to ride. Because of its limited performance you’re constantly giving it stick and riding to the edges of what it’s capable of, which is a great feeling and incredibly involving. It’s actually awesome fun to hammer along, constantly on the gear-lever (clutch optional), sweeping in and out of turns trying to conserve momentum and with the throttle, more often than not, hard against the stop while you explore the limits of its ground clearance and your bravery. 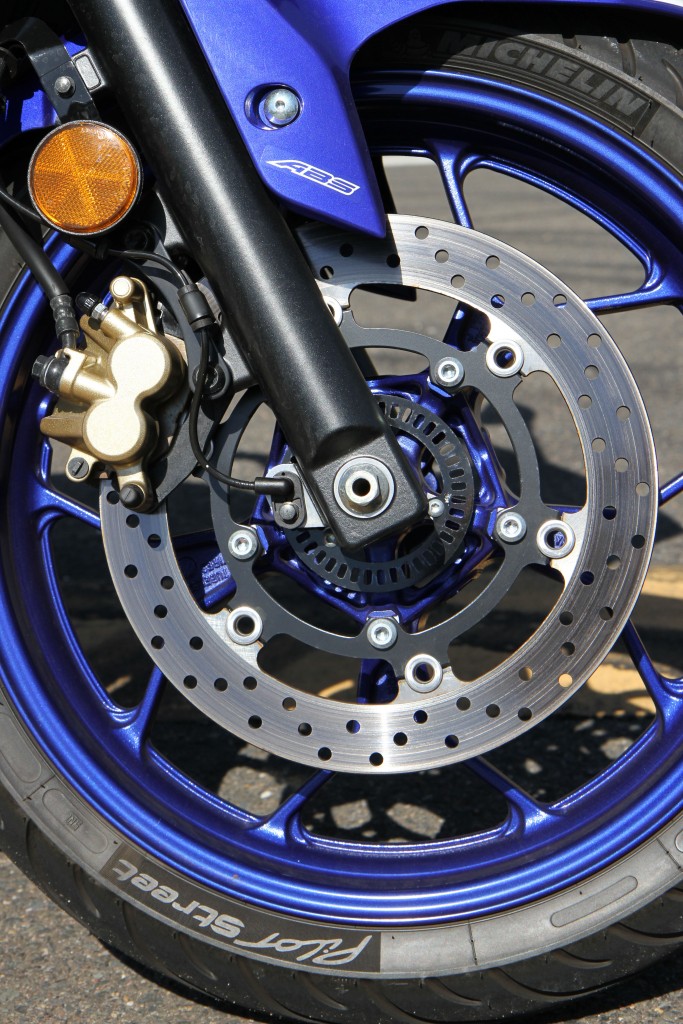 However, if you’re used to riding a bike three times bigger, it’s difficult to see past the lack of horsepower on offer here. There is something utterly intoxicating about having the sort of performance that an R1 is capable of at your beck-and-call, regardless of how often you get to unleash it. It’s exhilarating beyond belief and once experienced, hard to go back. The downside is that most of what an R1 is capable of is un-useable on the road for more than a few seconds at a time, resulting in you constantly having to back off just as the thing gets going properly: infuriating and frustrating. In short, riding any litre bike to its limits on the road is impossible these days and would likely be a short-lived experience if you tried, probably ending with a siren and a stern telling off if you’re lucky, or having a cell door slammed in your face if you’re not.

So would I personally buy one? Probably not right this second, but with sales of big sportbikes in decline generally, and an ever more stringent police presence on our roads, maybe it’s just a question of time. Perhaps what’s needed is a really up-spec R3 with top-of-the-line adjustable suspension, eye-popping brakes, some ergonomic adjustability and super-sticky tyres. Basically a modern-day, four-stroke equivalent of Aprilia’s RS250 but without all that annoying blowing up. That way you could really get your elbow-dragging kicks while mostly staying the right side of the law. I’d totally be game-on for a bit of that action.

Iconic Yamaha models are on display in a travelling roadshow touring Australia to mark the mighty factory’s 60th anniversary. A selection of classic road and dirt bikes are part of the celebration, as are some […]

Yamaha Motor Australia is excited to announce the 2020 MT-03 hyper naked is now available in a choice of three colours; Ice Fluo, Icon Blue and Tech Black. Ride away pricing is $7299 inc GST. […]