Swinging through the bends in the hills north-east of home in sunny Melbourne, early morning, with the easy beat of a giant V-twin, comfortably settled in the leather seat, enjoying the cool morning air. It’s a pretty good place to be.

The bike is brand-new. You can feel the engine clearing its throat and the gearshift action easing as the miles build up. There’s a way to go — another 10-15,000km should see it run-in. The owners might want it back before then. 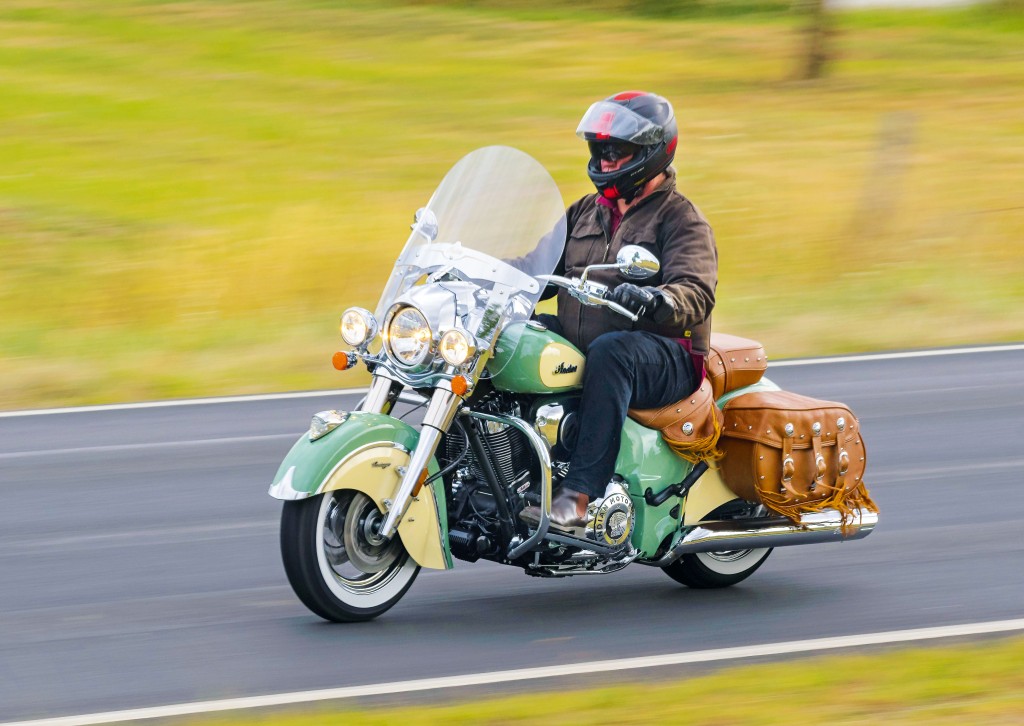 Polaris’ Indian Chief Vintage was, from the day of launch nearly three years ago, the most popular, if not the most capable, model and you can see the appeal.

Much is visual. Put it beside a touring-equipped Springfield Chief from the late 1940s or ’50s and the styling is similar, albeit on a much larger scale. But the basics are there. Big V-twin air-cooled engine with the distinctive parallel pushrod tubes, leather saddle and bags with fringes, studs and conchos (a nod to the decoration often used on western horse saddles), big, long and heavy. And comfortable.

Most of the folk we tripped over that morning could not have given a fat rat’s arse about the history, comfort, engine, whatever — they loved the looks. Okay, let’s go…

First punter, a 50-ish bloke, had a broad Scottish brogue (took a bit to tune in to it) and complimented me on the restoration. It was tempting to play to that theme, but with the acting ability of a house brick it was never going to work. So I told the truth. He still wanted one.

Next was the mid-30s tradie who loved the colours, wanted to know how much, muttered something about saving money and selling his Suzuki Boulevard and strolled off. 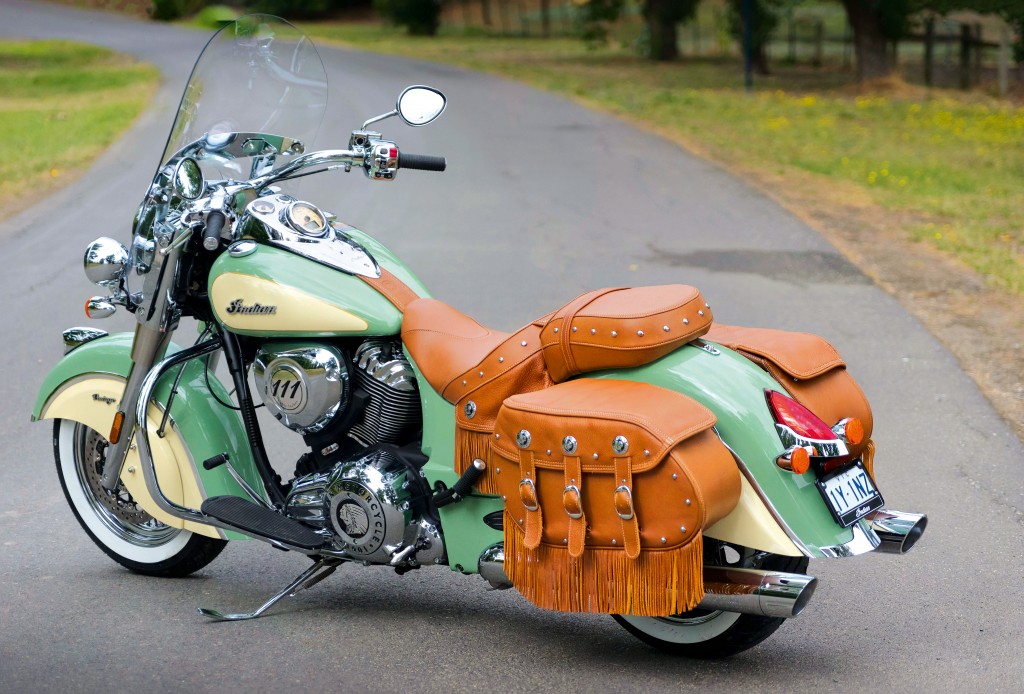 Third, in the space of 20 minutes, was an elderly woman — I’m guessing nearing 70 — who asked permission to get some photos and dragooned some passers-by into helping. She was using an iPad. She was the only one of the three who might just be old enough to have seen that colour scheme, and others like it, when her parents or uncles and aunts had one sitting in the shed.

We’re talking 1940s. A time when chemical and paint industrial giant du Pont briefly owned Indian and you could order the bikes in pretty much any paint combo you wanted. Two-tone pastels were popular.

It was more than the colour. A Chief Vintage is an outrageous exercise in excess — long and heavy, those deep-dish guards first used in 1940, the in-your-face lit Indian head motif on the front, acres of leather, the triple chrome light set up front and the giant screen. It’s one of the things you might dream about in a steam-punk movie, but to actually own and ride one? Give me a break…

Time and competition have caught up with Indian, but when the Chief Vintage and its brethren were launched a few years ago, they kind of put a flag in the territory of cruiserdom.

Performance and handling were good for the class and then there was the packaging. All of the Chief series (three at launch: Classic, Chief Vintage and Roadmaster) had ABS and cruise control. In a sector more used to qualified praise (it’s good for a cruiser), the idea of having some basic electronics on board that actually made your life easier, across the entire range, was a bit novel.

That was the wrapping on a mechanical package that still held firmly to American cruiser spec: air-cooled pushrod V-twin with two valves per pot, albeit fuel-injected.

Dubbed the Thunder Stroke 111 (for the cubic inches), the engine is a 49-degree twin running three camshafts — one to run the inlets from the centre, and the other two to actuate the exhausts. A longstroke design, it displaces 1811cc. 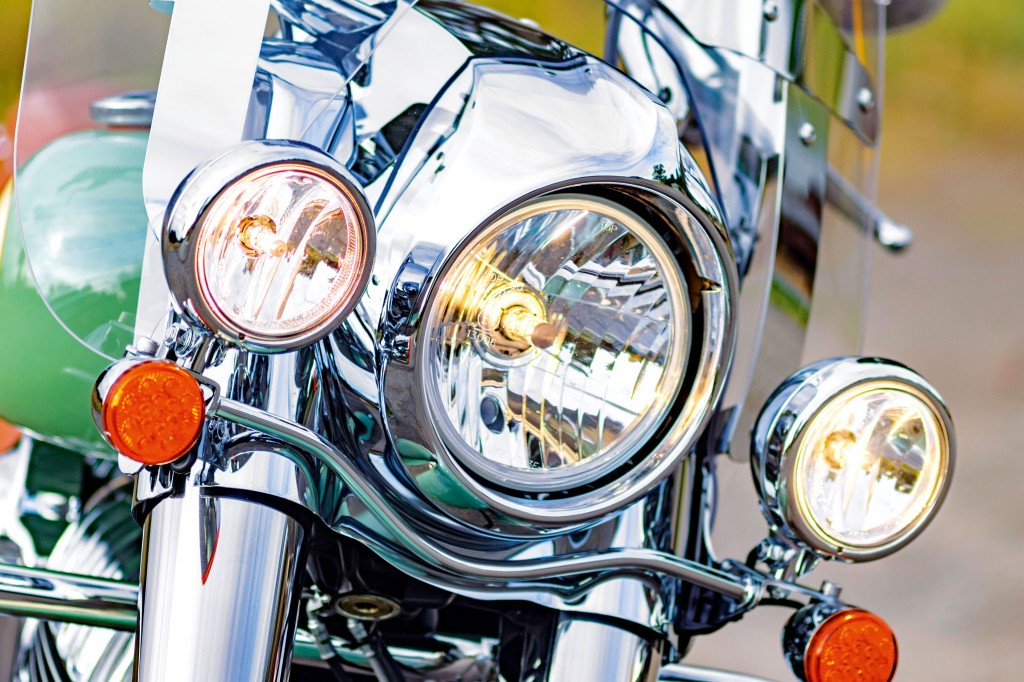 Indian, like Harley, is coy about the horsepower figure, but independent dyno runs place the rear wheel figure at around 73 horses at 4500rpm. Believe it or not, that’s pretty good for this type of motorcycle in stock trim and supports the idea that the crankshaft number is probably mid-‘80s.

Despite the fact one of these monsters weighs close to 380 kilos, it’s enough (combined with a healthy peak torque number that cuts in at a low 2500-3000rpm) to make it get off the line well.

No-one on anything resembling a sports bike will be scared. There’s enough urge to overtake with authority and you can, with a bit of room and maybe a tailwind, get it showing the high side of 180 on the clock.

In reality, what this means is, though there are lots of faster motorcycles, it can punt along at a more than acceptable pace and cover ground rapidly when you want to.

If you haven’t already caught up with the modern world of electronics on cruisers — yep, sounds like an oxymoron — you will quickly with an Indian. It uses a proximity key, which means a round fob that needs to be with the bike for it to start and keep running. There is no actual key or hole. Harley has been doing a version of this for ages.

You push the On switch firmly, which wakes up the minimal dash and the fuel injection. Then you stab the starter button — there is no need to hold it, as the electronics take over and decide how long the starter motor needs to run before the engine fires up. That’s been common upmarket Euro car practice for about 20 years. 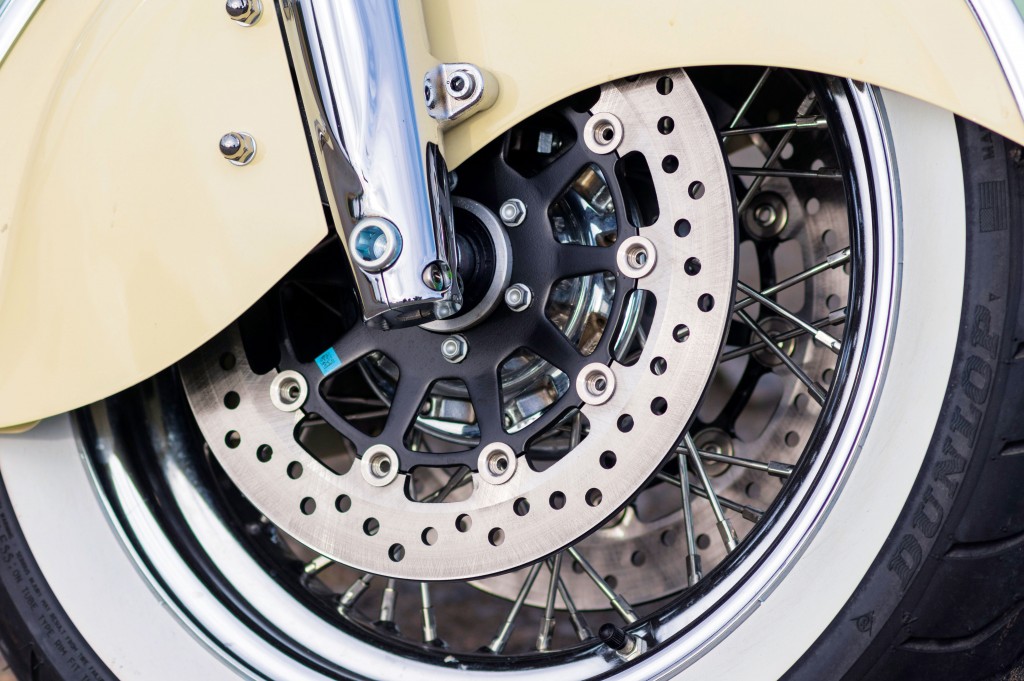 Once it wakes up, it appreciates about 30 seconds to get settled before you take off, though you can do it instantly. Clutch action is progressive and friendly.

When you’re up and rolling and fully awake, the throttle response is good. This is a well-sorted combo of injection system and engine. It’s all about roll-on strength, linear delivery and clean response. If you’re looking for frenetic acceleration at the drop of a hat, go elsewhere.

There are two main chassis in the Chief range: one shared by the likes of the Classic and Chief Vintage, and the other by the Roadmaster and Springfield. The first is a styling exercise that has more rake (looks more cruiser-like), while the second is a slightly quicker-steering unit with more ground clearance. That’s a classic form or function choice. I prefer the latter.

That said, the Chief Vintage is entirely predictable and can be punted quickly enough. On the plus side it has decent brakes and you get plenty of warning as it starts to run out of cornering clearance.

The suspension is capable and offers little in the way of tuning, other than a preload ring on the rear shock. There’s a suspicion that two really big people on board might force an upgrade of the rear suspension, otherwise you should be fine until you clock up big miles. 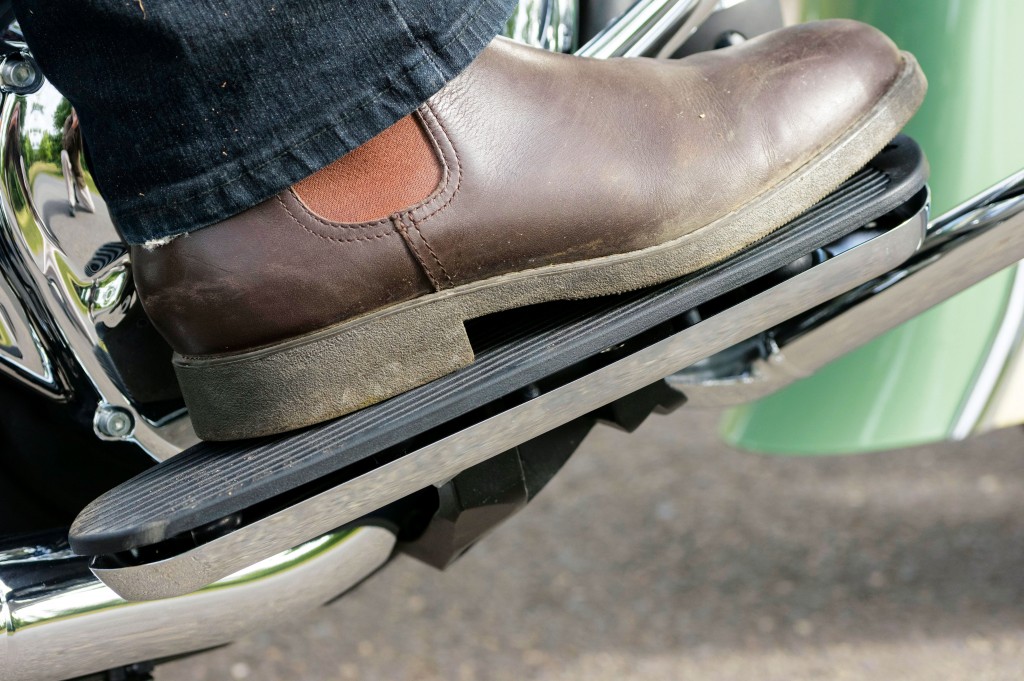 Braking is good. The feel is right and there’s the ABS back-up, while there’s enough rubber on the road to provide decent grip. Also, there are no surprises if you have to get on the anchors mid-turn. The only proviso is you really are dealing with heavy machinery, so allow some space.

Two accessories I would fit immediately are a pillion backrest, because that would immediately make the machine passenger-friendly, and the other half of the gear-shifter. Standard, the Chief Vintage has a simple conventional gearlever, when all big cruisers with footboards (no exceptions) work far better with a heel-toe unit. Trust me — once you get your head around one, you’ll never go back.

That would also make the slowish transmission a whole lot more enjoyable.

Over the years I’ve sampled a lot of Polaris motorcycles: Victory (which is no more) and Indian. Regardless of whether or not an individual model suits your taste, there is an overwhelming sense that the company knows how to engineer a good motorcycle. 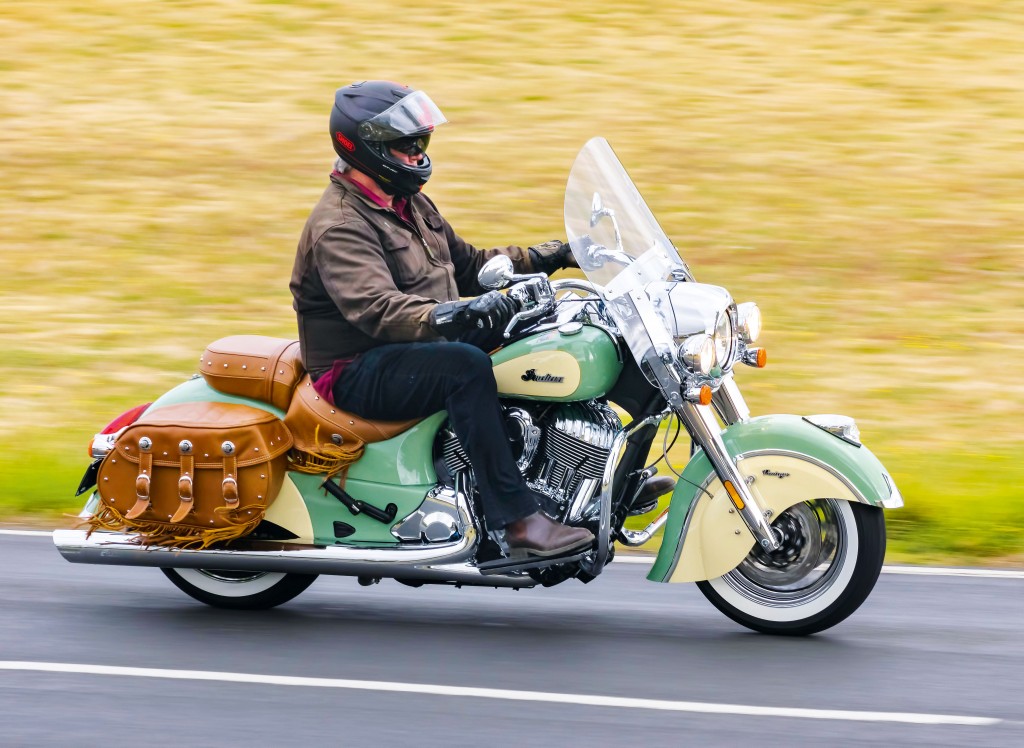 The current Chief Vintage, which is simply the previous bike in new colours, is a good example. It works and, after some cosmetic issues with the initial batch, is a well-settled machine. I’ve got a bit of faith in it and like what it does.

Apple CarPlay on Indian – Your iPhone while riding

Indian Motorcycle has announced the integration of Apple CarPlay® to its model year 2020 lineup of bikes equipped with the 7” Ride Command system. * From the Press Release: Apple CarPlay® is now supported on […]

Moto Guzzi says its bold new MGX-21 Flying Fortress is the cruiser to cross the future, a blend of Italian taste and American style. And given the brilliance of the California models from which the […]