East of the Rockies, in Colorado, I follow Route 50 as it descends to the Great Plains and follows the old Santa Fe Trail through Cheyenne and Arapaho Indian country towards Kansas.

I pull up for the night in Fowler, a town small enough to have no chain motels or fast food “restaurants”. Instead, I’m in the salubrious surrounds of Bushy’s Blue Sky Motel for the princely sum of $48, and dinner’s at the Tamarack Grill, just across the road, where the culinary highlight of the trip thus far is placed before me: a piece of home-made banana cream pie the size of Tasmania. I think it might just be the best $3.25 I’ve ever spent. 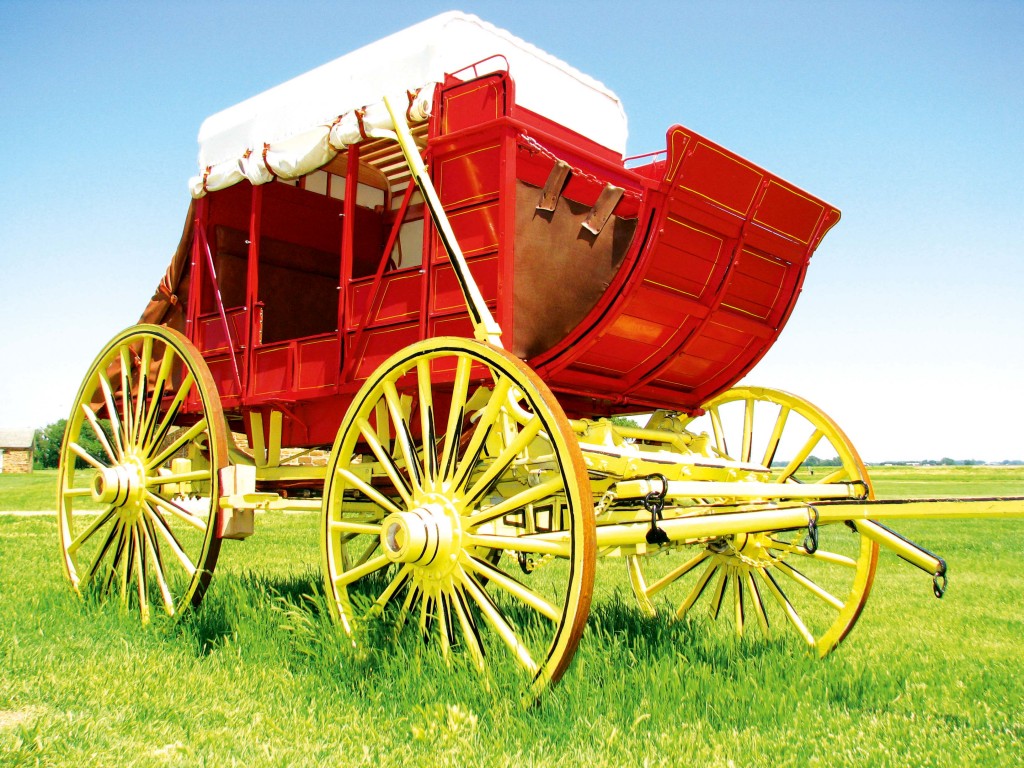 Breakfast the next morning is even more spectacular. It’s the Tamarack’s “Breakfast Burrito”: eggs, sausage, cheese and onion, wrapped in a big tortilla and smothered in green chili. Talk about a breakfast of champions. I reckon I could power the Harley out of here without even firing up the engine, if you get my, err, drift…

We’re in Kansas, Dorothy. Trump country. Everybody flies the flag. Roadside billboards proclaim the evils of abortion. Big, chunky F Series, Chevy Silverado and RAM pickups are the locals’ trucks of choice, most with a “Bambi Basher” on the front for protection from errant local wildlife.

Kansas is a vast broadacre wheatbelt, just like southern WA, western Victoria and north-western NSW. So I ride on towards an endless, dead-flat horizon, inhaling the aromas of agriculture: fresh-cut hay, cow shit, superphosphate. Every 50km or so, an onion-shaped water tower and wheat silo appears, the first indicators of another tiny town up ahead. Jettmore, Burdett, Pawnee Rock… 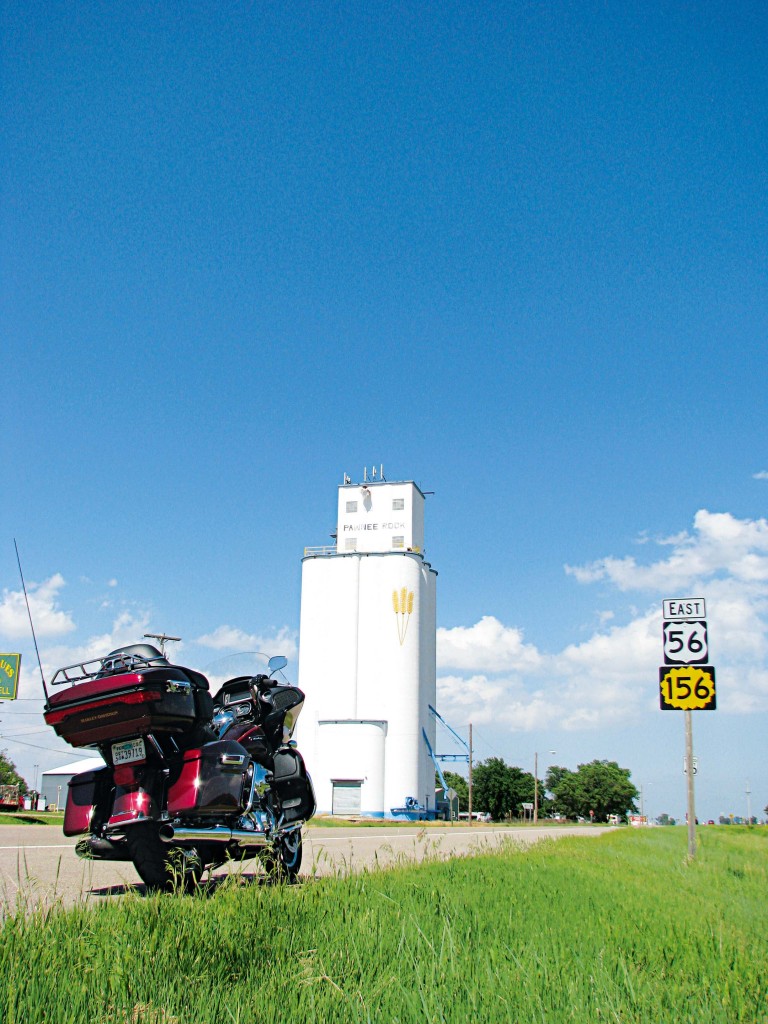 The farm machinery dealers looks like they’re doing okay — recent seasons must have been kind. Some farmers have got in early with their summer crop and the fields are patterned in golden stubble and green shoots. I’m smacking into some 747-sized bugs that are creating quite a psychedelic splattering of colour on my visor. It’s hot, somewhere in the high 30s. Chipmunks dash across the road in front of me. Birds sit idly on the wire above the shiny, shimmering train line.

You work hard for your miles out here, using the same tactic to cut out big distances as you do at home: ignore the numbers on your trip meter and don’t look at the signs. Just let time become irrelevant.

[pullquote]“Think. Dream. Enjoy. Tell yourself that in a few days you will wish you were still out here. It’s true”[/pullquote]

I play tourist for an afternoon and visit Fort Larned, one of many forts along the Santa Fe Trail where the US army stationed garrisons in the mid 19th century to protect settlers heading west and keep the local Indian tribes under the yoke. It’s not a pretty history, but we have a similar version, so the stories of displacement, betrayals and massacres are familiar.

It’s tornado season in Kansas, and over breakfast I watch a weather channel on TV that’s tracking half a dozen of them. Everybody is nervous. Tornados are ephemeral, completely unpredictable things, often with a footprint no bigger than a suburban house block that can form in an instant, completely destroy and kill whatever gets in their way, then vanish, literally, into thin air. This part of the Midwest is the epicentre of “Tornado Alley”.

It’s dead calm, hot, humid, and the sky is saturated with heavy green-tinged cloud that touches the top of the power poles as I ride east on 50, which becomes Interstate 35 for a while as it traverses the Flint Hills and bypasses Kansas City en route to Missouri. I’m keeping an eye out for tornados, and at the very least expecting the mother of all rainstorms. When it happens, I’m grateful. 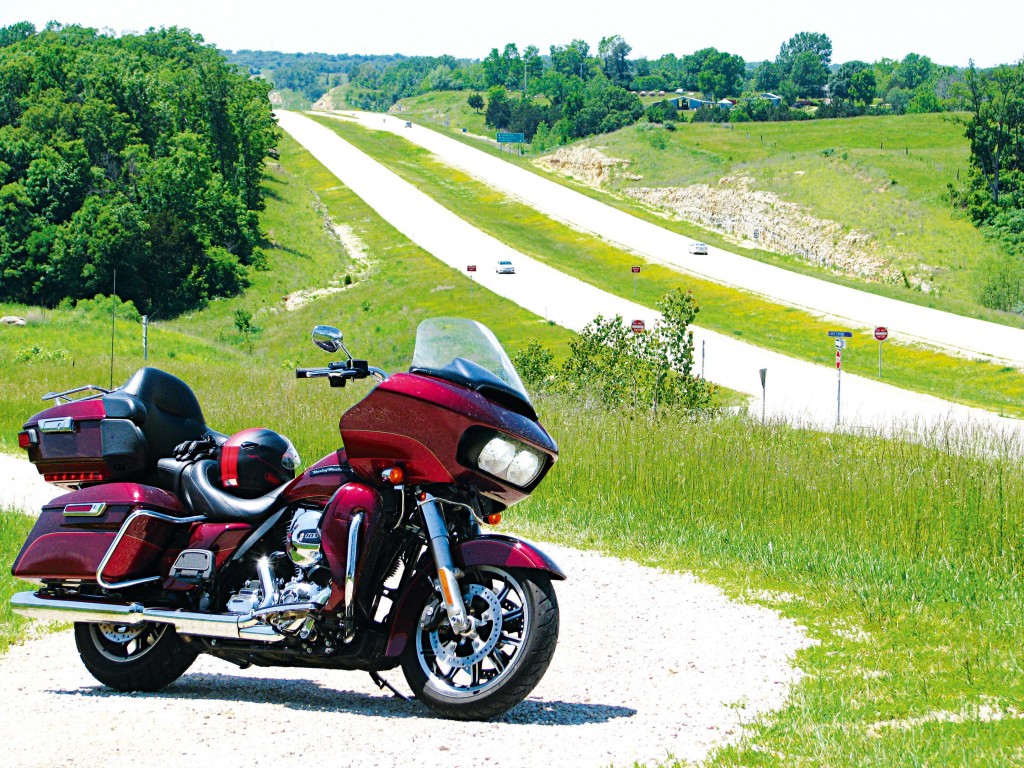 It’s spring in Missouri and I ride through lush-green cornfields as 50 climbs into the Ozark Hills, east of Jefferson City. I pass by St Louis to the south and catch a glimpse of its famous arch through the gloom.

The Ultra offers reasonable wet weather protection, but the fairing has clear plastic wings on its lower trailing edge that direct water straight onto my knees from where, of course, it ends up in my @#$%ing boots. My gloves are also saturated in no time flat.

I hammer through the rain, which persists for the day it takes me to traverse the southern end of Missouri and Indiana. When the sun returns, I’m in Madison, Indiana, one of America’s best-preserved old towns on the banks of the Ohio River. Across the river, massive power stations belch burnt Kentucky coal into decidedly unclear skies. 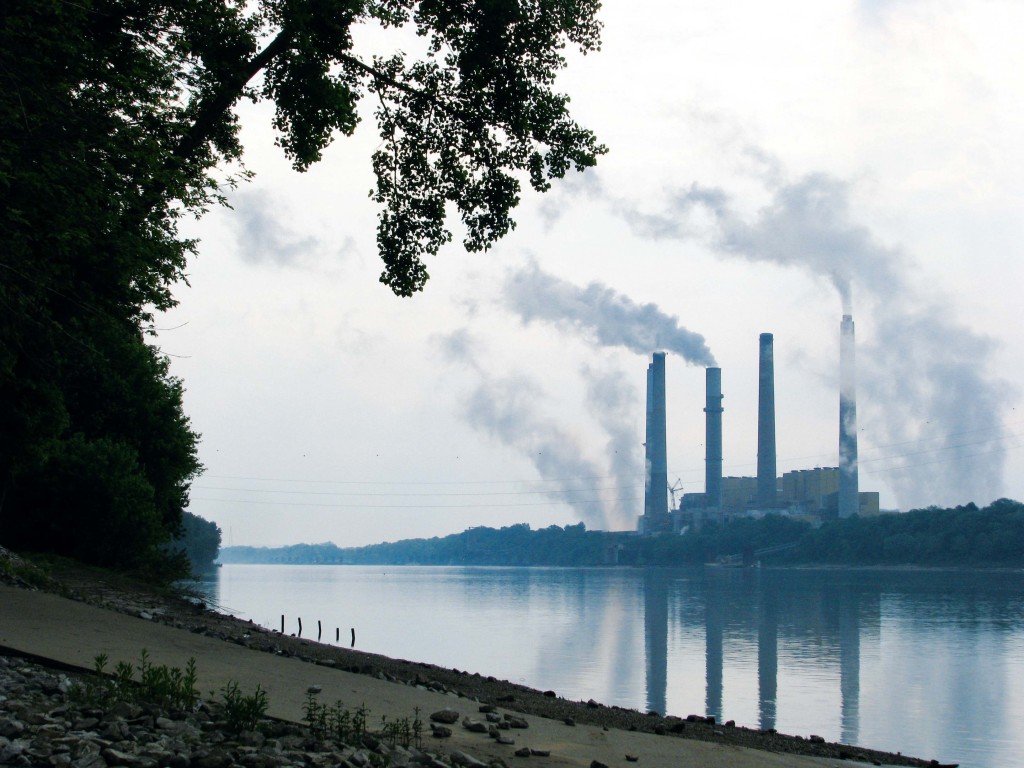 The terrain becomes hilly and forested as I cross into Ohio, then flattens out again as 50 heads into more wheat country. Lunch is a banana shake at the Buckeye Dairy Bar in Hillsboro. It’s got real bananas in it. See, you can find decent road food in America.

The states are smaller and more tightly packed on the eastern side of the US, which is also where most of the population lives, so there’s a lot more traffic now on Route 50. Still, as we cross into West Virginia and ride across the northern end of the Allegheny and Appalachian mountains, I get the sense that by US standards this is remote country — not quite hillbilly territory, but close enough to hear the banjos playing.

[pullquote]“I stop for gas at a lonely roadhouse in the forest. They sell fuel, coffee, Glock, Luger and Beretta pistols, rifles, semi-automatics and machine guns”[/pullquote]

The nice man shows me an AK45 semi-automatic assault rifle that I can have for just $745. I hate guns, but this is probably the only chance I’ll have in my life to hold such a serious killing apparatus. It’s bizarre beyond words. I’m in a petrol station, for God’s sake. A couple of little old ladies are buying Twinkie bars at the counter next to me.

Because I’m from out of state, I can’t just hand over the cash and take my new gun like a local. He’ll have to do a check on me first, just to make sure I’m not a pacifist or a Democrat. It’ll take about 10 minutes, he says. When I explain our gun laws he looks at me as though I’ve just told him I’m from Mars. “That would never happen here,” he says, in a tone that suggests he would make damn sure of that. 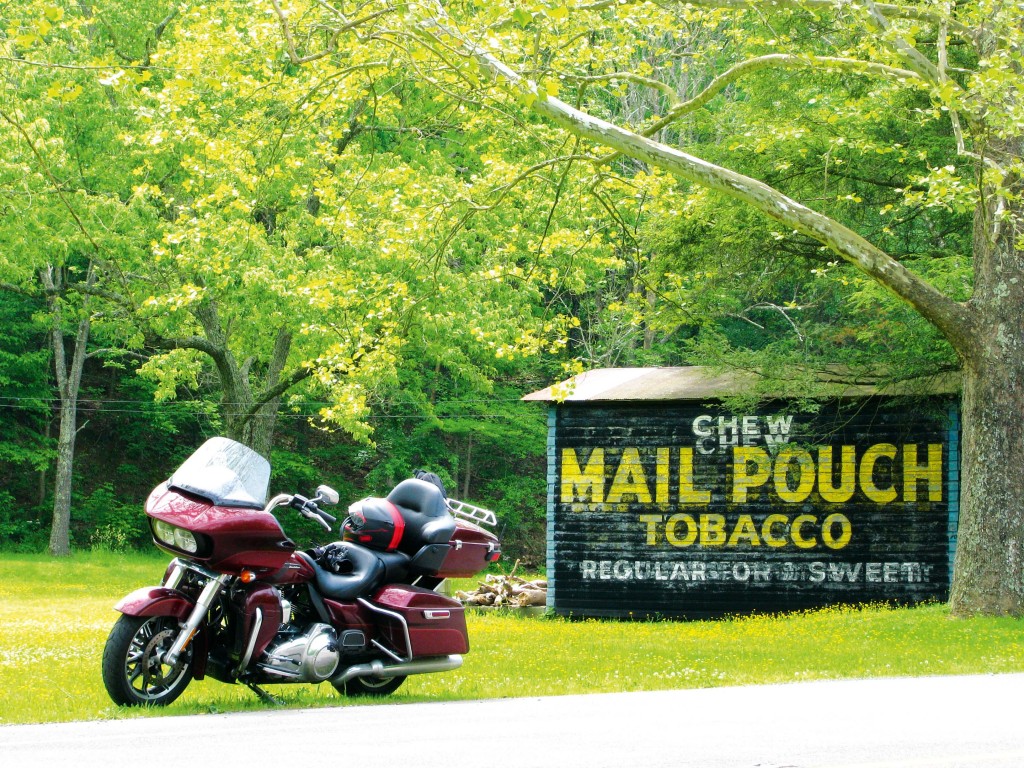 It’s a lonely ride as 50 winds its way through the hills towards West Virginia, passing small, busted-arse communities that once thrived on the back of coal and timber but are now populated by those either too old or unable to find work. We’re at 1000m or so, the temperature has dropped and towering oaks line the road. I’m starting to see a lot of bikers heading in the same direction.

It’s the Friday before the Memorial Day holiday weekend. Memorial Day is America’s equivalent to our ANZAC Day, and part of the tradition is that biker veterans from around the country ride with their mates to Washington DC for their annual rally, the “Patriots Ride”.

Several groups of them are staying in the same motel, on the outskirts of Washington, where Route 50 meets the Beltway. Harley baggers are their machine of choice, but many of the older vets, or those who can’t manage a motorcycle for health reasons, are on Cam Am Spyders. Almost all of them fly the Stars and Stripes from their machine, along with the banner of whatever unit of the armed forces they served with. Their colours tell their war stories too. The lament of vets everywhere is that they are treated badly by the country they served, and these guys are no different. I’m tempted to spend another day in Washington and go to their rally, but in the end I don’t because it would be disrespectful. Donald Trump shows up, though. 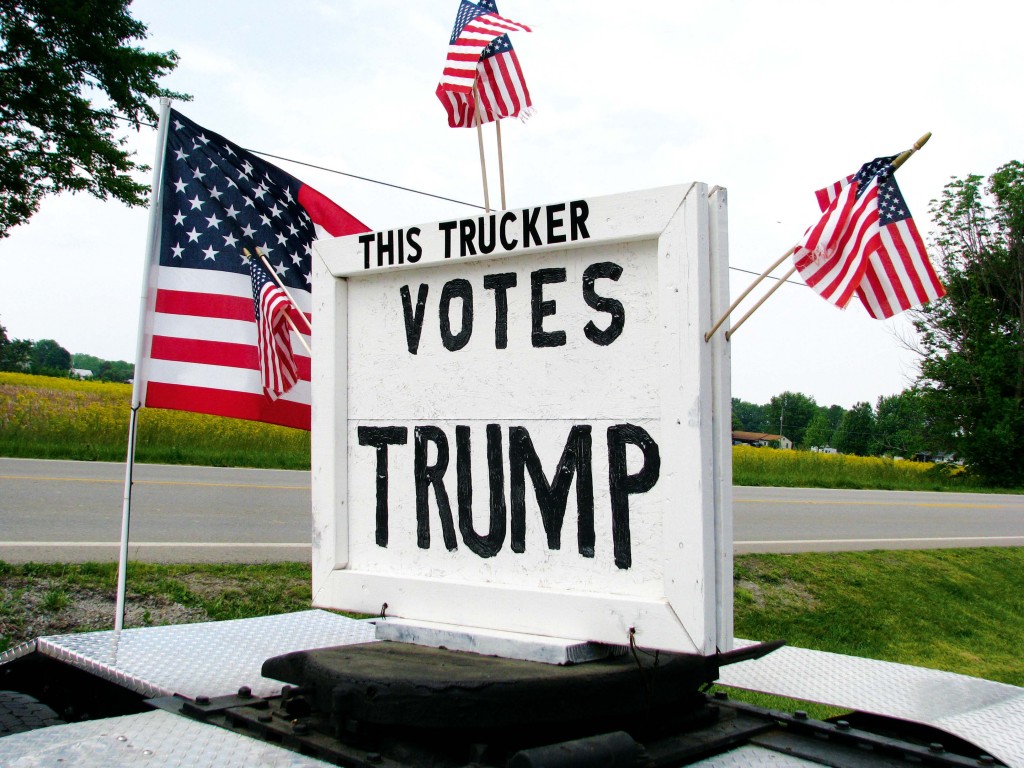 My last day on Route 50 is an easy 300km cruise around Washington and across the Chesapeake Bay bridge into Maryland. It’s a flat run south-east to the coast, where Route 50 terminates at Ocean City.

The name sounds rather grand, but Ocean City is a charmingly shabby joint, sort of like the Gold Coast in the 1970s before all the high rises took over and it became a monument to bad taste. It’s chocka with families enjoying the holiday weekend. I pull up at my hotel and right there is the Atlantic Ocean. It’s taken me 10 straight days and 5680km to ride across America on its last remaining two-lane transcontinental highway. I need a day off. I take a stroll along the beachfront boardwalk, drink some beer and hook into a pile of fried shrimp at Belly Busters Crab Shack. It’s the best food I’ve had all trip.

I’ve still got a few days up my sleeve before I have to return the bike, so I decide to ride up to New York City, 400km north, via America’s most amazing freeway, the New Jersey Turnpike, which starts about 100km south of the city. I can’t quite work out how many lanes it has, but I think it’s about 20 in total, so 10 lanes each way, with the truck lanes on the outside, completely separated from cars. There’s very little traffic today and I’m adrift in an ocean of concrete. It must be insane when it’s busy.

Americans aren’t as disciplined on their freeways as Europeans. They’re a lot more observant and considerate than Australian drivers, though. They will overtake a slower vehicle on either side, depending upon which lane is clear, and use of the indicator is optional. There’s no inside “fast lane” as such, though that’s where the low-flyers hang out. There are plenty of highway patrol cops on the Interstates, where speed limits vary from 60mph to 80mph. 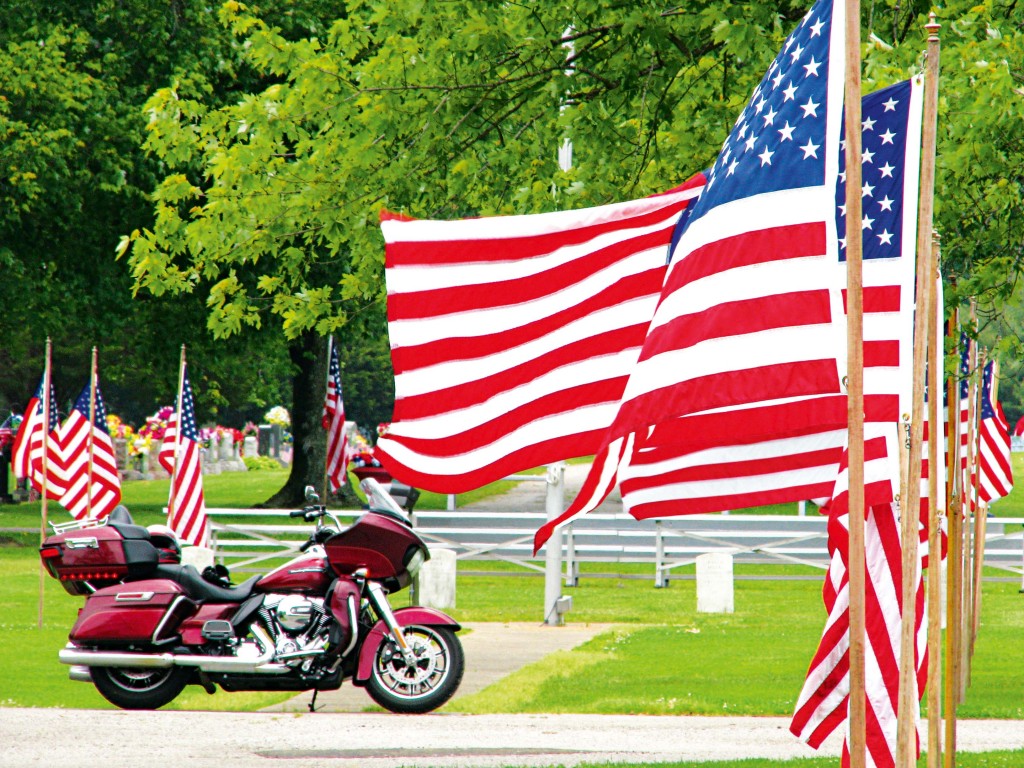 I’m sitting in the middle of this mega-road, chugging along at 70 or so, wondering if it really is a good idea to ride straight into the guts of New York City. The Harley has navigation, so how hard can it be? I swing into the Holland Tunnel that runs under the Hudson River and will spit me out close to where I need to be, in downtown Manhattan’s Soho district. Halfway through the tunnel, the navigation loses the signal and I get the black screen of death.

I had no idea of what to expect or what I would find when I set out from LA on this ride across America, so it’s fitting, I suppose, that I’m going to finish it completely clueless about which way to go. Then I realise it doesn’t matter. Just pick a road. Ride it. See what happens. Easy.

Words: Roderick Eime Images: Eime, Paterson, Cross, Krause, supplied The Hunter Valley, less than two hours’ ride north of Sydney, is a fabulous area to visit by bike. There are some awesome roads to the […]

The World On Wheels tour company, in collaboration with the Fred Hollows Foundation, are launching a ride for charity in January 2017 The event is a national ride to raise funds for the work of […]