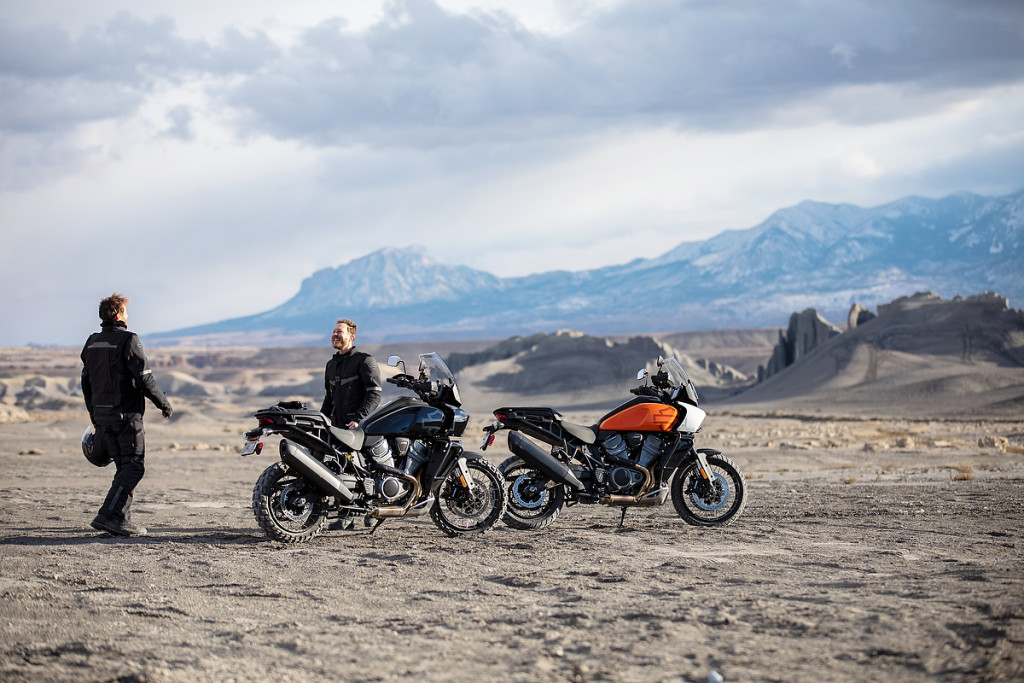 Powered by the new Revolution Max 1250 engine, a 60-degree liquid-cooled V-twin which produces 150 horsepower, the Pan American looks to be competitive with the European and Japanese adventure bikes.
Weather Harley-Davidson can enter a new market niche as competitive as big-bore adventure bikes remains to be seen, but it’s always good to see new options and competition.
Two models will be offered, but Australia and New Zealand will only be getting the up-spec Special. Bikes should be available in the third quarter of the year with a ride away price of $31,995 ($33,995NZD). 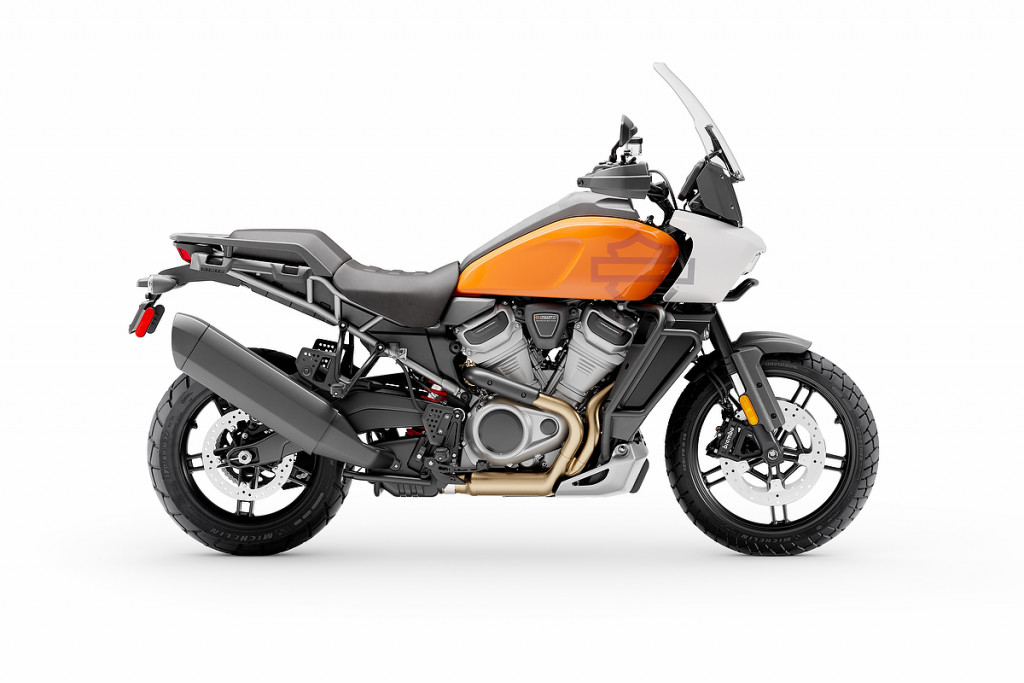 With a 21 litre tank, seat heights configurable from 772mm to 830mm, a wheelbase of 1580mm, 320mm Brembo front discs, 127Nm of torque, lots of advanced electronics including semi-active suspension and numerous riding modes, the specs sheet certainly looks good.
The styling has been polarising, with many adventure riders condemning the rather conservative styling.
A factory option is the Adaptive Ride Height (ARH), “a revolutionary new suspension system which automatically transitions between a low stopped position and optimal ride height when the motorcycle is in motion”, according to the press release.
At 254kg wet for the Special, it is weight competitive and a full line of luggage, riding gear and will be offered. 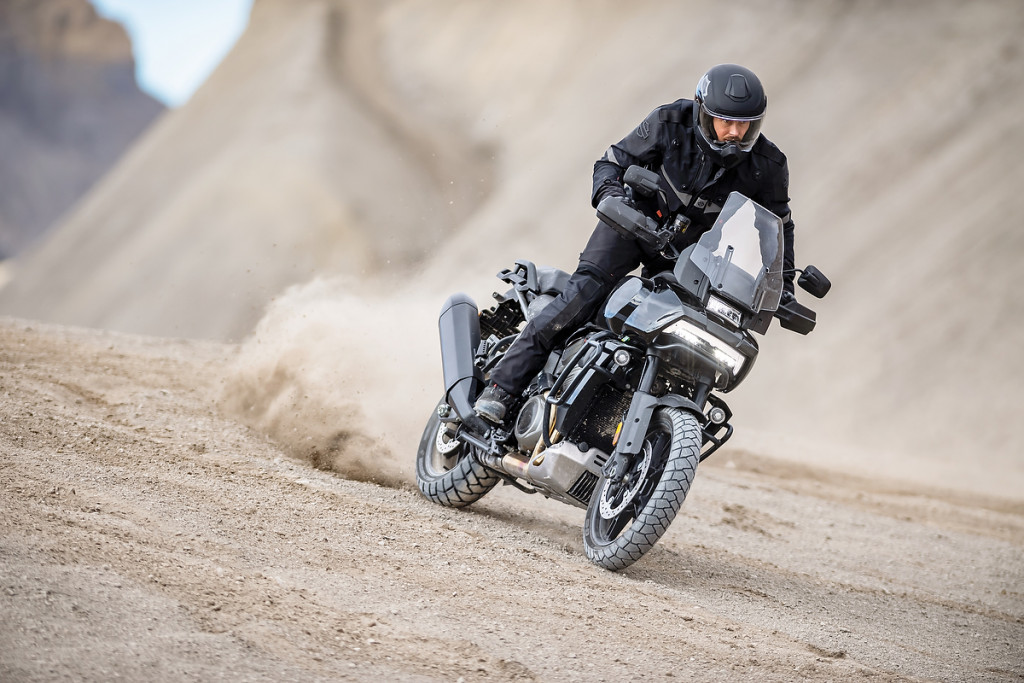 The engine features variable valve timing on both the intake and exhaust valves, hydraulic self-adjusting lifters and four valves per cylinder. Compression is at 13:1, so premium fuel will be required. The transmission features a slip and assist clutch, 6 gears and chain final drive.
Cast aluminium wheels (19-inch front and a 17-inch rear) are said to have been specifically designed for use of gravel roads and fire trails. Tubeless laced wheels will be offered as an option.
Harley has worked with Michelin to produce special Scorcher and a more dirt-focussed Anakee Wild tyres for the Pan American.
The engine is a stressed member of the chassis, so much so that the steel trellis frame is broken into three components – the front, mid and tail – which all bolt on to the engine. The swingarm is cast aluminium. 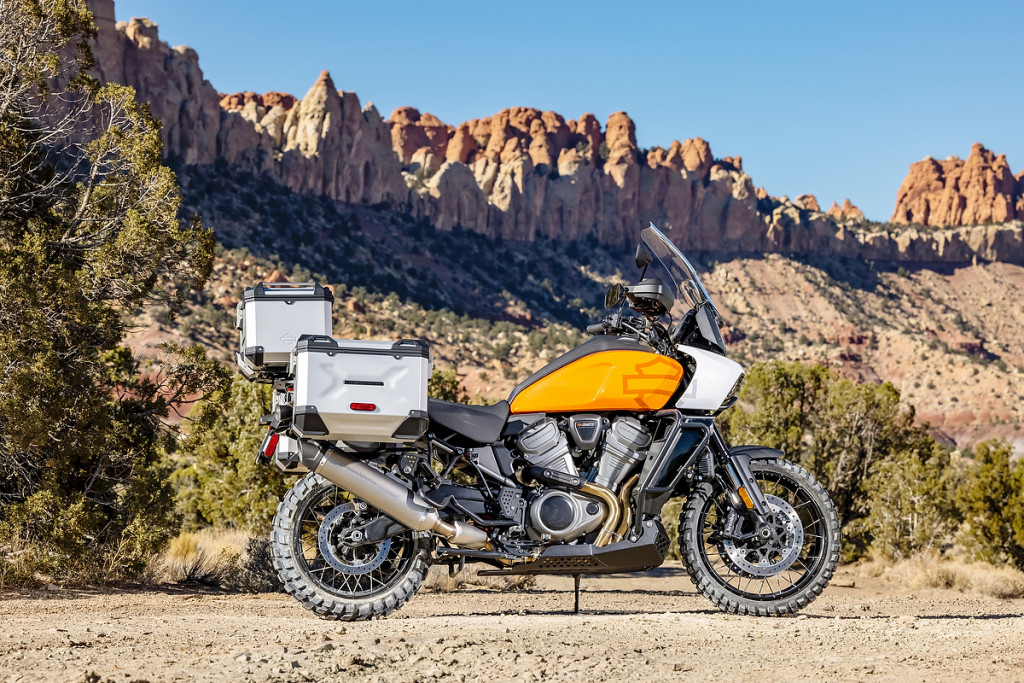 47mm USD forks ride up front with a single Piggyback shock with hydraulic preload adjuster, both from Showa, are standard equipment. The suspension is fully adjustable and the shock is mounted on a progressive linkage.
The instruments are a 6.8-inch TFT display with full Bluetooth connectivity and navigation is supplied by the free Harley-Davidson App.

Harley-Davidson, the company that has defined the motorcycle industry for the past 115 years, showcased its next generation of two-wheeled transportation at the Consumer Electronics Show in Las Vegas, unveiling the full product specification, connectivity […]

Looking at all the exciting photographs of Harley-Davidson’s new Pan America adventure bike, the eagle-eyed among you may have noticed a certain similarity in the riders’ attire. That’s right. In conjunction with the release of […]