In truth, this story begins in January 1952 when two 20-something adventurers climbed aboard a spluttering 1939 Norton 500cc motorbike, dubbed La Poderosa (“The Mighty One”), and set out from Buenos Aires on a grand adventure across South America.

That “grand adventure” evolved into the seminal book and film, The Motorcycle Diaries, which quickly rose to cult status and set in train a series of momentous events that preceded my arrival in Havana.

The man at the centre of these events was none other than Ernesto “Che” Guevara, the Argentinean Marxist revolutionary and posthumous pop art icon who, along with Fidel Castro, yanked Cuba from the yoke of its corrupt capitalist masters and installed one of the most durable regimes of modern times.

As a mere crumb on the breakfast table of history, my own adventure was nowhere near as grand, but still tantalising nonetheless in the knowledge that all these happenings led me to my meeting with Ernesto Guevara-March, the youngest son of Che, and fellow motorcycle enthusiast.

“I’ve loved motorcycles for as long as I can remember,” Ernesto tells me as we sit at the bar of his favourite cafe in Havana, the Harley-themed Chacon 162 in the UNESCO-listed Old Town Centre. That’s his red 1950 Flathead hanging on the wall. “It seems like I’m the only member of the family who has inherited my father’s love of motorcycles and that passion helps me connect with him.”

Che died in a hail of bullets in Bolivia in 1967 while trying to spread more Marxist revolution. His youngest son was just two. Nowadays Ernesto Jnr walks the streets just like any other anonymous Cuban, his famous father’s iconic likeness on every street corner, t-shirt, postcard and fridge magnet. It’s no wonder, then, that Ernesto likes to talk about Harleys, not his dad.

Ernesto has another five ‘50s-era Flatheads at home, salvaged from former government duties like police and post office. There’s also a 1939 Norton built from parts of the original bike his father rode 55 years ago and that was used in the 2004 movie. Then there are the 14 modern Harley-Davidson machines owned by the tour company with the unsurprising name, La Poderosa Tours. For a guy who trained as a lawyer, Ernesto sure has an obsession with motorcycles, restoring them and riding them. “After so many years they become part of you,” he explains.

INTO THE TIME WARP

For anyone who’s been to Cuba or even seen a postcard, there’s no mistaking the “time warp” atmosphere around Havana and indeed the whole island, making the Caribbean republic like no other place on earth. So how did this peculiar circumstance come about?

In 1959, Fidel, his brother Raul and Ernesto’s dad led a violent Communist revolution, throwing out the unpopular US-backed Batista government and installing themselves as supreme leaders while “nationalising” all foreign assets. The US responded by imposing harsh trade sanctions, forcing Castro to make pals with the Soviets. When the USSR collapsed 1991, the regime found themselves in a tough corner and the resolve of the people was sorely tested. Fidel resigned in 2008, handing over to his younger brother, Raul. Cuba has struggled on but has relaxed some of its restrictions and the population’s living standing is slowly rising, mainly through tourism. Fidel died in 2016, aged 90.

The result of all this funny business is that Cuba’s progress effectively stopped dead in 1959, leaving the country’s fleet of private cars, trucks and motorcycles the only ones on the road. Some Russian Lada and Moskvich cars were exchanged for the so-called “dessert economy” products of sugar, tobacco and coffee during the Soviet period, but these uninspiring vehicles have not fared so well.

Necessity being the mother of invention, Cubans managed to keep their much-loved US vehicles going with hybrid engine transplants, lashings of body filler and plenty of fairy dust. It’s no myth that the roads are alive with these old classics from the ‘40s and ‘50s, many gleaming in apparent showroom condition used as tourist taxis, while others are just holding on for dear life in sympathy with much of the city’s architecture.

The motorcycles from this era, however, are much harder to find. While I’m told there are still tens of thousands of pre-1960 US cars on the road, there are perhaps just 100 or so Harleys of the same era. Most motorcycles in current use are obscure Russian makes, Chinese things or the once emblematic East German marque, MZ.

The working Harleys are cherished and coddled by their loving owners, called “Harlistas”, and became the subject of the excellent book, Cuban Harleys, Mi Amor, published by Backroad Diaries of Germany. Every February, Cuba holds its own unofficial “Harley Days” (called a “Concentration”) at the resort town of Varadero, 100 clicks to the east of Havana, with prizes bestowed on the best bikes.

In the last few years, the embers of capitalism have been carefully reignited. Private individuals can now earn valuable income (after paying a government licence fee) from renting rooms, driving taxis, operating bars and restaurants, or developing an enterprise with foreign capital like Ernesto has done with his glamorous, Greek-born, business-savvy wife, Maria Elena.

It’s time to ride and our smaller-than-usual contingent is heading out east on an itinerary called “Fuser 1”, a seven-day, six-night excursion from La Havana to Cienfuegos, Trinidad, Santa Clara and Varadero. “Fuser” was Che’s childhood nickname, apparently bestowed on him by his rugby teammates. “Fuser 2” is similar, but eight nights.

After the first day riding around Havana on my allotted MY12 Dyna Switchback, pinching myself and checking out the sights, the significance of the occasion suddenly dawns on me as we gather for customary photographs under a massive, eight-storey likeness of Che on the side of the Ministry of the Interior in Plaza de la Revolución. The legendary man is quite literally everywhere and I imagine young Ernesto feels quite relaxed about cashing in on his father’s image seeing how everyone else in Cuba and many others around the world are already doing just that.

The following day we set out along Route 1, the Soviet-built six-lane freeway that runs almost all the way down the centre of the island. I say almost because somewhere around half way the money ran out and the freeway reverts to a narrow two-lane B-road. But that’s fine and the traffic is typically light. We’re soon wending our way around the few belching 50-year-old trucks, wobbly Soviet-era taxis and modern Chinese vans all going (or trying to go) much faster than they should between crater-sized potholes. Our luggage and mandatory government tour guide and driver follow in the support van.

After some 230km, we stop in the square in Cienfuegos, not far from where the abortive CIA-backed Bay of Pigs invasion took place in 1961. We stroll the historic plaza before setting off on the 80km to the UNESCO-listed city of Trinidad, renowned for its immaculately preserved, 500-year-old colonial architecture. For giggles we motor around the old cobbled streets as the sun sets, drawing curious stares from locals and tourists alike. It’s warm work in the tropical sun, so the beers are welcome at day’s end, as is the music, cigars, rum and sleep.

Next we head due north across the island to the far shore, through villages and hamlets that must have been very similar to when Che and his guerillas marched through the provinces in 1958 on the path to liberation. Roads sweep and undulate through the lush mountains of Parque Natural Topes de Collantes before skirting Santa Clara and its busy rural plains and heading east toward the famous resort district of Cayo Santa María.

The narrow roads around here are used by all manner of transport, from vans and lorries to donkey carts and motorcycles. It’s an interesting, sometimes hair-raising ride through these parts.

The resorts in Cayo Santa María are all the property of the giant Gaviota group, essentially an offshoot of the military and on Trump’s blacklist, but nonetheless provide valuable employment to a great many Cubans. Before arriving at the resort of Melia Las Dunas, we ride across the 50km-long causeway (Pedraplen) that took 10 years to build and was completed in 1999. There are still signs of the comprehensive battering the resort took in last September’s Hurricane Irma, but the clean-up has been remarkably swift.

On our way out — and back across this incredible causeway — we stop at the township of Santa Clara, a place that has become a veritable memorial to Che himself. It was here in the closing days of 1958 that Che and his band of 340 guerrillas, along with sympathetic locals, defeated a force of almost 4000 government troops by derailing their train and capturing and executing their leaders. It was the decisive moment in the revolution and led to the almost immediate collapse of the government.

Santa Clara has preserved the site of the decisive battle by turning the train wreck into a museum and erecting a giant mausoleum to the memory of Che. When the hero of Cuba’s remains were discovered in Bolivia in 1995, along with several of his fellow combatants, they were returned to Cuba and interred in the mausoleum with full military honours in 1997. The tour groups all line up here for obligatory photos with the towering bronze statue of Ernesto’s dad dominating the scene. It’s a macabre irony to be standing here at this sacred place, high-fiving and fist pumping ourselves with the youngest member of that family in the birthplace of his mother and the burial site of his famous father.

With the spirit of that revolution still burning brightly everywhere you look throughout Cuba, it seems a natural undertaking to tour the country effortlessly astride a modern Harley-Davidson, carrying our own flag of revolution as the barriers to the world are slowly dissolved.

Che is quoted as saying: “The revolution is not an apple that falls when it is ripe! You have to make it fall.” And in that spirit, young Ernesto is holding true to his father’s credo by leading from the front and, as part of an eager wave of minor entrepreneurs, forging a new path to the future.

This superb 172-page, hardcover coffee table book is expertly crafted and presented. Fifty mesmerising portraits of dedicated vintage Harley-Davidson owners living in a country isolated by the USA since 1960. 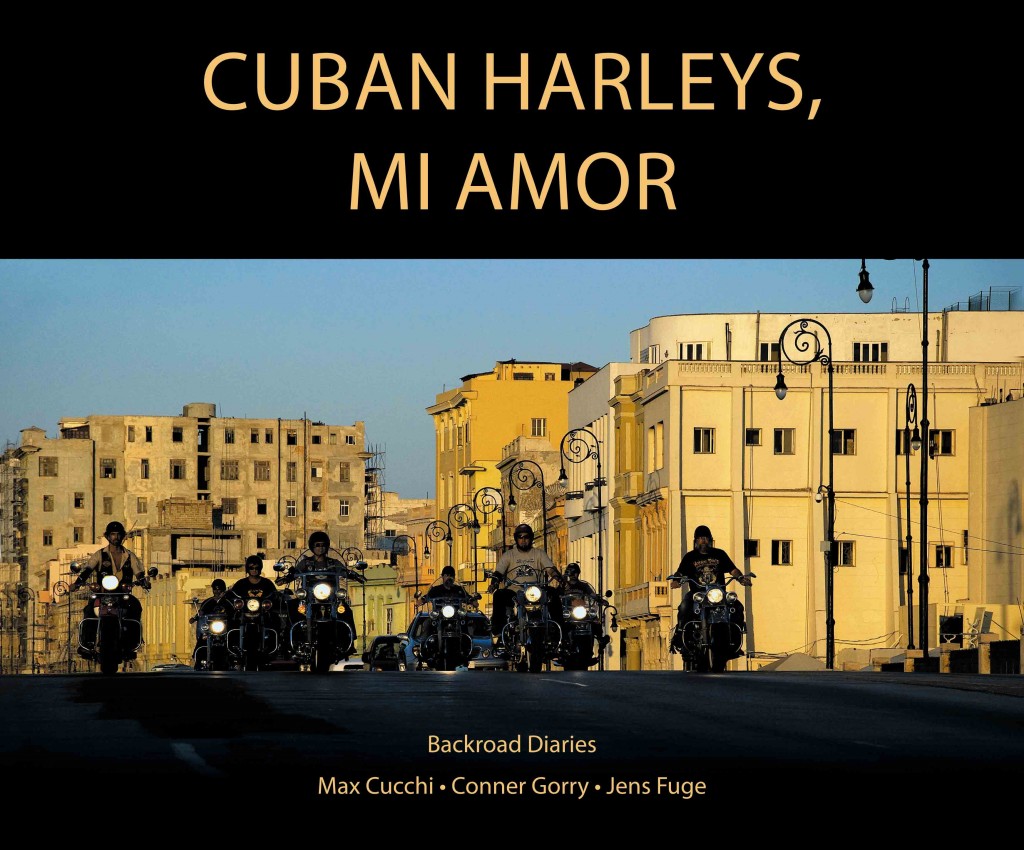 Meet the fabulous ‘Harlistas’ and their unique machines which they keep alive with creativity, ingenuity and love. Yet it is much more than just Harley-Davidsons. It is a snapshot of life in a socialist republic and a story of survival against the odds. Cuban Harleys, Mi Amor features: Jens Fuge, Max Cucchi and Conner Gorry
http://cuba.backroad-diaries.de/english/

Travelling to Cuba is not without its challenges and could easily occupy an entire article, so it is this writer’s strong recommendation to use an experienced and specialised agent.

For details about joining a Harley-Davidson tour with La Poderosa in Cuba, contact Robyn Smith on 1300 853 752 or visit movidas.com.au

Disclaimer: The writer travelled as a guest of La Poderosa Tours, paying his own airfares and supplementary accommodation.

Harley-Davidson, the company that has defined the motorcycle industry for the past 115 years, showcased its next generation of two-wheeled transportation at the Consumer Electronics Show in Las Vegas, unveiling the full product specification, connectivity […]

The new Harley-Davidson® FXDR™ 114 delivers hard-core drag-strip aggression with a technical edge. It’s an unapologetic power cruiser bringing a new level of all-out performance to the Harley-Davidson line-up, combining the unrelenting torque of the […]

Harley-Davidson Museum is a lesson in American history

Words: Roderick Eime If there is a shrine to motorcycling in America, this has to be it. 115 years old this year, the iconic brand tells the story of this great nation. She sits astride […]