Should you replace your helmet after a crash?

If a picture is worth a thousand words then a demonstration must be worth a whole novel. For years I have been telling people to replace their helmets after a crash; now I have seen why that’s necessary. In a very graphic way.

But before I tell you about that, let’s take a bit of a wander around Nolan – you know, the Irish helmet manufacturer.

Yes, of course I know Nolan is Italian. So how did it come by an Irish name? A name, by the way, that is remarkably appropriate for a helmet. It means “chariot fighter” in the original Gaelic. But in this case it was cobbled up from the founder’s name, which was Lander Nocchi. For reasons I don’t entirely understand he reversed the first syllables of his names to make No Lan: Nolan. Whatever the reason, it’s a memorable name and it has become a leading brand of helmet.

And it’s much better than the obvious alternative, Lano. Then again, maybe they could have a budget brand called Woodley. 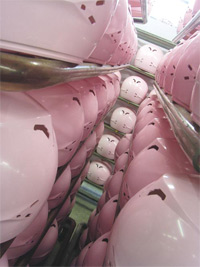 Sr Nocchi wanted to make better but less expensive motorcycle helmets, so in 1971 he bought some injection machines and imported the new wonder material Lexan from the United States. Nolan has never looked back, its success is due in part to the fact that all Nolan helmets and components are made in the small hillside town of Brembate di Sopra near Bergamo.

Nolan’s quality was demonstrated dramatically in 1983 when the front wheel of Wayne Gardner’s bike hit the fallen rider Franco Uncini straight in the head – at race speed. If you remember any motorcycle race crash footage, it’s probably this sickening bit of video.

“I fall, Gardner crashes into me but Nolan saves my life,” said Uncini at the time. “Grazie, Nolan!”

Recently I had the opportunity to see Nolan’s factory – or, in fact, two factories – up close. I’m not going to bore you with the details but I’ll just quickly pass on that Nolan is very proud of the quality and reputation of the helmets. All Nolan products are guaranteed for five years from the date of purchase against any defect arising from materials or the manufacturing process.

“All stages in the production cycle are handled within the company, which in turn has always been driven by consistency, precision and selectivity in production issues – machinery and workforce, as well as materials – and in its quality control systems,” says the company. I’d back that, having seen the care with which parts and compete helmets are treated.

That’s just as well, of course; imagine if it was otherwise.

But the critical thing I saw on my visit and the thing that made the trip to this small northern Italian town well worthwhile, was not so much about manufacturing but about the Nolan test lab.

“Within the company we have a laboratory which is considered qualified by the Italian Ministry of Transport and ensures that regulatory compliance testing is carried out,” says Nolan. “The products are later sent to third-party laboratories for approval. Once approval has been given, line production begins in conjunction with constant and thorough checks on every single component.

“The final product is also tested through destructive tests on random samples to ascertain compliance with international standards.” 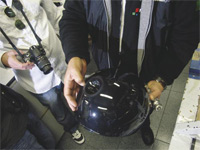 And that’s the thing. The machine that performs the destructive tests by firing a projectile at the helmet was my eye-opener.

A technician showed us what happens to a helmet shell that is hit by the “bullet” from an impressive compressed-air “gun”. It ends up with a huge, deep dent; deep enough, I’d say, to crack any skull inside the helmet. To not put too fine a point on it, anyone wearing the helmet would almost certainly have been dead.

He then showed us the result when a helmet with a proper liner is exposed to the same test. There is a mark on the shell, but no sign of the deep dent. Keep in mind that the liner is on the inside, but the shell shows far less damage on the outside. The liner, of course, was damaged.

Then he put the same helmet – with the damaged liner – back into the gun and fired another projectile at it.

The result was a huge dent pretty much identical to the one suffered by the helmet shell without a liner. In other words, replace your helmet after a crash.