As one of the most populous and financially successful countries in South-East Asia, Vietnam has gone from flat broke when it threw out the Western forces in the 1970s to now providing one of the highest standards of living of any country in the region.

A part of that comes from tourism — the county is beautiful, safe and awesome to ride, which might explain why your
ARR editor has toured there twice. When I was given to opportunity to do an adventure ride on a modern big-bore,
it wasn’t a journey to miss. 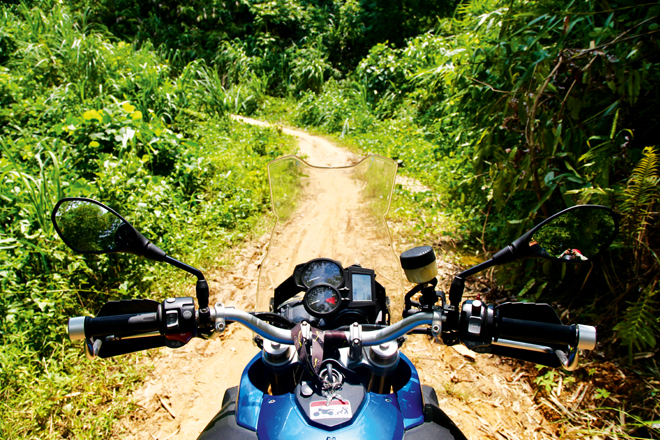 Tuan Nguyen has moved on from the early days of offering Soviet Minsk and Indian Royal Enfields to tourists and now
runs the only tour company we know of in Vietnam offering BMW GS models.

With an 80 per cent import duty on big bikes it was an expensive undertaking, but it means you can ride a bike well suited to the terrain and capable of going places smaller
road bikes can’t. 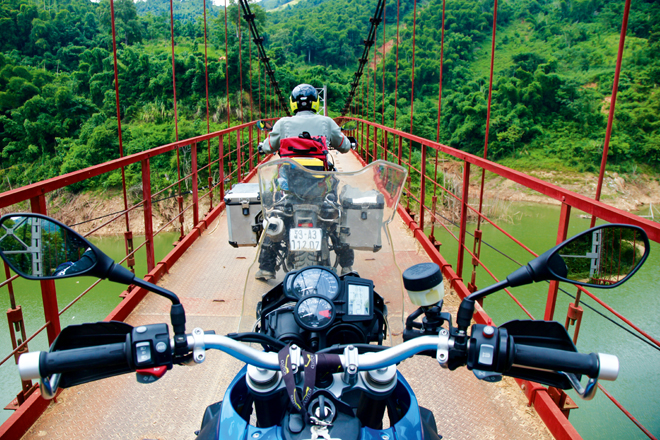 Now, Tuan and I have history. Five years ago, I travelled to Vietnam and rode with him north from the capital Hanoi to Dong Van, a mountainous region bracing the Chinese border
I dubbed Vietnam’s “Hidden Himalayas” in a report for the BBC. It was an incredible adventure and I’d always wanted to return, and recently I did. But for this visit, Tuan plotted an alternative route heading west out of Hanoi to show me parts of the old Ho Chi Minh trail — a network of tracks used to smuggle manpower and supplies to the south during the war. And instead of old Bullets, we went armed to the teeth with the BMW F 800 GS.

THE HEROIN TRAIL
“My father spent six years fighting in those mountains,” says Tuan, pointing at a series of limestone karsts that rise out of the ground like giant chess pieces at a village near the Laotian border. “He lost his hearing for a while from getting caught up in so many bombing raids. Did you know America dropped more bombs on Vietnam than they dropped on both Germany and Japan during WWII?” 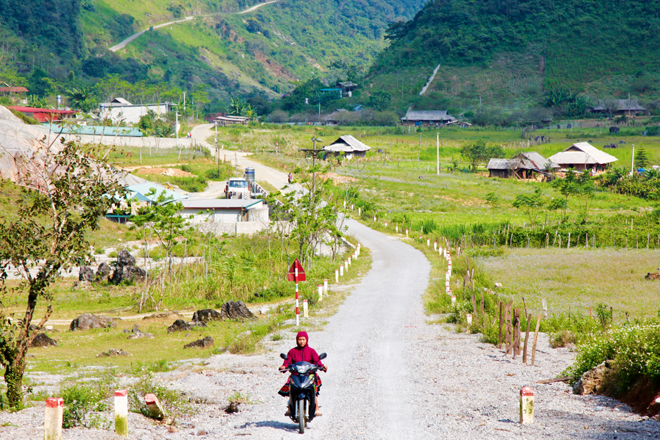 We get an inkling of an idea of the hardship Tuan’s father endured during this service when we hit one of the old access lines to the Ho Chi Minh trail — a 2m-wide walking trail hacked through the jungle. It’s a corruption of rock gardens and deep muddy ruts — and at times skirts deep ravines that leave no room for error. Tackling it is laborious in the 35-degree heat and I lose count of the number of times we get bogged, but it’s nothing our Beemers can’t dig out of.

“During the war the only thing our soldiers had to help them carry things up these mountains were bicycles,” Tuan notes. “They’d load them with up to 500kg of ammunition.”
At midday, we stop at a flyblown town for a couple of bowls of pho — delicious Vietnamese beef noodle soup. The locals are amazed by the size of our bikes and by the nature of our journey. “They say nobody comes here because of the terrible roads,” Tuan translates. “They don’t understand how coming here is our idea of fun.” 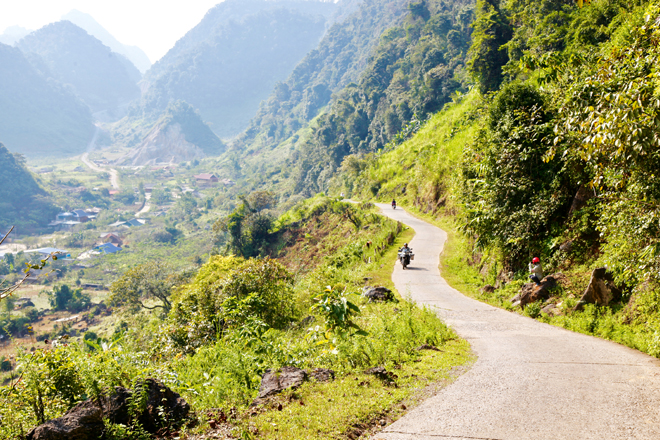 We get more curious looks and comments from locals wherever we go, though one guy in particular makes Tuan a little nervous. “He asked many questions about you. Must be an undercover policeman,” he says, explaining how the Ho Chi Minh Trail is now a major drug-smuggling route from the Golden Triangle — a name coined by the CIA for the cross-border zone that’s one of the largest opium-producing areas on earth. “The police have hidden cameras in many places around here and they play the footage of drug smugglers on the news so the public can help identify them. But the terrain is so complex the police really can’t stop them.”

In the late afternoon, we merge onto a highway — a ribbon of steamrolled perfection that ebbs and flows around streams on an alluvial plain chequered with emerald-green rice paddies. After crawling through the jungle in low gear all day it’s a pleasure to let the throttle out and hear our Beemers purr — despite the large number of trucks on the road.
“Ten years ago, this highway was a dusty road and only a few buses passed by every day,” Tuan says as we knock back a few beets and grilled pork with rice at a roadside stall later in the evening. “It’s brought opportunities for the locals and that’s good. But sometimes I think Vietnam is developing too fast.” 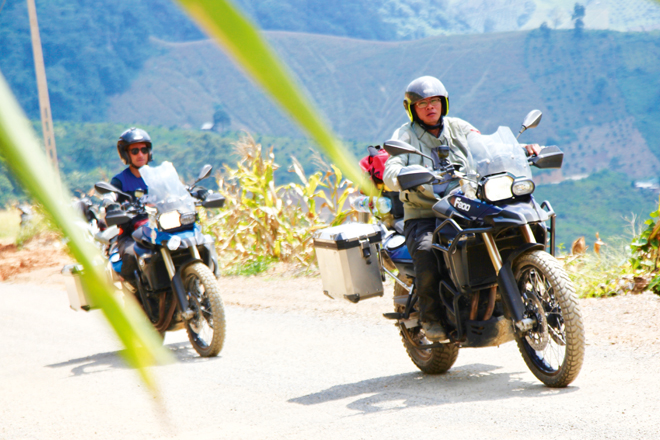 Many of the sealed roads in Vietnam are excellent, which is why the country is a very popular motorcycle tourist destination, even if you’re not planning an adventure trip.
FEEL THE BURN
I’m awoken at 5am by patriotic tunes blaring from public loudspeakers — a hangover from the war. We see a much nastier hangover later that morning at a cafe: a baby with a lopsided skull who’s missing an ear. The deformity, Tuan explains, was likely caused by Agent Orange, a toxic defoliant the Americans used to burn the jungle in Vietnam and to deny guerrillas cover from dreaded B-52 bombers. “Many healthy women in Vietnam today bare children with deformities because Agent Orange is embedded in our genes,” he says.

Motorbikes have a way of making one forget bad things, but as we career between hills that grow larger and take on crazier forms as we veer northwest, I still carry some of the heartache the baby’s mother must feel. We pass cone-like mountains hundreds of metres tall and ridgelines resembling rows of dragons’ teeth. And always in the background are blue-grey ranges, like folds in the hide of a giant who ate half the sky. 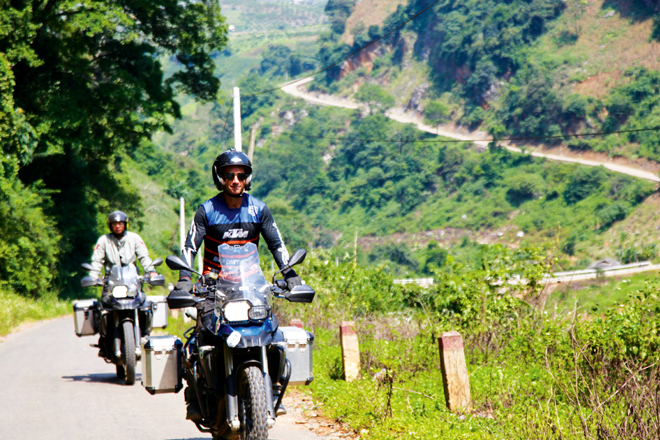 The days melt into each other as we follow zig-zagging mountain roads laden with hundreds of hairpin turns where the asphalt has been ripped to shreds by heavy rains and even heavier vehicles. Every time we approach one we lay on the brakes, drop to second gear, stand up, bend the knees, find the cleanest entry line and muddle through before finding the cleanest exit line. When we stop for breaks we collapse on the dirt while mumbling to ourselves about the sunburn, the cramps, our sore backs and swollen wrists. But overcoming these discomforts is part of the reward — along with shots of potent rice wine and gregarious feasts we are served every evening at quaint little homestays. In Vietnam, there’s no such thing as a light meal. Spring rolls. Crab soup. Barbecued chicken. Fish stew. Roast duck. Vegetables. Rice. Dipping sauces. Spices. Tropical fruit. More rice. More grilled meats. More greens. If there’s any space left on the table, they just bring more.

One evening I’m stumbling around a homestay half drunk in the dark looking for a bathroom when I find a little room full of candles surrounding a framed photo of a Vietnamese man in military fatigues. When I return to the table, our host tells me it is a shrine for his late father who was killed by an American sniper. But to paint the American GIs and Australian diggers who fought alongside them in this war as monsters is to twist the truth. Most were only in their teens, either conscripted or conned by their governments to go to war against the “yellow peril” and nearly 60,000 of them died face down in rice paddies. Some those who survived have actually returned to Vietnam to make peace with their former enemies. “My uncle once met an Australian man travelling through Vietnam who was stationed in Da Nang during the war,” says Tuan. “When they talked they learned they were in a battle together — on opposite sides of course. They hugged and cried together because they realised they could have killed each other. They were so happy to know the other was still alive.” 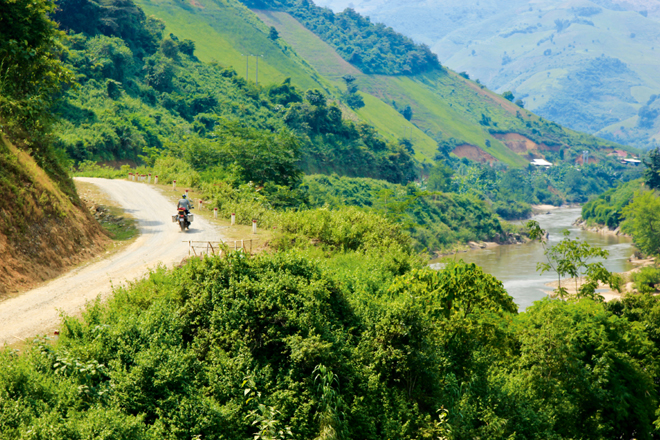 DREAM RUN
Motorbikes let you access remote parts of the world most tourists will never see. They also teach you problem-solving skills because you can’t call the auto club when the shit hits the fan in the bush. Like the day we take a wrong turn into a tea field and hit a dead end. The trail is too thin to pull off a U-turn so we basically have to flip the 300kg motorbikes with our hands. The only way to do so is by leveraging specific parts of our bikes — one of the skills taught at a week-long instructional course at the BMW Motorrad school in Munich that tour leaders must attend to become official partners. But at $25,000 per head, it prices most Vietnamese out of the market. So Tuan learned to do it the hard way — by trial and error.

Another time I forget to switch off my ignition when we stop for lunch and by the time we return, my battery is flat. We solve the problem by stripping back a set of electric cables, connecting Tuan’s good battery to my flat battery and wait an hour or so for it to charge. And when we fall over on the trails we rush to each other’s aid, using brain, not brawn, to pick up our heavy bikes. Independence, mateship, cooperation and self-resilience: these are the key takeaways from adventure riding in Vietnam. 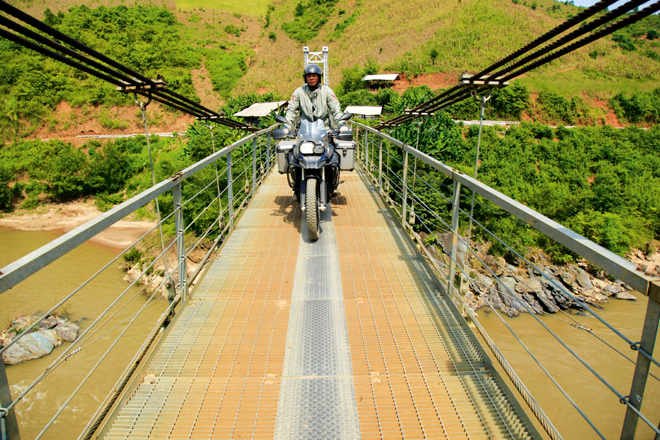 Coming off in the dirt or mud is one thing. Coming off on asphalt is another thing altogether. One day I’m riding behind Tuan through a tight bend when a minibus comes barrelling towards us on a collision course. Tuan just manages to avoid it but I don’t; it clips my panniers and bowls me over. Fortunately, both the motorbike and I emerge unscathed. But an argument erupts between the bus driver and Tuan over who is at fault. Things heat up and the bus driver makes a near-fatal mistake when he pokes my guide in the chest. Tuan is tiny, only five-foot high, but he happens to be a fifth-dan red-belt kung-fu master. He was taught to fight by his father, who was taught by his father who once confronted a group of 12 armed men who broke into his home. Six of the intruders were killed in the melee; the other six laid swords down and begged for forgiveness. But today Tuan decides turns the other cheek. “It would bring shame for me to fight with an ordinary man like him,” he says.

On the second-last day of our tour, we pull over to see the sunset over a wide curve in the Da River. Directly in front of us is a pyramid-shaped karst with spectacular vertical walls and rocky overhangs. To the right and left are staccatos of rice terraces set on impossibly steep hills — marvels of engineering probably dug with shovels and picks. And floating on the water, a mirror of silver and gold, are a few little boats where fishermen cast their nets. It is the most beautiful sight I have seen in my life. 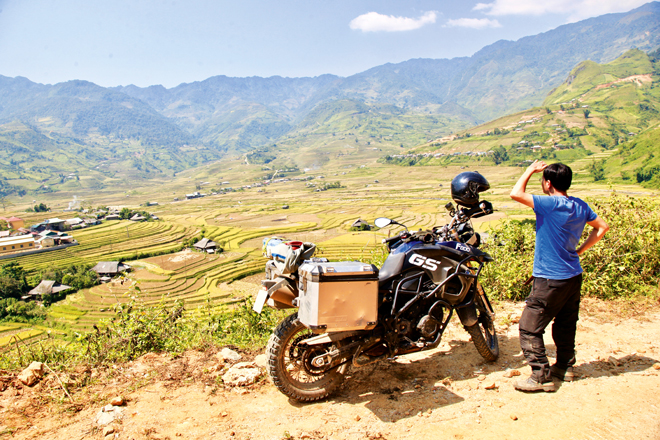 “My dream is to build a luxury eco-resort on this very spot with a swimming pool between the rice fields,” Tuan tells me, though his plans for his touring business are more proletarian. “I don’t care about becoming an official partner of BMW,” he says. “All I care about is bringing adventure riders to Vietnam. Make life a ride. Isn’t that BMW’s motto?” aRr