We head south to test out Triumph’s brand-new offerings

“Yet another Triumph in ARR I can hear you say”. Yes, it’s true that we have featured quite a few in recent time. There’s a very solid reason for that. The Hinckley (the reborn Triumph brand) mob have actually gone berserk lately, releasing no few than 10 new models in the last 12 months. Yep. 10. And the smart word in the corridor suggests more to come.

Triumph is certainly in the game in a big way, recently expanding its Bonneville range, which now covers the new T120 and T120 Black, the Street Twin, the Thruxton 1200 and Thruxton 1200 R, the Street Scrambler and the Bobber. Now you can toss in the T100, T100 Black and the Street Cup. 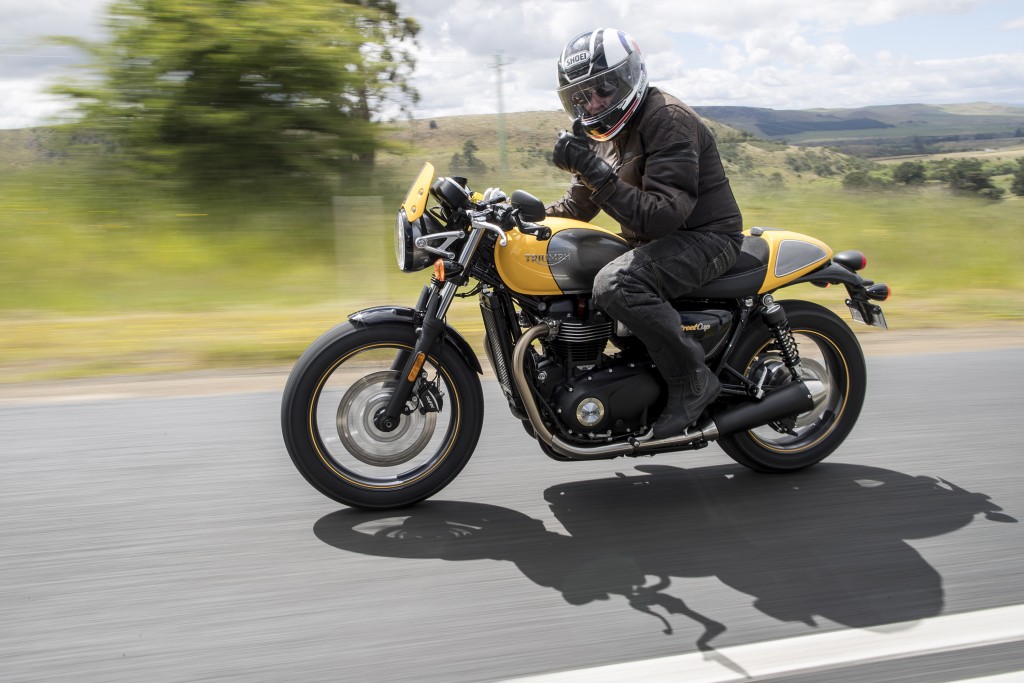 In keeping with Triumph Australia’s penchant for extravagance when it comes to launching product, we headed to the Apple Isle for four days of touring on the new bikes. Yep, we were gonna find out if these things are any good or not. Tassie does that. You simply can’t hide from Tassie’s revealing blacktop.

What Tassie offers is fabbo roads, good monger and a whole bunch of stuff to see and do, all in a compact island of just 68,401km². The place is bike-touring nirvana, and I ain’t talking the Cobain kind.

The plan was to do a full lap of the historic southern island, taking in just about any type of running that the new bikes may encounter. Along the way, we could marvel at the majesty of the scenery and eat, drink and be oh-so merry, visiting the sights as well. Brilliant, but a real-world, hard test of the new machinery. Triumph is to be congratulated here. It takes a bunch of confidence in its product to subject brand-new, just-off-the-line bikes to such an environment. In fact, truth is, I wondered prior to setting off at the wisdom of such a plan.

The whole deal got underway from Bridport in the north of the state aboard the T100 and T100 Black, down the east coast to Bicheno via St Mary’s Pass and Elephant Pass, before overnighting in the magnificently pristine Freycinet National Park. Having driven a couple of Targa Tasmanias in the past, I recognised some of the roads, with Elephant Pass representing one of the most challenging strips of blacktop on the planet. Narrow, rough and with absolutely no shoulder to the Armco, it’s a highlight if you are down that way. Just bring your brain. They are not going to find you if it goes wrong. 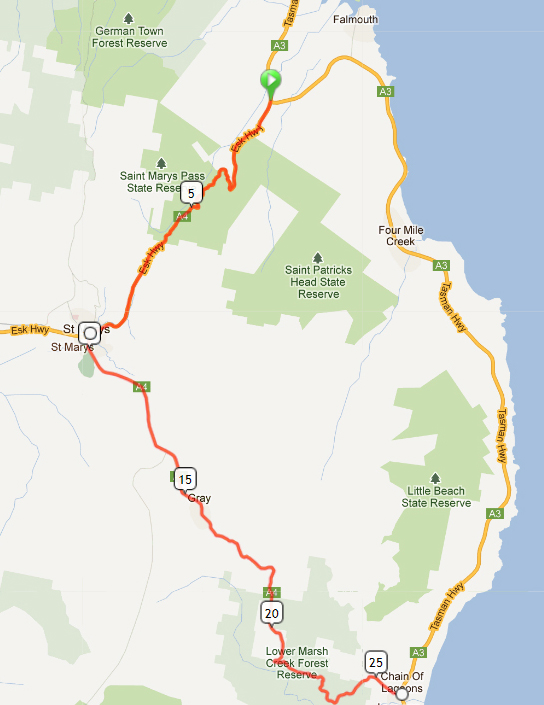 Day two took us to Hobart taking in Lake Leake road, before heading north-west. Another stop in sleepy Strachan was followed by a very spirited journey to the incredibly beautiful Cradle Mountain, which was shrouded in sopping cloud, offering live Lord of the Rings cinematics to the throngs of chattering tourists milling about, like so many mice. We worked our way through that.

After that, we blasted back into Launceston. There we shook ourselves, took in a wistful moment of introspection and thought, “Jeez, what happened there?” It was intense, with one day of pretty putrid weather, run at a fair clip with no quarter given or expected. A real-world, full-on 1100km launch test. Just like the old days. As a result, I feel well qualified to appraise both bikes. Well done Triumph.

So, that’s the route. Let’s look at the steeds.

The T100 represents the entry point for the Bonneville family. In Triumph-speak, the T100 offers an option that is “now even more accessible, lighter and more manageable.” All that is true, but I reckon the whole point is centred on bringing to market a cheaper choice to the more accomplished and powerful T120.

Fact is, the T100 comes in with a full $2690 price shave over the T120, and that’s gonna be the pull on this bike. It’s more basic for that, but it gives a good budget showroom head puller for Triumph and it needs that to bring conquest buyers to the brand. 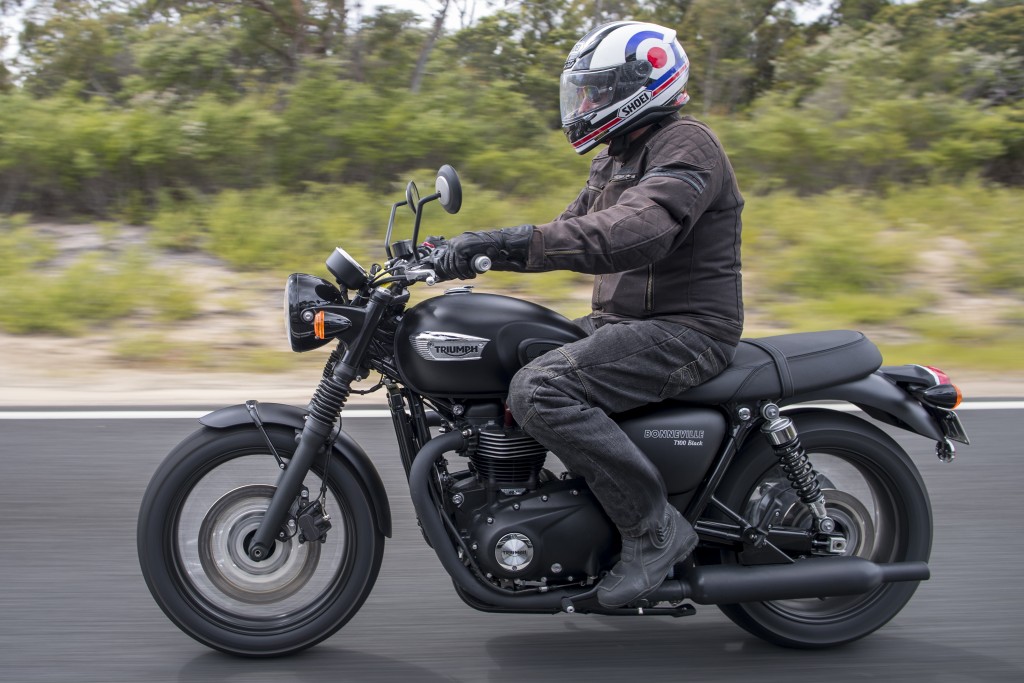 Slotted into the frame is the new 900cc high torque engine. The big news here is liquid-cooling, which gets it nicely through Euro 4 emissions constraints. The radiator is small and well hidden, which is again a plus. Big pipes and clamps are pig ugly and the bike doesn’t suffer aesthetically for now, being a drinker.

The engine is well suited to both bikes. There’s nice power off the bottom and it all delivers a rider-friendly surge of useable grunt. It’s not mind-blowing and it all tops out at around seven grand through the gears and 180kmh in top, but that’s plenty and no one is going to reasonably need more.

The three models on test come with pretty tricky techo stuff such as traction control, ABS and a torque-assist clutch.

The T100 Black offers silhouette-styled level with just about everything that can be, blacked out. All that costs a premium of $200 more than the standard job. The platforms are the same bar that.

Further touches include an LED taillight, an engine immobiliser and a USB charging port. I used to scoff at stuff like that, but no more. They’re good to have.

Braking is alright, with the ABS a reassuring factor. The single 310mm front disc and 255mm job at the stern haul the bike up with stability, but nothing ground-breaking is happening there. The stoppers are suited to the bike, that’s about the size of it.

The six-speed box snicks up through its range as you would have it, no glitches or falsies were found on the test. Ratios exploit the power on hand nicely, with the compromise of long legs and zip met with intelligent reaction. 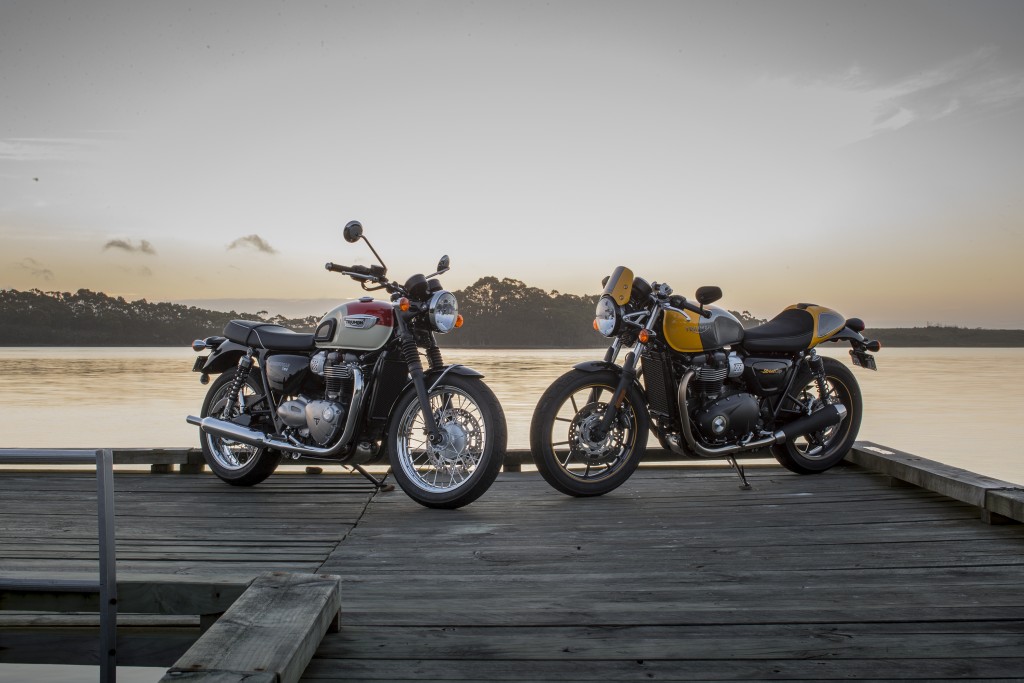 The Street Cup gets the same tank as the Street Twin, but with a bullet seat and new seat cowl. I love the dropped Ace-style bars and the bike also uses longer shocks. This certainly changes the stance of the Street Cup, putting the rider higher and further back, with the handlebars actually positioned lower and further forward.

The Street Cup emerged quickly as a favourite for me. The T100s offer a traditional seating position, comfortable, but a bit “sit up and beg” for my preference. I’ve always been a fan of the cafe racer, well before the tide of international hipster-ruckus cascaded into barber shops the world over. The position suits my frame and style of riding perfectly. And the Street Cup won me from the get-go, on ergos, looks and character. Where the T100 came off as a little ho-hum, the Street Cup lit a wick that still burns. 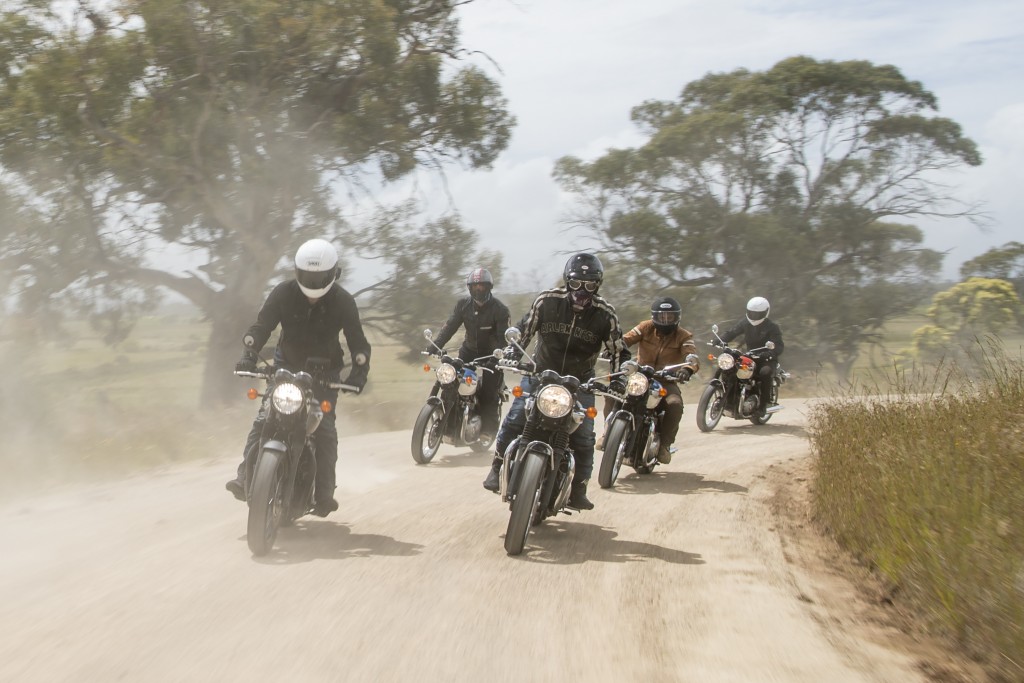 Other changes are small, though the Street Cup does borrow the foot pegs and twin gauges from the Thruxton, plus comes equipped with new Nissin calipers. In a move that is likely to take hold in other models, this is the first Triumph you’ll be able to get Fox shocks, fully factory licensed I might add, through Triumph’s accessory catalogue. Nice. A very good synergy.

But wait, there’s more… There’s 120 add-on bits for the Street Cup along with a whole bunch for the T100s. That’s an incredible catalogue of accessories right there. Given the fact that the cafe style is oh-so-popular globally at the moment demands a bit of individuality right off the bat. This is a big drawcard for the bike.

All this amounts to get a pretty big tick for me. While the T100s use minimalism as a calling card, there is still some handy electric stuff that works in the bike’s favour, fitted as standard. It’s finished well and handles well enough to deal with the modest but clever power band on offer.

The shadowy Black will find a niche. It smacks of street style and sinister minimalism. Many will find that allure too much to resist. Look for these outside your trendiest baguette provedore’s premises in all the big cities. It will work in the market, I’m sure of that.

But, drumroll here please… The Street Cup is a delight. It looks like Audrey Hepburn in Sabrina, handles like a very well-sorted street racer and can be pushed wonderfully hard, due to those lovely ergos. It’s a flippin’ treat and I’d have one in a flash. I have an illness for old Brit parallel twins, I have to admit, having owned Nortons over the last years and this evokes all that stuff for me. Without the spanner time, oily garage floor and frustration. Loved it.

Over to you lot. 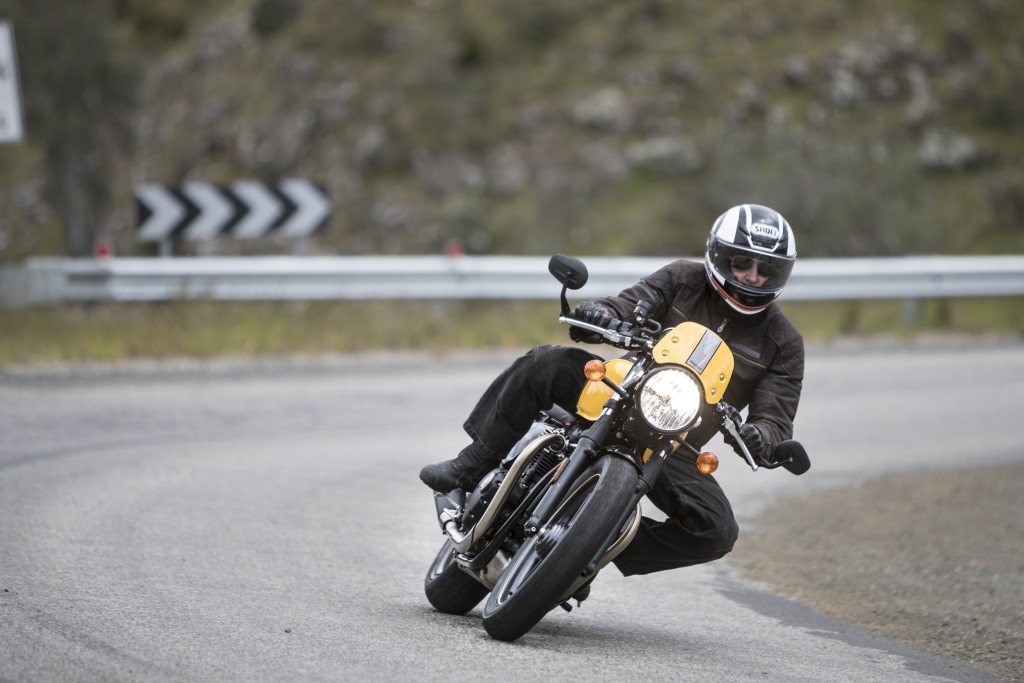 May 27, 2018 a Road Rider contributor Bike, News Comments Off

Look out BMW! Triumph has thrown down the Adventure gauntlet, with the 800 and 1200 Adventure tackle getting the full treatment. Brian Rix attended the launch this week and will have a full ride report […]

Triumph Australia gears up for this year’s RAT rally After a successful 2016 event in Jindabyne, Triumph has organised its next annual rally at the Hahndorf Resort in the Adelaide Hills. To be held from […]