There comes a time in the Top End when we try to make the most of the cooler (relatively) dry season weather. The weather tends to be humid, but inland the air dries out considerably and the nights are cooler than on the coast. I find the dry heat of the inland is easier to take than the humidity, though one needs plenty of water to keep hydrated. Camelbacks are great if you have one and lip balm should be used regularly to keep the lips from drying out as you head inland. I chose the coolest and driest few days of the season to get away from the humidity and to give the Kawasaki W650 a good run. As I headed out of Darwin I still wasn’t sure where I was going to go.

Don’t you just love that freedom – where shall I go? Hell I don’t know, just go!

I was invited by three riders at Adelaide River Township, 110km from Darwin, to ride with them to Mataranka. I declined with thanks, as Mataranka at 430 kilometres from Darwin was not far enough for my liking.

Instead I decided to follow the Sage’s classic advice to “go west young man”. Being a Ulyssian, the “young” epithet was discarded, but I took the advice anyway and at Katherine turned right for Kununurra in Western Australia. 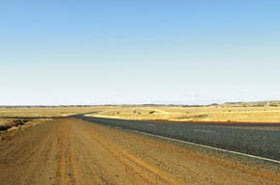 The ride was enjoyable, the weather being cool enough to wear my leathers without feeling as though I was in a sauna. From Darwin it is an 825km ride to Kununurra. If you are coming from Perth it is considerably further, about 3200km. That turnoff at Katherine took me down the Victoria Highway, which some years ago was widened and is a much safer ride than it used to be. Although the straights are long, as one approaches the Gregory National Park there are a few interesting twists and turns with dips and rises. Unfortunately they are nothing for an enthusiastic sports bike rider to get excited about, and anyway the spectacular scenery is worth riding at cruiser speeds (90–100km/h) just to look around as you approach the Victoria River crossing. During the last wet season, water flowed over instead of under the bridge crossing the Victoria River several times. Normally the water level is about 10 metres below the bridge.

Incidentally, this is a convenient spot to refuel as some bikes may be approaching the limit of their fuel tanks. Victoria River roadhouse and crossing is 200 kilometres from Katherine and fuel is cheaper than the next refuelling opportunity at Timber Creek, some 93 kilometres further on. Timber Creek to Kununurra is a further 227km.

After re-fuelling man and beast, I continued through the very photogenic scenery of the Gregory National Park. The temperature had dropped to about 20 degrees by the time I reached Timber Creek. I set up camp in the camping ground just as the sun sank behind the flat-topped hills that are rather reminiscent of western movies.

Rising bright and early at just after 8.30am, the morning was a bright cool 12 degrees and after a breakfast of burnt sausages, burnt toast and a strong cup of (you guessed it) burnt coffee, I left my tent set up in the camping area and turned right onto the Victoria Highway once again for the ride to Kununurra.

Here’s WA
Crossing the border into West Australia there is a quarantine check point, so if you are carrying any fruit or vegie snacks they will have to be eaten on the Territory side of the border or be forfeited. Coming into the Territory from Western Australia no such restriction applies.

My plan for the day was to re-familiarise myself with Kununurra, then to head off to see how much Wyndham had changed, as it was only another 100km further on a good wide road. Though I often pass through Kununurra it had been about 10 years since I had been to Wyndham work seldom allows me the luxury of a diversion to play tourist. After a decent coffee “fix” in Kununurra I had a ride around town.

Irrigation farming on a massive scale including sugar, bananas sandalwood and melons is the reason for existence of the area. Tourism plays an important part in the economy of Kununurra, with the lake and diversion dam featuring as a major source of interest and relaxation. Fishing, swimming, water-skiing, boating and floatplane tours are just some of the activities enjoyed by visitors and locals alike. Should you want to ride into the Bungle-Bungles (the Purnululu National Park), the turnoff is some 250kms from Kununurra and you will need an adventure-tourer or off-road bike for the rough track. 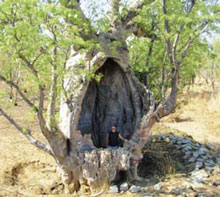 The Ord River scheme offers mind-numbing figures. For example, before the dams were built, Sydney’s entire daily water usage would flow past in the Ord River every 30 seconds. With the main dam completed, Lake Argyle holds 35 times the capacity of Sydney Harbour. Sixty three per cent of the water passing through both dams is washed into the sea and one wonders why we are not piping water all over Australia. The year-round supply of unlimited water attracts huge bird populations and enriches the flora and fauna of the area. Okay, this is supposed to be about motorcycle touring, but the figures are fascinating.

Wyndham is in two parts, Wyndham Town near the airport and the older Wyndham Port. As you enter Wyndham Town, it is well worth the detour to the Five Rivers Lookout. The steep twisting potholed bitumen road offers spectacular photo opportunities, especially from the summit of the Bastion where one can see literally hundreds of square kilometres of mud flats at low tide. When these are exposed to the tropical midday sun, they absorb considerable heat that is transferred to the tidal waters as they flood the flats. The result is a town surrounded by warm water, which adds to the steamy humidity of the area.

The port township is an historic place and has served the Kimberly area from the 1800s. Many of the old galvanized iron shops still line the one wide and often empty main street of Wyndham Port.

First impressions of abandonment and decay add to the far-flung outpost feel of the place. The main street and port infrastructure are squeezed between the rather impressive table-top Bastion Range that towers 1200 feet above the town, and the waters of the West Arm of Cambridge Gulf.

Until the early 1980s a large meatworks was active in the old port, but this no longer exists. The Wyndham jail was closed at about the same time.
Conditions in the facility were basic, to say the least, with the heat and humidity adding to the discomfort of the staff and inmates. During my visit, however, the dry season mid-afternoon temperature was a comfortable 29 degrees. Wyndham Town and Wyndham Port have a population of about 1000.

Wyndham Port almost died in the early ‘80s but tourism, crops from the Ord River agricultural scheme and mining have seen its fortunes refreshed. It is not enough to modernise or destroy the historical aesthetics of either the Town or the Port which probably accounts for the rugged, casual unspoilt look of the place. As far as tourism goes, Wyndham appears to be a day tripper destination, but a definite must if you are in the Kimberly Region.

Going back
The road between Kununurra and Wyndham is smooth and wide, the scenery typically rocky and rugged and covered in spiky spinifex. Trees are rather sparse, except where creeks and floodways supply moisture to sustain growth. A diversion to the Grotto is well worth the effort. This is a deep narrow gorge that lies at the foot of a waterfall – during the wet season. Steps have been conveniently cut and laid to assist the descent down to the pool at the bottom of the gorge.

Riding back to Timber Creek on Saturday afternoon I recalled a conversation with a chap from Zimbabwe who could not get over how much like his own country the scenery was throughout this region. There is a lot of low thorny acacia shrubbery growing in patches everywhere and boab trees are common. No doubt my Zimbabwean acquaintance might have been forgiven for expecting to see wildebeest or zebra grazing on the open plains.

What you will see when travelling the unfenced roads of the outback are cattle, roos and donkeys charging onto the road when you least expect them. The light grey Brahman cattle blend well with the road. If you must travel at night in the Territory (or the outback areas of Queensland and West Australia), don’t be surprised to find cattle and animals lying on the road, especially in the cooler months. Any experienced cattleman or bushman will tell you they are seeking the residual warmth of the day’s sun.

As the sun set, I arrived back at my Timber Creek campsite. Timber Creek was/is a police and mission health clinic outpost of historical significance, and is a base for other various government outfits as well, including roads, parks and wildlife, agriculture etc. The old police station and Australian Inland Mission hospital still stand and are heritage listed.

Timber Creek is on the dreaded Victoria River, home to crocodiles, sawfish-sharks and lots of other beasties from the sea and is about the limit of the saltwater tidal effect of the river. Fishermen won’t go hungry as barramundi and many other species abound. Several motorcyclists who passed me during the trip had fishing gear on their bikes.

The Kimberly region is unique, accessible and friendly. If you think it’s a hell of a long way, it’s time you broke out of the commuter-day tripper mould. After all, that’s why you bought a copy of Australian Road Rider, isn’t it? Until you have done such a ride, you haven’t experienced what touring is all about!

Travel tips
Best time to go: April through to September.
Clothing: Don’t forget, from Perth you will be passing through a wide climate range, experiencing southern winter, arid regions and tropical regions. Deserts can be hot in the day and freezing at night.
What to take: Tyre repair kit, camping gear, sunscreen, moisturiser and a Camelback. See The Bear’s comprehensive list in his Australia Motorcycle Atlas.
Camping: Allow plenty of daylight to set up camp and find firewood if fires are allowed or desirable. You might find you’ve set up your lightweight tent on a bull ant nest in the dark!