If you’re old enough to remember the cartoons of Ken Maynard, you’ll find the ambience of The Leap Hotel very familiar. Known these days mainly by the Walt Disney-ised and prefabricated “Ettamogah” pubs spread around Australia like myxomatosed rabbits around a paddock, the cartoons celebrated a harmless and friendly outback that centred, always, on the pub. And what a pub it was – ramshackle, the walls hung with rabbit traps and the regulars ever ready to share a pot (or a middy) with the amazed visitor.

There are not many pubs like this left and the few that you’ll find are usually carefully designed and manufactured imitations – our equivalent of the Irish pub found all around the world.

The pub at The Leap, a few kilometres north of Mackay, on the other hand looks pretty much like the real thing. Sitting snugly just off the highway under a great stone knob of a hill called Mt Mandarana by the settlers, it’s hard to miss: the sign on top is almost as big as the pub itself. 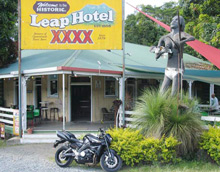 It also has an excruciatingly bad and badly weathered statue of an Aboriginal woman outside and, of course, thereby hangs a tale – in fact, the tale of how the place got its unusual name.

“North of Farleigh on the Bruce Highway is The Leap township and home of the legend of The Leap,” says the Mackay City Council history. “A site that echoes of great tragedy that lives on from days long past; the best place to hear the yarn is at the character-filled Leap Hotel.

“Pull up a stool, check out the mini-museum of pioneer memorabilia and order a cold pint of beer to be washed down with hearty pub tucker. What you’ll get thrown in for free is laid-back Aussie hospitality and a lesson in local history that’ll have you looking up when you leave.”

Looking up at the sheer hill behind the pub, we should note, not the heavens.

“As legend has it, in 1867 settlers decided they’d had enough of local Aborigines spearing their cattle for food. One raid in particular caused so much consternation among the farmers that matters came to a head and police got involved.”

Of course in those days the Queensland police had not yet developed the outstanding reputation for fairness and even-handedness in their dealings with Aboriginal people that they enjoy today.

“The troopers tracked the natives to the top of the mountain that looms where the hotel stands today,” says the history. “From high up near the clouds, a tribeswoman named Kowaha reportedly hurled herself from the sheer cliff face, rather than surrender to authorities. With her baby in her embrace, she leapt from Mt Mandarana and fell to her death far, far below.

“Incredible as it may seem, the baby girl survived her and was taken into care by the wife of a trooper. The Leap Baby, as she came to be known, remained in the district until her death in 1928.

“Since that fateful day of confrontation the area has become known simply as ‘The Leap’, a place where visitors come to learn of and ponder about the mysteries surrounding events in Mackay’s heart-rending past.”

And sip on a coldie while they’re doing it, which is a very civilized way to ponder the mysteries of anywhere’s heart-rending past when you think about it. The pub is popular with local Harley riders and appeared to have six beers on tap, which is excellent. Service was good and the beer fresh and cold.

So why not take The Leap yourself if you’re in the area?

(Our thanks to Mackay City Council for the background information.)