Taking the back way on Honda’s Dakar-style lightweight

Believe it or not, of all the great bikes to come out in 2017, this is one of the ones I was most excited about riding. The reason for that was completely superficial. I thought it looked awesome.

Many of you guys will remember that great period of time in the late 1980s and early 90s, when big-bore Dakar Rally machines were made available to the public in road-going guises. Motorcycles such as the original Honda Africa Twin, Yamaha’s Super Ténéré and the gorgeous R/80 G/S Paris Dakar from BMW.

Those big off-road beasts were soon replaced by smaller capacity endurance bikes at the Dakar Rally, and in-turn new production versions disappeared from our roads.

The new Honda Rally reminds me of those sleek monsters that grace the sands of West Africa each year, so it had me intrigued. Pull back the covers though, and the Rally is little more than Honda’s CRF250L/LA with some tuning adjustments and a cool-as-hell fairing. But that’s not necessarily a bad thing. 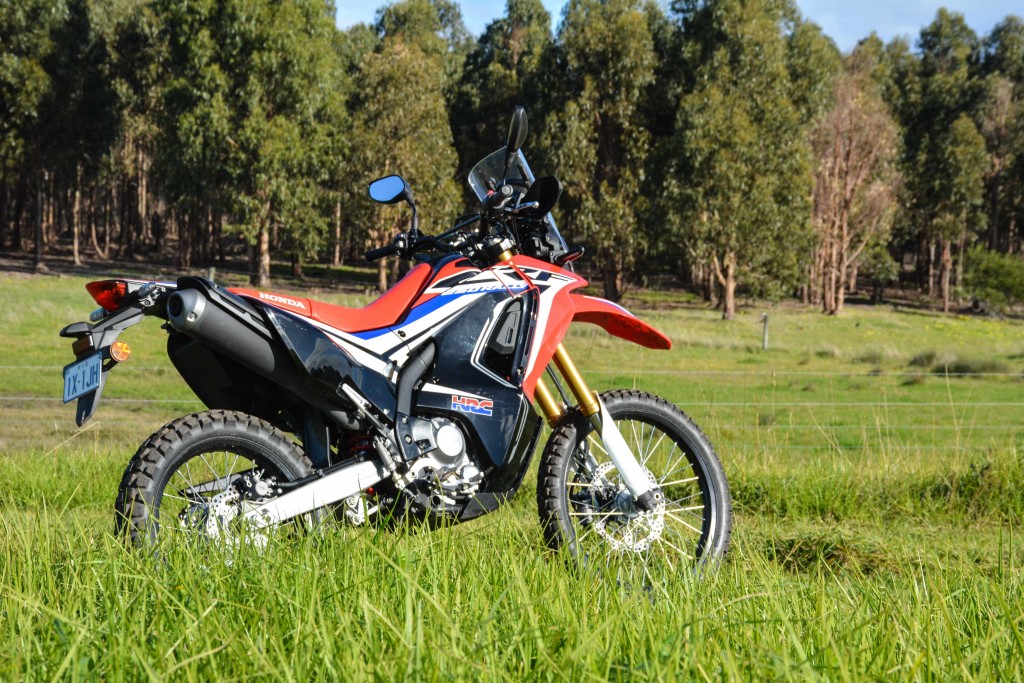 The bike is well priced ($7299 + ORC) and well specced for its class. On the tarmac it performs strongly for a bike that is at its core, really just a road-legal dirtbike. On the trails however, the Rally really shines.

The 250cc engine is a single-cylinder, liquid-cooled, DOHC, four-valve EFI motor. It’s good for just over 18kW of power and 22.6Nm of torque. That’s not a whole lot of grunt when compared to its motocross-focused siblings, but the power delivery is smooth and very useable both on and off the road. 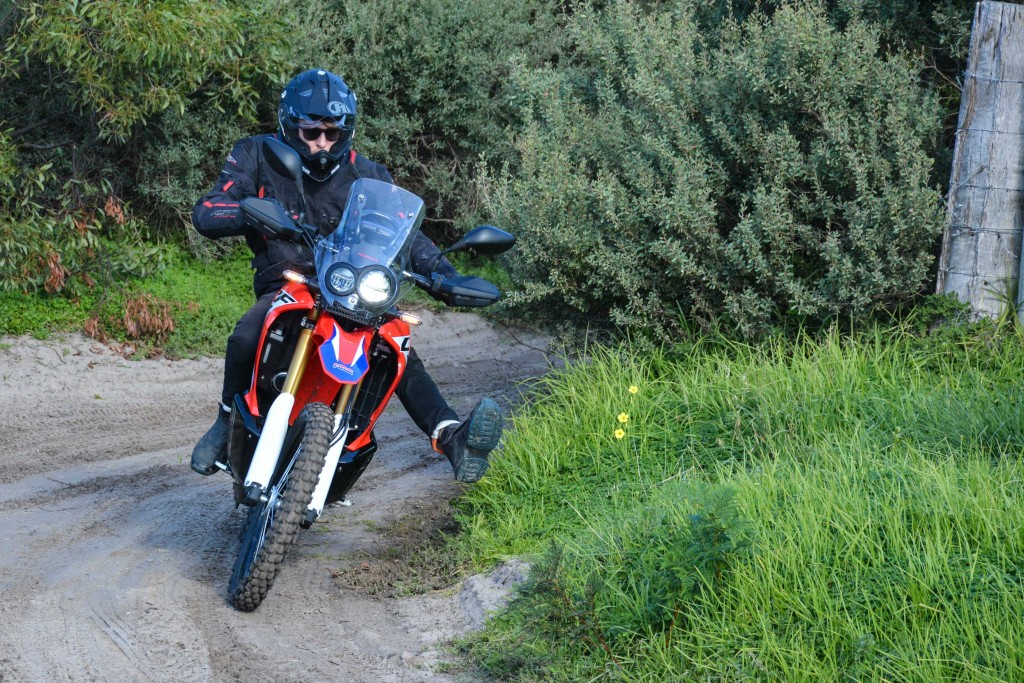 Twist the throttle and your arms won’t be ripped from their sockets, but there’s plenty enough to lift the front wheel over obstacles and keep up with traffic.

Up front we have a 43mm Showa fork with 250mm of travel. The same is featured on the standard L models, but the rally gets an extra 50mm overall length and specific spring rate and damping. Managing the rear is a ProLink single shock which allows 265mm of travel, 25mm more than the L models.

The suspension is a real stand out feature on the Rally, which allowed me to throw the bike into sandy corners with the same confidence that I can a fully-fledged MXer. 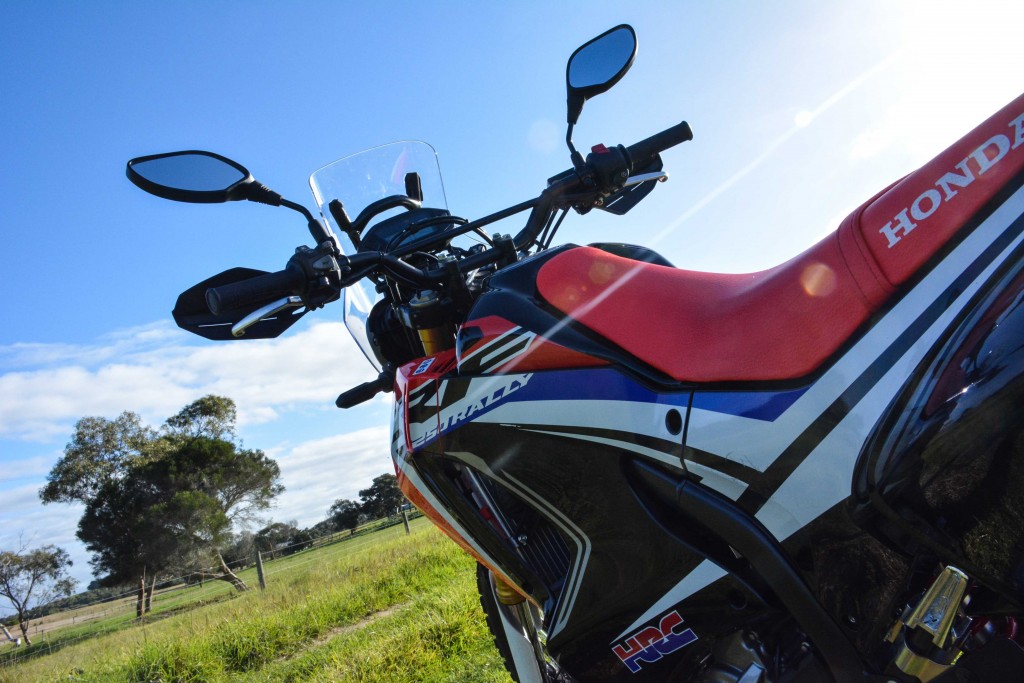 While there is an ABS-less model overseas, all Australian Rallys come standard with ABS. Fortunately it can be switched off at the rear wheel via a button beside the dash.

You also get a steering lock, rear helmet lock, luggage strap points and a digital screen showing all your usual readouts.

When pushing the Rally hard off-road, the bike demands you make good use of the throttle and gearbox. This is a 157kg motorcycle after all. The six-speed transmission ratios are set to allow highway cruising, but the lower gears provide good acceleration off the bottom. 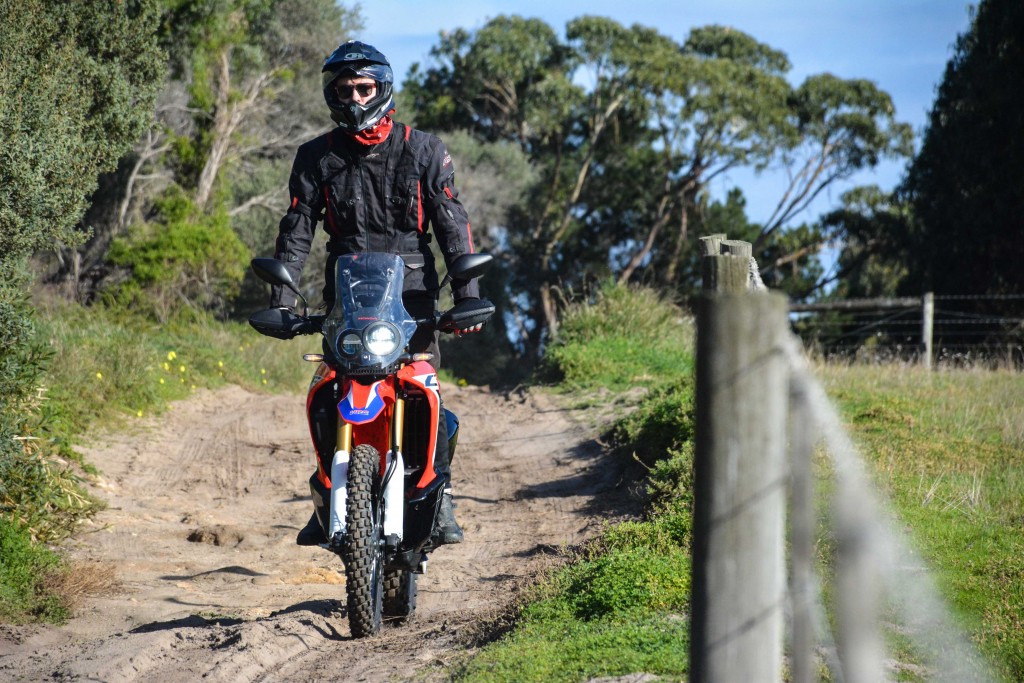 You feel tall on the bike, and visibility is superb. The clear visor does well to disperse the wind at speed and the seating position is a good mix between a trailbike and an adventure style posture.

Having only spent an afternoon with the CRF250L Rally, I can’t give a comprehensive verdict. But I was certainly impressed by its performance and versatility off-road. Put a 450 in it Honda, and I’ll be all over it.

Ducati discovers true refinement without losing its mojo Ducati’s Multistrada made its mark in 2010. Released in 2003, previous models were a hard-nosed, uncompromising, love child of a motard and a sports-tourer. They competed with […]