The age-old game of, “If you could only have one bike in your garage to do everything what would it be?” is something I’m sure we’ve all played over a few beers in the past. Well I have some bad news for you if you fancy playing it again: I think we have the answer.

To be frank, I wasn’t expecting the Tiger Sport, with its wider ‘bars and bouncier suspension, to be much more than a softer and more comfortable Speed Triple, sharing as they do the same engine and frame, but its ability to be all things to all-men, namely commuter, tourer and sportsbike, really took me by surprise. In addition, this is the first bike in ages I’ve sat on and immediately felt like I owned it. The seating position, the way it carries its weight and the ergonomics felt so bang-on, it was like I’d had one for years. 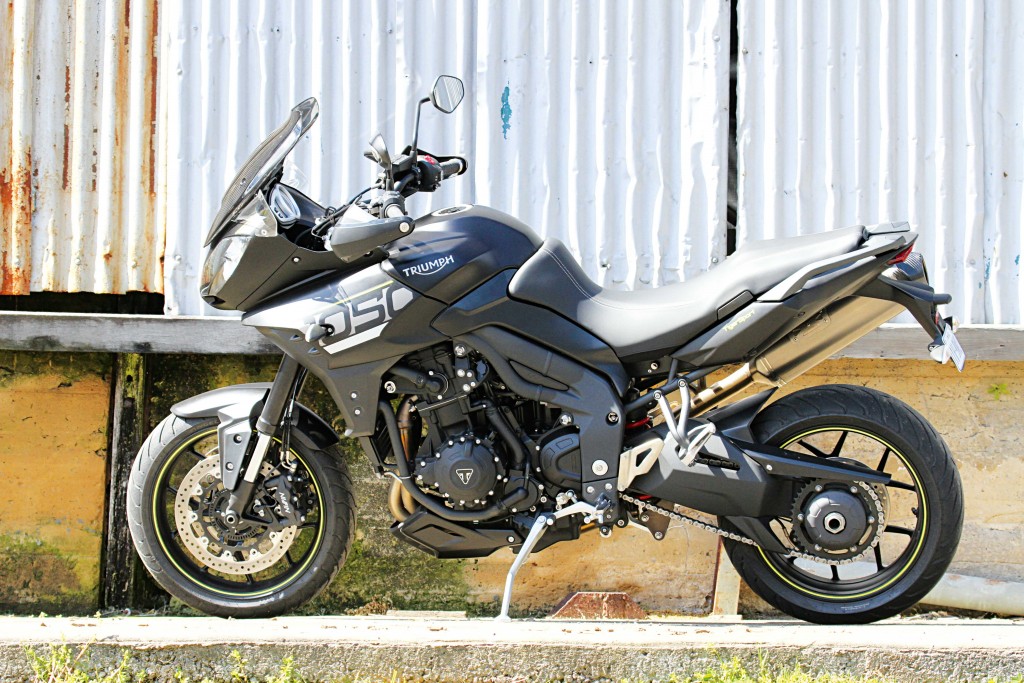 For 2016 the Tiger Sport now features the same updated 1050cc motor (albeit with a softer tune) as the latest Speed Triple, which has more than 100 modifications as well as a fully ride-by-wire throttle and associated multi-map rider modes. Compared to the outgoing model, the new Tiger makes slightly more power and torque but with a fuller curve for both, particularly in the mid-range which, if you’re in a relaxed frame of mind, makes this a lazy man’s engine.

For the first few days I was thinking the bike felt a bit underpowered until I realised I was riding everywhere in sixth gear. The engine is so smooth and the fuelling so good that without thinking about it, I was just clicking through the ‘box until I ran out of cogs, and this on my daily urban commute. What’s more, exactly like the Speed Triple, once you get out of town and into some bendy stuff, just leave it in one of the middle gears and simply surf up and down the tacho. See, lazy. However, after a somewhat tense conversation with a nice man driving a car with a snazzy light-up roof-rack, I was reminded not to confuse lazy with slow. 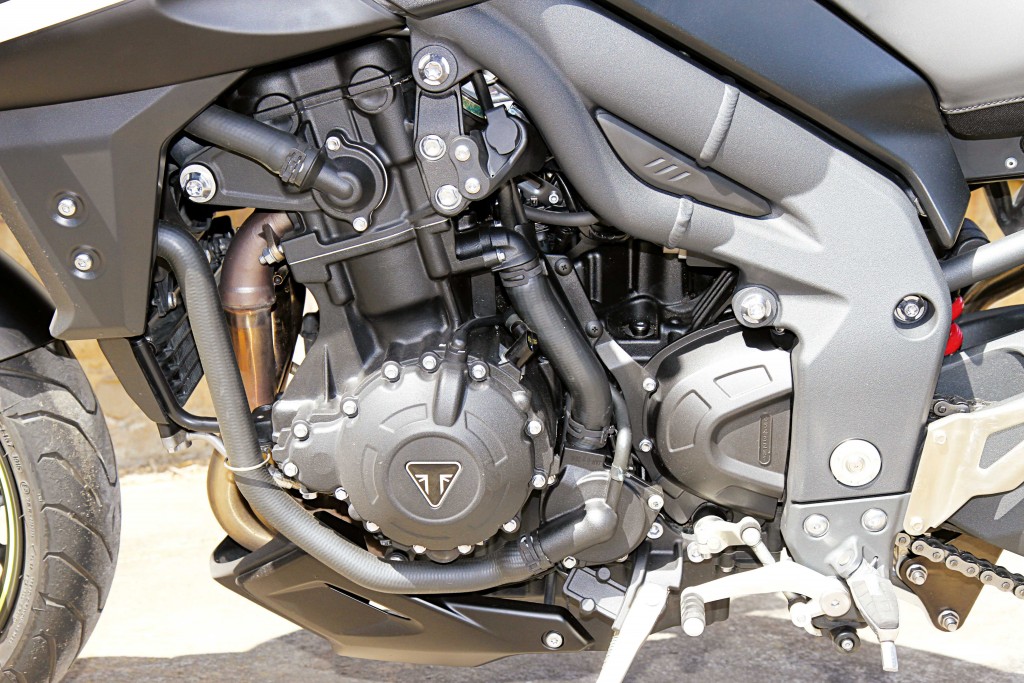 Hand-in-hand with the ride-by-wire technology comes map-specific throttle response, power output and traction control. The three modes in order of fun are predictably Rain, Road and Sport. Rain mode limits the power to 100hp, makes the throttle feel like Play-Doh and has very intrusive traction control — ideal for when it’s really slippy but not much else. The other two maps give full power, the same traction control and an increasingly direct throttle response. Fuelling is beyond reproach in any mode but the let-down is you can’t switch between them from the handlebar despite a plethora of switches at your fingertips (six on the left switch-block and five on the right). Rather, you have to use the big “M” button on the dash itself, requiring you to take a hand off the ‘bars and your eyes off the road. Best bet is to stick to Sport mode and just get on with riding the thing. 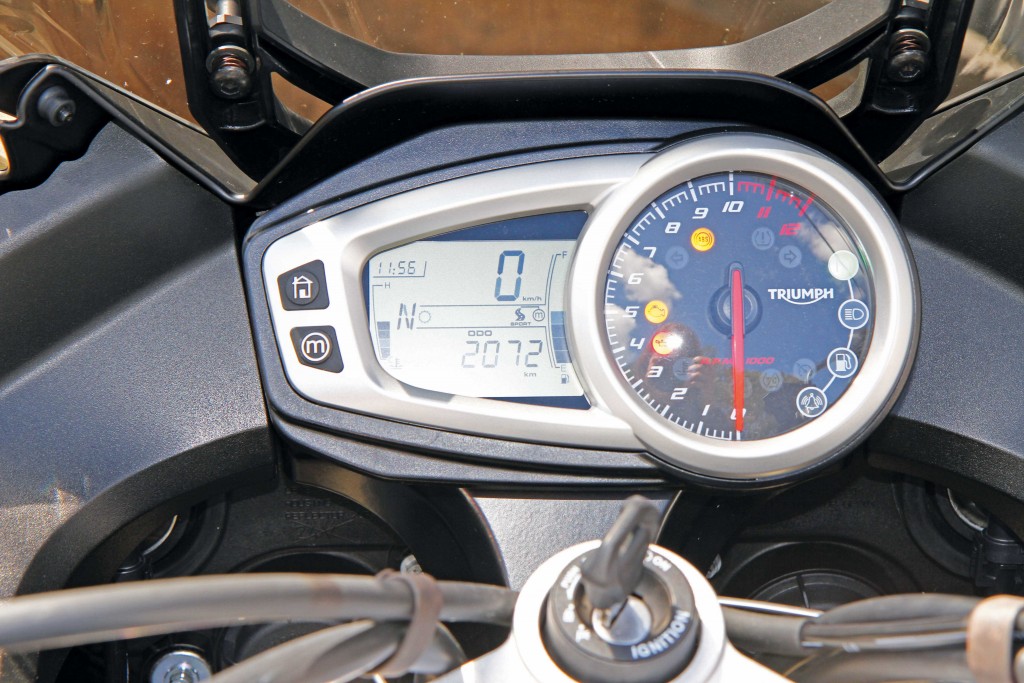 An added benefit of the new tech is a cruise control function which, unlike others I’ve experienced, actually performs so well it just begs to be used. In common with most systems that are activated by your right thumb, it can be difficult to maintain a consistent throttle opening while capturing the speed you want. However, where the Tiger scores bonus points is in its ability to easily trim the speed once you’ve grabbed it. The plus and minus buttons on the right switch-block not only step up and down in single kilometre-per-hour increments, but the dash changes to display the new speed you’re setting with each click; easy and quick. Having said that, this isn’t a function you’d realistically use much outside of a freeway environment, but on long trips it’s a real boon. Once it’s set you can simply relax your grip on the throttle (although if you push against the stop it’ll read that as a throttle input and deactivate itself) and let the bike do the rest. For a feature I thought I’d hardly use, it saw active service every time I left the city. 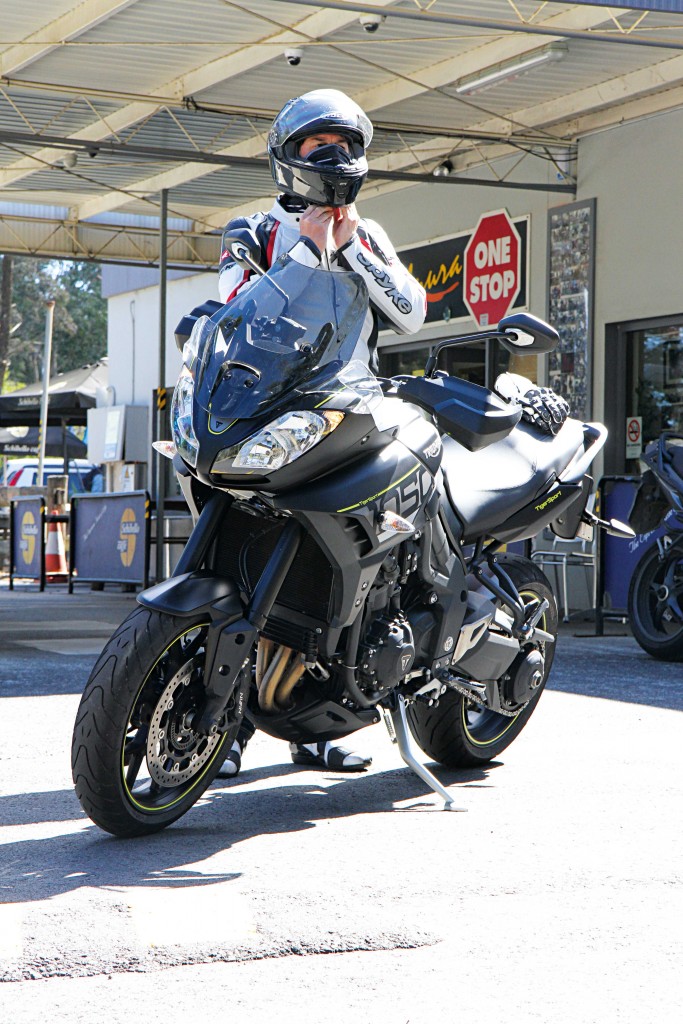 First impressions mean a lot when choosing a motorcycle and I was knocked out by the build quality when this turned up at my door. Our test bike looked mean and muscly in Matte Jet Black, with subtle Neon Yellow highlights on the bodywork and a matching stripe around the wheel rim — to my eyes way more striking than the other option of silver and red. If I was being picky the headlights could be more aggressive looking but more about them later. Our bike also came with the optional Arrow end-can which not only saves a couple of kilos but, with its carbon end-cap, looks way cooler than stock. The big angular tank and all that chunky bodywork topped off with an adjustable screen make it look like the Tiger’s 241 kilos (claimed, wet) might be a bit of a handful to manoeuvre about the place, but not so. The low centre of gravity means the bike hides its weight well and you only really notice the 20 litres of fuel when you go from bone-dry to brim-full. Overall the bike’s low-speed manners are utterly impeccable and you can wiggle it through the unlikeliest of gaps without needing to put a foot down. 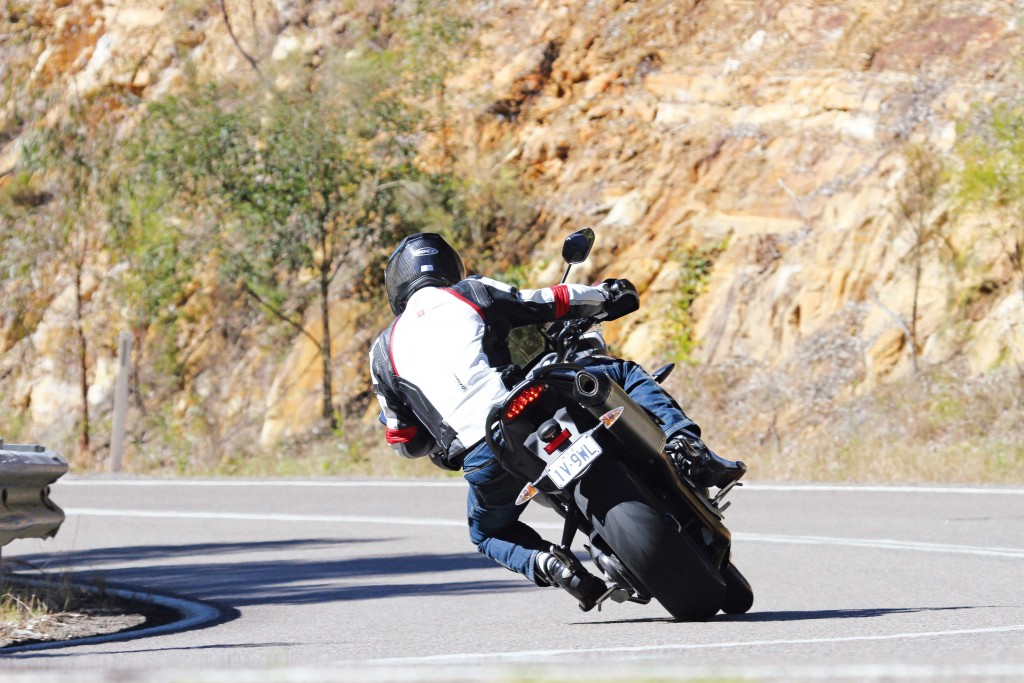 The seating position is absolutely spot-on for my five-foot-eleveness and at 830mm you don’t have to be a kung-fu master to swing a leg over it either. The one-piece saddle is well padded and there’s ample room to move about to not only help keep yourself comfortable, but to allow you to slide your bum backwards when you’re giving it some in the twisties, making hanging off easier. The reach to the ‘bars is perfect and the height very comfortable. At about 800mm wide from grip to grip, they generally fit between stationary cars with ease, yet give just the right amount of leverage and control. What’s more, at 100mm narrower than say the Caponord, they help make the bike feel smaller and less intimidating, especially welcome if you’re new to this style of machine.

The lightness of the controls doesn’t hurt in this regard either. The new slip-assist clutch is apparently 48 per cent lighter than the old model, is predictable, has a wide bite-point and makes the back wheel go round in a very satisfying manner when you dump it. In addition, if you turn the traction control off, a brief ping of the lever will allow you to carry the front wheel for a distance that suggests you might actually know what you’re doing. Similarly, the throttle action is nicely weighted regardless of the map you’re using and devoid of even a hint of snatch off the bottom.

The gearbox feels similar to the Speed Triple in that it’s accurate and clunk-free, except going from neutral to first, although the gear-lever itself seems unnecessarily tucked in, meaning you really have to twist your foot to get your toes under it. While I’m whinging, the mirrors also blur a bit at speed despite the super-smooth triple motor, and the headlights don’t work all that well when cornering at night. Their wide horizontal beam, which lights the curb nicely in a straight line and has good penetration, tilts down when you lean over, leaving the nearside edge of the road in the dark. 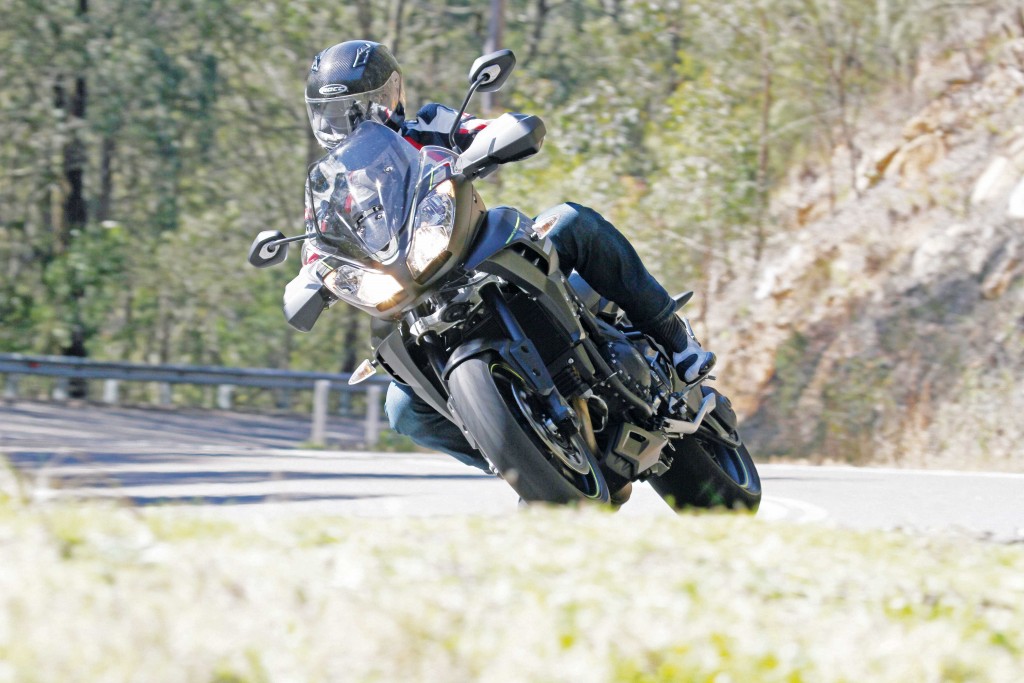 However, in truth these are relatively minor gripes: my biggest complaint by far would be the turbulence coming off the screen. It doesn’t knock your head around as such, but rather generates a lot of noise either side of your lid, despite the bike’s added deflectors up front. Ducking down a few inches puts you in a much quieter area but it wasn’t a position I could ride in, and this was with the adjustable screen at its highest setting. If my neck was shorter I wouldn’t have even noticed this trait, but even wearing earplugs the noise was annoying over time and without them was plain distracting, even at urban speeds and after trying two different helmets. 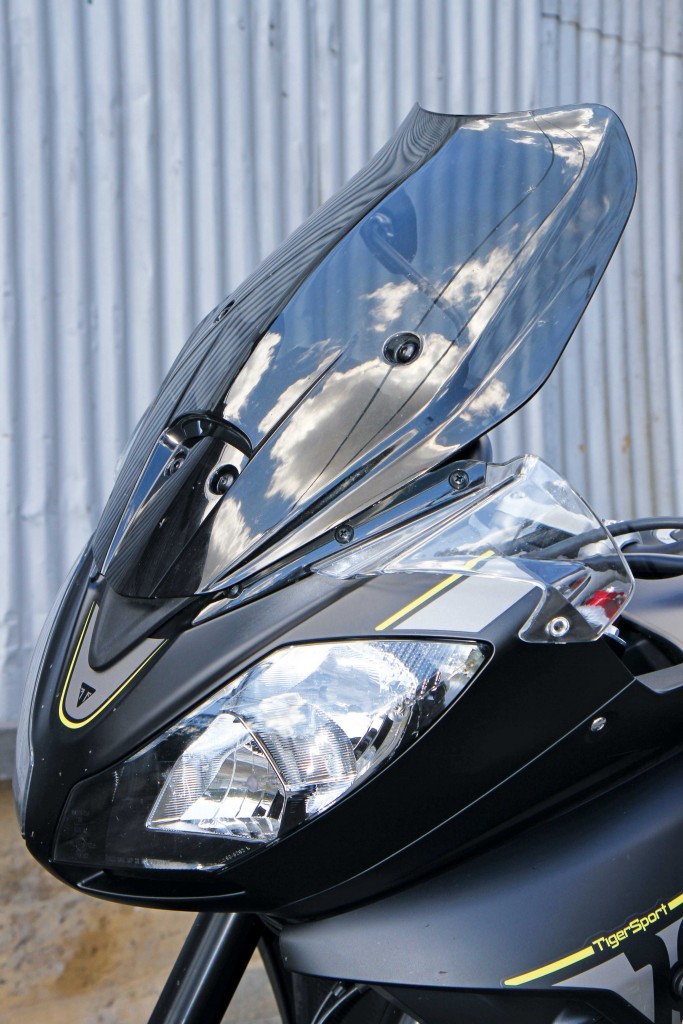 As mentioned, there are a lot of switches on this bike and it took me the better part of a week before I managed to prize an owner’s manual from Triumph Australia. With some stabbing of fingers you can chance upon the correct sequence of buttons to elicit the desired display and/or setting, but the whole process is far from intuitive. Not as far as say Donald Trump is from natural hair colour, but still I floundered around a bit. However, once the book of wisdom arrived, navigating through the many options became much clearer and more logical and I even managed to turn the self-cancelling indicators on. This is definitely one of those times when reading the instructions is worthwhile.

Now I may be at an age where I’ve grown out of my youthful obsession with sportsbikes, but that doesn’t mean I’m happy to pootle about on a wobbly old bus. For me, comfort may have become an increasingly important factor, but when the opportunity presents itself, I still get my kicks out of lean angle and corner speed just like the rest of us. In terms of handling, one of my favourite Triumphs has always been the Street Triple, which I found to be neutral and planted in about equal measure. The Tiger Sport might well have just taken that crown and its ability to blitz along a bendy road lies in the feedback and confidence it serves up, courtesy of well-thought-out geometry, great weight distribution and the frankly excellent, fully adjustable Showa suspension of which I cannot speak highly enough. It may be 26kg heavier and make 12hp less than the 1050 Speed Triple we tested recently, but through a given series of third- and fourth-gear corners, I doubt I’d be much slower on the Tiger and if the road was bumpy, maybe quicker.

As a category, Sports Tourers have often leaned more towards the touring side and perhaps should have more accurately been termed Tourer Sports in the first place. Lately, bikes such as the BMW S 1000 XR have redressed that balance significantly and the Triumph is part of that club too. If you’ve ever been put off owning a bike capable of serious touring miles because you’re afraid it might be too compromised everywhere else, point this bike at your favourite bit of road and think again, and between trips to far-away places, use it as an everyday commuter.

I saw a comment the other day from a guy saying how sick he was of reading that Triumph has the best bike in every category. Well I hope you’ve got a paper bag handy mate ‘cos when you take into consideration the ludicrously affordable list price of just $17,000, I reckon they might’ve just done it again.

More and more, do I find myself attracted to plainer bike gear. In fact, I’ve been known to spray paint my favourite lids flat black to hide the busy graphics. I don’t want flames drawn […]

Want something unusual, perfect for city riding which is fun and different? Maybe the Husqvana Svartpilen 701, which is now available in Australia. Here’s the press release from Husqvarna:   Husqvarna Motorcycles Australia’s Real Street […]