If we needed an excuse to go for a long ride, we had one. Friends had bought a farm in south-west Queensland, so we planned an inspection for a couple of months ahead. We’d go the slow way, well, it was mostly over dirt roads and they turned out to be slow because it had actually been raining and there was water over parts of the road and there were slippery holes in others.

Six of us left Griffith for the first night’s camping in the vicinity of White Cliffs after getting together the previous night from various parts of the State. 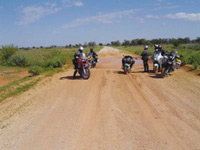 Of course, rain, dirt roads and big bikes don’t always go together well, so even while enjoying the unbelievable green on the way to Hillston, and the occasional shower, we had some trepidation about the Mossgiel road. This is truly, as the sign says, impassable when wet.

The western areas have been in drought for the past 3-4 years, which accentuated the green, and after donning the wet weather gear before Hillston (for once deciding to put it on before we were properly wet) we got to our coffee stop in the main street only to shed the wet weather gear as the sun beamed in between showers.

Hillston these days is the hub of the south-west on the Lachlan, which is the lifeblood for agricultural industries in the region such as cropping, grazing, cotton, citrus and grapes, potatoes and so on.

Exiting Hillston, it was green in every direction. Thankfully the road was dry when we got to the dirt section to Mossgiel and we made good progress. Three 1200 GSs, an 1150 Adventure and an 1150RT plus a Harley all behaved well on this loose, gravelly and tracked surface and though the roadies were a little slower, surprisingly they caught up after a few minutes even though travelling slowly was the idea.

A place to stop if you haven’t been there is the turn to Willandra National Park, with good camping and a historic homestead and a good change of scenery. Also, many of the tracks in this area offer entertaining rides if you don’t mind dirt and sandy roads. 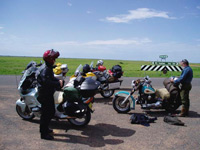 After brief stop at Mossgiel, it was tar to Ivanhoe and fuel with friendly locals. Through to Wilcannia there were some slippery roads after the showers, so steady was the name of the game after a few sphincter tightening front-wheel slips on the clay roads. These roads always demand concentration to avoid hitting the hopping fauna. After careful consideration for five seconds you would deduce that travelling in the dark was a distant second option to sitting in a pub or camping with a quiet beer.

On this particular trip there was very little animal activity, as most were away from the road chomping on the abundant feed. You still need to be aware of the occasional stupid roo on the road that’s out to get you. After numerous “moments” dodging showers and wet and dry bits, it dried out a little with all of us surviving to the tar and then Wilcannia.

Wilcannia was quiet and after deliberation we continued on to our expected camp near White Cliffs, with newly acquired liquid refreshment. There had been no shortage of volunteers to carry it.

There was water in the creeks, which was almost unbelievable. Water had been well over the road in places, so after examining some camping spots it was with discretion that we found a nice rocky hill on which to camp. This was next to an old opal mine which suited the swags but made it a bit hard to get tent pegs into the ground, much to the tent owners’ indignation. Later, over a meal and around a fire lubricated imaginations retold the trip to this place.

It certainly is open in this area and you have no crowded feeling. No traffic, no fences and very few buildings, so we sat on the hill and watched storms move around us with the fire warming us up nicely.

Next morning the weather had cleared for our appearance in White Cliffs for food and fuel. The Outback seems to stretch beyond White Cliffs, with the many opal mines providing a peppered landscape and interesting houses underground. The underground motel and museum is worth a visit but we were surprised to see postie bikes all over the place with flags and spare bikes on their way to Adelaide from Brisbane for charity and a good time.

North to Wanaaring showed again the wide open spaces following gravel roads with bends leading to the river road that had many areas with water over the road. The best approach was around the pool edges on the road and this was pleasantly followed by grassland with patches of timber and opening to wide sandy roads lined with scrub.

Concentration was the order of the day here as the wind increased, blowing clouds of sand up and across the road so that you were unable to see some of the washaways which tended to clunk the suspension and bend a BM wheel or two.

Wanaaring cafe was a pleasant interlude with good burgers, then we continued to the border gate and Hungerford pub. This oasis is older than you expect and considering the sandblast wind and storms coming it was a XXXX relief.  We’d heard that this was the place to be and our expectations were fulfilled. The rain came and flooded the roads we had just been on and we got properly relaxed in the friendly atmosphere. 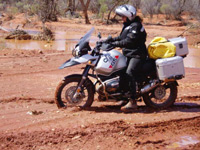 The “back way” (we enjoy punishment) to the property was rougher than expected and was covered in many places by water with slippery wheel tracks in the centre. However, all managed well in the end with only a couple of slow tipovers and no damage, although a Harley and RT ploughing along in these muddy conditions was a sight to see. The GSs still have a habit of ploughing the front wheel occasionally (to be fair, with road tyres) in the slippery conditions, which tends to increase your concentration as you prepare for the jump.

Finally we got to the farm and found that these are very large in this area and have been dry for half a dozen years. Goats seem to thrive in these conditions like no other stock and so have been a boon to growers to help them survive. Goats eat almost anything, so logic suggested that we should eat one of them. None of us had tried goat before. It is clear why goat is so popular, as the roasted item was excellent. Their diet of rocks, trees and bore water must do the trick.

The Eulo store is the first I’ve seen with complimentary tea and coffee and a true shop with everything. Then it was on to Cunnamulla, with the road kill carcases on the road edges providing caution and continuing on to Bourke without problems, though all of us were finding the Kidman Way a little boring after our previous few days. It was a relief to be just touring, though.

It was really pleasant towards Cobar with the green pastures out into the distance, then to Lake Cargelligo with the lake full for the first time in four years. This, then, was the time for all of us to go our separate ways. The memories of this trip will provide the incentive for the next one.