Not comfortable with the idea of belt drives? Here’s all you need to know

Mitch Hedberg once said, “My belt holds my pants up, but the belt loops hold my belt up. I don’t really know what’s happening down there. Who is the real hero?”

That’s a very apt observation when it comes to discussing the optimum operation of belt drives, because without the steadfast sprocket your belt won’t work as it should.

We gleaned most of the following good advice while attending a Harley-Davidson University Training School for its technicians recently. It was an eye-opening experience all round. Notably, training guru Charlie Palmer was eloquent in praise of the humble belt because, as he said: 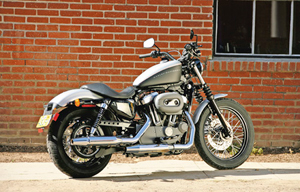 And today’s belts, made from Kevlar and carbon fibre, are Superman strong. Charlie says that on the US travelling bike show circuit, Harley routinely suspends one of its full dressers from the ceiling by a drive belt! We are convinced.

So what can go wrong with this simple but crucial belt/sprocket team?

Drive belt sprocket alignment must be spot on
If the sprocket is misaligned it causes distortion of the belt and uneven distribution of the load, resulting in premature belt failure. Misalignment will affect belt tracking, resulting in severe belt edge wear, sprocket flange wear and noise problems.
Customisers who fit their own belts, be warned! Instead of taking a punt on whether or not to use a particular after-market belt, ask your local Harley dealer to specify the correct belt for your custom beauty.

The rear axle must be aligned correctly
If the axle is out of alignment it will tilt the wheel sprocket, resulting in all sorts of issues. Be compulsive about aligning your axle. (V-Rods have cammed rear adjusters, which help.

When should you replace a belt?
Harley-Davidson does not specify when a belt should be renewed because it depends on where you ride.
If you ride mainly on paved roads with no grit or sand then you could expect 160,000km from your belt. Riding on unpaved/gravel roads will drop durability down to 60,000–90,000km. The best figure Charlie Palmer ever encountered was a bike that ran 280,000km on a single belt and sprocket set!

Many failures are also influenced by riders removing the belt cover/guard. Harley-Davidson warns against this, since your belt warranty will be void if you do it. 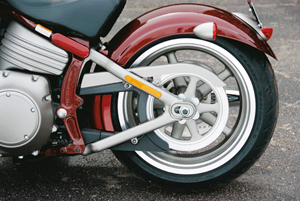 Just like a chain-driven bike, if you wear the belt, you’ve probably worn the sprocket. Replace it at the same time; otherwise you’ll shorten the life of your brand new belt!

The belt-versus-chain debate has long been put to bed because belts have proved to be more economical than chains in the long run, especially when you add up the cost of chains, sprockets and chain lube.

Speaking of sprockets
Rear sprockets are another trap for the unwary. Harley-Davidson die-casts its sprockets from aluminium with the teeth receiving hard chrome plating to protect them from abrasive wear.

But aftermarket sprockets are not plated and, according to Charlie, will last only 10,000km.

Examine your sprocket
If there is bad pitting, sharp corners or heavily worn teeth — replace it!

If you are going to be riding in the Never-Never, you can get an emergency belt kit that allows you to splice a broken belt on the spot. Be aware that these kits are intended to get you out of a jam; they are not a cure. Once the belt is spliced, you must ride slowly and limp home.

If you’re stuck on the motorway with a broken belt, phone for help.

Belt tension
Read your manual and know the correct tension for your particular bike’s belt.
Belt tension should be done when the belt bike is cold and adjustment should be made with the weight of a rider on the bike.
At the lower strand, midway between the transmission sprocket and the rear wheel sprocket, apply 4.5kg of upward force on the lower run of the rear belt. (Harley has a belt tension gauge just for this job.
Belt deflection is measured at the rear sprocket and you must check it several times, each time by rotating the rear wheel. With the sprocket rotated to the tightest belt position, belt deflection should be 5/16 to ⅜in (between 8 and 9.5mm, as close as we can work out).

Trick of the trade!
For a high-horsepower engine it’s better to have the belt a little tight rather than loose. A loose belt will break much more easily than a tight one and most people do not tighten the belt to its proper tension. If you plan on “racing” or hot-rodding your bike, invest in a Harley-Davidson belt tension gauge.

Stop whining, boy!
Riders will often comment about belt whining noise. This is a common characteristic caused by cutting the throttle when backing up or when the belt is wet. Don’t worry about it.

However, if the belt “sings” or “whines” on a steady throttle there could be some interference between the wheel sprocket grooves and the drive belt teeth.

Charlie says that custom billet sprockets you buy off the shelf from another manufacturer can also whine.

Another noise factor is called strand resonance, where power pulses can excite the belt strands into a sinusoidal wave at certain engine speeds. This problem is often caused by an under-tensioned belt.

If you hear a loud noise or experience a jerk in the drive then, despite the guards, you’ve probably caught a stone in the belt. The jerk is the belt trying to eat the stone!

Another cause of a loud noise is missing or cracked sprocket teeth. If you hear the belt pop, it has been permanently damaged.
Whenever you hear a noise, notice what you’re doing at the time. Are you lugging the bike? Give all this information to your Harley service writer, or ask to talk to the technician rather than risk a misinterpretation of what you’re saying.

Other issues
Handle new belts with care. Don’t bend, twist, coil or back-bend, squeeze at the ends or turn the belt inside out.
Don’t opt for a too-small front sprocket or you will shorten the belt life.

Never force a belt onto a sprocket or you will damage the edge cord.

If you’re installing a belt yourself, install it so the logo can be read when you’re standing next to the bike.
Belt cleaning and care

You might not have to mess with chain lube but you still need to keep an eye on your belt.

The best way is to either wipe it with a clean rag or spray it with a solution of soap and water. (Never immerse it in water.) Dry the belt by wiping or blowdrying it with an air hose, but avoid the sides.

WD-40 is a good way to remove tar from belt drives as long as it is washed off afterwards.

You will hear apocryphal stories of people using their granny’s dripping or lard to lube belts. They don’t need lubing.

Hopefully, you will now have a better understanding of the belt drive, whether you ride a metric or American motorcycle. And if you have any questions, ask your local dealer.

* Our thanks to Harley-Davidson Australia for assistance with this article.