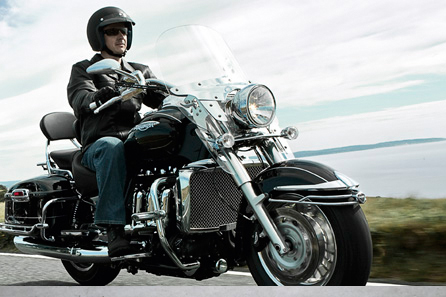 A bike for exploring the galaxy

Unlike the Triumph Rocket III, which mimics the now mothballed Space Shuttle in launching like a scalded cat, the “detuned” Triumph Rocket III Tourer more resembles the giant Apollo mission Saturn V rocket that used to claw its way into space in a stately tower of power. It depends on the mission.

The Touring Rocket III with ABS is physically big. It has an enormously wide saddle and your legs are spread wide as they straddle the tank. Trying to unleash a 2.3-litre engine while sitting like a professional bull rider doesn’t suggest easy cruising. But let’s see.
How detuned?

The obvious bikes to compare against the Rocket III Touring are the Harley-Davidson Road King, Victory Kingpin Tour, Kawasaki Vulcan 1700 Nomad, Suzuki Boulevard C109RT and the Yamaha Roadliner, all of which are powered by vee-twin engines. The Rocket III Touring shakes the “establishment” by using that wonderful three-cylinder lump — but then again the Rocket III has always “gone its own way”.
The Tourer version makes 78kW of power @ 6000rpm and 203Nm of torque @ 2500rpm. (The Roadster makes 109kW @ 5750rpm and 221Nm @ 2750.) Initially, I missed the extra snap of the Roadster, but the bike still has incredibly alluring power and plenty of grunt. Twist the right wrist and you get a rush of blood as all 2.3 litres come to life, while the exhaust’s deep notes play jungle music in your gut. Any muscle car fan will understand the appeal. 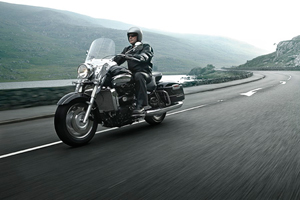 Once I got my head around the fact that these two bikes aren’t competing for the same type of buyer, I really started to enjoy the experience, travelling slower and taking the time to look at what was passing by. All that laidback riding made me reach for cruise control, but there isn’t one and it’s not offered as an accessory. If you buy a Tourer it should be easy to find an aftermarket kit.
The reduction in power over the Roadster seems to have taken some stress off the drive train. You can happily ride the Touring on the torque curve, short shifting into top gear under 60km/h and stay there all day.

The clutch lever is heavy (like every other Rocket III) but the gear change is wonderfully smooth with virtually no backlash through the shaft drive. A flat heel changer and floorboards improve comfort. Some heel changers tend to restrict how much you can move around, and with huge hooves like mine you need all the room you can get.

The riding dynamic of the Touring is completely different from the Roadster’s. It’s relaxed from the off with a better seat and easier-to-reach bars, although if the bike were mine I would play around with the bar position, which is OK for the most part but to be more comfortable I would consider a set of bars with a straighter angle.

Alana says the Triumph’s pillion seat is one of the best she has ever experienced — natural and like sitting in a comfortable chair, so your constant companion won’t be ear bashing you at the end of the day’s riding.

Range from the 22.3L tank gives you about 290km, making fuel consumption 7.68L/100km on premium unleaded. A medium-sized screen looks the goods and works reasonably well, if you are under 190cm that is. Taller, and you will suffer some buffeting. The screen is held in place by a spring-loaded mechanism so you can remove it in seconds because you want a different look or to clean it or swap for a different size. 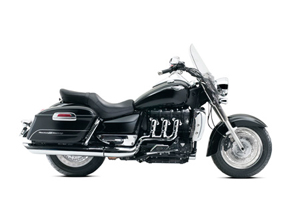 The bike’s design is bang-on and is even better looking than pictures can convey. The sparkling black paintwork with hand-painted pin-striping complements the flow of the bike. The wheel design evokes the fins on old drum brakes, giving the Touring a ’50s feel.
To allow for panniers, Triumph reduced the width of the rear sub-frame and fitted a 180-section tyre rather than the 240 fitted to the Roadster.

At the front Triumph has sharpened up the steering by reducing the rake a tiny bit, which helps with slow-speed manoeuvring, as well as high-speed handling. Riding two-up I found it easy to make tight U-turns and the bike was extremely stable at speed with Alana onboard.
The big deal on this new bike is the introduction of anti-lock brakes. The rear gives a firm pulse through the pedal while the front lets the bike move around a bit — but what do you expect from such a large machine? Overall, the ABS system works as designed and it’s a welcome addition to a big bike like this.

If you love chrome then you will relish the 73+ genuine accessories on offer — most of them chrome enhancements. My choice would be the front tip, handlebar clamp, headlight visor, backrest (yes, this is a great accessory), “140 Cubic Inches” embellisher to really advertise that this is a mean machine… and the list could go on, but one accessory I think should be standard is heated grips. A set costs $244, but really, this bike is presented as a “touring” machine and heated grips should be standard.
What do I think?

The Rocket III Touring’s visceral appeal matches its visual statement and that enormous engine delivers as advertised. The “touring” part of the mission seems to be in place as well with my pillion effusive in her praise for its comfort. As well as all this, I’m sure the added safety of ABS will entice many riders to make the Rocket III Tourer their long-distance vehicle.
T-minus four minutes and counting… 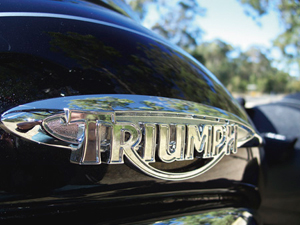 Initially, I missed the extra snap of the Roadster, but it still has incredibly alluring power and plenty of grunt.